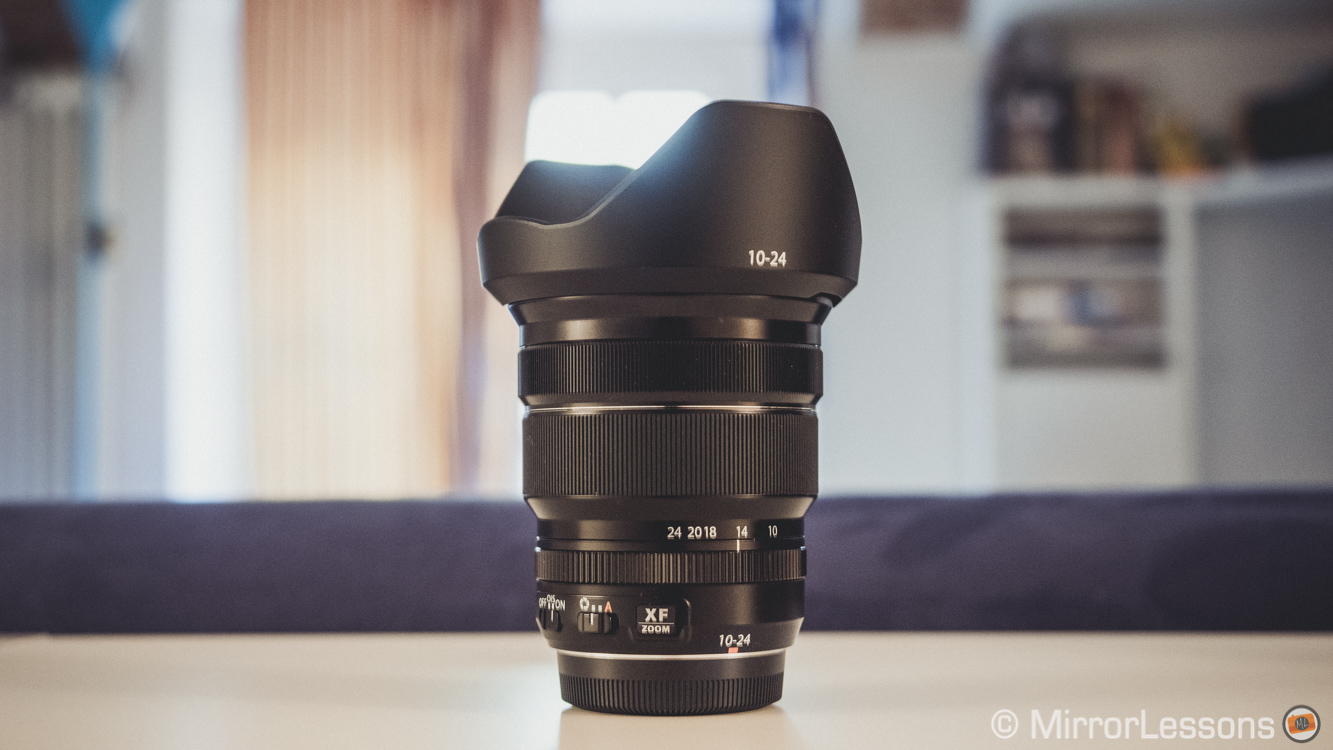 We bought the Fujinon XF 10-24mm with the Fujifilm X-T1 six months ago and it is the lens I have used the most on the X-T1 since then. I’ve always loved wide-angle lenses, with a personal preferences for fixed focal lengths. This is why I always thought that the XF 14mm f/2.8 I tested on the X-Pro1 last year would be my ideal choice, but after using the 10-24mm extensively, I am not so sure about this anymore.

The XF 10-24mm f/4 has a very nice metal build with plastic caps and a relatively small plastic hood. Despite its size, it is lightweight at only 410g. It remains well-balanced on cameras like the X-T1 or the X-E2. If you want to use it on an X-Pro1, it will partially block your view through its optical viewfinder (especially with the lens hood), so you’ll be more tempted to use the EVF.

Both focus and zoom rings are smooth and easy to turn. I personally really like the soft rubber that covers the zoom ring. Like many XF lenses, the 10-24mm also has an aperture ring that can be turned in 1/3 steps. It has the same problem I’ve seen with other Fuji lenses: the ring is too easy to turn and you will sometimes find that your aperture has changed inadvertently. Another thing that is missing are actual marks for the aperture value like on Fuji prime lenses. I really don’t understand why Fujifilm puts them on prime lenses but not on zoom lenses. Especially with a camera like the X-T1, which has dials for all the important settings, it is a shame that the only vital setting you need to check on the LCD or EVF is the aperture.

The 10-24mm has an internal zoom mechanism and as such, the lens’ dimensions don’t change when zooming in or out, which is another sign of the good build quality. It also has two dedicated buttons on the side to switch the optical stabilisation on or off and to switch from manual to automatic aperture control.

If I had to summarise this lens in one sentence, I would say without a doubt that it is the best wide angle zoom lens I have ever used. It delivers sharp images with relatively well contained distortion even at the shortest focal length.

The XF 10-24mm is sharp at the center starting from f/4 all the way up to f/22. This applies regardless of the focal length or aperture used. It is sharp all the way.

At 10mm the corners are slightly soft and lack some contrast. It happens at every aperture but you will notice it only when pixel peeping at 100% so it isn’t really an issue. As soon as you zoom in, it becomes almost unnoticeable. I haven’t found any vignetting nor a trace of chromatic aberration or colour shift.

The lens handles geometric distortion pretty well considering that 10mm corresponds to 15mm on a full frame sensor. Of course the way it handles distortion also depends on your composition, your position relative to geometrical lines and the overall distance as well. Below you can see some examples of buildings and interiors taken at 10mm. For the first shots, if I had been higher than ground level, the distortion would have been less important and the buildings would have appeared straighter and more vertical. If you know how to master this focal length and are in an advantageous position, it can work very well even for architectural interior photographs.

The nature of this lens and the f/4 constant aperture make it very difficult to achieve any kind of shallow depth of field. Personally, the idea has never even crossed my mind as the lens has been designed for other things. It has a minimum focus distance of 50cm that becomes 24cm when the macro mode is activated. I think it is a non-essential feature that you might end up using only a few times.

The maximum aperture of f/4 can be limiting in low-light conditions. We recently experienced this during a wedding where the house of the bride was dark with very little light coming in from the windows. I guess Fujifim designed it as an f/4 constant instead of f/2.8 to keep the size and weight down.

But this doesn’t mean that the lens cannot be used in low-light. This past summer I used it for start trails. Even though it would be more advisable to use a faster lens for this kind of photo, the result came out very well considering that there was also light pollution.

The autofocus works beautifully, proving itself worthy even for action shots. It can be a very interesting lens to use for sports when you want to have the viewer feel very close to the action. Adding a panning effect can add a hint of creativity too. Given the very long depth of field you will get all the time, it is also difficult to end up with an out-of-focus image, especially when used at f/5.6 or f/8.

The inner focusing system is very silent. The lens also includes optical stabilisation and it works really well. I have to say that it is easier to get sharp results with slow shutter speeds combined with a short focal length as the micro shakes are less magnified compared with longer focal lengths. I managed to get very sharp images down to 1/4 of a second without having to retake any shots.

I couldn’t recommend the 10-24mm more highly to Fujifilm users who appreciate a versatile wide-angle lens for landscapes, architecture and other genres. While certainly bigger and slower than the XF 14mm f/2.8[], it is far more versatile and allows for further creativity. The image quality is also nothing short of impressive. The 10-24mm is perfect for many genres, and could easily become a lens that you keep mounted on your camera for various situations, while with the 14mm, I would inevitably feel the need to switch to a longer focal length on certain occasions.

What do you think of the XF 10-24mm f/4? If you’ve taken any shots with it, feel free to share them in our Google+ Community!