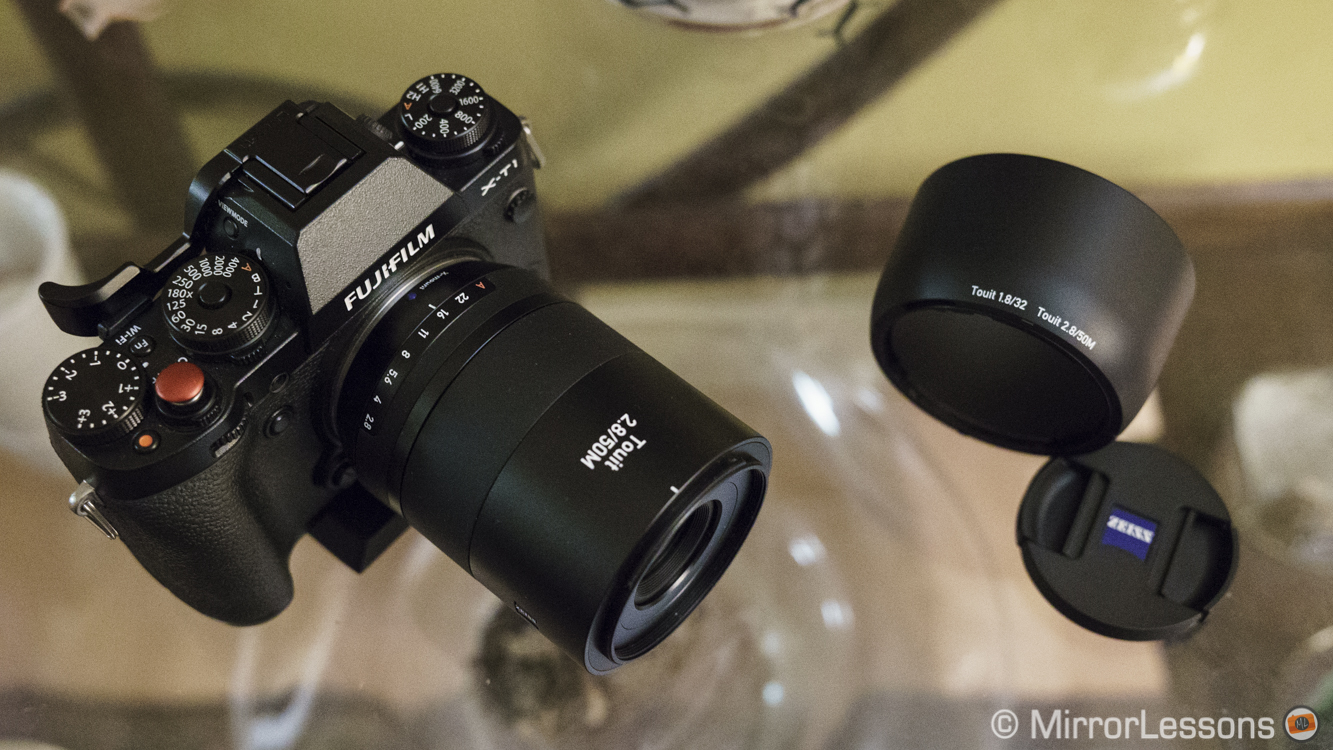 The Touit lenses designed for the Fujifilm X series haven’t been very successful so far and I feel that there are various reasons for this.

Secondly, there is the fact that while the name Zeiss is synonymous with high image quality, Fujifilm has also managed to construct a very good reputation with its own line of lenses.

Finally, Touit lenses have been designed for two systems (Fuji X and Sony APS-C). When this happens, products often end up being more successful on one system than the other, regardless of actual performance. I personally find a lens like the 12mm f/2.8 more attractive on the Sony APS-C system, for the simple reason that it doesn’t have any native wide angle primes.

The Touit 50mm is the third lens released by Zeiss and has an advantage because it is the first macro lens to have a 1:1 ratio for the Fuji X system. This argument alone makes it stand out from the other two Touit lenses, but we still have to see how well it performs…

Ergonomics and ease of use

The Touit 50mm is very light even without being the smallest lens for the Fuji X system. It has a nice metal build and the provided lens hood is made of plastic. 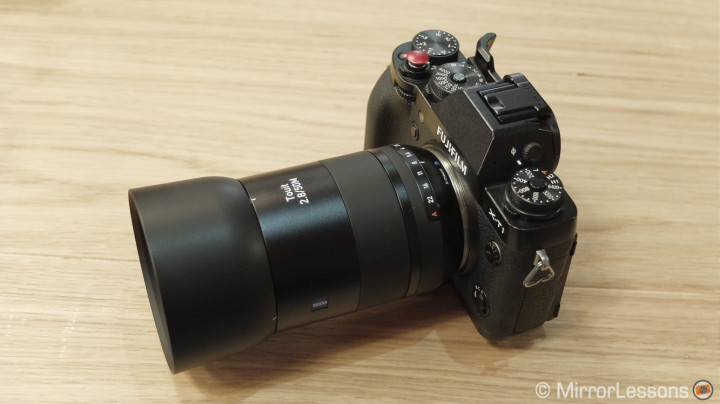 The focus and aperture rings are covered by rubber which adds a very nice feeling when using the rings. It is also a nice addition when shooting in cold environments without gloves. However, they inevitably attract more dust. The two rings are smooth and precise to turn, though the absence of a purely mechanical focus ring can make manually focussing at a very close distance less precise. The aperture ring can be turned in 1/3 steps. Note that the aperture ring is only present for the Fuji X mount version and not the Sony E-mount version.

N.B.: With the exception of the marathon pictures, all images have been exported from RAW using Lightroom 5.7. For most of them I applied some sharpness correction to bring back the details that Adobe Camera Raw loses when rendering Fuji RAF files.

The Touit 50mm macro has an equivalent focal length of 75mm (on 35mm format) with a 1:1 scale and a minimum focussing distance of 15cm, so the actual capabilities of focusing close to an object are good. However you won’t be able to take macro details of an insect for example as the focal length is too short.

However, Fujifilm recently announced a series of Macro Extension tubes that work with all X mount lenses. There are two models, the MCEX-11 and MCEX-16, which deliver different levels of magnification. I got the chance to test the MCEX-16 at a recent Fuji Touch & Try event at the Riflessi Store and it works really well. I was able to shoot at a minimum focus distance of 2/3cm average. I took a few test shots that you can see below. The first is Heather’s pupil and the second is a detail of the lens cap. The pupil looks soft because I was manually focusing and at that distance, unless your subject is dead still, focusing is quite a challenge.

Overall the Touit 50mm delivers very good image quality that a Zeiss connoisseur would certainly appreciate. First, let’s talk about sharpness since it is a macro lens. Performance is already great at f/2.8 and reaches its peak at f/11. Of course here depth of field plays a very important role when focusing close. At fast apertures like 2.8 you might not get almost anything in focus like the example below.

This also means using slower shutter speeds. Since the lens isn’t optically stabilised, forget hand-held work: you need a tripod. Sharpness is good at all apertures except f/22 where it is noticeably softer.

Since the rain hasn’t stopped during the past two weeks, I decided to perform some homemade still life tests by using random light sources and objects I could find around the house. (I don’t own a proper studio and proper flash lights … yet!) Inspired by a great article I read on fstoppers, I used an Ikea lamp, the Olympus Fl-600r and the Nissin i40 with their LED lights as my light sources, and three basic sheets of A4 paper to diffuse the light. For the ring shots, I placed the object inside a cylindrical green glass vase. While these shots are far from perfect from perfect from an lighting point of view, it does show that the Touit 50mm is a very capable lens that can work well even for professional use.

The lens gives colour and contrast a very “modern” rendition in my opinion. Colours are vivid and powerful when combined with the Fuji X-Trans sensor and can deliver very powerful results. The look is also contrasty which delivers very dynamic images overall. The lens has Zeiss T Coating that reduces flare and chromatic aberration and the lens works well in this regard. I haven’t found any trace of CA and flares are well-contained.

The 75mm equivalent focal length suggests that the lens can also be a good option for portraits. However the 2.8 aperture is somehow limiting for those who desire more shallow depth of field. What’s more, the look isn’t as soft as a proper portrait lens, and will give you a more contrasted result with perhaps excessive detail rendering. The Touit macro certainly can’t compete with the Fuji 56mm f/1.2 but it can do the job as you can see from the samples below. In short, I wouldn’t advise that you buy this lens only for portraits especially when you can get the wonderful Fuji 56mm f/1.2 for the same price.

Of course nothing is stopping you from using the lens for some landscape work or general photography as well if you like this kind of focal length, but to me its main purpose is its macro capabilities.

The lens’s autofocus performs well overall but it isn’t the fastest I have tried on the X-T1. Often it will make a quick back and forth movement before locking, especially when you reduce the focus distance (for example from the background to an object in the foreground). The performance doesn’t decrease when focusing really close unless you are verging on the minimum focus distance of the lens. But at that point it is hard to judge the performance because you might be slightly under the limit, causing the lens to not focus correctly and do the classic back and forth movement throughout the entire focus distance range. As such, if you are close to 15cm, it is advisable to switch to manual focus and use the focus assist (like magnification) to be sure of where your focus point is.

The AF performed well with the MCEX-16 as well. The focus motor of the lens isn’t silent though–you can clearly hear the mechanism when focusing.

Heather also tried the lens during the Turin Marathon (I was testing the Fuji X30 for the same purpose). While this lens is certainly not designed for sports photography, it worked very well in AF-C mode on the X-T1 most of the time.

Neither the Touit 50mm nor Fujifilm cameras are optically stabilised so beware of shaky images. I found that even 1/50 wasn’t safe enough on some occasions. As I said earlier, this is a lens that most of the time will require a tripod to get sharp macro shots.

The Zeiss Touit 50mm 2.8 Macro is a very nice lens capable of delivering excellent quality. It is very sharp, has good close-up capabilities and good AF performance. I could not find a flaw during the time I tested it. The rubber covering both the aperture and focus rings are nice to use, and the lens is very light and therefore easy to carry. Since it offers a 1:1 scale ratio for macro work, it is perhaps the most interesting lens out of the trio for the Fuji X system so far.