You are here: Home / Accessory Reviews / Review of the Lollipod – The “take-with-you-everywhere” tripod for small mirrorless cameras 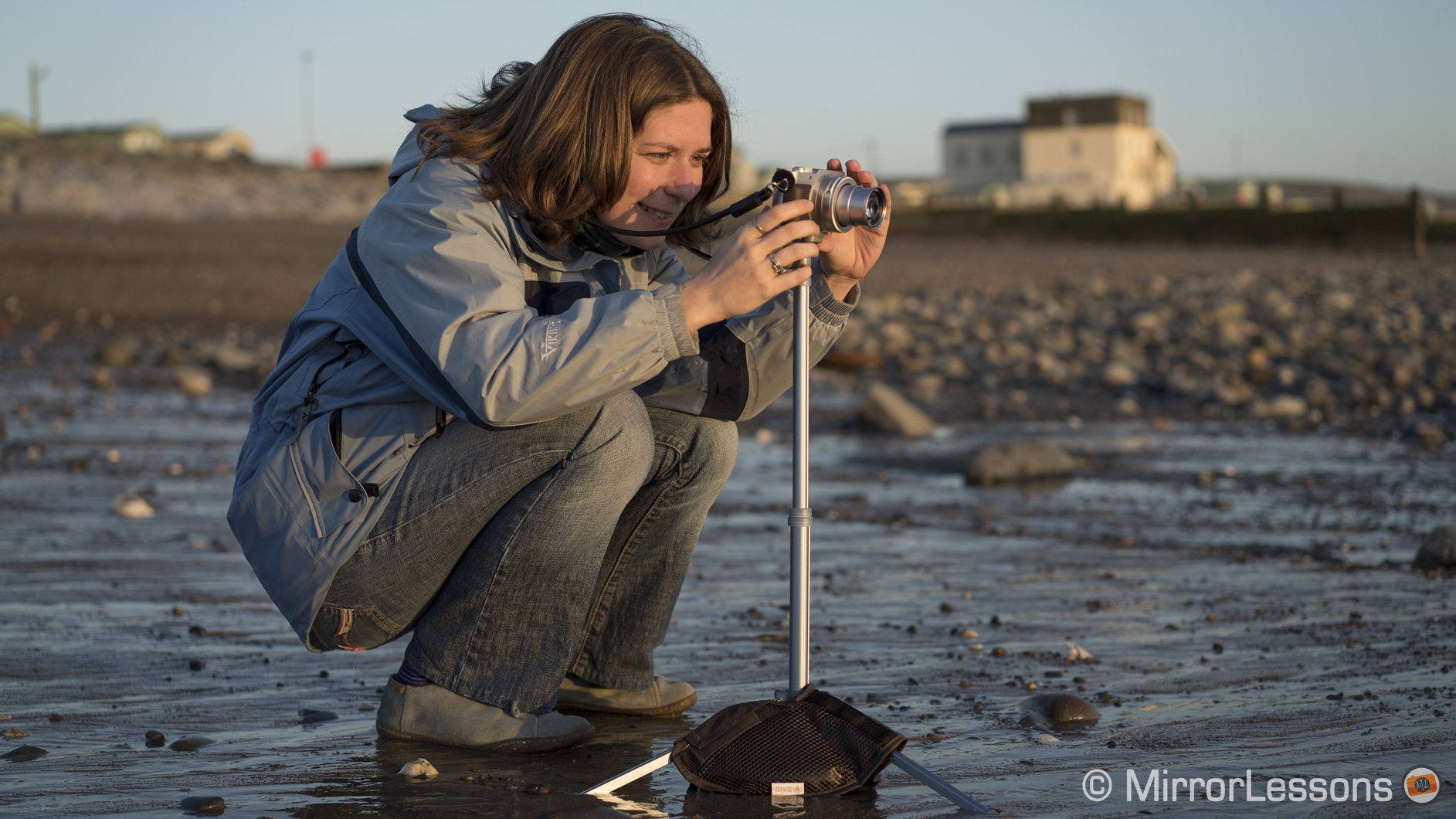 When you hear the name Lollipod, it is difficult to suppress the urge to start singing that catchy 1950s tune by the Chordettes. Now that I’ve got the song permanently stuck in your head, we can take a look at the tripod that is as “lightweight” as the song it brings to mind!

The Lollipod is a casual carry-around tripod constructed from pure lightweight aluminium and hardened plastic. It has been built to support any camera or smart device that weighs less than 420 grams, including smaller mirrorless cameras such as the LX100, RX100 series, X30 or G7X.

Based on a photographer’s light stand, it has three short legs and a long pole that extends to a height of 113 cm. Included in the package are a net carrying bag and a stabilisation net that sits under the tripod legs. You can choose between six jolly colours.

At a mere 320 grams and 32cm in length when retracted, the Lollipod is the lightest, most portable tripod we’ve ever tried. It comes with a handy net bag which you can use to either store the tripod or carry it around via a clip that attaches to belts, zippers and bag handle attachments. I personally found that latching the bag onto my coat pocket zipper was the most convenient solution for when I was out walking.

The fact that it is so small and light means that you will be more likely to take it out on walks or pack it in your hand luggage for short vacations. When it is attached to my coat, I barely even notice that I am carrying it.

The Lollipod is practical for some applications, but less so for others. This is due to the very characteristic that makes it so appealing – its lightweight build.

First of all, even a moderate wind will cause the tripod to sway back and forth, particularly when it is extended to its full height. The same happens when you press down on the shutter release. I thought that a 2-second timer might solve the issue of the micro-movements generated by my hand, but even then it would continue to sway long after I’d pressed the shutter button.

For this reason, I only ever extended the tripod to its full height for shots where I would have normally used a monopod. It worked quite well for bracketing for example.

The swaying was greatly reduced however when I retracted the tripod to half its full height, and it disappeared completely when I used only the bottom pole. Both long exposures and time lapses are possible when the tripod is set to its minimum height on a calm day.

Another point in its favour is that you don’t have to twist the camera onto the mount. Instead, you set the camera on top of the mount, align the tripod head screw with the receptacle, and rotate a dial on the side which locks the camera in place. Attaching a camera to a tripod head has never been easier.

I was also surprised to learn that the Lollipod can be used in both landscape and portrait modes thanks to its very flexible tripod head.

I won’t mince words in this section: if you are looking for a tripod that will last you years and stand up against even the harshest weather conditions, the Lollipod is not for you. Rather, it is an inexpensive solution for people who want a little more stability than a hand-held shot would give.

While the aluminium poles and plastic joints seem durable, the knobs that adjust tightness are notably more fragile. For example, the knob that adjusts the position of the head developed a crack down the side when I tried to tighten it the first time I used the tripod. It is still usable but I’ve learned not to strain the knobs too much.

The most durable part of the Lollipod is most certainly the tripod head itself. It is made of hardened plastic and features a flat layer of textured rubber around the screw to protect your camera and keep it in place.

The Lollipod has been designed to support a maximum weight of 420 grams but it is possible to use slightly heavier cameras as long as they have small and flat primes. I had no trouble using it with the X100T, for example, which is 440 grams. In the case of larger premium compacts with zooms like the LX100, the tripod head will slump a little under the frontal weight if you fully extend the zoom, changing your composition.

Is it easy to use?

The Lollipod is very easy to use and adjust. The aluminium poles slide up and down very smoothly and the legs are easy to extend. Since there aren’t any tightening mechanisms on the legs or poles, they rely on friction to stay in place.

The additional stabilising net is also easy to attach. You simply slide the three plastic hooks into the holes on the legs and fill the net with heavy objects like rocks or sand. The net will stop the tripod from blowing over but won’t stop it from shaking.

Note: if you want even more stabilisation for the lollipod, or any tripod for that matter, you may also want to consider the InspiredPhotoGear WaterWeight (pictured below). Fashioned in a doughnut shape so that it slides onto your tripod, it can be filled with either water or sand, and can easily be wrapped up and stored inside your camera bag or carried around with the attached handle. (Keep in mind that you’ll need a small funnel of some sort to fill it up efficiently.)

Is it priced right?

The Lollipod is one of the most economical options out there for people who want to engage in casual tripod photography. You can find it on InspiredPhotoGear.

As I stated at the beginning of this review, the Lollipod isn’t suited for the rugged lifestyle. It is however a fun, easy-to-use and economical alternative for anyone who owns a small mirrorless camera and is interested in dabbling in the world of tripod photography. Most importantly, it is the kind of tripod you wouldn’t hesitate to bring along even on the shortest of outings. That’s something I can’t say about many of the other tripods I’ve used in the past.

Do you own the Lollipod? If so, share your thoughts about it below!