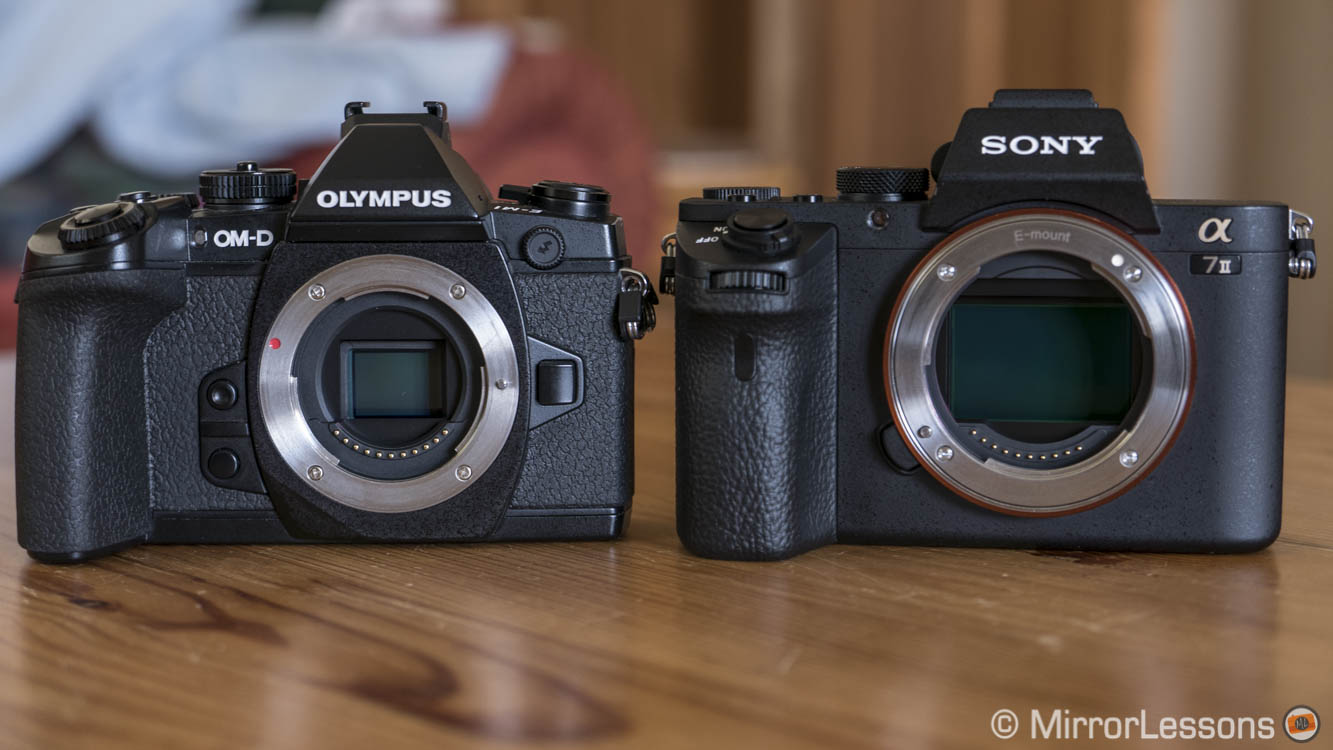 In-body stabilisation is one of the features I’ve come to appreciate the most, not only on the Olympus OM-D series (my main system) but on other mirrorless cameras that have it as well. More than once, it has helped me take a quick shot without a tripod on the job.

So when Sony announced a similar technology for the recently released A7 Mark II, I was curious to put the A7 II and OM-D E-M1 side-by-side to compare the two stabilisation technologies. Sony claims that its 5-axis system works differently from the Olympus system. But what matters is that both stabilisation technologies have the same goal, which is to reduce shake when using the camera hand-held.

With both cameras you can also adapt third-party lenses, which usually means old manual focus lenses. With the Olympus sensor, you will get a 2x crop factor while on the Sony camera the focal length equivalence is maintained. However on the A7 Mark II, only three axes are used (you lose Pitch and Yaw). This is because the lens can’t communicate the focal length and focus distance to the body. You can manually input the focal length to help the stabilisation work better.

On Olympus cameras, you can also manually input the focal length used but it seems that the camera still uses the 5 axes to stabilise the shot. This is all supposition on my part however, as I haven’t come across any official statements. It is also true that in the past I’d never encountered a difference in how the stabilisation works when using a manual focus lens on the E-M5 or E-P5.

So now that the proper introduction has been made, let’s see a couple of examples. Please note the following things:

The first example was taken at 24mm with the Sony A7 Mark II and the Vario-Tessar 16-35mm f/4 which has optical stabilisation. I used the OM-D E-M1 with the 12-40mm at 12mm, which corresponds to the same focal length on full-frame format. With both cameras, I managed to get a sharp shot hand-held down to 1s of exposure standing still, a result that was achieved after several attempts (7 for the A7 II, 8 for the E-M1). I tried some shots with a slower shutter speed but none of the images were sharp. In the past, I’ve managed to get a sharp result with the E-M1 using the 17mm 1.8 (34mm equivalent) and 1.5s of shutter speed. This doesn’t necessarily mean that the E-M1 is better, but simply that the stabilisation is also influenced by how steady you are.

Then I changed focal length and I used the 55mm f/1.8 on the A7 and the Leica 25mm 1.4 on the E-M1. Neither lens has OIS. I managed to get a sharp result down to 0.5s with both cameras. With a slower shutter speed, I got close to sharp results but none of them came out perfectly sharp.

The Sony A7 Mark II performed surprisingly well. Its 5-axis stabilisation system does seem to equal the one inside the OM-D E-M1 when it comes to stills. Considering the size difference of the sensors and that it is the first 5-axis system from Sony, I would say that the A7 Mark II does very well.

However there is one more aspect to analyse and that is video. The Sony A7 mark II uses 5 axis stabilisation for video as well as long as there is a native lens mounted to it, just like for stills.

In the case of the OM-D E-M1, the answer is a little less clear. The reason I am saying this is because my Olympus source told me that until the E-M5 Mark II, the OM-D E-M1 and E-M5 cameras only used 3-axes for video. However in other articles such as this one by Chris Gampat of the Phoblographer, his Olympus source states that 5 axes are also used for video on the E-M1. Of course I tend to trust my source and that’s why I’ve already mentioned this in other articles. My recent OM-D E-M5 Mark II review also shows the difference between the two cameras in terms of their stabilisation for video and how the E-M5 Mark II is an improvement.

Anyway, I don’t want to debate who is right or wrong here. In the end, I trust the results in front of me and in the video below, we can see that the E-M1 stabilisation works better whether it be 5 axis or 3 axis. If it is indeed 3-axis, then the result is even more impressive. The A7 Mark II’s stabilisation isn’t bad. Sure, it isn’t as effective but also has less of that “jello-y” effect we see in the E-M1 footage.

This shows that Sony has room for improvement when it comes to stabilisation for video. But we mustn’t forget that the A7 Mark II is the first full-frame camera to have this technology and I am sure that the company will be able to improve it over time. (Actually, they already have with a firmware update (version 1.10) since the first results on the A7 Mark II were disappointing.) Olympus on the other hand has shown us some very nice improvements with each camera release and the latest E-M5 Mark II is without a doubt the best camera for in-body stabilisation for both stills and video.

But now I am curious to see if Sony will use this sensor shift technology for purposes other than just stabilisation. The Olympus OM-D E-M5 Mark II has the High Res Shot mode so theoretically Sony could add a similar feature to its future cameras. However if that happens, I wonder if there would be the need for an A7r or a new camera with even more megapixels.

What do you think about the Sony A7 Mark II’s stabilisation? Do you think that a High Res shot function on the camera could be useful? Let me know in the comments below!