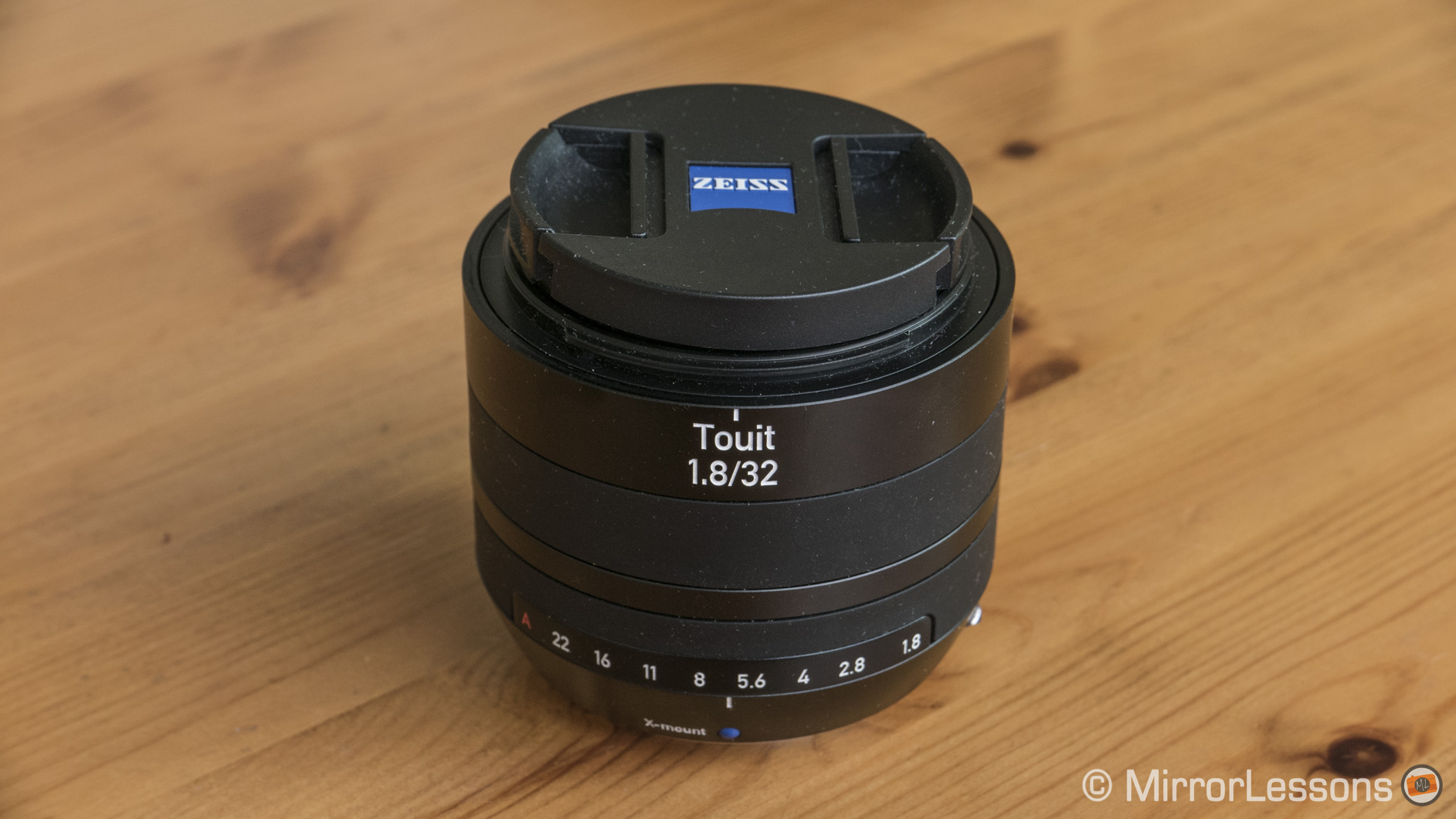 The tangible differences between the two lie elsewhere, specifically in their design, fastest aperture, corner sharpness and original price.

Is the Touit 32mm a worthy substitute for the 35mm on the Fuji X system? Let’s find out below!

Introduction to the Touit 32mm

As I mentioned in Part I, the Zeiss Touit lenses were designed for both the Sony E-mount system and Fujifilm X series, though they admittedly fill more gaps in the lens line-up of the former than the latter. In the case of the 32mm however, a cheaper equivalent for both systems already exists in the form of the XF 35mm f/1.4 and E 35mm f/1.8. Why Zeiss decided to create the 32mm remains a bit of a mystery, though my personal guess is that they wanted to give diehard Zeiss users the option of some basic focal lengths for the APS-C system of their choice. 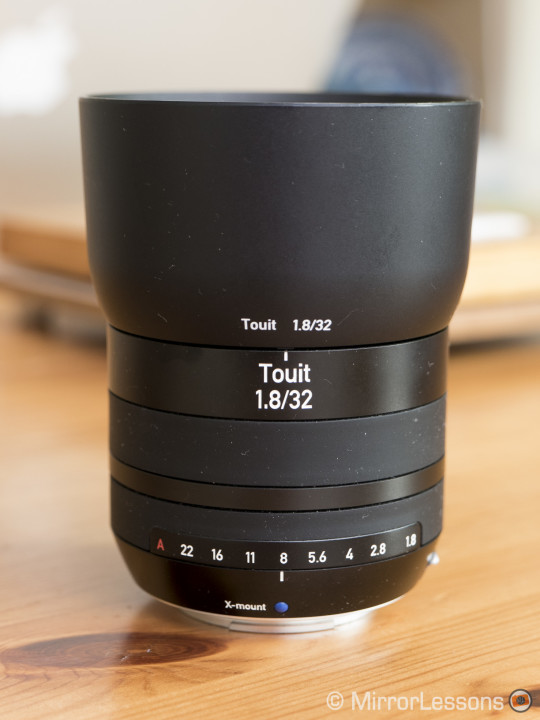 There is little to fault about the build quality of the Zeiss Touit 32mm f/1.8. From its all-metal barrel to its lightweight construction, the lens comes across as solid and well-conceived. An issue I’d had with the Fujifilm version of the Touit 12mm was the slip-sliding aperture ring but this isn’t a problem on the 32mm. (The Sony version lacks an aperture ring.) It turns in satisfying clicks and generally stays in place. 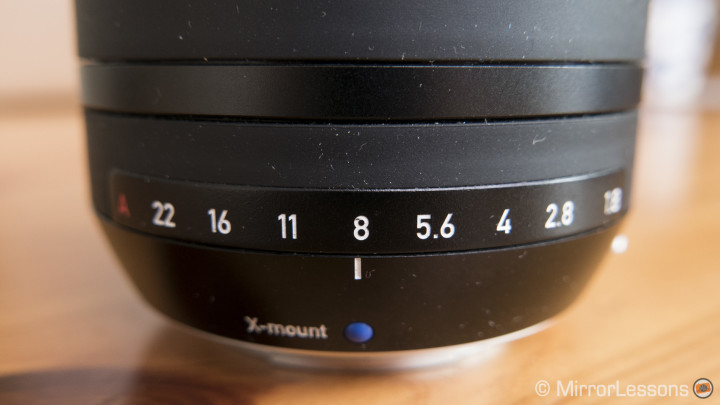 Both focus and aperture rings are smooth and rubberised, making them comfortable to handle even in cold conditions. However, the fact that they aren’t texturised also means that they aren’t very easy to find if your eye is at the viewfinder. The XF 35mm, by contrast, has ribbed metal aperture and focus rings which makes them easy to locate. I find that the aperture rings on both lenses have about the same degree of detent resistance.

Manual focussing is achieved “by wire” on the 32mm and I’ve found it very accurate and easy to use. 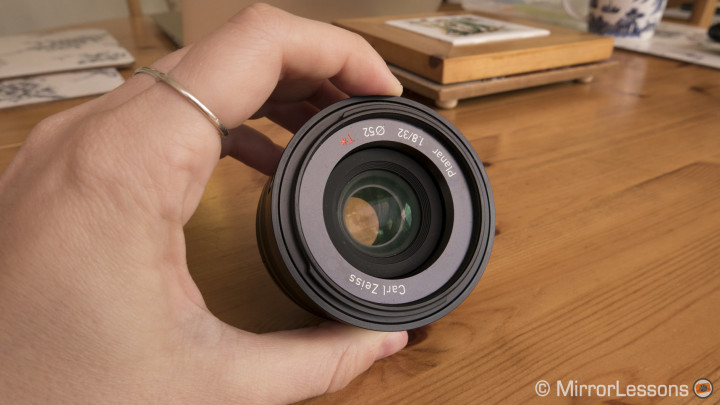 In terms of size, it is a little bigger than its Fujinon counterpart but remains a good match for the X-T1. The plastic lens hood makes it look longer than it actually is but it can be reversed over the lens when stored inside a bag. 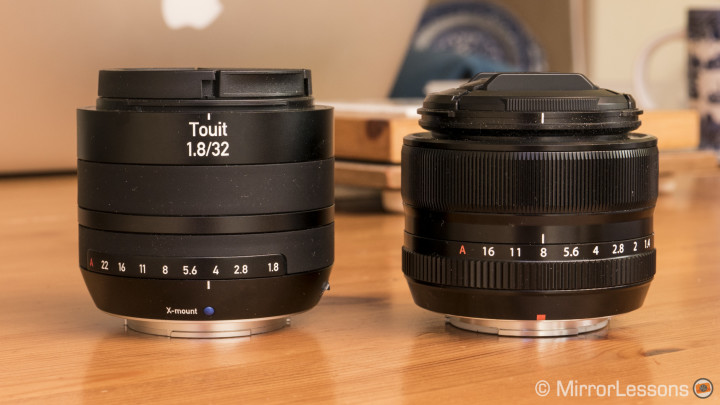 Build and design simply become side-notes in the story of a lens if the image quality isn’t up to scratch, and thankfully this Zeiss delivers on most fronts.

Its strongest point is sharpness, particularly centre sharpness, which is maintained throughout all the most important apertures.

The corners too are sharp at f/1.8. However this sharpness does not improve even if you close the aperture to f/5.6 or f/8. The XF 35mm by comparison starts off quite soft in the corners at its fastest apertures but quickly becomes sharper the more you stop down.

Of course, these observations are the result of pixel peeping and are only noticeable if you pour over crops.

Moving onto the bokeh, you’ll find that the rendering, while smooth and creamy overall, can sometimes appear “nervous” at the fastest apertures. This is especially true if the background contains a mishmash of objects, such as branches or leaves.

As a general rule, the closer you focus to your subject, the smoother the background rendering will appear.

Specular highlights (bokeh balls) aren’t the lens’ forte at f/1.8 and f/2.0 due to their “waxing gibbous moon” shape at the edges of the frame, but they significantly improve from f/2.8 onwards, taking on a perfectly round shape. (Keep in mind that this behaviour is normal for a very fast lens.) Chromatic aberration also disappears from the edges of the highlights after f/2.8.

I personally don’t mind the bokeh of the 32mm but it isn’t radically different from that of the XF 35mm, which started out as a significantly cheaper lens. In fact, I’d even say that the XF 35mm is creamier, owning in part to the fact that it goes two-thirds of an f-stop faster at 1.4. Below you’ll find a quick comparison of the bokeh of the two lenses at f/1.8.

While vignetting, flare and distortion are barely noticeable on the 32mm, green and purple fringing are a frequent occurrence near the edges at all apertures. With software programs like Lightroom, this defect is easily removable with the click of a button.

Stepping back and observing the images, I find them powerful and punchy, with true-to-life colour reproduction and good contrast. There is no question that, despite the small issues I’ve pointed out, this is a beautiful lens to have for street photography and documentary work and lives up to the Zeiss standard.

Before upgrading from firmware 1.0 to 1.3, I didn’t find the autofocus of this lens particularly fast or accurate at close distances as it wasn’t able to take advantage of the X-T1’s PDAF points. In fact, I often had to switch over to manual focus to bring close objects into focus. Now that it’s been updated, it is definitely much faster and locks onto close subjects with relative ease.

There is also a firmware update for the Sony version of this lens and all other Touits with the same upgrades (faster AF and ability to use PDAF).

It may seem that I’ve taken a pedantic approach to this review but that is only because I believe that a lens with an original price tag of nearly $1000 should be close to perfection. This is even truer in the case of the Touit 32mm because it faces such stiff competition from the XF 35mm f/1.4, a lens that, despite being less expensive, is optically in the same league as the 32mm.

That said, it is now fairly easy to find the 32mm at less than $500, so let’s forget about the price for a second and sum up its performance.

The Touit 32mm f/1.8 is a standard lens that would make an excellent addition to any street or documentary photographer’s kit. It deals out an impressive degree of sharpness at all apertures, has a smooth and creamy bokeh if you focus close, and now has a fast and accurate autofocus thanks to the firmware update 1.3. The build is lightweight, sturdy and functional and it suits a camera like the X-T1 to a T. (No pun intended!)

Would I recommend the Touit 32mm over the XF 35mm?

To finish off this review, I’ve posted a couple of portraits of Mathieu taken with both the 32mm and 35mm. I’ll leave it to you to decide which is which! 🙂

What I like about the Zeiss Touit 32mm (Fujifilm version)