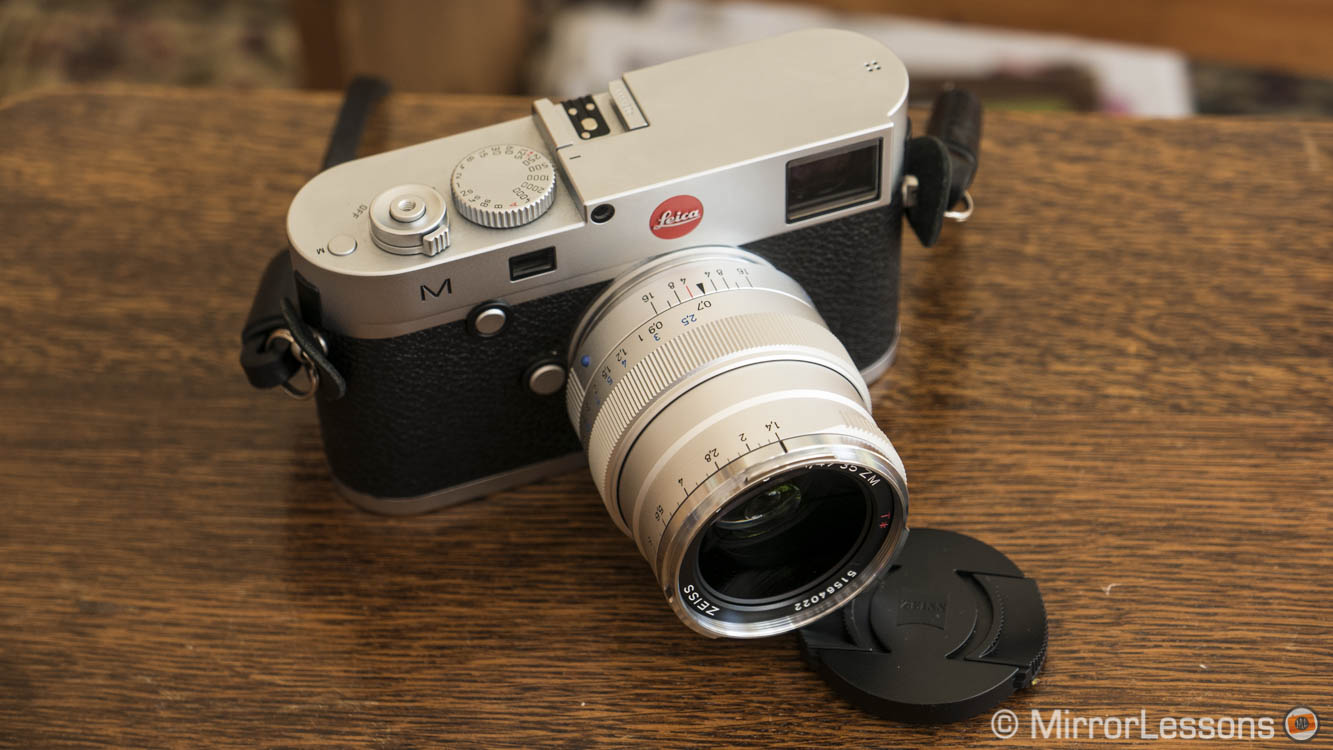 During my two weeks with the Leica M, I couldn’t suppress my curiosity to try the Zeiss 35mm f/1.4, which I’d first seen at Photokina last year. Fortunately, Zeiss UK had no problem sending me the lens to test. Though I used the compact Summicron 35mm f/2 for the first outings with the camera, once I received the Distagon lens, it never left the mount of the M 240. You can already guess that I liked it very much.

The Distagon 1.4/35 is a manual focus lens. It is the 12th lens designed for the M-mount system by Zeiss but is the first to be optimised for digital sensors. The other ZM lenses were designed for the M film cameras as well as the now discontinued Zeiss Ikon, a rangefinder analog camera that proved a valid alternative to Leica cameras in the past (or even today if you are lucky enough to find one).

The lens has the classic “reportage” focal length of 35mm and a fast aperture of f/1.4. Its build quality is up to the standard of most rangefinder lenses: it has an all-metal build with mechanical focus and aperture rings. The aperture ring is tight and thus very precise to use. The focus ring is really pleasant as well: neither too tight nor too smooth. The only other lenses I’ve enjoyed manually focussing with as much as this are the Leica M lenses.

It is simply mechanical perfection that you perceive from the first minutes of use.

The focus ring doesn’t have the focusing handle that you usually find on Leica M lenses but has a prominent knob at the bottom side of the ring that can be of help. The aperture ring is split into 1/3 Ev steps for a precise exposure.

The lens is longer than the Leica 35mm Summilux. The image below is an “unfair” comparison with the Summicron 35mm. It can give you a pretty good idea of the size of this Zeiss lens. 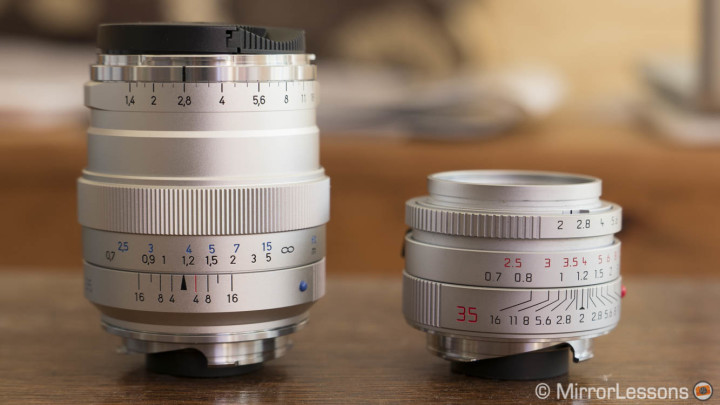 Despite the size, I must say that the lens doesn’t get in the way of the rangefinder too much so the view is still good. It might get worse with the lens hood but I can’t confirm because it wasn’t included in the box. Actually I believe you have to purchase it separately.

Through the lens: Image quality

The performance wide open is not perfect however and there are some traces of chromatic aberration at f/1.4. However at f/2 it is almost gone. Vignetting is also present but easily removable in post production. Unfortunately on the Leica M there aren’t any Zeiss profiles. I manually chose the Summilux 35mm 1.4 ASPH profile which seems the most natural choice since it is the most recent version of the lens in the Leica line-up.

Below you can slide between the original shot and the Lightroom version with vignetting and CA correction. 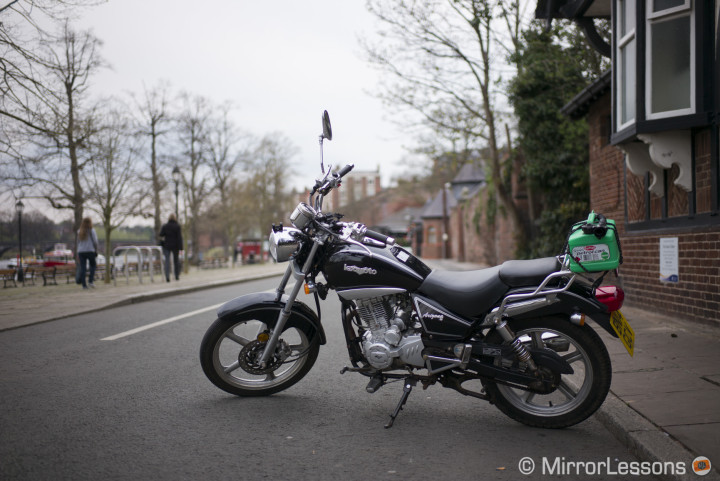 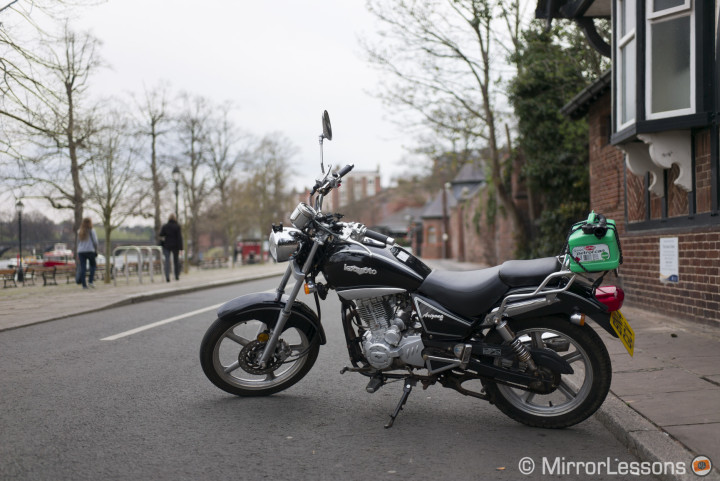 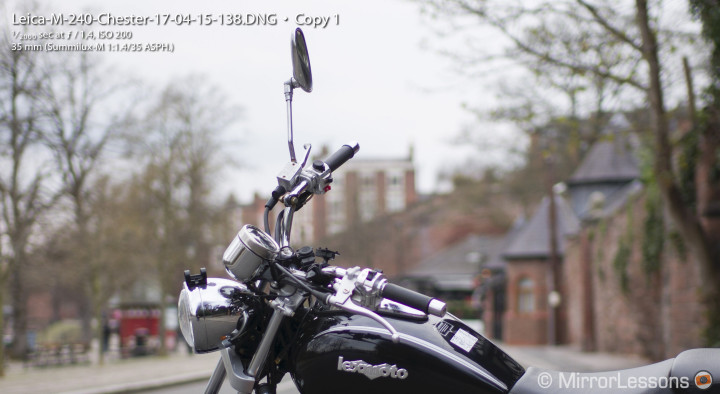 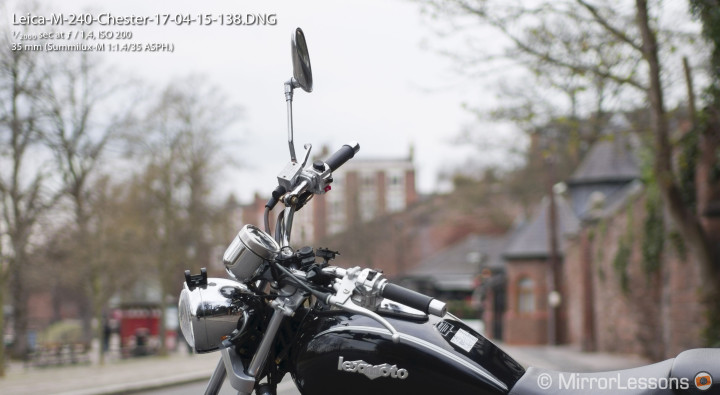 At the fastest apertures the lens can render a nice soft bokeh that has that classic Zeiss character. Sometimes I wished that I could focus a little bit closer than 70cm.

However even when not focusing at the shortest distance, the lens’ ability to separate the subject from the background is good. I don’t have much experience with the Leica Summilux 35mm but I can certainly remember that its bokeh is more pronounced: creamier and with a higher capacity to separate in-focus and out-of-focus elements. But personally I really like the Distagon’s look.

Stopped down, the lens will give you optimal sharpness throughout the frame. Colour rendering is great with lots of pop. It is well balanced with natural tones and micro-contrast is also excellent. I would say that the optimal aperture is 5.6 but the lens is excellent even at the smaller apertures and diffraction is almost absent at f/16. The only thing that I found a little bit weird was the distance scale. When I set the aperture at f/11 or f/16 for example, I would normally align my focus ring so that the infinity mark would match the corresponding aperture markings and give me the distance range where everything is in focus. However, by doing so I often found that the background was slightly out of focus. I had to turn the focus ring slightly to the left (increase my focus distance) to have the background perfectly in focus. I wonder if this was related to my sample only.

I haven’t found any relevant trace of barrel or other types of distortion. The lens element features the Zeiss T* coating and flare is well-contained.

Having an E-mount/M adapter, I also tried the lens on the A7s. Zeiss told me that the lens shouldn’t perform well on the A7 series but I believe that the A7s is the least problematic out of the four A7 cameras since it has a 12MP sensor that is known to be less harsh on adapted wide angle lenses. Below you can see some image samples. I noticed similar vignetting and CA behaviour at the fastest aperture but otherwise it performed really well. It is certainly an interesting option if you like manual focus lenses and Zeiss lenses in particular.

Sometimes I get the impression that my lens reviews are all very similar but the fact is that lately I’ve only come across good lenses. Perhaps with more scientific tests I would find more in-depth results regarding certain aspects but I prefer to focus on what the lens gives me in terms of look and usability. I really enjoyed shooting with the Distagon 35mm ZM. It is a great match for the Leica M and also a valid alternative to the more expensive Summilux 35mm. If you like Zeiss lenses, you will love this one.