You are here: Home / Galleries / The Pirate Weekend in Conwy – A Leica M Monochrom (Typ 246) Gallery 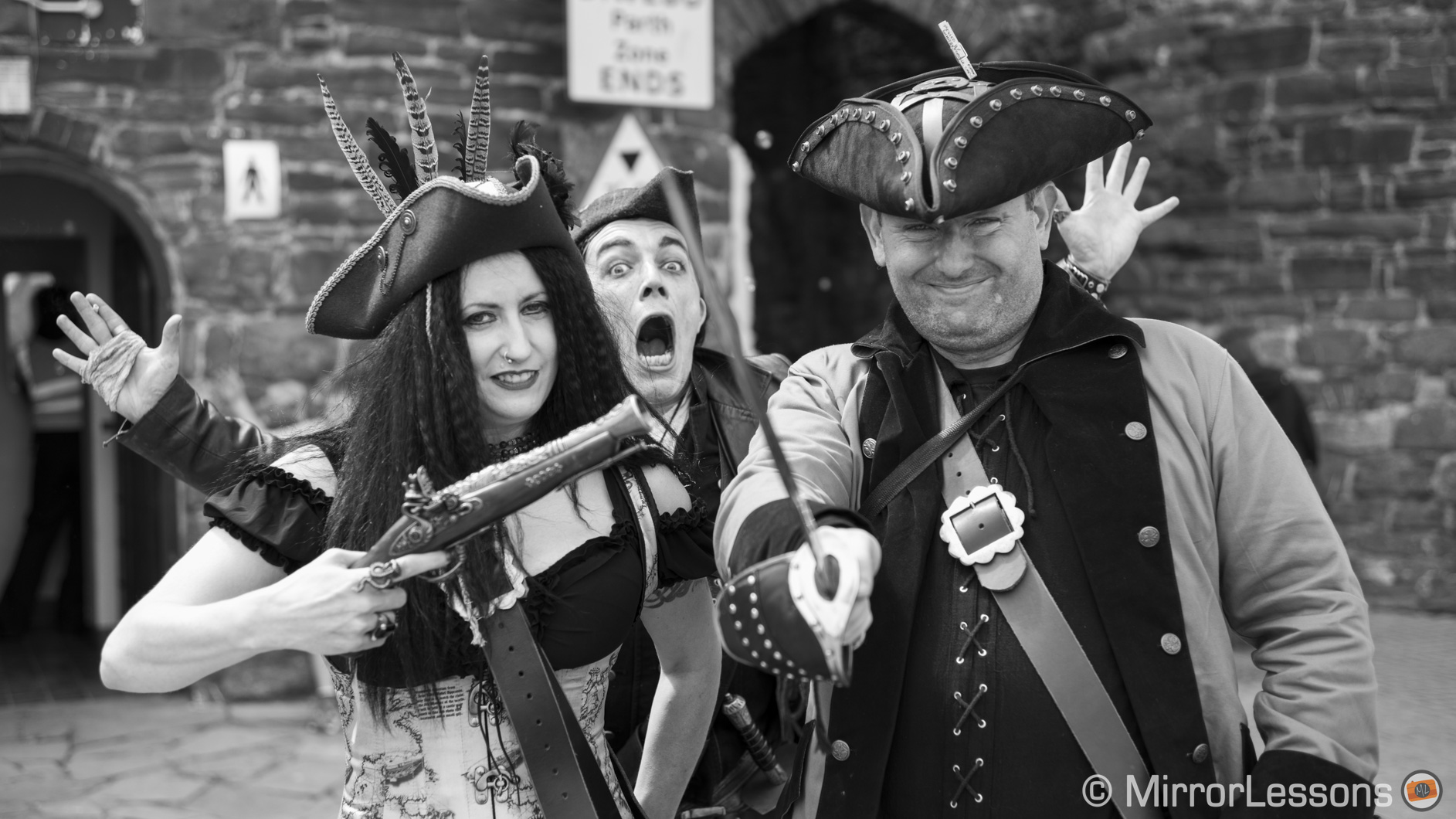 What’s not to like about a friendly bunch of pirates happy to be photographed? This past Sunday, Heather and I went back to Conwy for the Pirate Weekend, nearly a month after the Gran Fondo Conwy race. It consisted of two days of games, cannon fire demonstrations, music, food, and of course, lots of people appropriately dressed for the occasion. I thought that black and white could suit the pirate costumes well, so I brought along the new Leica Monochrom Typ 246, which I am currently reviewing.

Once we’d arrived in Conwy, we noticed right away the many pirate flags hanging from the buildings. It was a nice warm day with the right mix of clouds and sun that produced just the kind of contrast needed for black and white shots. It is the second week that I’ve been using the Monochrom, and once you get used to having only the monochromatic option, you really start to enjoy it. You look at things differently because you aren’t on the lookout for punchy colourful elements. Rather, you pay more attention to light and contrast.

While Heather wandered off to explore the town, I stayed by the bay pretty much the entire time, walking back and forth and photographing the people that I found the most interesting. I was looking for faces that actually resembled those of real pirates. Some of them had really nice costumes as well. They were all very friendly and pleased to be photographed.

For me, it was also an excellent opportunity to improve my manual focussing technique with the Leica optical rangefinder (because as I am sure you already know, there isn’t any AF with this camera). I asked people’s permission to take their portraits and I didn’t want to make them wait too much. Composing, adjusting and firing the shot was done in a matter of seconds.

I didn’t nail the focus perfectly every time, even though it often looked perfect when I played back the picture on the LCD screen. Also, since the overlaying rectangle is at the centre of the optical finder, I did a lot of focusing and recomposing. I admit that I slightly cropped most of these portraits because I had the tendency to leave some empty space at the top of the frame.

Of course I could have also used the live view on the LCD screen with magnification and peaking but my main goal was to practise using the optical rangefinder, which is one of the main reasons you’d want to shoot with such a camera in the first place. While most of the crowd was concentrated in and around the bay, there were also a few interesting things to photograph in the nearby streets. A few additional pirates were there, like the gentleman below who was selling goods outside his shop.

Back at the bay, we came across some owls and eagles from Europe that you could actually stroke. They are such wonderful birds to see and photograph.

My eye also caught some interesting and old “pirate” tools that were on display, such as these old handcuffs that people could actually try. There were also cannon balls, old compasses and navigational instruments.

Events like this also lead to some unexpected and very pleasant chats with strangers. I had a great time talking with the gentleman below who told me the story behind the restauration of the fishing vessel Helen II, originally built in 1910. It is a project he is currently carrying out with with his wife and a couple of volunteers. The aim is to make the vessel available for  educational trips for the younger generation. During the event, he was showing the children the many different knots you can tie with a rope. I was amazed to learn that he speaks fluent French and Japanese!

The day ended with the (very loud) Cannon Fire demonstration. By using the continuous shooting capabilities of the camera, I managed to take an almost perfect shot on the cannon firing the ball. The last portrait is of the four people who were doing the demonstration. It is also a prime example of me not nailing the focus perfectly!

Have you ever tried shooting solely in black and white? Tell us about your experience in the comments section below!