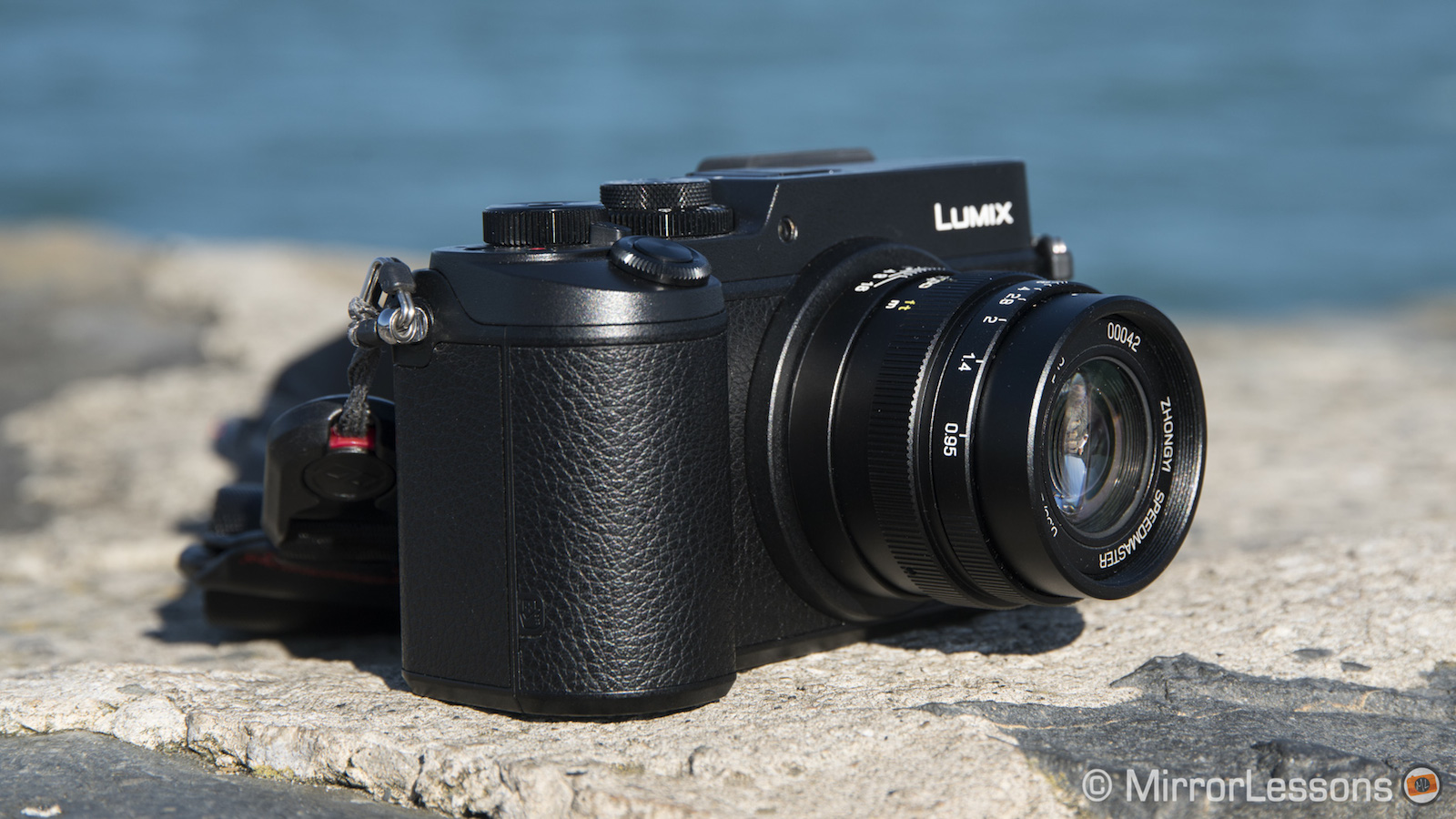 Say the words “0.95 aperture” to a Micro Four Thirds user and their ears will certainly prick up. The main benefit of a lens with an aperture this fast is of course the extra shallow depth of field, which is more difficult to achieve with a Micro Four Thirds sensor than with a larger sensor.

The manufacturers that have stepped in and created some very fast manual focus lenses for Micro Four Thirds include Voigtlander with its f/0.95 Nokton series, SLR Magic with its Hyperprime range, and ZY Optics, the creators of the Speedmaster series which comprises both f/0.95 and f/1.2 aperture primes.

The latest f/0.95 prime from ZY Optics is also the world’s lightest. The Mitakon Speedmaster 25mm f/0.95 weighs just 230 grams and is just a little larger than most small Micro Four Thirds primes from Olympus and Panasonic. And, as with most ZY Optics lenses, it comes with a very attractive price tag.

This actually isn’t the first time we’ve reviewed a ZY Optics lens. You may recall that we had the chance to review the Speedmaster 24mm f/1.7 and 42.5mm f/1.2 back in late 2014. While the 42.5mm was interesting for stills and video use thanks to its pleasant bokeh rendering and acceptable sharpness, the 24mm presented quite a few speed bumps including a lack of sharpness at most apertures, barrel distortion and lens flare.

So, what about the Mitakon Speedmaster 25mm f/0.95? Is it a worthwhile investment for those who crave some extra shallow depth of field in their images? Let’s find out!

For this review, we used the Mitakon Speedmaster 25mm f/0.95 on both the Panasonic Lumix GX8 and Olympus OM-D E-M1.

Design, Build and Ease of Use

The most notable physical features of the Speedmaster 25mm f/0.95 are its size and weight. Despite being a f/0.95 prime, the lens is only 230 grams in weight and 45mm in length without the lens cap. The size and weight make it a good match for all Micro Four Thirds cameras.*

The ribbed focus ring is smooth and pleasant enough to use but can be slightly inaccurate when you really want to fine-tune the focus. It is flanked by a well-marked depth of field scale, which is a useful addition for street photographers who zone focus.

The de-clicked aperture ring is also well-marked but the values between f/8 and f/16 are too close to one another. I also found that it turns too freely. More than once, I accidentally brushed against the lens only to discover my aperture value had changed completely. It is, however, very useful for video.

When you shift the focus from infinity to the minimum focus distance of 0.25m, you’ll notice that the lens extends about a centimetre outwards. This is because the lens doesn’t have an internal focus mechanism. It also features a non-rotating 43mm filter thread. 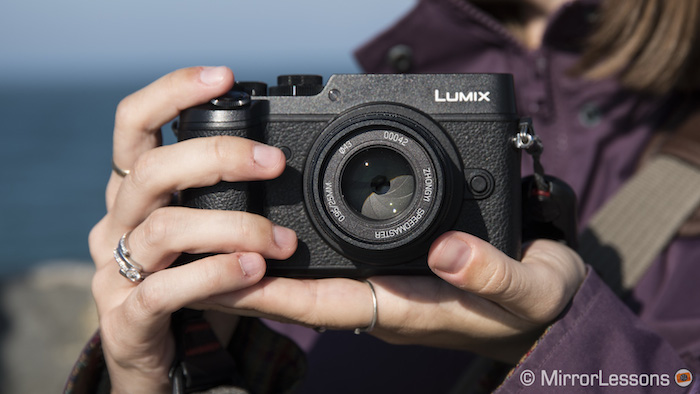 ZY Optics has stated that the 25mm f/0.95 will not work with Micro Four Thirds models that feature a ladder-like internal structure around the sensor. These include the Pen E-PL6, E-PL5, E-PM2 and the original E-M5. See the ZY Optics website for more details.

Sharpness – Is the 0.95 aperture worth using?

Anyone interested in buying this lens certainly has their eye on the 0.95 aperture. Why? Because an aperture this fast on a Micro Four Thirds camera can give you something similar to a full-frame look thanks to the extra shallow depth of field.

The good news is that, at close range, the lens is already quite sharp at the centre at f/0.95 and continues to grow sharper up until f/2.8 where it reaches its peak performance. The lens remains reasonably sharp up until f/8, at which point diffraction starts to set in. Corner sharpness is quite poor at all apertures except f/8, f/11 and f/16 but this is less of a concern for close-up work where out-of-focus edges can actually contribute to the artistic look of an image.

For subjects at a greater distance, centre sharpness tends to peak between f/4 and f/5.6 but f/8 and f/11 are still quite useable. Corner sharpness peaks between f/8 and f/11 and grows progressively worse as you open the aperture. Given the reasonable sharpness at the slower apertures, you can safely use this lens even for street or landscape work.

Overall, I was surprised by the sharpness of this lens. It isn’t on the same level as an equivalent prime from Olympus or Panasonic but since neither company has produced a prime with a 0.95 aperture, the Mitakon is a feasible alternative.

To see a full series of images taken at the various apertures, you can check out our dedicated SmugMug gallery. Also be sure to check out the following image samples by Richard Wong.

You can see some High Res images taken at the most important apertures here:

Let me start by saying that, much like fine art, bokeh is very subjective. While one person might love a smooth buttery rendering, another might crave the artistic effect of swirly harsh lines.

In the case of the 25mm, I find the bokeh pleasant with the right background, especially if there are elements far off in the distance. Some good examples can be seen from our trip to the Cregennan Lakes.

To achieve a nice bokeh, it also helps to focus as close as possible to your subject. Since the 25mm has a minimum focus distance of 25cm, there are lots of possibilities for creative compositions.

In other cases, the bokeh reveals its imperfections. Signs of “Nisen” bokeh (when out of focus lines appear as a series of dark and light lines) and aspherical specular highlights with harsh edges can give the bokeh a nervous appearance. On the bright side, there isn’t any sign of the “onion ring” effect you sometimes see in specular highlights.

Personally speaking, I don’t mind the bokeh and feel that it is one of the lens’ stronger points. But then, I’m also a fan of Picasso and Van Gogh! 🙂

Flare – Both a nuisance and an artistic tool

According to the ZY Optics website, the lens has “optimised lens coatings also help to suppress lens flare and ghosting.” Unfortunately, the results I achieved would suggest that these coatings don’t work as well as they should.

We shared some of our images with ZY Optics as we were somewhat concerned about the lens flare issue. The company told us that they are aware of the issue and will improve the performance in mass production.

Flare is present in nearly every image where the sun’s rays enter the frame, though the appearance of the flare varies according to your position with respect to the sun.

While there is no question that the 25mm f/0.95 could benefit from a lens hood, a second option is to use your hand to block the sun from your frame as I did for the image below.

Of course you can always use lens flare to create an artistic composition. In the example below, the pinkish flare actually accentuates the pink in the heather on the hills.

Another issue that can occur at any aperture beyond f/2, but is most noticeable from f/8 onward, is the well-documented “hot spot” also seen on the likes of the Nikon 50mm f/1.8D. It appears as a magenta spot in the centre of the image and is caused by light bouncing between the sensor and the rear element. It is much more evident in scenes with dark tones. Sadly, no amount of shading the lens from the sun’s rays will remove the spot. For that, you’ll have to rely on the magic of post production.

This hot spot is probably the one aspect that lets the lens down more than anything else. It would be less problematic if it were only present at f/16, as you’d be unlikely to use the slowest aperture that often anyway due to diffraction, but the fact that it appears even at f/2.8 in some cases is disappointing. To avoid having the hot spot in your images, you  have to constantly be aware of where the sun is positioned in your frame.

Though some slight vignetting is present up until f/5.6, it is hardly visible. Chromatic aberration in the form of purple fringing appears at varying degrees of severity between f/0.95 and f/8 and disappears by f/11.

The lens also yields some slight barrel distortion, particularly at close distances. All these issues can easily be corrected in post-production software programs like Lightroom.

What about low-light performance?

For low-light shooting, the 25mm f/0.95 proved an excellent companion. On a pitch black night with very little ambient light from the street lamps, I was able to keep my shutter speed to 1/50 on the stabilised GX8 and my ISO value to 800 by using the fastest aperture for both close-ups and wider shots. Once again, I found the overall sharpness more than acceptable.

Bear in mind that, just as in daylight, you might notice that artificial lights at night produce some invasive flares.

As I mentioned above, the de-clicked aperture is a useful feature for video. Below you can find a quick compilation of video shots I took in the town of New Quay. 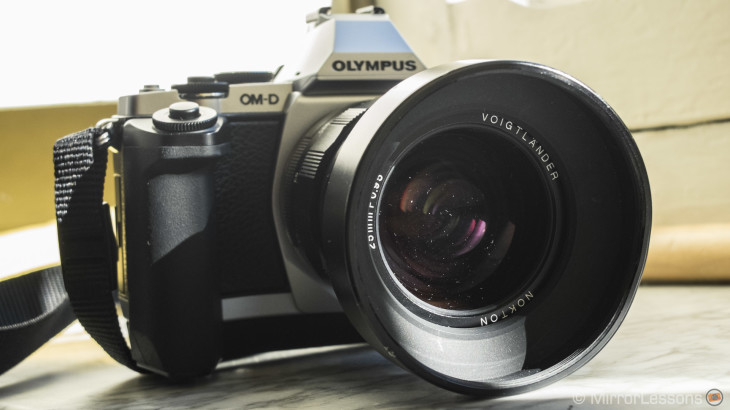 Now, the question I’m sure many of you are asking is: how does the Mitakon 25mm f/0.95 compare to the Voigtlander 25mm f/0.95? Unfortunately, a direct comparison wasn’t possible because I didn’t have both lenses with me at the same time but after reviewing the images from our hands-on review from two years ago, I would conclude that the Mitakon is marginally sharper at the fastest aperture. It is also much lighter, smaller and cheaper than the Voigtlander equivalent, though the latter has recently come down in price.

The Voigtlander does have quite a few points in its favour, however. The out-of-focus rendering is (in my opinion) softer and more pleasant to look at, it focusses closer (17cm vs 25cm) and the lens markings are more well-spaced. It doesn’t seem to suffer as much from flare, which is also helped by the lens hood, and chromatic aberration doesn’t seem as rife. Most importantly, we never encountered the “hot spot” issue that is so pervasive in images taken with the Mitakon.

If you’ve scrolled through this review and baulked at every flaw I’ve mentioned, I think you know what I’m going to say: this lens is not for you. In order to enjoy using a lens like this, you have to be willing to accept some compromises. In exchange for a very decent 0.95 aperture that delivers even at close range and good overall sharpness, you have to deal with issues such as flare, hot spots, chromatic aberration, and mild distortion.

Thankfully, a couple of these issues can easily be resolved in post production, but there are a few that you’ll either have to accept (a bokeh that can sometimes be nervous) or try to avoid (positioning yourself so flares don’t appear). While ZY Optics has vowed to improve the flare issue by the time the lens reaches mass production, I believe the more pressing issue is the dreaded “hot spot” which, unlike standard flares, appears in certain conditions even if you shade the lens with your hand.

Then there is the price. Given that most 0.95 lenses cost at least $1000, you could easily call the Mitakon a “steal” at $399. But the fact that it is relatively more affordable than other 0.95 lenses doesn’t stop it from taking a large chunk out of your bank account.

What I like about the Mitakon Speedmaster 25mm f/0.95

What I don’t like about the Mitakon Speedmaster 25mm f/0.95