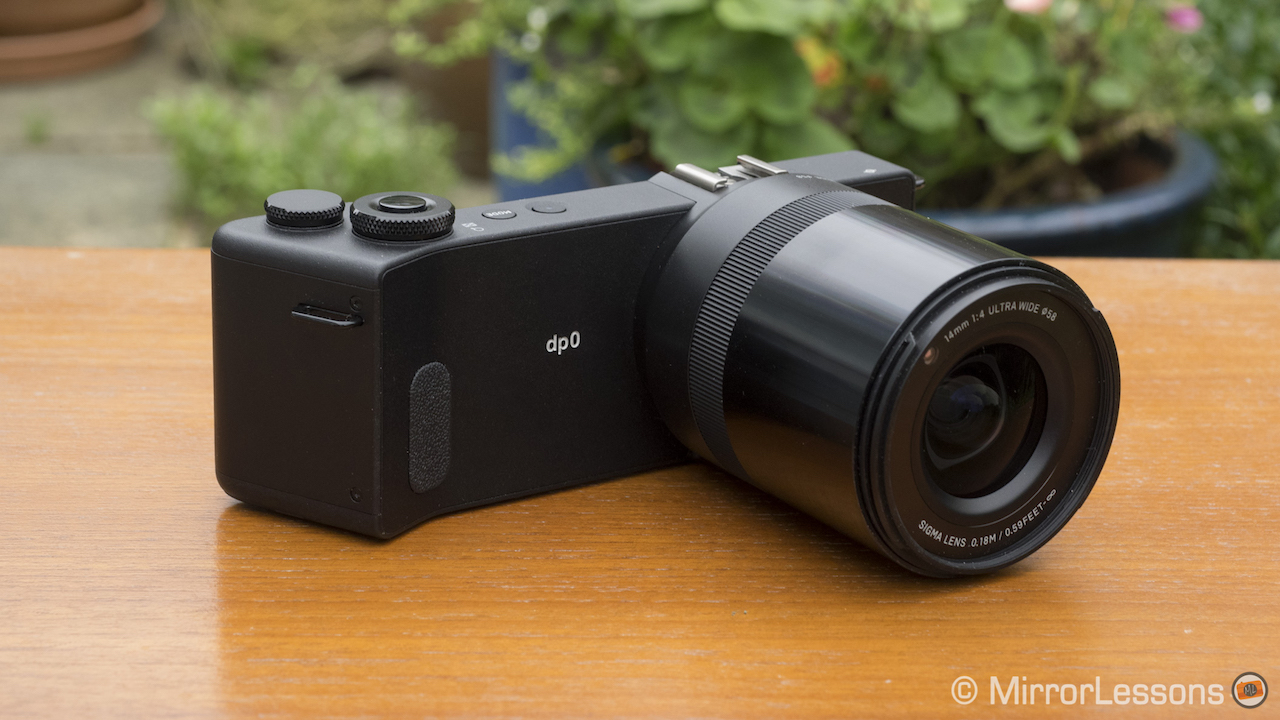 Landscape photography is by far one of my favourite genres and is one of the many reasons I decided to move to the UK early on this year. Thanks to MirrorLessons, I often have the chance to test many camera and lens combinations that suit this category well. But speaking purely as a photographer, I can’t help but wonder from time to time what my ideal companion for shooting landscapes would be if I didn’t run a gear website. It isn’t an easy question to answer, and there is a very real temptation to spend too much money and become a victim of G.A.S. (Gear Acquisition Syndrome) during the quest for the perfect camera.

When I reviewed the Sigma DP2 Quattro last year, I thought I had found a partial answer as far as image quality is concerned. I was really impressed by the details and colour rendering of the Foveon sensor. The camera has multiple downsides but the quality at low ISO makes it worth your while especially if you like to print large (the max output is 39MP). However at the time the system was lacking a true wide angle offering. The DP series is a non-interchangeable lens system and the other models (DP1, DP2, DP3) have more standards focal lengths going from 28 to 90mm (full-frame equivalent). You’ll want to buy one of these products only if the prime lens attached suits your needs perfectly. The new Sigma DP0 Quattro fills this gap with its brand new 14mm lens (21mm equivalent).

Since the DP0 is the same as the other DP Quattros (except for the lens of course), I won’t write a full review. You can read an in-depth analysis about the sensor, the ergonomics and all the pros and cons in my complete DP2 Quattro review. The only difference I noticed is that the autofocus is a little faster on the DP0. Also, concerning the ergonomics, the lens is longer which makes the DP0 bigger in comparison to the other DP models.

In this article, I will try to answer the following question: Can the DP0 be an optimal landscape companion?

Choosing a DP camera starts with the lens. The DP0 has the most interesting option for landscapes and as a matter of fact, the 21mm field of view suits my taste well. It is not too wide, not too narrow. For landscapes I rarely felt the need for something wider, unless I found myself in a tight spot between big rocks for example or at the bottom of a very high waterfall that I wanted to capture in its entirety. In general I would say that choosing the right focal length for landscapes also has to do with your personal style. For me, 21mm is fine. It can also work well for other genres such as architecture and urban cityscapes. However for the latter you might wish for something wider on more than one occasion.

The lens performs very well when it comes to sharpness. Centre is already good at the fastest aperture of f/4 while corners improve from f/5.6. Diffraction becomes noticeable from f/16. You don’t get invasive chromatic aberration but what little there is can be corrected in post production easily. Vignetting is more present however and the Sigma Photo Pro software doesn’t correct it automatically. But the only real flaw in this case is flare when direct sunlight involved. There is a lot of sensor flare which is something that I noticed on the DP2 as well. In some situations with less light intensity you can get around it but for other scenes, it can be more annoying.

With the Foveon sensor I generally find that a balanced or calm scene gives you better results than a composition with very strong contrast. This is also related to the fact that the camera is weak in the highlights. It is better to underexpose to preserve them, then recover the shadows in post-production. But you still won’t get the same amount of dynamic range as other cameras. In post-production, Sigma’s software allows you to increase the dynamic range with a tool called X3F fill in but it can quickly increase noise and also cause white clipping in the brightest areas. I usually don’t set it to more than 0.4 or 0.5. You also have the option of AE bracketing with a maximum of -+3Ev and three shots. However merging the X3F Raw files together is not easy. Sigma’s software doesn’t offer a proper HDR option so the best way is to convert them to 16bit Tiff files and blend them with Photoshop. However the results aren’t as satisfying as with other Raw files, so I prefer to stick with a single exposure.

For scenes with balanced colour and contrast, on the other hand, the rendering is really spectacular especially concerning colours. This is where the camera delivers its best performance. I particularly enjoyed shooting the Nant Gwernol woods where the colours of the fallen leaves really came to life with this camera.

There are some limitations that you might find annoying when shooting this type of landscape image. The first thing is that the slowest shutter speed is limited to 30s and there isn’t a bulb mode. So there is no way to go beyond that 30 second limit. The images you see in this articles were all taken with the Lee Seven5 Little Stopper. If I had wanted to use a stronger ND filter to blur the water even more, I would have struggled. If you like very long exposures taken with filters that give bodies of water a surreal and calm appearance, then this camera is not for you. However one trick to get past the 30s limit is to take multiple exposures and blend them together in post production.

Another annoying thing is that as soon as the available light starts to fade, the live view becomes really dark, even if you disable the exposure preview. This is also another reason why a longer exposure speed would be of help. For example the shot below was underexposed by almost 2Ev. The DP series needs light both for the live view and to keep your ISO down, because past 400 ISO, noise starts to become really invasive.

Another small point to consider is the lack of a tilting LCD screen. In some situations especially when shooting at lower angles, it would be comfortable to have. The camera lacks an EVF as well but that to me is perhaps less of a problem. In these situations I keep the camera on a tripod (also because there is no internal stabilisation in any form) so I actually find it more comfortable to use the LCD screen. Sigma also has an optional loop for the LCD that can be quickly removed. I tried it at the Hatfield House press event. It is comfortable to use when shooting in strong sunlight; otherwise I would probably leave it off.

Many reviews complain about the slow process of working with this camera. It takes a few seconds to save a single file onto the SD card and the proprietary software needed to process the Raw files is slow as well. However for me this slow process is not much of an issue because this is not the kind of camera I would want to use to bring back 400 pictures in one day. I use it with a tripod mostly so I don’t worry too much about its awkward and somewhat uncomfortable ergonomics. I take the necessary time to adjust my composition and after taking a picture, I spend time thinking about the next composition or where to go next. So if I come back with 50 shots in one day, I’m more than happy. I will only select a few in the end so it means processing 5 or 10 shots at most. For this reason, I can deal with a slow software. Of course if you plan to take a higher number than that on a daily basis, it can become more frustrating.

Can the Sigma DP0 be an ideal camera for landscapes then?

It is definitely the only DP I would really consider. The image quality is great and the colours I can get out of it are second to none. The new lens fits my needs very well and I can deal with most of the negative points that include flare, slow processing and a short battery life (two are supplied with the camera). The limitation of the slowest shutter speed is perhaps the only thing that bothers me more because it can limit the creative process. I like to work with filters and would like to do it more often actually. I did get nice results with the Little Stopper, so perhaps I could find a workaround using multiple exposure when I want to emulate a longer exposure than 30s.

I realise that this camera asks the user to accept many compromises and that might not suit everyone. The DP0 as with every other DP camera is a niche product. For the image quality it delivers, I believe the price is reasonable. I think it is worth the purchase if you know exactly how you are going to use it. It is not a main body or a camera that is meant to replace another system. You buy it as an addition to the gear you are already using.

Concerning the DP0 specifically, I am a little bit disappointed that Sigma didn’t take the chance to improve a few things in comparison to the other Quattro models. After all they released it more than one year after the others. Specifically, I wish that Sigma could have implemented a few upgrades that enhance the shooting experience. Not game-changing technology but a few aspects that are now commonplace on any other camera: a tilting screen and bulb mode would already be enough for me.

One additional note about the whole Sigma camera system: I do wonder where Foveon technology is heading. My impressions is that it is evolving a little bit too slowly. Colours and resolution are great but it seems to struggle to catch up with other things like more dynamic range (especially in the highlights) and high ISO performance. Today traditional Bayer CMOS sensors offer impressive performance in almost any condition without compromising resolution or sensitivity (think about the Sony A7r mark II). There are also rumours about other brands looking into Foveon-like technology. My fear is that if Sigma doesn’t take the next step soon, we could be looking at a system whose days are numbered.

To find out more about the DP system, you can check out the following articles: