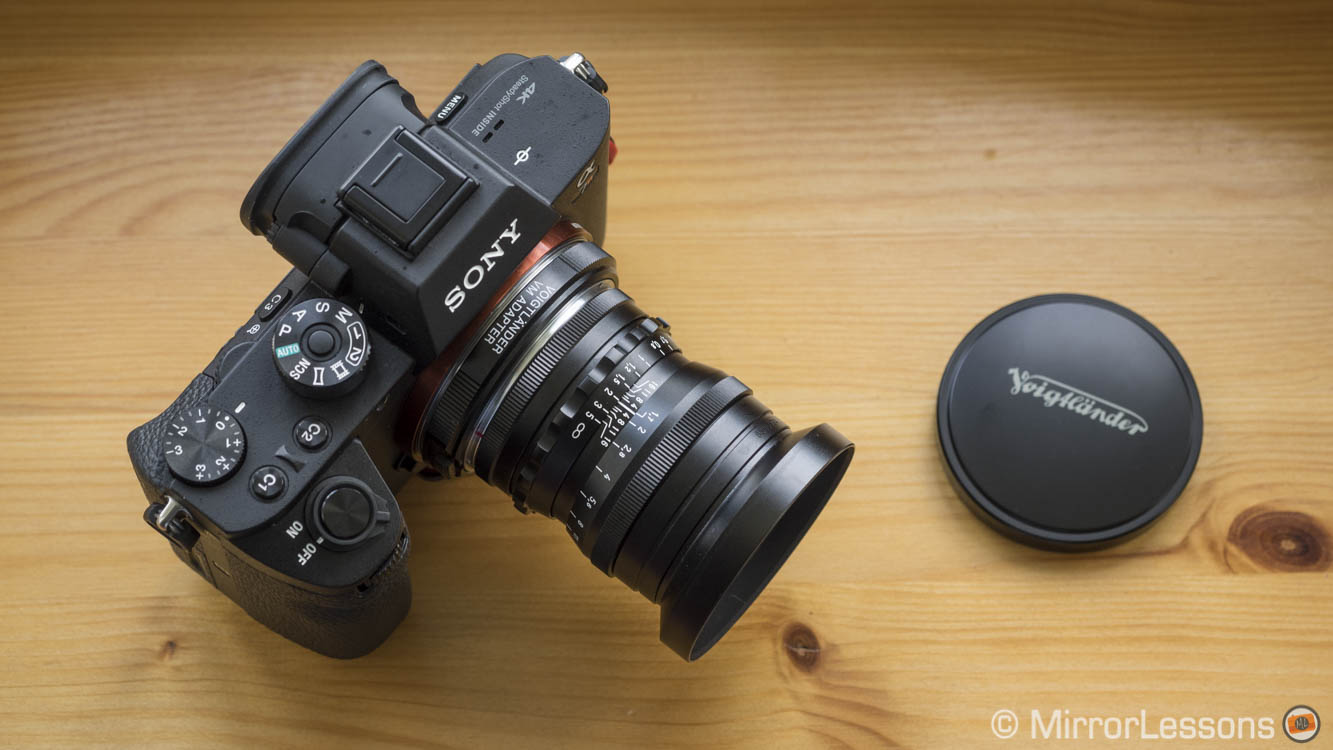 Now that our full Sony A7r II test is complete, it’s time to continue with our reviews of interesting Voigtländer lenses to use on the camera. The former German brand has an interesting collection of compact lenses that go from extreme wide angle to fast medium focal lengths. These lenses are designed for the Leica M system but can easily be mounted to the Sony A7 series via a thin adapter (I have the Voigtlander VM adapter).

Voigtländer announced that some of these lenses will be released next year with a native E-mount and electronic contacts to transmit exif data. This is an excellent move, as doing so will reinforce the lifespan of these products in the digital age (many were designed for M film cameras). Among these new lenses, we will also see a brand new 10mm f/5.6 which will become the world’s widest angle lens made for the 35mm format.

Note: the best way to tell the difference between the old 35mm f/1.7 and the new version is by looking at the barrel design. The new version of the black 35mm doesn’t have any red markings on the focus ring while the silver version has a dark ring in the middle. The new versions are also slimmer at the centre of the barrel.

Design and Ease of use

The lens is entirely made of metal and comes with a metal lens hood that is screwed on the 46mm filter thread. The 35mm f/1.7 is compact and light so it fits the A7r II body well.

The aperture ring has a 1/2 Ev clicking mechanism and is located in the middle of the lens barrel. The ring is nice to use and the mechanism turns in decisive clicks. I inadvertently altered the aperture only once while shooting with it.

The lens doesn’t have an inner focus mechanism but the length only varies a little when going from the shortest distance to infinity. The focus ring is located on the rear end of the lens. It features an indented design that makes it recognisable by touch but I do not find the ring very comfortable. It lacks some smoothness and I prefer to have the aperture ring near the rear of the barrel and the focus ring near the front.

The lens is not weather sealed nor does it have electronic contacts on the mount to transmit exif data to the camera, so your aperture value won’t be recorded.

The lens is available in two versions: a less expensive lighter black aluminium version and a heavier, more expensive silver brass version. I personally find that the black version suits the A7r II design better. Note that the silver version doesn’t come with a silver hood for some unknown reason. There are two front caps included in the box, one of which is made of metal and fits over the metal hood. 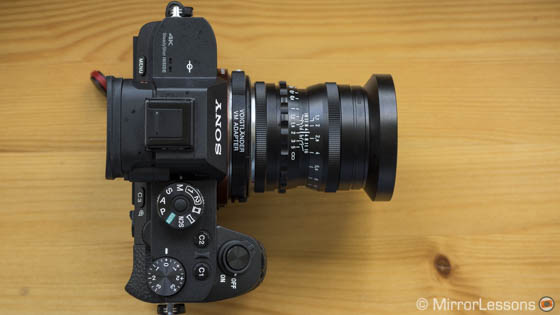 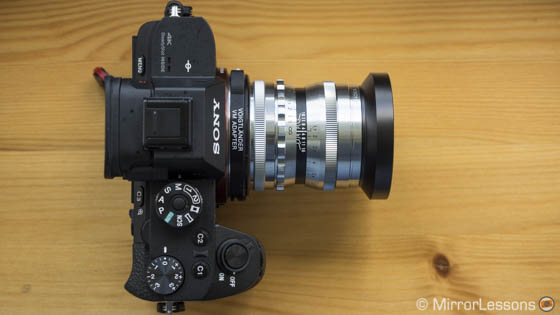 On the A7r mark II, make sure to select the focal length manually in the Steadyshot menu so that the camera can use the internal stabilisation correctly. I generally managed to get sharp shots down to 1/8s but you can also push it to 1/5s.

I am going to say it right away: there aren’t a lot of negative things to highlight when it comes to the optical performance of this lens. I enjoyed testing it and it is actually one of the best 35mms I’ve had the chance to use.

As usual with a fast lens, the first thing I am interested in checking is how good the performance is wide open and this is the first aspect that really surprised me with the Ultron 35mm. At f/1.7, the lens is already very sharp at the centre.

The performance at the centre remains constant throughout all the aperture range. It peaks at around f/4 but the difference at f/1.7 is not a lot. Past f/8 we start to detect some diffraction that becomes more noticeable at f/16. The corners suffer from astigmatism at the fastest apertures and the performance is worse than at the centre partly because of field curvature. The only apertures at which the result is almost perfect are f/8 and f/11.

The lens can focus as close as 50cm which is perhaps the only negative point I have to mention. I always prefer a lens that gives me the option to focus closer because I like to play with shallow depth of field. That being said the 35mm f/1.7 not only maintains excellent sharpness at the closest focus distance but also renders a pleasant bokeh. It is soft with smoothed rounded specular highlights and soft edges. At the corners these specular highlights are slightly more distorted (cat’s eye form) which is caused by vignetting. The lens is reasonably capable of separating the subject from the background between f/1.7 and f/2.8.

Vignetting is present but on the A7r mark II it is not too harsh and can be easily corrected with Lightroom and the dedicated lens profile without any colour cast.

Slide between the two images below to see how vignetting gets corrected easily with the lens profile in Lightroom CC.

You can find some small traces of longitudinal chromatic aberration at slower apertures such as f/8 or f/11 in high contrast zones and backlit situations. Once again this can be fixed in Lightroom.

Distortion is minimal and that is another good point about this Ultron lens. There is some slight barrel distortion but you can get rid of it easily. I admit that most of the time it was so mild that I didn’t feel the need to remove it anyway.

Finally, the lens also has excellent flare resistance. I admit I didn’t get much of a chance to test this aspect properly because of the lack of good weather over the past few weeks. However when the chance did present itself, I only noticed some slight ghost and veiling flare in a couple of images. The lens can also render a nice star flare at the slowest aperture.

The 35mm f/1.7 Ultron really surprised me. It is very sharp, renders a pleasant bokeh and doesn’t present any other significant problems except some vignetting that can be easily fixed in post production. I’ve had the chance to test different 35mm lenses on the Sony A7 series and this Voigtländer Ultron version is probably the one I appreciated the most as far as optical quality is concerned.

The main negative aspect is the focus ring. It lacks some smoothness, and it is not comfortable to use because of its position (too close to the camera body) and the indented design. I could also mention the minimum focus distance of 50cm which is somewhat limiting for close-up shots.

The last thing I can add is my sincere hope that Voigtländer will release an E-mount version with electronic contacts so that we can have complete exif data and better stabilisation from the camera if the lens also transmits the focus distance.

What I like about the Voigtländer 35mm f/1.7 Ultron Aspherical:

What I don’t like about the Voigtländer 35mm f/1.7 Ultron Aspherical:

As always, a big thank you to Flaghead Photographic Limited for sending us the sample.