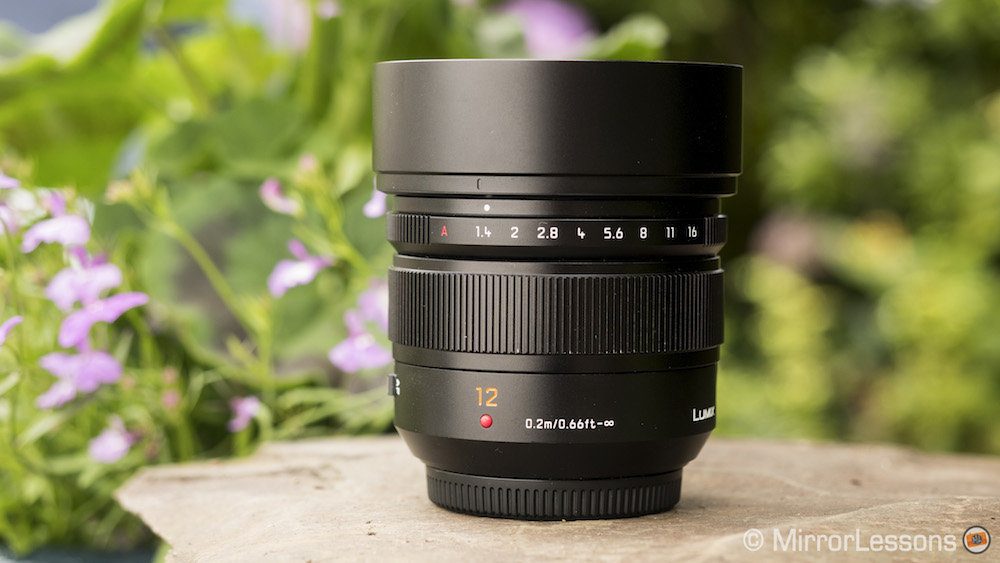 There are many great lenses in the Panasonic Lumix G catalog, but none so prestigious as the six produced in partnership with Leica. The Panasonic Leica DG Summilux 12mm f/1.4 ASPH, hereafter known just as the 12mm f/1.4 to simplify things, is the latest addition to the Leica series, and claims the title of the widest and brightest autofocus rectilinear lens for Micro Four Thirds.

On a personal note, I have to say that I was very excited to test out this lens as I’ve always had a great affinity for this field of view (24mm in 35mm format equivalent). Mathieu too has very fond memories of using just his Nikkor 24mm f/1.4 during our first trip to Canada together four years ago, so using this particular fixed focal length sort of felt like coming home for both of us.

Below you can check out our video review of the 12mm lens.

The 12mm f/1.4 has been constructed to a standard one could only expect from a Pana-Leica product. It features a full-metal build with a dust and splash proof design that, when matched with a weather-resistant body like the GX8, is able to withstand whatever the weather – even the Welsh weather – throws at it.

Close to the end of the barrel we find a nicely damped clicking aperture ring with clearly marked 1/3 stops from f/1.4 to f/16 plus an A (automatic) value. It is a practical addition because it leaves the camera’s dials free to change other settings. However, I find that there isn’t sufficient resistance between clicks, so it is easy to accidentally pick a value that is “almost-but-not-quite” the value you were hoping to use. It is also worth noting that on Olympus bodies, aperture is controlled by the body alone, not the aperture ring.

Next to it is a ribbed “fly-by-wire” focus ring that is precise and neither too loose nor too stiff, though it does take a number of turns to go from infinity to the closest focus distance.

The discreet AF/MF switch on the left-hand side of the barrel is also a boon as you can bypass going into the menu to change between the auto and manual focus settings. All it is missing is a distance scale, which can actually be found on the M.Zuiko 12mm f/2, this lens’ main rival within the Olympus line-up.

Compared to some other Micro Four Thirds primes, the 12mm f/1.4 is quite large and heavy, weighing 335g and measuring approximately 70mm from the tip of the lens to the base of the mount. Still, I found that it balanced nicely on the GX85, and was an even better fit for the OM-D E-M1 with its prominent grip.

It comes with a 62mm filter thread and a detachable metal lens hood that protects the front element and reduces flare to some extent (but far from completely as we’ll discover later on).

Through the lens: Optical quality

The 12mm f/1.4 features 15 elements in 12 groups consisting of 2 aspherical lenses, 1 ED lens, and 2 UED lenses. In layman’s terms, all this actually means is that the lens is designed to deliver the highest optical quality possible with little distortion or chromatic aberration and excellent contrast and sharpness from corner to corner. Its rounded 9 blade aperture also promises a smooth and beautiful bokeh.

On all these fronts, the lens certainly delivers. Sharpness at the centre peaks at around f/4 but is only a shade worse at f2, f/2.8, f/5.6 and f8. Diffraction begins to appear at around f/11 but the only aperture I’d consciously avoid is f/16. Corner sharpness is also very good between f/4 and f/8 but is visibly softer at f/2 and f/16.

You can see a full series of images taken at the various apertures here.

As for the maximum aperture of f/1.4, it is only marginally softer than f/2 across the frame, even at its closest focus distance, and is extremely fun to use if you want to separate your subject from the background or add some shallow depth of field.

Having that extra stop of light is also very helpful in low-light situations where you want to keep your ISO value as low as possible. For example, during our trip to Chirk Castle in Wales, I was able to combine the f/1.4 aperture with the GX85’s 5-axis in-body stabilisation to take a sharp image inside a pitch-black imitation WWI bunker at ISO 200.

Since we were lucky enough to have a clear night during our testing period, I was also able to try out the fastest apertures for astrophotography. Looking at the f/1.4 examples, you can see some slight chromatic and comatic aberrations in the corners but once you stop down to f/2, the performance improves.

The excellent colour and micro-contrast of this lens is exemplified by the garden example below taken in Aberystwyth. It is bright and punchy with clearly defined details in the blade of grass and flower petals.

Although this lens isn’t meant for macro work, it has a decent minimum focus distance of 20cm, allowing you achieve a nice bokeh with the right background.

At the fastest aperture, the specular highlights (a.k.a. bokeh balls) are fairly round toward the centre of the frame and only lose their shape a little as you move towards the edge of the frame. You’ll also notice some mild bokeh fringing around the edges. Thankfully there is no sign of the “onion ring” effect some bokeh balls have.

At f/2 and f/2.8, the bokeh remains pleasant, though the bokeh balls become visibly smaller.

The only time I noticed chromatic aberration (specifically purple fringing) was at the fastest aperture when facing direct sources of light. By f/2.8 it is no longer relevant.

Distortion is very well-controlled and perfectly in line with what you’d expect from a wide-angle prime such as this. Since the JPGs and RAW files contain distortion correction data, you won’t come across any relevant distortion in your images.

Images taken at f/1.4 appear about 1 stop darker in the corners due to vignetting. However, this, like distortion and chromatic aberration, can easily be corrected in your favourite post-production software. 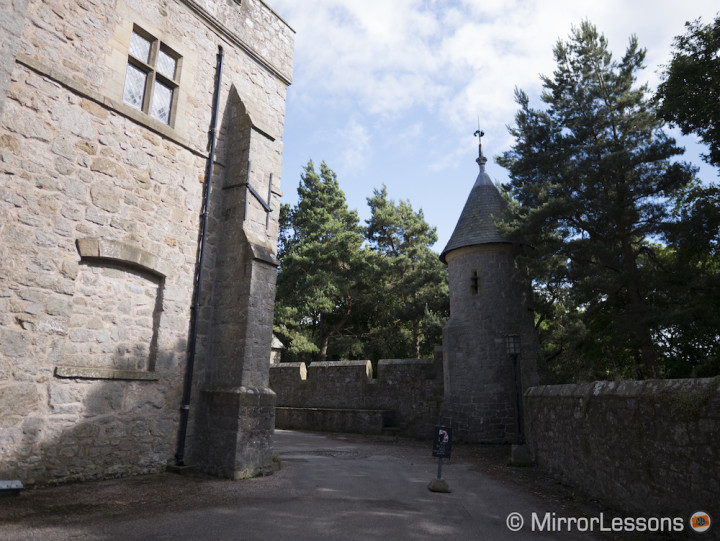 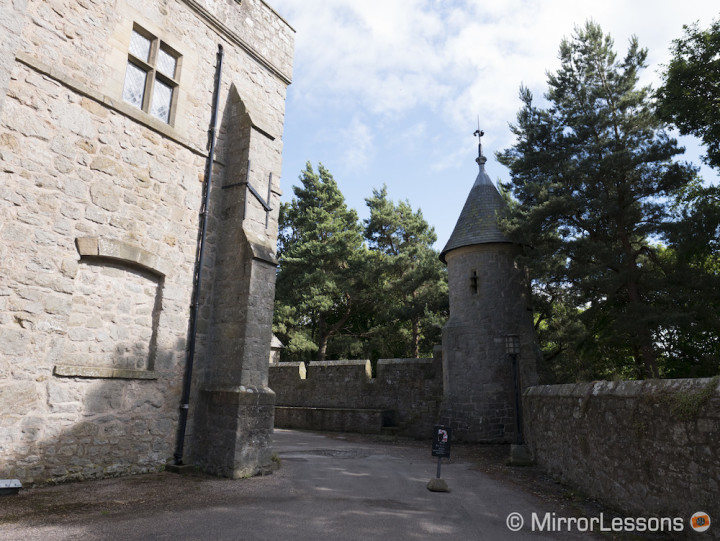 As you might have guessed, I’ve saved the worst for last: flare and ghosting. I encountered a lot of both in my tests when shooting toward direct light sources. It comes in many forms, the most common being rainbow flare. Stopping down the aperture doesn’t fix the problem but rather exacerbates it in some cases.

Funnily enough, I was testing the Lumix 12-60mm kit lens at the same time as the 12mm f/1.4, and generally speaking, the kit lens controlled flare much more effectively than its high-end counterpart.

Still, there is a silver lining – if you can ignore or reduce flare by adjusting your composition, you’ll notice that the lens produces quite a nice sunstar!

Autofocus performance and other considerations

Incorporating an inner focus drive system and a stepping motor, the 12mm f/1.4 offers quick and silent autofocusing regardless of whether you use it on one of the latest Micro Four Thirds bodies like the GX85 or an older model like the E-M1. It is also compatible with the sensor drive at a maximum of 240fps (only valid for Panasonic cameras).

In use, the lens is indeed quick to lock onto a subject in all light conditions. The only time it struggled a little was inside the aforementioned bunker which was so dark that not even the human eye could decipher much detail.

The continuous autofocus also worked well for video, though I have to say that I preferred using the provided manual focus ring to make precise adjustments to my focus point. It was in situations like this that the AF/MF switch really came in handy, as I could seamlessly switch between MF for video and AF for stills.

The lens doesn’t incorporate built-in optical stabilisation (OIS) but this matters little on cameras that have in-body stabilisation such as the Lumix GX85 or OM-D E-M1. With just the in-body stabilisation, I managed to take sharp shots at shutter speeds as slow as 0.5s and I’m sure I could have pushed it further. The lack of OIS can prove more problematic on non-stabilised Lumix bodies such as the flagship GH4 if you plan to do a lot of hand-held work.

Mathieu and I owned the M.Zuiko 12mm f/2 for a couple of years until we finally sold it to fund new gear to test. As such, we weren’t able to compare the two lenses side-by-side.

The primary advantage of the M.Zuiko version is its portability. At 56mm in length and just 130g in weight, it is the kind of lens you can place inside your camera bag and forget about until it becomes necessary. The same cannot be said for the Panasonic version whose bulk and weight is much more noticeable.

So, why go for the Panasonic version? Well, it is a premium product. It provides better sharpness across the frame, a faster maximum aperture for better subject isolation and out-of-focus rendering, and a more durable construction. Being a very specific niche product, it belongs in the hands of a professional or advanced amateur who uses this focal length all the time, while the Olympus version, at two-thirds of the price, targets the masses.

For an excellent side-by-side comparison between the two lenses, we suggest visiting Camera Labs’ full review of the 12mm f/1.4.

There isn’t much more to be said: the 12mm f/1.4, like the other Pana-Leica lenses that came before it, lives up to the Leica name and reputation.

From its premium build quality and quick autofocus to its performance at the fastest apertures and sharpness across the frame, almost everything about this lens oozes quality and perfection. And even though it is larger and heavier than the most compact primes for the system, it is still much smaller and lighter than an equivalent 24mm f/1.4 for full-frame.

Indeed, were I a professional landscape, astrophotography or events photographer looking to eke the best image quality out of my Micro Four Thirds camera, I would have no hesitation in adding this lens to my kit.

The biggest disappointment is the lack of flare resistance in direct sunlight but this is a problem that afflicts many Micro Four Thirds lenses from Panasonic. You can reduce flare by slightly adjusting your composition but this isn’t always convenient if you want to include very specific elements in your scene.

Finally, we have the price, which is a direct reflection of the premium status of this lens. At nearly $1,300 US, it costs almost double the price of the Lumix GX85 body itself.