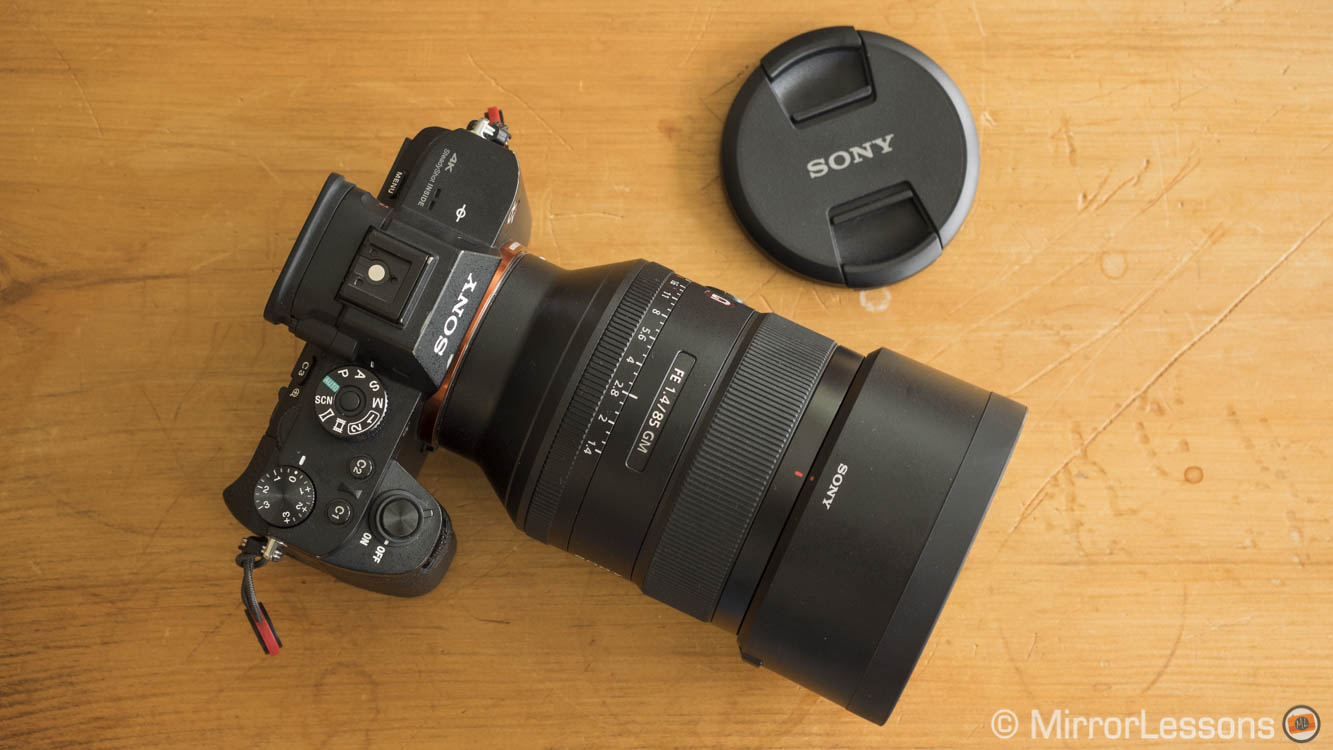 The Sony 85mm GM is the long-awaited f/1.4 portrait lens for the full frame E-mount system. It is part of a new family of professional lenses called G Master, which is a step above the G series. In addition to the partnership with Zeiss, Sony decided to create its own set of premium lenses to show that they are capable of creating high quality lenses of their own.

If you follow MirrorLessons, you have probably seen our in-depth comparison with the Zeiss Batis 85mm that we recently published. In this article, I go more in-depth about the Sony lens to analyse all its pros and (very few) cons.

The Sony G Master is a big fat lens. Once again it doesn’t provide an advantage in terms of size and weight in comparison to a DSLR system. Actually it is heavier and larger than the Nikkor 85mm 1.4 but at this point I am not surprised: Sony is not aiming for compactness anymore. The metal build quality feels very robust with sealing against dust and moisture. It comes with a robust plastic hood with a locking mechanism. 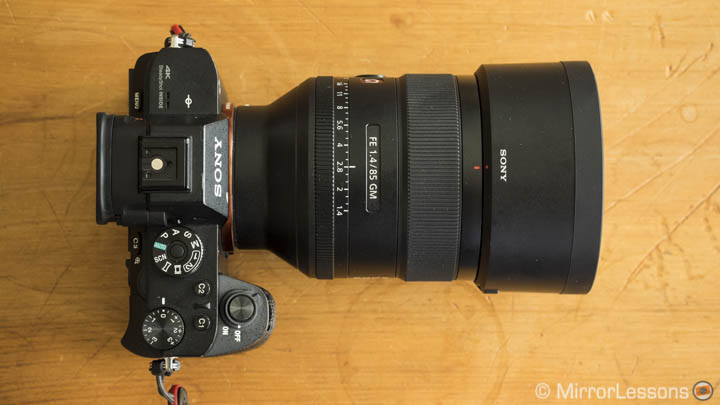 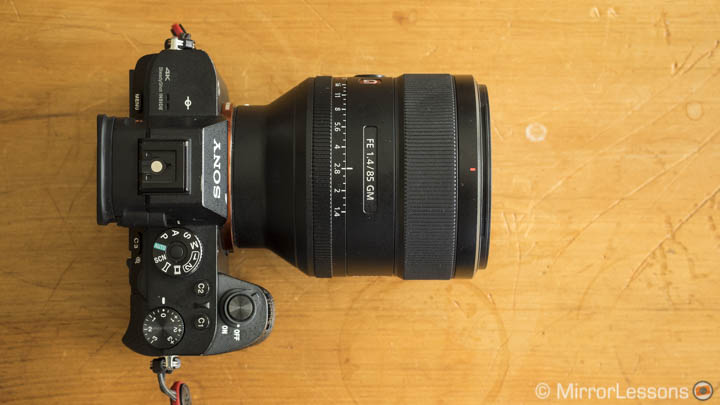 The lens has been cleverly designed. You get an aperture ring that is smooth, precise and nice to use. It moves in 1/3 steps and can be de-clicked for video via the dedicated switch. We also find an AF/MF switch and a focus hold button. The latter can be very handy when shooting portraits to quickly focus and re-compose without the risk of losing the acquired focus distance.

Another pleasant surprise (like the 24-70mm 2.8 GM) is the focus ring. Despite being a “fly-by-wire” type, it is extremely precise to use for stills and in video mode. You can perform smooth and slow focus transitions. Furthermore the lens doesn’t breathe much considering that it is a photography lens and not a cine lens. This shows how careful Sony has been to design a product that works well in both situations. 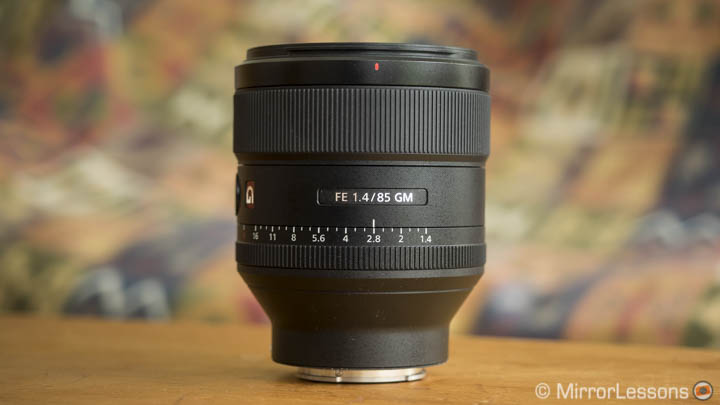 With such a lens, the first thing we want to know is how good it performs wide open. My first impressions at the European press event were already positive. Testing the lens confirmed that initial feeling but I also noticed a lack in contrast. It’s not a lot but visible enough in comparison to other apertures and lenses like the Batis 85mm.

However I don’t necessarily consider this a negative thing: portrait photographers might appreciate a lens that retains a good level of detail wide open but gives less contrast to preserve smoother skin tones. You can always add some contrast in post as you can see below.

If we forget 100% crops and concentrate on the entire image, we can see that the lens performs very well at f/1.4. The perception of sharpness and detail is great, subject separation is excellent and the overall look is very pleasant.

It is also important to remember that light is very important in this case and can help to render details either more or less visible. You can see this especially in the picture below that was shot in a studio environment with controlled lights. Look at the details in the eyes and the beard.

The performance improves from f/2 and f/2.8 especially where the lens gains more contrast and becomes razor sharp. So while the performance wide open is excellent, the best sharpness is found at f/2.8.

The results remain constant up to f/16 where there is very little diffraction. You will probably never shoot at the smallest aperture with such a lens but it just shows you how good the optical quality is. The performance is the same at long focus distances as well.

Concerning the bokeh, the 85mm GM gives you some sort of “surgical” precision. The out of focus specular highlights are almost perfectly rounded at the fastest aperture and maintain an excellent geometrical form even at slower apertures. There aren’t any onion rings: the circles are plain and smooth and you will only notice a little bit of bokeh fringing in some areas. The background is uniform without any swirly effect.

From f/4 the bokeh balls start to loose their circular form and take on a more hexagonal shape. It become more noticeable from f/5.6.

Bokeh can be subjective and sometimes it takes very precise examples to show the real “advantages”. Personally I wouldn’t choose a lens just for the bokeh because what matters is the subject in the foreground – not just the background. But I do admit that this lens is one of the best I’ve tested from a purely “technical” point of view.

At longer distances, the lens manages to separate the subject from the background very well even with a full body shot. This is one of its strongest points. Once again the results are slightly soft at 1.4 but still more than usable.

The lens can focus as close as 80cm which is decent but not exceptional. You won’t be able to take extreme close-ups of a person’s face for example.

At f/1.4 there are traces of longitudinal chromatic aberration. You will need to fix it manually in post with the RAW file and it is visible in the JPG as well. However it happens mainly in strong backlit situations. From f/2.8 the results are perfect.

Vignetting is present at the fastest aperture but improves a lot from f/2. Applying the lens profile produces an excellent result even at f/1.4, while the camera doesn’t do as good a job with the OOC JPG.

Finally, the flare resistance is excellent but I came across a few streaky lines in direct sunlight.

The Sony 85mm focuses fast in single AF when using the Eye-AF and in continuous AF. It’s not a sport lens by any means but it proved a reliable companion for events and action of different kinds. For video the performance is a little bit worse. It performs slightly faster on the a6300 than the A7r II.

The lens lacks optical stabilisation. On the A7r II with its 5-axis in-body stabilisation, I managed to bring home a sharp shot taken at 1/10s. With non-stabilised E-mount bodies, I wouldn’t go under 1/80s.

Let’s give Sony credit: the brand has created an excellent portrait lens. There is little to complain about concerning optical quality, if not the lower contrast at the fastest aperture (which is not necessarily a negative thing). The lens is easy to use thanks to the various buttons and rings, and the focus ring is one of the best fly-by wire types I’ve tested along with that of another G Master lens: the 24-70mm 2.8.

If we really want to rant about something, we have the most obvious (but also repetitive) aspects: the lens is large, heavy and expensive. Optical stabilisation would have been a welcome addition but I guess Sony wanted put all its energy into providing the best optical quality.

Honestly, the lens’ biggest issue can be found by comparing it to a similar product. In our comparison with the Batis 85mm, we saw that the difference in optical quality isn’t huge. In fact, the Zeiss lens is sharper wide open with more contrast. The Sony stands out for its almost-perfect bokeh circles and uniformity. The Zeiss has a few extra advantages like its optical stabilisation, its smaller and lighter design and last but not least, its price.

Yes, the Sony 85mm has a faster aperture, and while that difference doesn’t equal a full stop of light, the extra shallow depth of field helps you to isolate a subject that isn’t close to you. The other differences are subtle. Experienced portrait photographers will know what to choose. Either way, you can’t go wrong with either lenses. If money is not an issue, the 85mm is one of the best portrait lenses on the market right now.