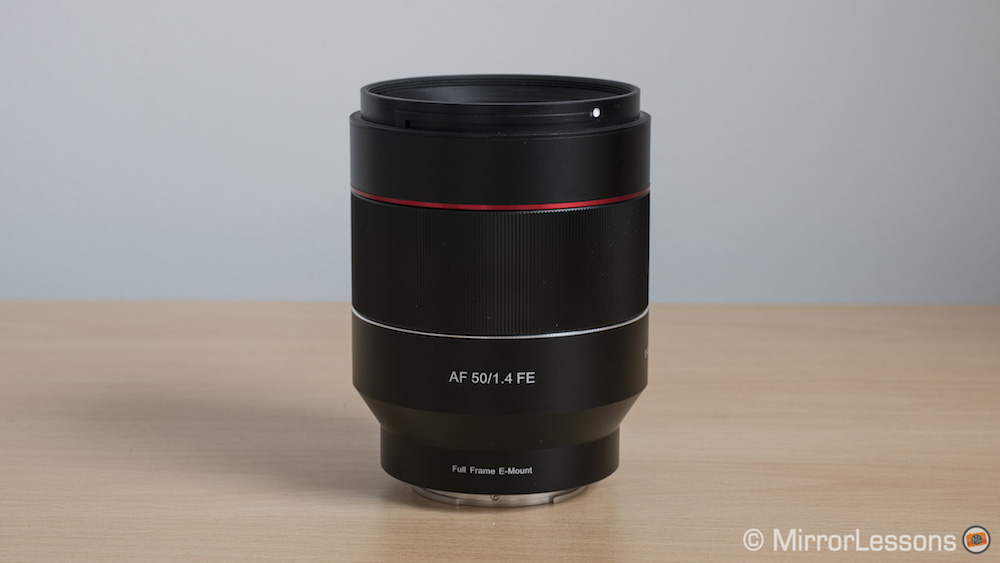 Samyang-Rokinon is a leader in the production of high quality, affordable manual focus lenses for digital cameras, so it came as a surprise when the brand announced not one, but two autofocus lenses for Sony E-mount this year: the wide-angle 14mm f/2.8 and the standard 50mm f/1.4, the latter of which is the subject of our review today.

In all honesty, what intrigued me even more than the brand’s debut on the autofocus scene was its decision to give its first AF lenses to the E-mount rather than the more established EF and F mounts from Canon and Nikon respectively. Though I’m sure autofocus lenses for DSLRs will come in the near future, I take this move as a sign that Samyang-Rokinon, like many other third-party lens manufacturers, has great faith in the continued success of the E-mount.

So, what about the 50mm f/1.4 AF itself? Is it a lens worthy of the E-mount and can it complete with Sony’s own 50mm offerings, of which there are already four? Let’s find out! 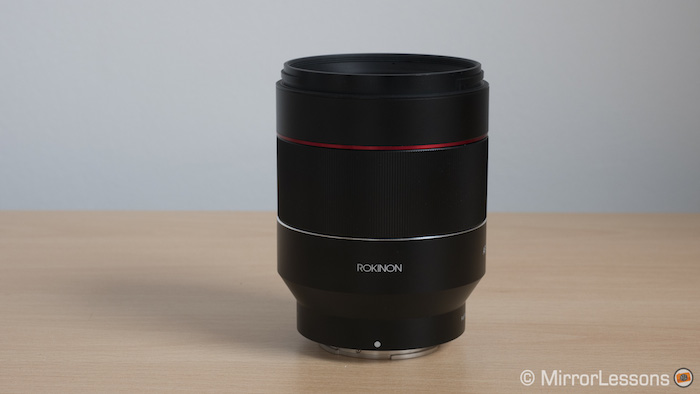 The first thing you’ll notice is that the 50mm f/1.4 is quite a large and heavy prime lens, so much that it overwhelms the smaller APS-C series. If you compare it to the Sony 55mm, for example, you can see it is twice the size and weight (although to be fair, the latter has a 1.8 aperture). For this reason, I’d only recommend using it on Sony’s full-frame cameras or perhaps the new a6500 which has a larger grip.

Though it has a solid metal construction, it isn’t dust or moisture resistant.

The barrel is sparsely populated, with no aperture ring, distance scale, depth of field scale or physical controls. There is, however, a large fly-by-wire focus ring whose textured surface makes it easy to grab and turn. 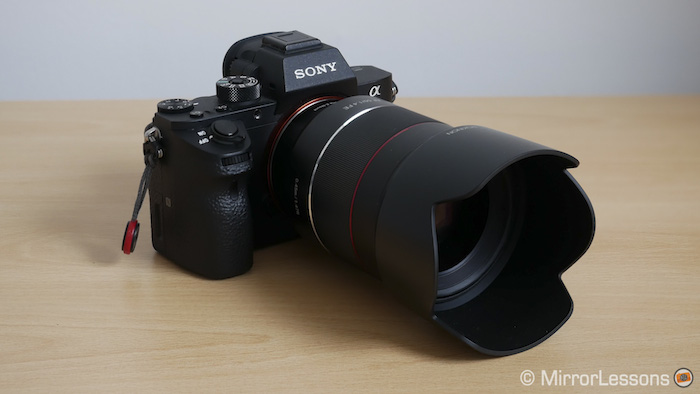 The lens comes with a plastic petal-shaped lens hood that makes the lens look even larger than it actually is, but combined with the UMC Super multi-layer coating on the front element, it does an excellent job of mitigating flare and ghosting. In fact, during our entire testing period, we didn’t come across a single example of flare despite having shot directly into the sun multiple times. 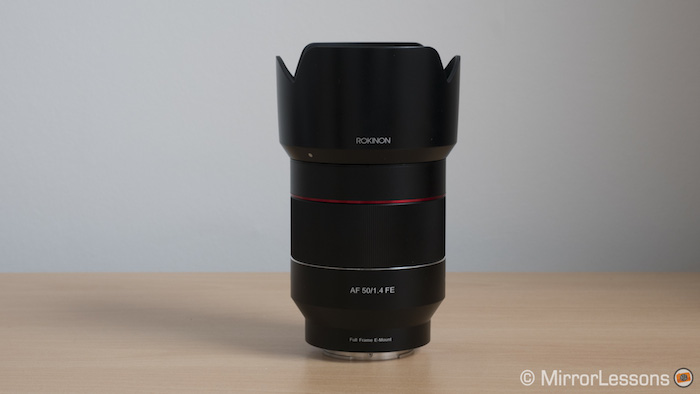 The lens also features a 67mm filter thread, so you can easily attach ND filters such as the Lee Seven5 filter set to create long exposures. 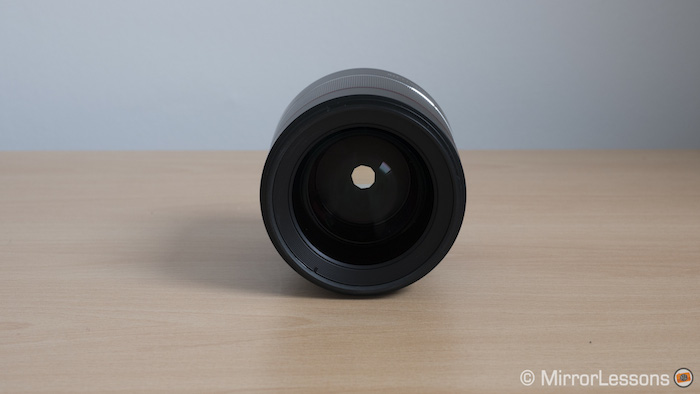 Optical quality – Through the lens

The Samyang-Rokinon 50mm has an aperture range of 1.4 to 16, making it one of the fastest standard primes for the E-mount.

Though f/1.4 is the softest aperture, I still find it usable. Stop down to any value between f/1.6 and f/2 and you’ll notice an improvement. The best results can be achieved between f/2.8 and f/8, and peak sharpness occurs at around f/5.6. By f/16 you will start to notice some diffraction. This applies to both short and long distances.

Achieving a shallow depth of field with the Samyang is easy thanks to its fast 1.4 aperture.

The specular highlights are round and uniform at the centre, only becoming more oval shaped at the edges and in the corners. The more you stop down, the more uniform they become.

As for the out-of-focus rendering, it is pleasing to the eye at the fastest apertures thanks to the smooth and natural transitions between elements. The lens’ ability to separate the subject from the background is also very good.

Chromatic aberration is present up until around f/4 and it can be quite invasive at the fastest apertures. While much of it can be eliminated in Lightroom with the dedicated lens profile and chromatic aberration removal tool, you may find that some stubborn traces remain.

Some very minor barrel distortion and heavy vignetting is also present but if you shoot in RAW format, it can be easily removed with the dedicated profile in Lightroom. If you usually shoot OOC JPGs, make sure that all the lens corrections are turned to Auto in the camera menu so that they too get corrected. 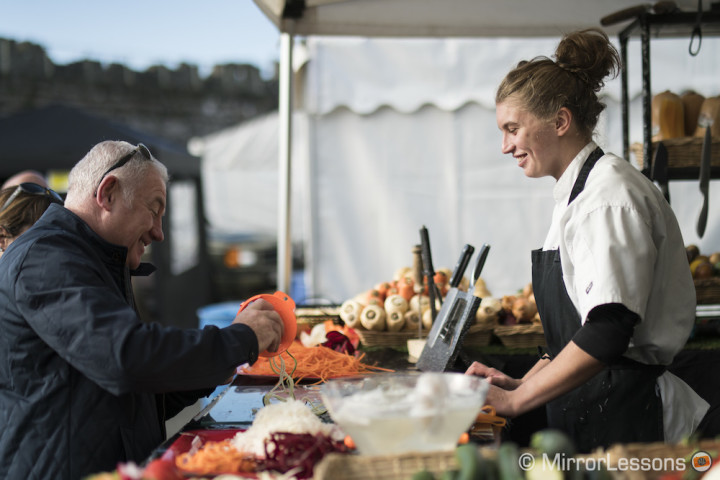 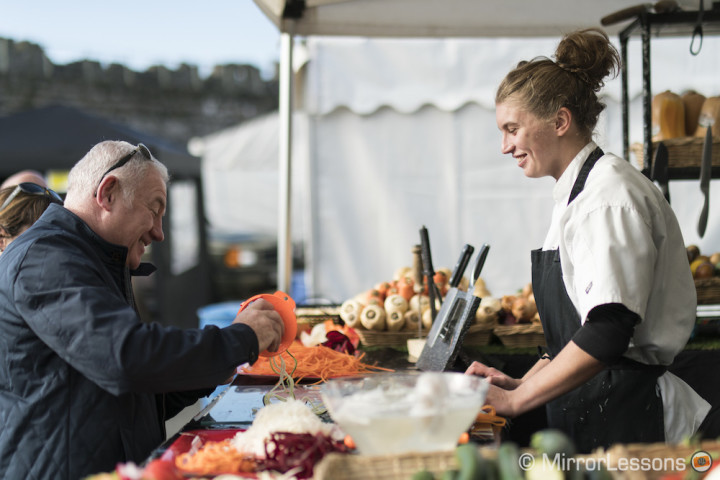 Considering that this is one of Samyang’s first autofocus lenses, I found the performance very good overall.

In single and continuous autofocus for stills, it locks onto the subject fairly quickly but isn’t quite as fast as a native Sony lens. For video, it is quick in good light but takes more time to change the focus point in poor light conditions.

Below you can see a burst taken in C-AF with the a6300 of Mathieu running towards me. While most shots are in focus, the camera loses track of the subject near the end of the burst. (Note that Mathieu had not yet reached the minimum focus distance of the lens, which is 45cm.)

The biggest disappointment is its noisy autofocus mechanism for stills in AF-S, AF-C and MF modes. It is clearly audible in very quiet places, which defeats the purpose of having a camera with a silent electronic shutter.

I’m glad that Samyang-Rokinon has ventured into the world of autofocus lenses. For a first attempt, I feel they’ve done a good job with the 50mm f/1.4 but there is still some room for improvement, especially concerning the noisy autofocus mechanism. It may annoy video shooters in particular because the noise is audible in your footage.

Another point to consider is the size and weight of the lens. While it is a good match for Sony full frame cameras, it tends to overwhelm cameras in the APS-C range.

Otherwise, the lens delivers where it counts: it has good overall optical quality, a fast maximum aperture and reasonably quick autofocusing, and is attractively priced at around $700, which is about half the price of the Sony Zeiss 50mm f/1.4 equivalent.

What I like about the Samyang-Rokinon 50mm f/1.4 AF

What can be debated about the Samyang-Rokinon 50mm f/1.4 AF

What I don’t like about the Samyang-Rokinon 50mm f/1.4 AF