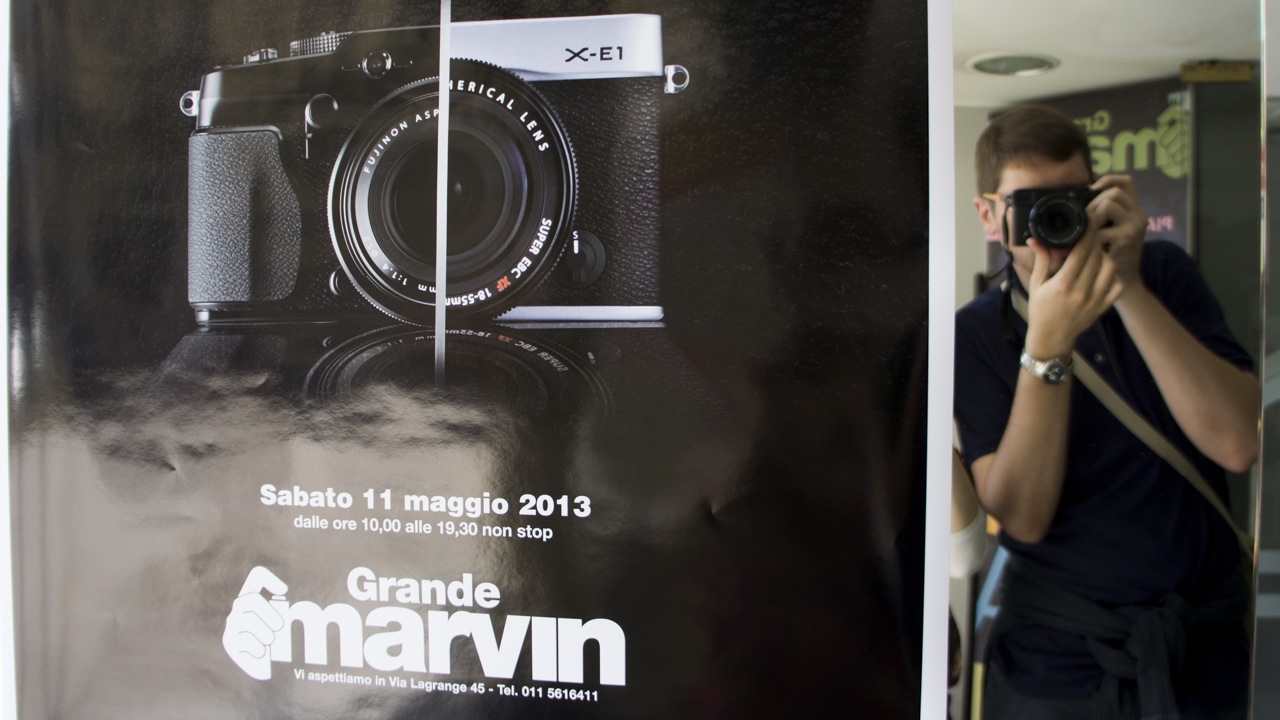 Update: We had a second opportunity to use the 55-200mm during the Fuji eXperience Tour here in Italy. Click here for part two!

My original plan for this lazy Saturday was to finish my article about the X-Pro 1 which I tested last week, but then I heard about the Fujifilm X Day at the camera store Grande Marvin here in Turin where Fujifilm was showcasing its entire X camera line and lenses. Of course, my priorities took a 360-degree turn!

At the event, I had the chance to talk with a representative of Fujifilm Italia who divulged some very interesting information about possible releases we may see in the future. And of course, I tried different products, including the brand new 55-200mm zoom for the X-Pro 1 and X-E1!

I was given a mere ten minutes to try it, as other people were waiting in line to test it as well, and it was the only sample available. Also, the lens was a prototype, very close to the final version.

In that brief time, I used it on an X-Pro 1 and took a couple of pictures around the block. The lens is not too heavy and I find it well balanced with the X-Pro 1 in terms of both weight and ergonomics. The zoom ring wasn’t as smooth as others I’ve tried, but it could be related to the sample I used. Also, the aperture ring, as with other XF lenses, is a little bit too soft and you can inadvertently change the aperture. Since I had such a short window of time, I concentrated on bringing home some interesting shots. I wanted to try the zoom at its fastest apertures but I didn’t realize that I had accidentally changed it to 5.6 the whole time I was out with the lens. Anyway, the blame’s on me!

This lens is the first telephoto lens for the X system and Fuji seems to have made it right: the quality is there. It is very sharp, with a nice bokeh that seems to be more pleasant to the eye than traditional telephoto zoom lenses without the constant aperture like this one.

The lens is stabilized and while I didn’t try it much, I took a few shot at less than 1/100s and it responded very well.

The minimal focus distance is more than acceptable for this type of lens, but don’t expect close macro performance here.

It is indeed an interesting lens for those interested in chasing animals in the park or for portraits. Its non-constant aperture won’t make it ideal in low-light performance. As for the autofocus, the X-Pro 1 handed to me had the latest firmware on it that support this new lens, and that is suppose to enhance the autofocus on the X-Pro 1 as well. Again, 10 minutes isn’t enough to judge a lens, but it seems that it possesses the normal Fuji autofocus speed found in the X-pro line, so nothing terribly fast.

Ok, so tell us about the interesting news!

While chatting with the Fuji rep, I asked if he had any news about the release of an updated X Pro-1, and on the other lenses Fujifilm is planning to release that are already showing on the Lens Road Map. According to him:

Of course, he couldn’t confirm any of this and some of these points are probably more his personal assumptions than fact, but they are still interesting rumors worth mentioning.

My two cents regarding these rumors are:

Another lens worth mentioning: the XF 14mm f/2.8 R

While I was there, I also tried some other Fujinon lenses. The 14mm is definitely a lens I would buy if I had an X-Pro 1 or X-E1. It definitely suits my needs when it comes to wide angle shots – great for landscapes and urbanscapes. It has the classic distortion of any extreme wide angle and I like it a lot. I just did a couple of shots in the short time I had, so I cannot tell you more, but I really like what I have seen!