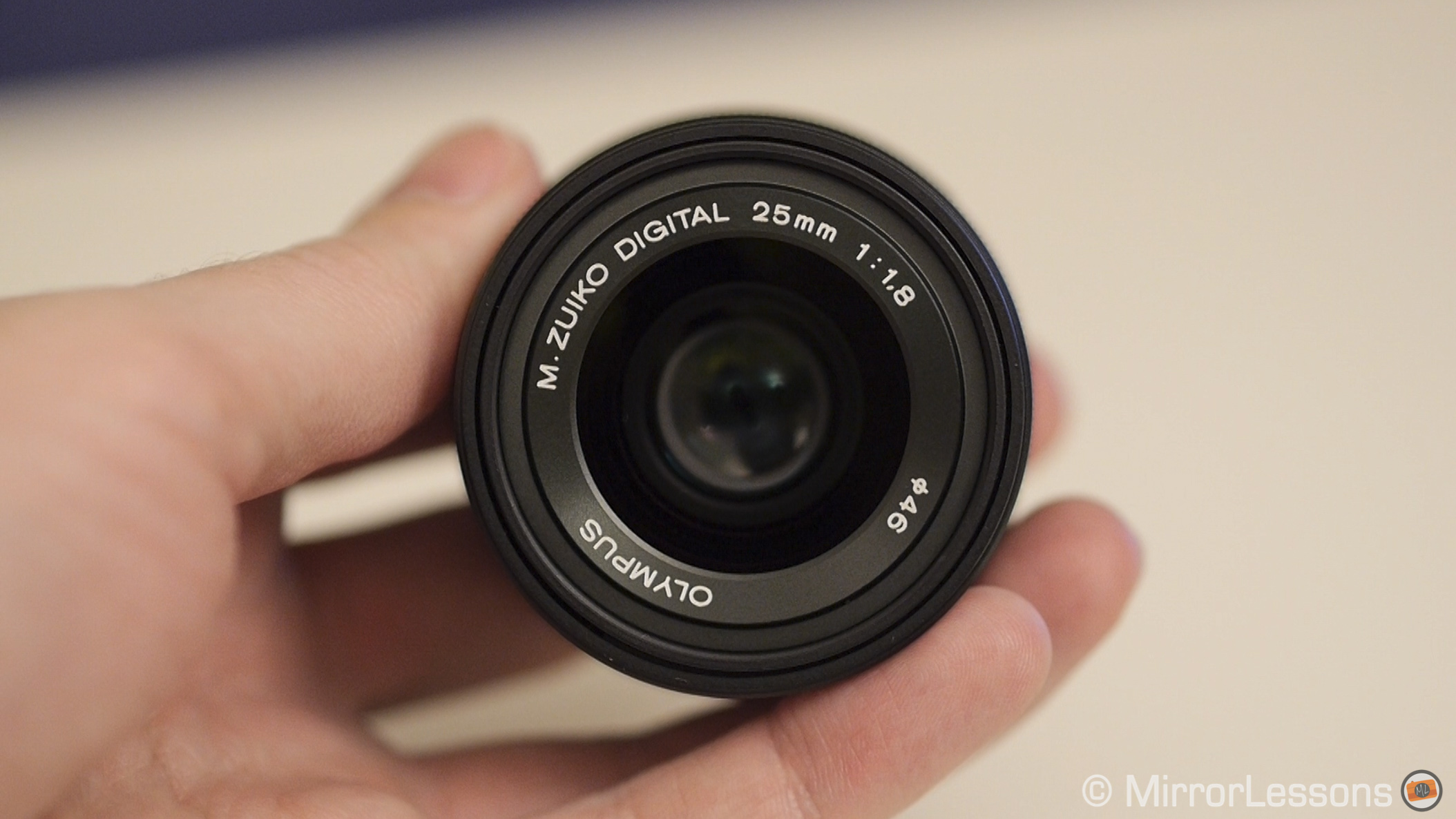 A 50mm lens on 35mm format is the closest field of view we can get to the human eye. It is the focal length often found on the ideal kit lens for old SLR cameras and has always been one of the cheapest prime lenses you can buy for your camera (depending on the aperture). It is the standard lens by definition and you’ll most likely find it inside many a photographer’s camera bag. Up until now Micro Four Thirds users only had two options: the Panasonic Leica 25mm f/1.4 (equivalent to 50mm on MFT format), a great lens but expensive if you consider the system and the type of lens, and the Voigltänder Nokton f/0.95, a manual focus only lens that costs almost $1000.

The 25mm was missing from the Olympus lens lineup but the gap has finally been filled. Along with the OM-D E-M10, we had the chance to test the new M.Zuiko 25mm f/1.8 which, in many ways, was met with far more interest than the new camera itself.

Made of plastic but solid as a rock

On the build quality front, the 25mm is very similar to the 45mm f/1.8. It too is made of plastic, which is perfectly fine, but may have the tendency to deteriorate a little bit over time. For instance, we’ve noticed that the paint on our silver 45mm has begun to wear off along the edges. This has no bearing on image quality of course, but may detract from its aesthetic appeal.

Despite the use of plastic, the construction feels very good, and the mount is made of metal. Another advantage is that Olympus finally included a lens hood in the package. You have to unscrew the little plastic ring in order to mount the hood. It gives you that little extra bit of protection, which is always more than welcome when you’re out on a hike or in drizzly weather.

Internally, the lens features 9 elements in 7 groups with two aspherical elements. The front lens is concave and lets in a good amount of light in the corners despite the small diameter. It also has a 7 circular aperture diaphragm. Unlike the 12mm and 45mm, which were first released in silver and later on in black as a premium version, the 25mm lens is available in both silver or black right off the bat.

Through the lens: Image quality and performance

Fast apertures with this kind of focal length aren’t uncommon, but the first thing I like to check with a fast lens is its performance at the largest aperture because this may be one of the main reasons you are considering it for your collection. I can say that after two weeks of testing, the new 25mm didn’t disappoint me in the least. At f/1.8 it is very sharp with good rendering of detail.

There is almost no vignetting, but you can find traces of chromatic aberration at 1.8 especially if there is lots of light and you accidentally overexpose the picture. Nothing out of the ordinary here and if you stop down by one or two stops, the CA goes away.

Bokeh is often one of the aspects that is criticised for being poor or less pleasant with the Micro Four Thirds system but even with the smaller sensor, you can still get some very nice results with the right lens. The 25mm f/1.8 is certainly a very good example of this. The bokeh can be very pleasant and creamy if your focus distance is short enough. The minimum focussing distance of this lens is 25 cm. You may wonder why Olympus didn’t develop a faster lens than 1.8 such as 1.4, but I think that to make a real difference, they would have to go faster than 1.4 and the result would probably be a bigger and more expensive lens. Also, the 1.8 aperture is in the same range of the other M.Zuiko primes.

With regards to sharpness, you can expect the best results between f/4 and f/11. The results in both the centre and the corners are excellent. At f/22, diffraction and loss of details are more evident.

Contrast and colour rendering are very good and are easily comparable with the results from the other M.Zuiko primes such as the 17mm or 45mm. As for distortion, I didn’t find any unless you are at very short distance. Overall the performance of the lens is no short of brilliant.

The only flaw I found was the presence of purple flare, something that both Heather and I noticed since the first days of use. It isn’t the first time that I’ve noticed purple flare on Micro Four Thirds lenses but I was surprised to see that amount on the new 25mm, also because it has a special Zero Coating treatment that should reduce this kind of undesired effect. If you like backlit shots as I do, the purple flare can be very invasive if the light rays enter at a specific angle. In that case, slightly tilting the camera up or down will give you a more normal lens flare, so the problem is surmountable.

The autofocus worked really well with the E-M10 and E-M5. One of the characteristics of this new lens is that only the lens at the back moves, which also contributes to better image quality. The squirrel picture shown above and the one below ended up perfectly in focus on the first try, even though the little animal only stayed still for a matter of milliseconds.

This review is one of the fastest I’ve ever written, not because there isn’t much to say but because the lens works so well that there isn’t anything else to add. The M.Zuiko 25mm f/1.8 might rapidly become a classic lens in the MFT system, especially among those who enjoy this field of view. It is cheaper than the 25mm f/1.4 by Leica and its price might decrease like the 45mm f/1.8 did. This would make it just another example of an excellent compromise between image quality and price for the system.

Certainly many comparison questions have arisen, such as how the performance compares to the 25mm Leica. I haven’t had the chance to test them side-by-side thus far, so regarding sharpness and overall less performance, I cannot say anything yet. I don’t believe that a less-than-a-stop difference between 1.4 and 1.8 will make a huge difference to the background bokeh. I am more interested to see if the “Leica” touch adds something unique to the final images.

The Nokton 25mm f/0.95 by Voigltänder, on the other hand, is a very specific lens. It is manual focus only, not very sharp at its fastest aperture but delivers a unique look and has a very interesting bokeh. It is so different from the M.Zuiko 25mm f/1.8 that they aren’t really competitors.

If you are on a budget and love the 50mm equivalent field of view, I have no doubts about recommending this lens to you.