You are here: Home / In Depth / Welcome to LNDNWLK 2.0 – Taking online friendships offline 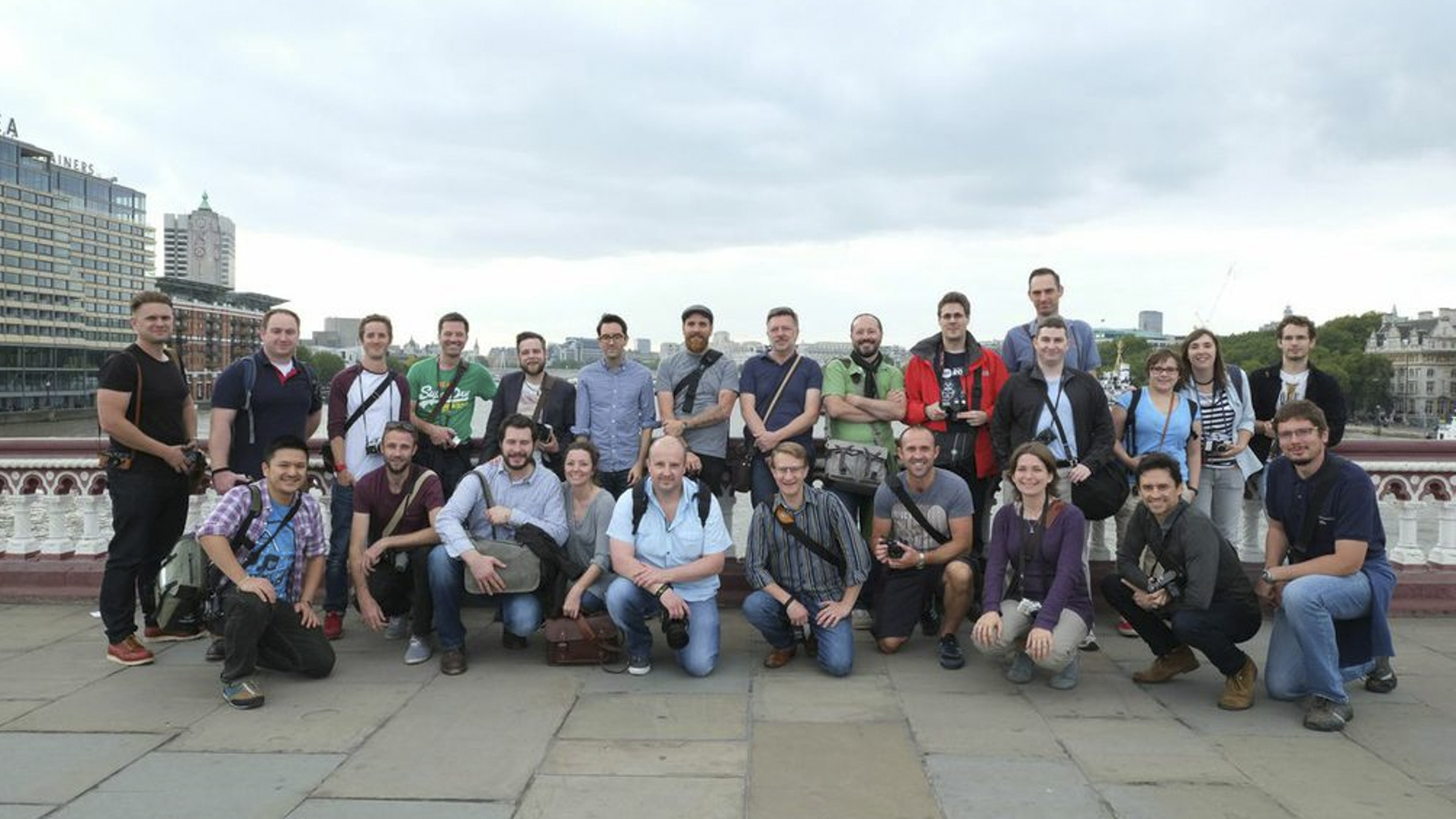 Too many times have I heard the complaint that social media, despite the connotation of its name, has rendered us more antisocial than ever before. Locked away in our rooms, we chat with individuals who play no part in our actual day-to-day existence, tricking ourselves into believing that our social life is much richer than it actually is.

This is why Mathieu and I are both firm believers that the “social media cycle” isn’t complete until online relationships are taken offline. As friendly as you can become with people via a social platform such as Twitter or Google+, there is nothing quite comparable to meeting someone face-to-face.

And we are not alone in feeling this way, as evidenced by the 27 photographers who attended the second edition of LNDNWLK, a photo walk around London we organised with our friends and fellow photographers Johnny and Rebecca Patience. We were delighted to see that this time, not only were there people who had attended the original LNDNWLK 1.0, but there were also many new faces, most from Twitter, others from  Google+, Facebook, our email lists, and so on. 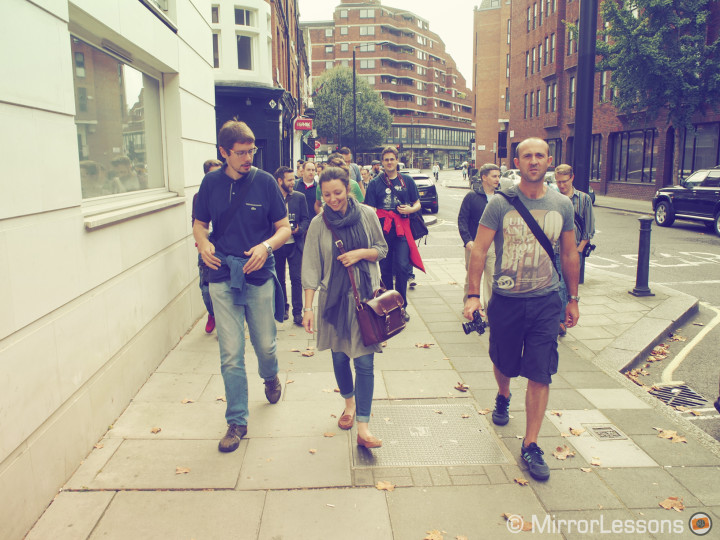 The day began with a one-hour film workshop held by Johnny Patience at the Stephen Bartel Gallery (SBG), which was attended by photographers of various backgrounds and levels of experience. Johnny has dabbled in most mediums, including digital, so it was interesting to hear his perspective on film photography, and the importance of finding the right gear and discovering your personal style. The workshop ended with a quick question-and-answer session during which Johnny fielded questions and those with experience in film added their two cents. All attendants received five rolls of film courtesy of Kodak and a discount voucher courtesy of Richard Photo Lab, the two sponsors of the event. 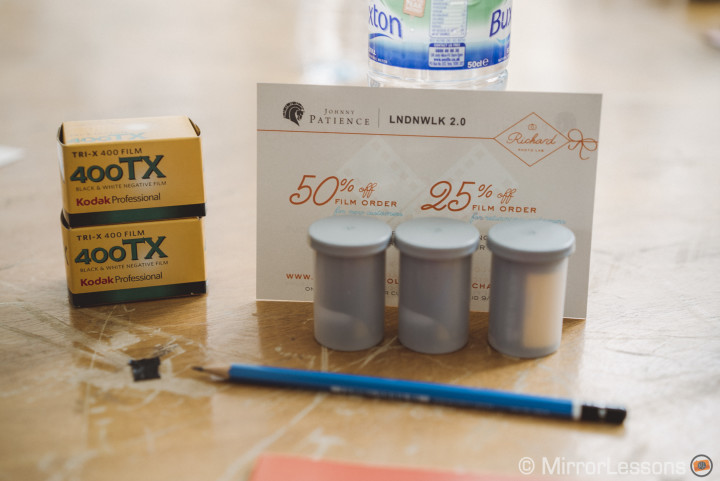 Following a quick lunch break, Stephen Bartel of SBG gave a talk about the ethos of his gallery and the current photographers on display. Unlike other galleries, SBG uses High Definition screens and digital technology to display the represented photographer’s work, which adds a modern touch to a business that has long been based solely around framed prints. Stephen is a lovely and knowledgeable person, and I highly recommend that anyone passionate about photography pay him visit.

Next came the moment that everyone had been waiting for: the three-hour walk from the gallery in the Pimlico area of London to Old Street where the Hoxton Grill was already preparing a three-course meal for a very hungry group of photographers. Much like last time, Mathieu and I didn’t get much shooting done, as we were too involved in talking with our new-found friends, but we were pleased to see that many of the attendees did take home some great shots. The mixture of sun and cloud made for some very interesting shooting conditions, my favourite being the rays of light streaming through the wall of clouds as we crossed the Blackfriars bridge. It was here that we asked a passerby to take a group shot–he looked quite pleased to get the chance to use a Fujifilm X-Pro1! 😉 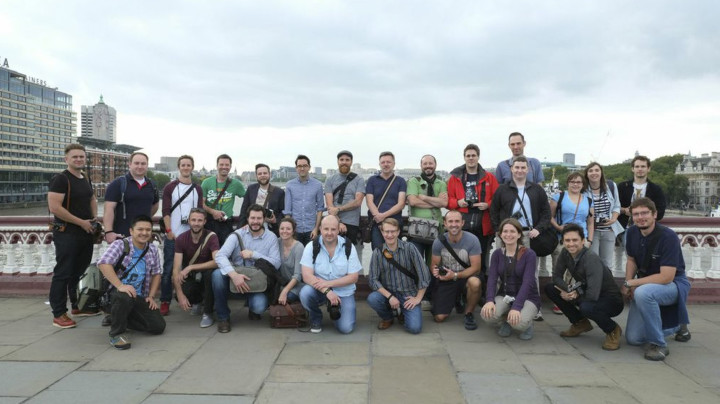 The day came to a close at the Hoxton Grill, where we enjoyed a wonderful meal consisting of smoked salmon, paté, steak, chicken, grilled fish, beetroot and mozzarella salad, and a fine dessert of chocolate brownies and almond cake. It was here that phone numbers and emails were exchanged, and promises were made for future meet-ups in the various countries from which the participants had come. 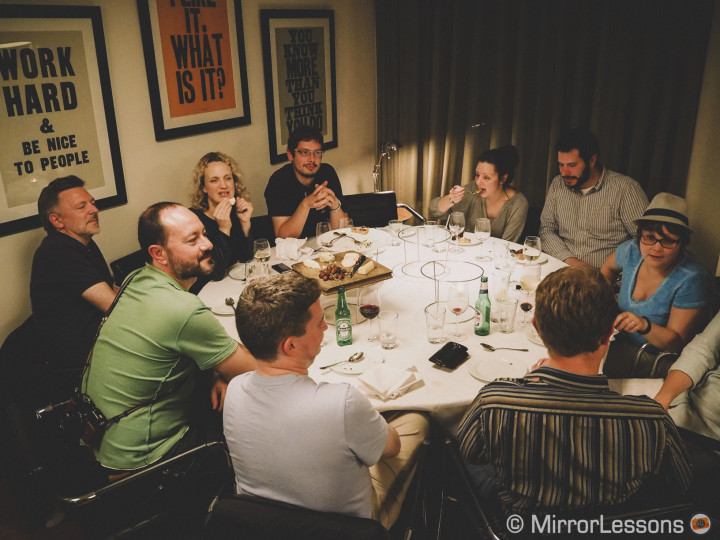 The Netherlands, Germany, Italy, Spain, Ireland, the USA, Canada and the UK–eight nations enjoying one another’s company under one roof in the cosmopolitan city of London, all thanks to relationships being taken from the superficial online realm to the geniune offline world. This is the true definition of social media, and the spirit with which LNDNWLK came into being.

We’d like to extend a very warm thanks to Johnny and Rebecca for organising this walk with us. We’d also like to thank Stephen Bartel Gallery for hosting the first part of the event, and Kodak and Richard Photo Lab for sponsoring the workshop.