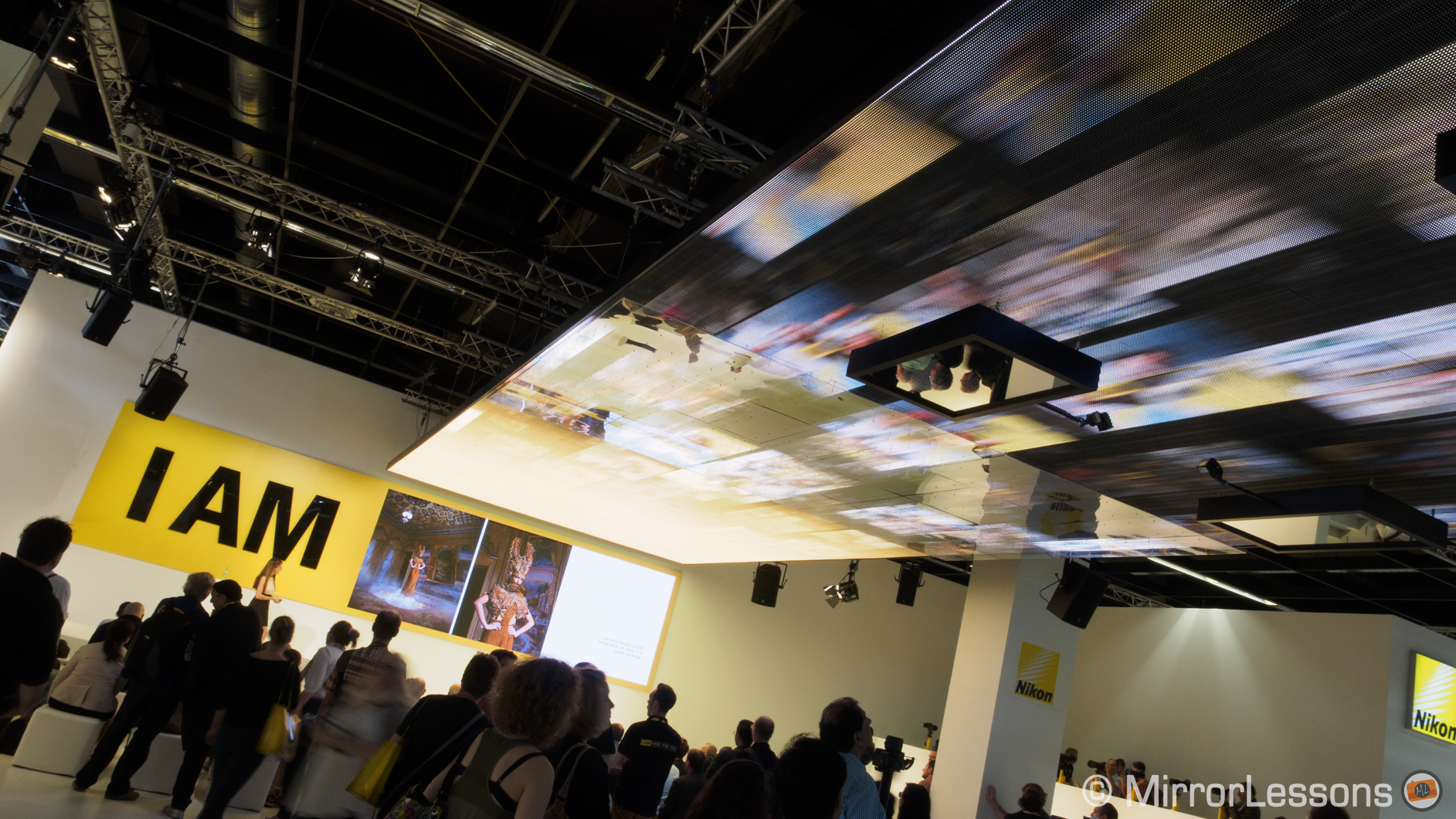 The last interview we held at Photokina was with Dirk Jasper, product manager for professional products at Nikon. Despite having released the Nikon 1 compact system series quite early on in the game, Nikon hasn’t quite embraced the mirrorless concept to the extent other brands have. This being the case, we felt compelled to ask Mr. Jasper a number of questions relating to the series, such as what Nikon’s plans are for the 1 series, how the series has been received so far, and how Nikon feels about the current competition. Below you can find his answers. Enjoy!

Note: Mr. Jasper is the product manager for professional products. His main discipline is not the Nikon 1 series. With him was also present Tom Brett (Brand Manager)

MirrorLessons: Nikon’s main system is still of course the DSLR for both enthusiasts and professionals, but in the last few years, professionals have become increasingly interested in compact system cameras. Do you think that professional photographers will gradually move toward mirrorless cameras, or will DSLRs remain the main choice?

D. Jasper: I think there are several aspects we have to consider at the moment. Regarding professional usage of SLR cameras, we talk about a very high level of capabilities in terms of speed, autofocus and tracking. Mirrorless cameras as they are today also have certain advantages which are beneficial for professional photographers such as frame rate possibilities and video capabilities. In these areas, mirrorless systems can be more advanced than a DSLR. But if we talk about disadvantages, we have the development of electronic viewfinders in terms of resolution, accuracy and time lag. This is still too poor to compete with a DSLR. That is actually one of the main factors because if we take out the mirror, which would give us a lot of advantages in terms of speed and performance, it would mean a serious drawback in terms of tracking what is actually happening in the scene. It would also require rearranging the autofocus system so it can effectively work at the same speed and level it does today. The autofocus would need to become focal plane AF like we have on the Nikon 1 system–it was the first one to introduce it to the industry actually–which is pretty fast, but still not there compared to what a professional camera actually does. That is on one hand a pity, and on the other, it is also still beneficial because not only professionals but also enthusiast photographers already have an ecosystem of lenses and bodies. So, I think we will see times where the technologies merge at some point, and that is actually what Nikon has always done over the years. When a new technology is fit to come to the market and add to the package or value, we introduce it. To make a long sentence short, it might happen but it’s not time yet.

MirrorLessons: What do you think about professional photographers who are actually switching from a DSLR to a mirrorless system? Why do you think they do this?

D. Jasper: Many professional photographers of course have their SLRs in their bag but they also carry a more compact system with them as well. In the past there used to be compact film cameras, then there were compact digital cameras, and now they tend to choose for example something like a Nikon 1 V3 because it actually offers you better performance than a normal compact or hybrid compact. They have interchangeable lenses if you want to change but it’s still compact and small. It’s a compact format. That’s why we also see that there is a huge acceptance of the V3 system in the market as well. Actually, we cannot fulfil the demand, which is great.

MirrorLessons: So, the V3 is doing well?

D. Jasper: Oh yes, it’s doing extremely well in Europe at least. I can’t say for other global regions because I don’t have an overview on that but in Europe we are not currently able to fulfil the demand.

MirrorLessons: Is it possible that we will see another fixed lens premium compact like the Nikon Coolpix A?

MirrorLessons: Do you know where the Nikon 1 has been most successful so far?

D. Jasper: In general, if you look at the whole range of cameras and lenses we have launched over the years, it’s actually a family camera and cameras from the V series have become more and more relevant and successful in the enthusiast sector–that is, people who take photography seriously as a hobby but don’t want to carry around a large DSLR kit. So actually we have the two regions where we intended to be.

MirrorLessons: What does Nikon plan for the Nikon 1 system? Will it keep the system and keep adding new cameras and lenses?

D. Jasper: Yes, for sure. Nikon is always looking into offering a complete solution. Unlike other manufacturers that have launched mirrorless systems, we worked hard not only to offer a mirrorless system but also an equal system of lenses because we are a lens company as well. You have more than a dozen lenses now for the Nikon 1 system. We have high quality primes, we have super zooms, we have long tele-zooms, we have wide-angle zooms and wide-angle primes. To answer, we meet the demands of all variations and topics of photography, and I think that shows our dedication to the system. We did some hard work over the last few years to make it not only a single or two camera system with a standard lens. That’s not an option for our users.

MirrorLessons: What do you think about the competition in the compact system camera sector?

D. Jasper: I think we are in a comfortable position as a system developer because Nikon offers solutions to all kinds of requests. We have compact camera systems, we have super-zoom and bridge systems, we have a mirrorless system with the Nikon 1 and an ecosystem of lenses, and we have DSLRs which is a great heritage and still has a really big number of users. At the end of this year, we’re closing in on 90 million Nikkors since 1959, which is an amazing number of lenses. I think the good thing is that our experience we have from all these fields enables us to make products which are demanded by the market. We are constantly in exchange with our users, not only at shows like this but also many local events doing workshops with users, both professional and enthusiast, and keeping up the discussion with them. Nikon has always been good at taking this feedback and putting it together with our own ideas to make a great product. The Nikon D750 we announced just last week, which is answering so many questions and feedback. We make products that people have been waiting for because they’ve been requesting it from us, not just to replace it with something new and put something fresh on the shelf. That is not what’s happening with Nikon. That’s what makes it fun to work for this company.

MirrorLessons: Was the Nikon DF released to follow the vintage-style trend that we’re seeing on digital cameras these days, or was it already in the plan?

D. Jasper: It was not particularly planned because of the vintage trend. We are a company with a great heritage in imaging, and Nikon allows itself every now and then to release something special to remind people of that. In the early 2000s for example, we made a rangefinder camera, the S3, a special edition which was following the form factor of a camera that was made in the 40s. We did special editions of other famous cameras as well. The DF is a brand exercise to show that we don’t forget where we come from. We have the latest pro technology there, but on the other hand we offer a camera that allows you to use a lens from any year. It works, including metering and everything. The DF was not made to follow a certain fashion trend. It’s a statement rather than that. It’s pure photography. There was a lot of discussion about whether or not we should add a video mode, and in the end I was happy we made the bold decision to keep it as a photographic camera with a pro sensor and pro engine. But I think we showed with cameras like the D4s and D750 that we are also into this hybrid photography aspect. The DF is a special breed.

T. Brett: What do you think of the styling of the DF?

MirrorLessons: I personally really like the design. When it was released it looked like people would either love it or hate it. Some even called it a “steampunk camera” (laughs). We don’t really write about DSLRs but we actually looked into the DF because it was interesting at the time it was released. A lot of people at the beginning criticised it by saying Nikon had just added a shutter speed dial. But other people, when they started to try it, changed their minds.

D. Jasper: As I said, it’s a statement rather than something people asked for. There were complaints at the beginning because people sometimes look too much into numbers rather than what the camera can do.

MirrorLessons: A lot of people are interested in the Nikon 1 system for its autofocus capabilities and speed, but a lot of people didn’t like the fact that there is a 1-inch sensor. Did Nikon choose the 1-inch sensor to maximise the performance, or was it to differential the system from DSLRs and avoid any internal competition?

D. Jasper: The original idea was actually to offer a performing alternative with better image quality than a compact camera. It was not so much to avoid competition within our own line-up. We could have created a system with a larger sensor and good performance, but this creates other problems because the price would increase enormously as well. As I said, we are actually giving all kinds of choices to people from our assortment and that is something other manufacturers cannot do because they do not have a range of solutions as we have. We are looking at where technology goes to, and maybe someday we’ll see a kind of Nikon 1 system with a larger sensor, but for now a compact solution performing at a high speed is more than accepted. And at the moment if we increase the sensor size, we are no longer talking about a compact system because immediately, maybe not the camera body, but the lenses become big and heavy. There are positive aspects and downsides to it. Nikon, as I said, is always striving to deliver the best solution and performance at the best possible price. We would never out rule any possibilities but at the moment we still say that the Nikon 1 is one good solution and DSLRs the other one, and as I said initially, maybe at some time we will see the technologies merge but for the time being it’s too early.

MirrorLessons: Thank you for your time!

Be sure to check out our other interviews from Photokina with the various brands: