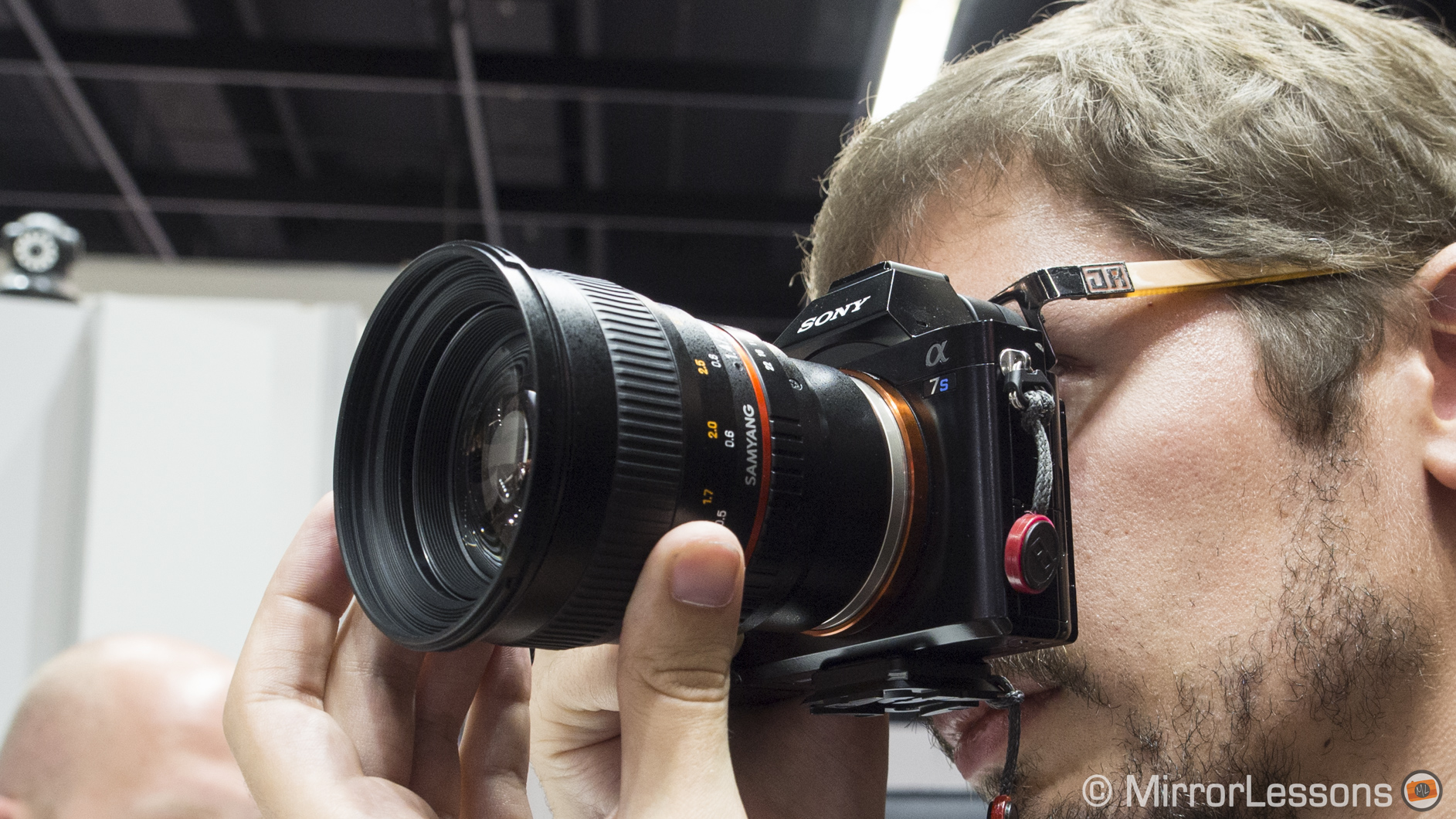 If you’ve been following our Photokina reportage, you’ll know that we were very impressed with the two Zeiss Loxia lenses, but we mustn’t forget about the other interesting manual focus lenses for the Sony full frame system on display as well. Two of these lenses, the Mitakon Speedmaster “Dark Knight” Pro 50mm f/0.95 and Samyang 50mm f/1.4, were recently announced and available to try at Photokina.

The Mitakon Speedmaster generated a lot of interest since the announcement of the first version. Full-frame lenses with such a fast aperture are rare and usually very expensive because of the complex design required to deliver high quality performance. The most well-known example is the Leica Noctilux 50mm f/0.95 whose price currently is around $10,000. The Speedmaster is a much much cheaper alternative. 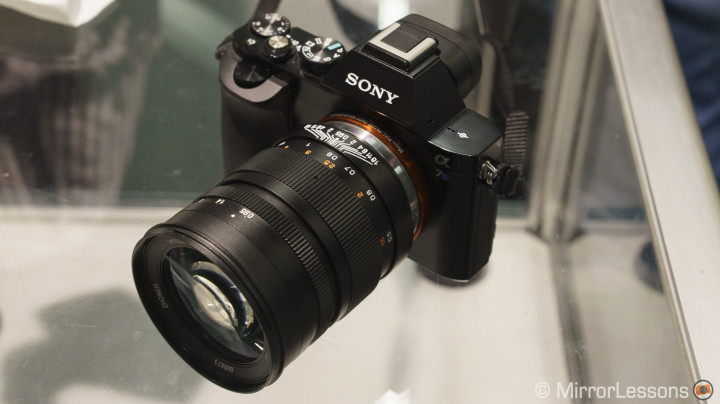 Of course when it comes to third party manual focus lenses, I am always careful not to get too enthusiastic about them because they may not deliver optimal results for the settings we are most interested in, which in this case is obviously the 0.95 aperture. But with the Speedmaster Pro I must say I was impressed with its performance on my A7s.

The Mitakon 50mm delivers good results at f/0.95, which is probably the main reason why you would buy a lens like this in the first place. It isn’t razor sharp at its fastest aperture as we can expect with a lens that costs basically ten times less than the Noctilux but the images are usable and that is something that makes the lens worth considering. Below you can see a few images samples. The focus is not perfect on some of them because it is very difficult to manually focus with such a reduced depth of field.

The Speedmnaster “Dark Knight” PRO is an updated version of the original lens and features a new lens coating that improves image quality. It also has a larger 67mm filter thread compared to the previous 58mm filter thread and a new bayonet hood that prevents unwanted light flare. It features 10 elements in 7 groups with a 4 ED lens and 1 hi-refraction lens. The minimum focusing distance is 50cm. which is another interesting characteristic. 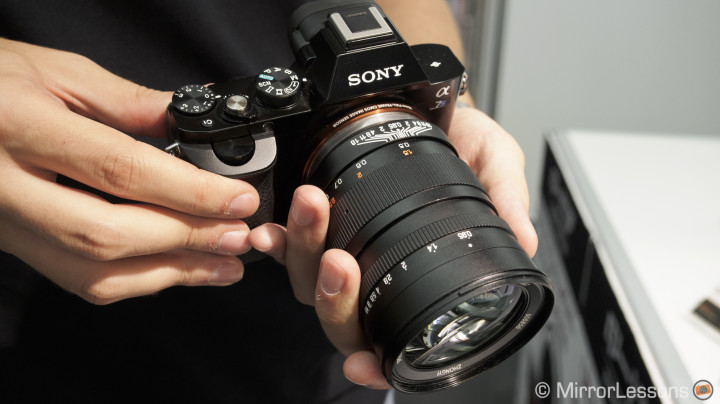 The lens is certainly heavy but has a very good build. The aperture ring is a little bit hard to turn but this can also be a positive thing as you are sure that your aperture won’t change inadvertently. The focus ring is larger and more pleasant to use.

Of course there are many aspects about this lens that need to be tested including the capabilities of preventing chromatic aberration at the fastest apertures but so far I find its results very encouraging. It is a heavy lens and more importantly, its fast aperture makes it suitable for specific kinds of shots where either a very shallow depth of field or good low light performance are a priority. Certainly the lens could be a very interesting companion for the Sony A7s for video usage, also because it has a stop less aperture ring. It also needs to be tested properly with the A7r to see how the lens can cope with a higher resolution sensor like the 36mp Sony sensor.

The Mitakon 50mm f/0.95 Pro edition is available for pre-order on the ZY Optics website. 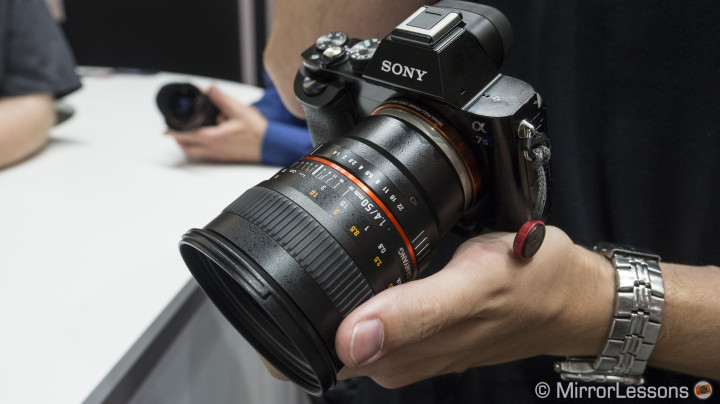 The build construction is very similar to all the other Samyang lenses: it is good and the lens is not too heavy. The focus ring is smooth and is partially covered by rubber for a nice feeling. The lens also has every mark you need concerning distance and hyper focal distance. On a small body like the A7s the lens feels a little bit large and that is because the lens has been designed to work optimally on every digital body and therefore its size is equivalent to DSLR lenses. 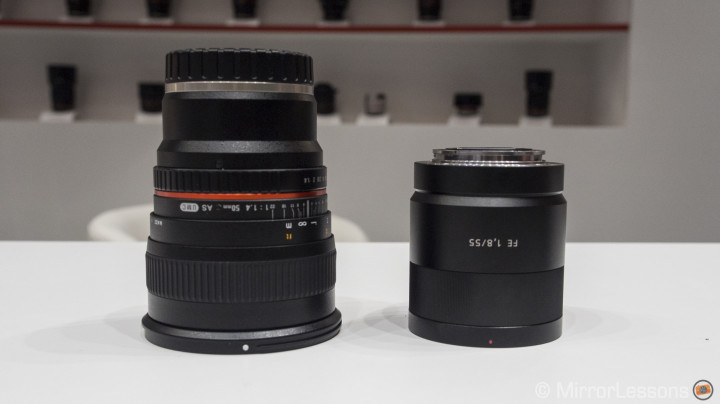 It features 9 elements in 6 groups including a single aspherical element and an hybrid aspherical element. The aperture iris is made of 8 blades for an almost completely circular aperture. It also has a nice 0.45m minimum focusing distance.

The performance of the lens is again very encouraging. Sharp at f/1.4, nice bokeh and lovely out-of-focus rendering.

Personally, I am not the kind of photographer who always wishes to work with the shallowest depth of field possible. I tend to prefer a slower lens that delivers excellent results rather than an extremely fast lens that isn’t always 100% reliable. I also prefer to work with smaller lenses that are well-balanced with the small body of a mirrorless camera. That said, the two lenses mentioned in this article can certainly find a place inside a photographer’s bag. I admit that I am especially intrigued by the Mitakon Speedmaster because an aperture of 0.95 can be very interesting for certain portrait work for example. I hope I will have the chance to test the two lenses in real life conditions and see how well they work with the Sony A7 line.