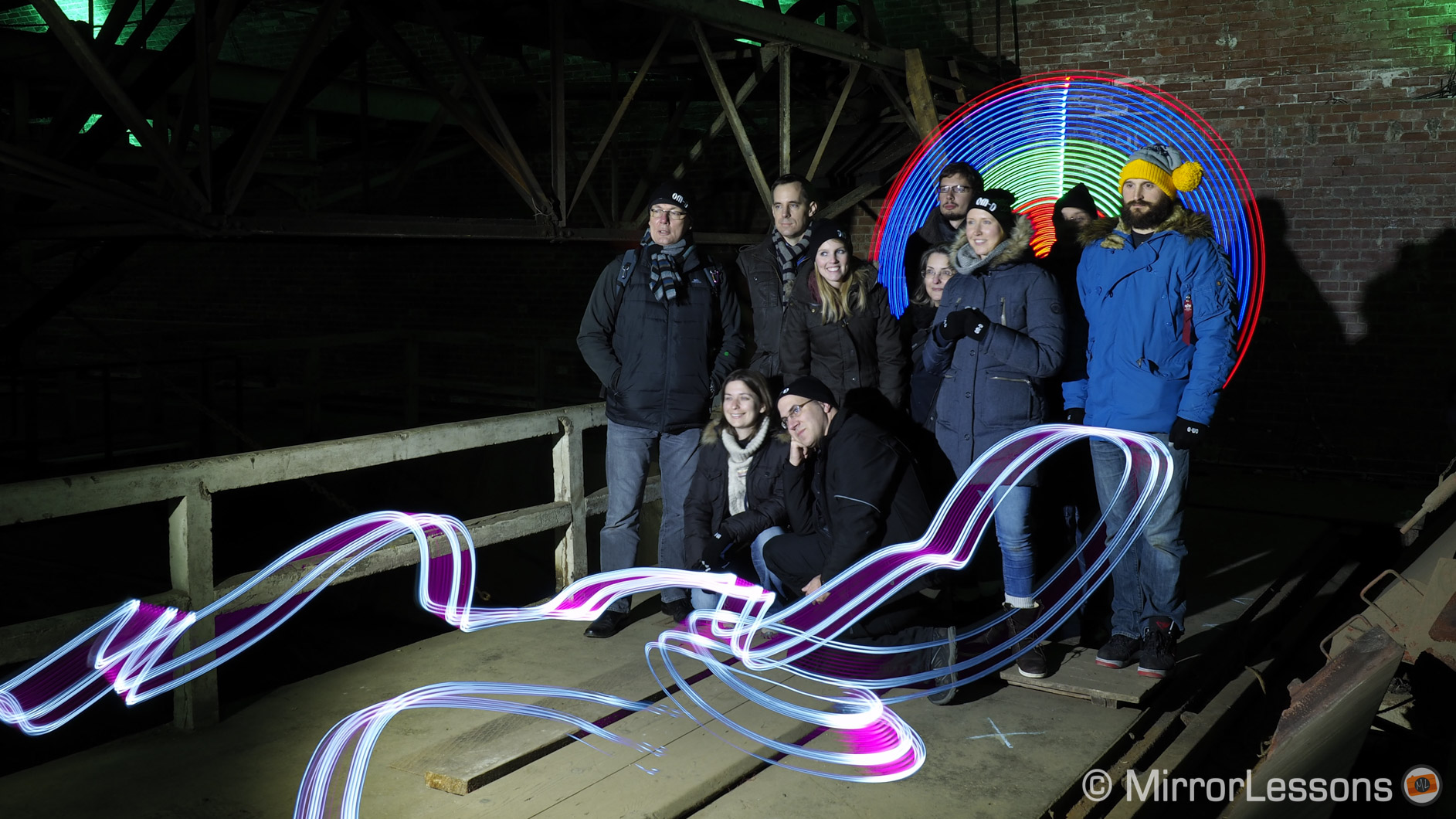 Recently the mirrorless web has been a-buzz with news about Olympus’ latest camera, the Olympus OM-D E-M5 Mark II. To celebrate its announcement, the company decided to hold a 10-day event in Prague called the OM-D Action Factory, to which we along with many other photographers, bloggers and journalists were invited. It was held inside the an abandoned waterworks factory, which has been a set for many famous films including Mission Impossible, Les Miserables and The League of Extraordinary Gentlemen.

The day began with a formal introduction to the new camera, and was followed up by five small workshops where we were able to test each of the E-M5 Mark II’s most important features.

The first workshop featured two models, both of whom posed in very dark factory rooms. Though we had to use faster shutter speeds to photograph the models themselves, the dark ambiance allowed us to test the improved 5-axis stabilisation of the camera on inanimate objects such as the chains, gears and machinery at shutter speeds as slow as 1-1.5 seconds. (And as Mathieu mentioned in his full review, you can even manage 2 seconds if you are extremely steady.)

The second stop was a large chamber where two young light artists called Zolaq “painted” images in the air using various homemade lighting contraptions, from Christmas tree lights to glow sticks to child’s toys. This gave us the chance to test a feature that already exists on the E-M10, E-PL7 and E-M1 called Live Composite. In short, this feature creates several short exposures in a series and stacks them to create a final exposure in-camera. It works extremely well for star trails and light painting because you are simply adding light to the picture without the risk of overexposing the dark areas. My favourite image is without a doubt the one of Mathieu playing the role of a sorcerer. Rather convincing, isn’t he? 🙂

The third stop wasn’t so much a workshop as a demonstration. The Olympus team had placed the E-M5 Mark II under a funnel of dripping water in freezing cold conditions, which highlighted its weatherproof build. Many photographers had fun taking shots of the rather sorry-looking camera, whereas I got a kick out of shooting the photographers!

We then moved on to yet another string of smaller chambers and underground tunnels where we received a crash course about the professional video features of the camera with the help of the Finnish creative collective Kauas. Those curious about video had the chance to film scenes for a short film that would be edited by Kauas and shown at the dinner, while everyone else took backstage shots. Features that were covered include the Clip feature, which allows you to take short movies and compile them in camera with music, and the 5-axis stabilisation for video, which makes action sequences easier and steadier to shoot.

Finally, we visited a small room where a still-life display had been organised to test the High Res Shot feature of the camera. This feature allows you to take 40MP JPGs and 63MP Raw files, despite the sensor being only 16MP in resolution. What the camera does is shift the sensor by a 1/2 pixel and every time it does so, it takes a shot. After doing this eight times, the camera compiles the shots into one final high resolution image.

There was also a scale on display showing the difference in weight between the E-M5 Mark II paired with the 40-150mm PRO lens and its DSLR equivalent–a frank reminder of the main advantage the OM-D system has over other systems to end off the series of workshops.

During the break between the workshops and dinner, Mathieu and I pounced on the opportunity to have some hands-on time with the brand new M.Zuiko 8mm f/1.8 PRO Fisheye lens and M.Zuiko 7-14mm f/2.8 PRO.

The 8mm Fisheye 1.8 was announced on the same day as the OM-D E-M5 Mark II. It is still being developed and we were actually surprised to see a working version already. The lens is surprisingly small considering its fast aperture. It is very similar to the M.Zuiko 75mm f/1.8 in terms of size but feels lighter. It has an all metal build and a focus by wire ring. If my memory doesn’t deceive me, it will be the fastest fisheye lens ever made.

The development of the 7-14mm f/2.8 had already been announced but we were only able see a mock-up version at Photokina last year. Like the other Pro lenses, it also features an all-metal build. The size and weight are very similar to the 12-40mm f/2.8. Like the latter, it also has a Function button, a clutch mechanism focus ring to instantly focus manually and the same minimum focusing distance of 20cm.

Both lenses are dust, splash and freeze proof and will be released later on in 2015 (summertime). Below you can watch a quick hands-on video featuring the two lenses.

The delicious three-course dinner was a lovely way to end off the day. Seated at round tables, we enjoyed getting to know the other attendees and delighted in the final version of the short film we’d shot.

After attending this event and the OM-D E-M1 launch event at Castle Leslie a year and a half ago, we continue to be impressed by Olympus’ ability to generate a fun and educational atmosphere whereby photographers, bloggers and journalists can get to know a new camera in an enjoyable and practical way.

What’s also great is that these opportunities aren’t limited to the press. For example, the company recently opened the Olympus Photography Playground, an interactive museum found in various German cities where you can experiment with the many features of the OM-D and Pen cameras. It isn’t the same as a press launch of course but it is as interactive and hands-on as I’ve seen a camera company get.

So, on that note, we’d like to take the opportunity to thank Olympus for inviting us once again to such an amazing event–we had a wonderful time! 😀