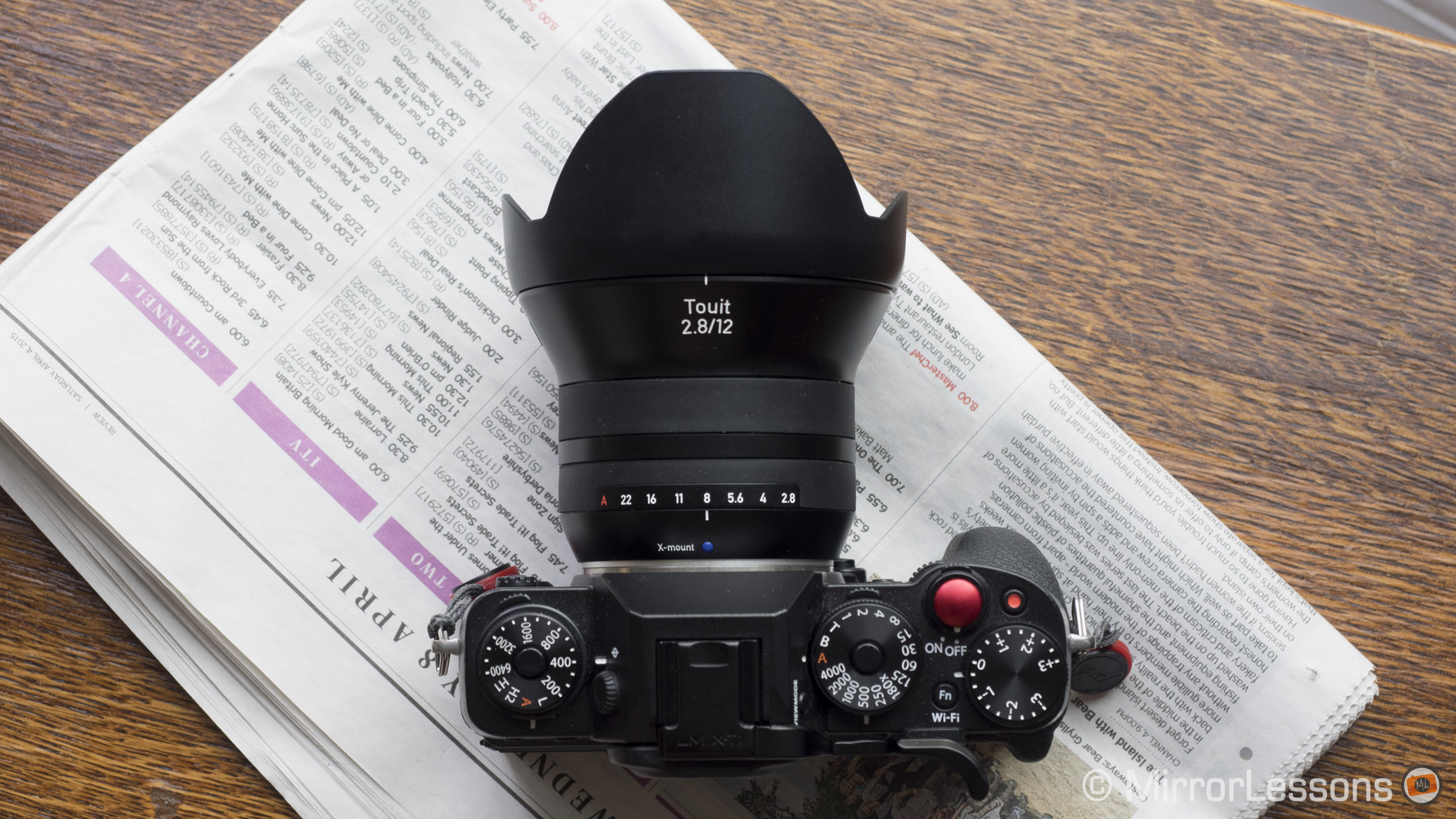 While Mathieu has been testing the Sony A7 II and Leica M 240, I’ve been spending my days in the company of two lenses I’ve long wanted to test, the Zeiss Touit 12mm and 32mm. The pair arrived just in time for the Easter weekend, which was by coincidence also one of the warmest and sunniest weekends we’ve experienced since moving here, so there was much to photograph!

The first part of this review deals strictly with the Touit 12mm f/2.8, an ultra wide-angle lens for the APS-C systems from Fujifilm and Sony.

The Zeiss Touit 12mm (18mm equivalent on full-frame), with its funnel-like shape and large front element, isn’t particularly small compared to many of the primes in the XF range but it remains portable, fairly light and well-balanced on an X body like the X-T1.

It has a nice solid metal body, complete with a plastic lens cap, reversible plastic hood and rubber aperture and focus rings. Zeiss apparently chose rubber over metal because rubber rings aren’t as cold to handle in freezing temperatures. With both a distance and depth of field scale lacking on the body, the markings are scant, featuring only the name of the lens, the full-stop apertures, and the words “Made in Japan.” (Yep, though the lens was designed in Germany, there is about as much German handiwork in this lens as there is in sushi. But don’t worry, most other Zeiss lenses are made there too!)

Now we get to the most annoying feature of this lens: the aperture ring. Not only is it noisy but it moves around so freely that a mere accidental brush against the lens could shift it from f/2.8 to f/22. (I wish I could say this was a complete exaggeration but it’s not.) I was wondering if this problem might be limited to my sample but a quick perusal of a few other reviews convinced me that it is a common issue. If you buy this lens, keep in mind that you’ll have to get into the habit of checking the aperture every time you lift the camera to your eye to shoot.

The focus ring, on the other hand, is wonderfully smooth and precise. Being focus by wire, the focus control isn’t mechanically linked to the moveable lens elements inside the lens but this doesn’t cause any issues. The only real niggle is that both rings are hard to find if your eye is at the viewfinder because the lens barrel and rings feel similar. Had they been designed with a ribbed texture, they would have been easier to find.

If you are looking for a bone to pick with the image quality of the Touit 12mm, you won’t find one. This lens is a quintessential Zeiss through and through.

The results are very sharp throughout the various apertures up until about f/8, and peak between f/4 and f/5.6. Even the fastest aperture of f/2.8 delivers very good sharpness across the frame.

Though not a defining characteristic of this lens (or any wide angle for that matter), the bokeh is fairly nice. It isn’t exactly what I’d call dreamy but that can only be expected from a wide angle. It is a nice addition to a lens with a f/2.8 aperture and fairly close focussing distance of 16.5 cm, as you can isolate subjects and create a visually-appealing composition.

Distortion and vignetting weren’t really an issue despite the ultra wide focal length of this lens. Both are very well-controlled by the camera’s processing engine, which is good news for OOC JPG users. As for the Raw files, the small amount of distortion or vignetting you might notice can easily be manually corrected in Lightroom or any other post-processing software. Sadly there isn’t yet a dedicated lens profile in Lightroom for the Fujifilm version of the Touit 12mm (but there is one for Sony).

Personally speaking, I found the 12mm of the lens marginally too wide for my tastes, but it is very appropriate for architectural and landscape photography. When we used it to photograph a local fair trade shop, for example, I had no trouble including all the most important elements in my shots, even though the shop was very small.

Note: The converging vertical lines have been corrected in Lightroom in two of the images below.

The Zeiss Touit 12mm was, from the start, a curious addition to Fujifilm’s X series line-up. Why? Because, at the time of its release, the XF line-up already had a native 14mm, which cost less, came in a more compact package and was optically superb. And when the XF 10-24mm f/4 came on the scene, the argument to invest in the Touit 12mm became even less convincing.

Unsurprisingly, the strong competition from Fujifilm’s own line-up caused the lens to rapidly depreciate. You can now find it for around $500 less than the original price. While this is bad news for Zeiss, it means that Fujifilm users now have three wonderful wide-angle lenses to choose between and won’t risk breaking the bank.

Would I recommend the Touit 12mm personally? At the current market price, I am far more tempted to say “yes” now than I would have been when it was first released, especially if you are a photographer in need of a prime that is wider than 14mm. However, having been spoilt by the similarly-priced and optically excellent XF 10-24mm (see our review here), it would not be my first choice.

Note: This lens makes more sense for the Sony E-mount system as it lacks a fast ultra-wide prime.

What I don’t like about the Zeiss Touit 12mm