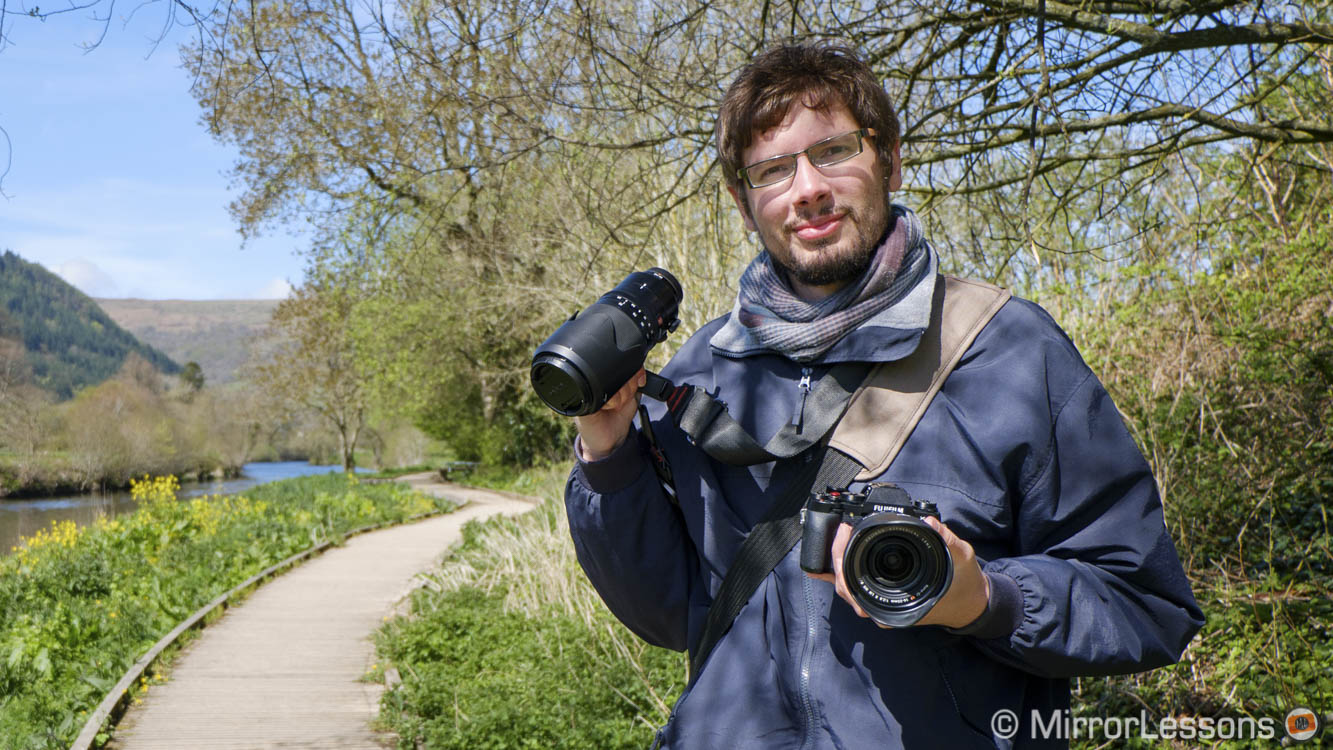 As a working events photographer, there are two zooms that I’ve used more than any ther. They are usually known as the 24-70mm and 70-200mm equivalent on a DSLR/full-frame camera. I believe that this lens combo can be found inside the bags of many professional photographers regardless of whether they shoot sports, weddings or other genres. I had the Nikkor 28-70mm f/2.8 and 80-200mm f/2.8 when I was working with my D700, and then I used the 12-40mm and 35-100mm f/2.8 with my Micro Four Thirds gear.

I also enjoy working with prime lenses. Indeed, for both my Nikon and my M4/3s systems, I used very nice fast primes for a lot of my work. I also know several photographers who prefer primes to zooms. It is a personal choice but when it comes to versatility, you can rarely beat a 2.8 zoom lens. And versatility can often be crucial on the job.

The Fujifilm X system has rapidly become popular amongst professional photographers, especially for the wedding genre. Many of them work with nearly all the fast prime lenses available for the system, from the wider 14mm and 23mm to the standard 35mm and the longer 56mm. I also know some who use the 18-55mm f/2.8-4, which was the X-E1/E2 kit lens and at the time, the fastest zoom available. As such, it was a natural consequence to see the release of two professional zoom lenses with a constant and fast aperture – they make the lens system more complete for professional work. One year since their release, I have no doubt that many X users have integrated at least one of these two zoom lenses into their kit.

I spent two weeks carrying them around with me and attending various events with two questions in mind: How well do they perform? And how much do they contribute to making the X system perfect for work?

This first article focuses on the first of the two Pro zoom lenses: the Fuji 16-55 f2.8.

The 16-55mm f/2.8 is a large lens for sure and the compactness that many users appreciate about the X series seems to have fallen by the wayside. However this is a topic that is applies to many of today’s CSCs. As these companies start to design high performing lenses, it becomes increasingly difficult for them to find the best balance between quality and size. In this case,  quality was most certainly given priority. So yes, it is definitely a large and heavy lens (655g) but its size made me realise just how small the X-T1 is. The lens doesn’t have an internal zoom but it doesn’t extend too much. 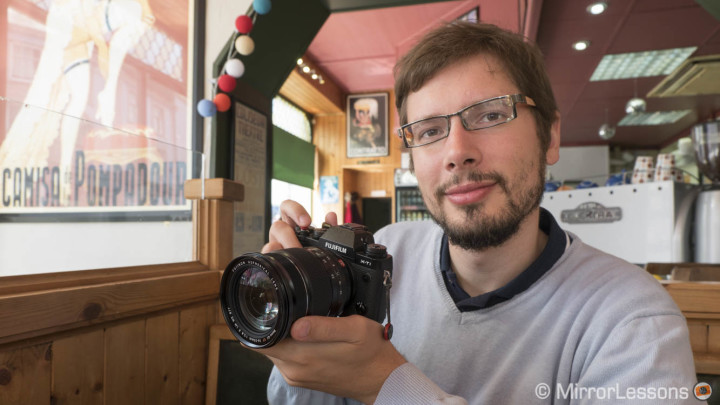 My grip on the X-T1 isn’t perfect with this lens attached. The Lensmate thumb grip on the rear was of great help but an additional grip on the front like the official Fujifilm MHG-XT or the PhotoMadd grip would be a great addition. There is also the battery grip for the X-T1 but I prefer to avoid it if I don’t need the extra power so that my kit remains smaller. Also keep in mind that the lens’ size can make the combination incompatible with some tripod plates, as the lens can interfere. This is another reason an external grip can be of help, as it adds some extra millimetres to the base of the camera. Actually, Fujifilm also has an accessory specifically for that purpose (the MHG-XT small) if you aren’t interested in the additional grip.

The red XF Zoom logo on the side indicates that this is a Pro zoom from Fuji. The lens is very well-constructed out of solid metal and includes weatherproofing: it is splash, dust and freeze resistant down to -10°C. The zoom ring is large and has a rubber cover that makes it pleasant to use. The zoom ring is smooth and precise to operate. The focus ring is made of metal and is of course a “focus by wire” ring but it is nice to use as well. The lens includes an aperture ring with the 1Ev markings but turns in 1/3Ev steps. Unlike other zoom lenses, the aperture ring isn’t too soft to turn so you won’t find your aperture has accidentally changed. You can select the Aperture priority mode by simply turning the ring to the orange “A” marking.

The lens offers the equivalent focal length of 24-84mm which makes it interesting for a wide variety of shots from landscapes to portraits.

From your first moments with the lens, it becomes really clear that Fujifilm has prioritised optical quality over any other characteristic.

The first thing that impressed me was the sharpness. The optimal aperture is 5.6 but I have been surprised more than once by the sharpness at 2.8 or f/4. At the corners there is a slight loss in sharpness but nothing to worry about really. The lens offers the same performance throughout the entire focal range. Minimal diffraction will appear at f/16 and f/22.

I first used the lens for landscape shots. This focal range is excellent both for capturing wide shots and concentrating on only a portion of the scenery. The lens has a natural colour rendering and excellent micro contrast. Carrying it attached to the X-T1 isn’t tiring at all with the right strap.

I also used the 16-55mm a lot in the city for some urban shots and during events such as the Gran Fondo Conwy bike race and the Victorian Extravaganza in Llandudno. The lens has minimal distortion even at 16mm and therefore delivers excellent results in all conditions.

There are many reasons you might end up using this lens a lot at f/2.8. The 16-55mm delivers excellent performance at its fastest aperture: no trace of vignetting and no relevant traces of chromatic aberration. Combined with its close focussing capabilities (30cm to 40cm from 16mm to 55mm) the lens becomes a valid option not only for casual portraits at 55mm but also for capturing a variety of details. The bokeh is pleasant with a nice out-of-focus rendering as long as your focus distance isn’t too far. At 16mm the out-of-focus quality is of course more limited due to the shorter focal length but it can still be interesting in some situations.

The 16-55mm features two types of coatings to reduce flare and reflections: the HT-EBC (High Transmittance Electron Beam Coating) and the Nano-GI (Gradient Index). Translated into the real world, this means that the lens is almost flare free and its performance even when facing direct sunlight is really impressive. The only flares I managed to find were some lateral light stripes especially when using the camera in portrait mode. The lens hood is tends to be less effective at protecting the lens from direct light in this mode as well.

The only trace of chromatic aberration I found was at the slower apertures. In the example below, you can find some small traces of cyan aberration around the castle edges.

Being one of the most recent lenses from Fujifilm, its AF motor is also one of the fastest. It works really well with the Fujifilm X-T1. The lens features two linear motors that are very quiet, which is a plus when shooting in silent environments. Combined with the silent shutter of the X-T1, the people around you won’t hear a thing. The lens performs the best on the X-T1 thanks to its phase detection areas and predictive AF technology. Heather also tried it with the X-A2 (contrast detection AF only) and didn’t encounter any bad behaviour from the lens.

The last topic about this lens is the most controversial: stabilisation. Though at first Fujifilm showed the 16-55mm with OIS on the roadmap when the lens was officially announced, OIS wasn’t one of the specs. There has been lots of talk about this.

The question is: did I miss optical stabilisation while working with this lens?

I would say “yes” but only in certain situations, mostly because I am used to OIS lenses and IBIS bodies. But at the same time, I did manage to get sharp shots at slow shutter speeds and I could probably live with it if I had to use the lens for work.

From a technological point of view, I’ll admit that the absence of stabilisation is a shame, as Fujifilm has proved with the 18-135mm and 50-140mm that it is possible. For photographers who often work in low light, a 2.8 stabilised lens on an APS-C sensor is certainly a welcome feature. On the other hand, I understand that ditching OIS was a way of keeping the size and cost of the lens down. It also allowed them to prioritise optical quality which, in this case, is excellent.

At the same time, it shows that some mirrorless brands do have to make compromises to produce gear that can meet the highest standards, something I’ve already noted in previous reviews about lenses for other systems. For this reason, I’m inclined to feel that sensor stabilisation may be the best solution for CSCs.

The Fujifilm 16-55mm f/2.8 surprised me. I had already read that it was very good but I didn’t expect it to be that good. The optical quality is absolutely fantastic and the lens proves very versatile thanks to its fast aperture, nice bokeh and portrait capabilities. The autofocus is really fast and silent, the build is excellent and it features weather sealing.

I tried to find some flaws or issues but the only two aspects we can talk about are up for debate. The lens is not small and while I am sure than many professional photographers won’t mind, it is certainly something to consider if portability and compactness are your main concerns. Then there is the lack of optical stabilisation. While I’ve shown that sharp shots are possible with slow shutter speeds if you manage to be stable enough, it is certainly a limitation for a continual use in low-light.

What are your thoughts about the Fuji 16-55 f2.8? Is is a lens you would consider for your kit?