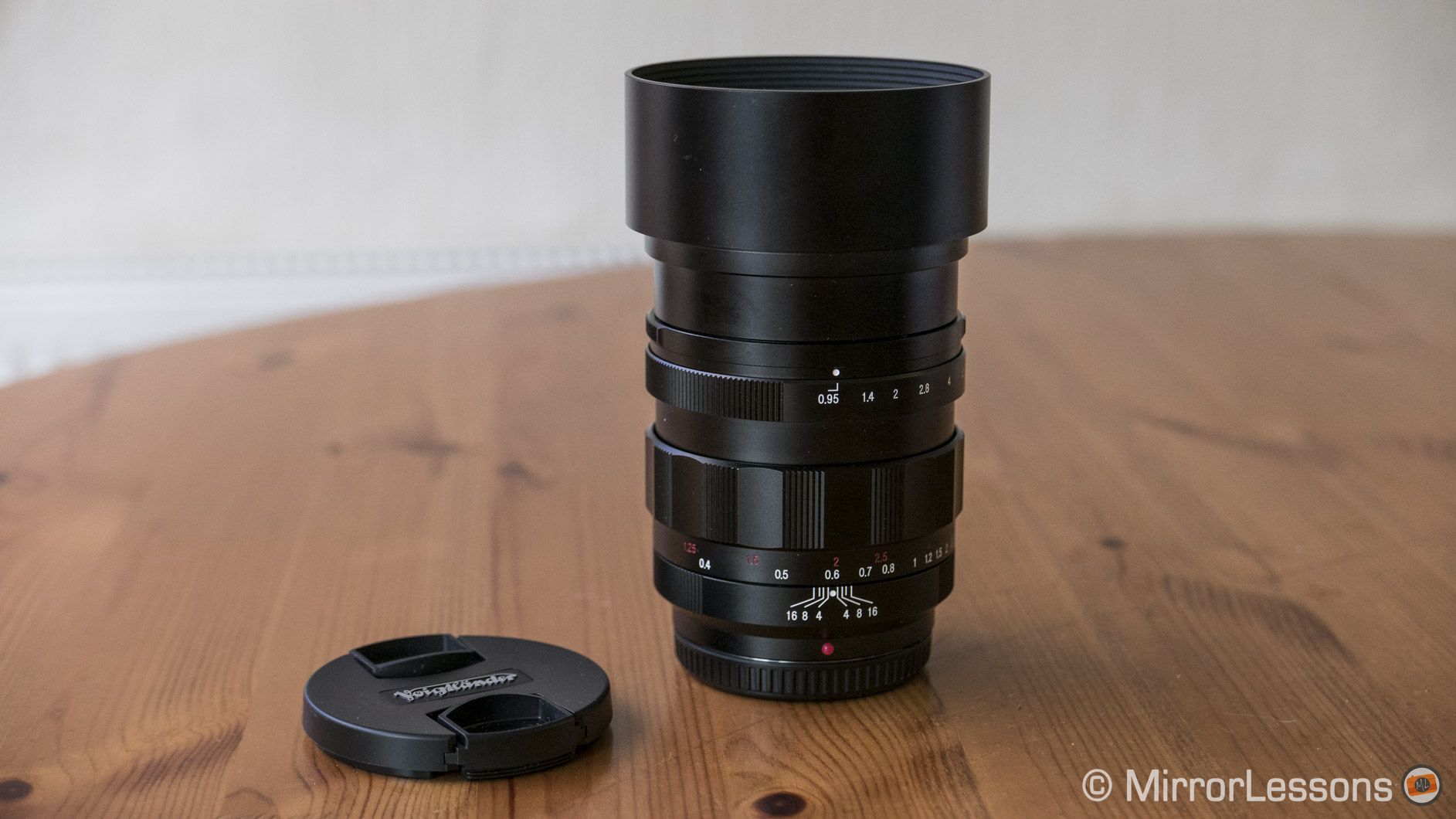 A few months ago, I wrote an article about my favourite lenses for the Micro Four Thirds system. Out of the five listed, two were portrait lenses – the “cheap and cheerful” M.Zuiko 45mm f/1.8, which we currently own, and the Nocticron 42.5mm f/1.2, the so-called “bokeh beast” from Panasonic Lumix.

Both lenses are tack sharp at their fastest aperture, so when we received the Voigtlander 42.5mm f/0.95 for testing, I was eager to see whether what the incredibly fast 0.95 aperture would give me something that these two lenses could not.

On paper, it is the perfect recipe for a portrait lens. But how does it perform in a real world situation? Let’s find out!

The Voigtlander 42.5mm f/0.95 is one in a series of four manual focus 0.95 aperture lenses from Voigtlander, three of which have already been released and one which is expected to arrive later on this year. The focal length is ideal for shooting anything from full-length portraits to head-shots.

The lens elements consist of one Super High Refractive element and one aspherical element, which are designed to produce clear and sharp images and reduce chromatic aberrations. The ten aperture blades form a nearly circular diaphragm which, in turn, produce a smooth and attractive bokeh.

On the body, you’ll find an intelligent de-clicking aperture ring, which is activated via a bezel. This makes the lens appropriate for both stills and video use. There is also a large manual focus ring and well-marked depth of field scale.

Like the other Voigtlander lenses in the series, it has a solid all-metal build and is fairly heavy for a Micro Four Thirds lens. (If it didn’t cost just under $1000, it would make an excellent weapon of war!) It is however a good fit for the larger Micro Four Thirds bodies like the E-M1 or GH4.

It comes with a reversible all-metal lens good that screws onto the lens. The lens isn’t useable with the hood reversed because it covers the aperture ring.

I should begin this section by saying that to design a lens that is already sharp at 0.95 is no small feat. So far, the most famous lens is the Leica Noctilux M 50mm and it costs nearly $10,000. By comparison, the 42.5mm costs a “mere” $999, so it is unreasonable to expect the same sort of quality. That said, I was far from disappointed…

Most of my time with this lens was spent doing street portraiture during the Llandudno Victorian Extravaganza, an annual event where people dress up in traditional Victorian costumes and hold a parade in the centre of the town. My curiosity about the 0.95 aperture incited me to shoot most of my portraits at this value. As you might expect, the results are far from pin sharp, show a loss in contrast, and display some vignetting and very small amounts of chromatic aberration but they have a vintage, almost cinematic look that I really enjoy.

The bokeh is indeed as beautiful and creamy as the specifications suggests it should be, and above all, there is great flexibility for subject isolation. Never in my time using MFT have I felt as if I were shooting with a full-frame system as much as I did with this lens.

There is also the advantage of being able to shoot in very low light conditions. Those who own MFT cameras know that the high ISO performance tends to peter out beyond 3200, so a fast aperture can help you keep your ISO values as low as possible.

Due to its impressive minimum focussing distance of 9.1” (23cm), it is possible to use the 42.5mm as a semi-macro lens. I’ve used it to shoot flowers, ornaments, shells and more and the results have been excellent, especially between f/4 and f/8.

The only downside is that the faster apertures (between f/0.95 and f/2) aren’t particularly useful for close shooting. The results lack the sharpness necessary for most macro and still-life shots. I find this lack much more noticeable for close-ups than for portraits or scenes where the subject is further away from the lens.

Being so used to having autofocus on the portrait lenses I use, it was at first a challenge to get the focus right. (I cringe to think about how many shots I missed in that first hour!) However it didn’t take long for me to get the hang of it and actually enjoy the experience. The lens forced me to slow down, choose my subjects with care and think about my composition.

The lens too has a few physical characteristics that help speed up the manual focussing process. 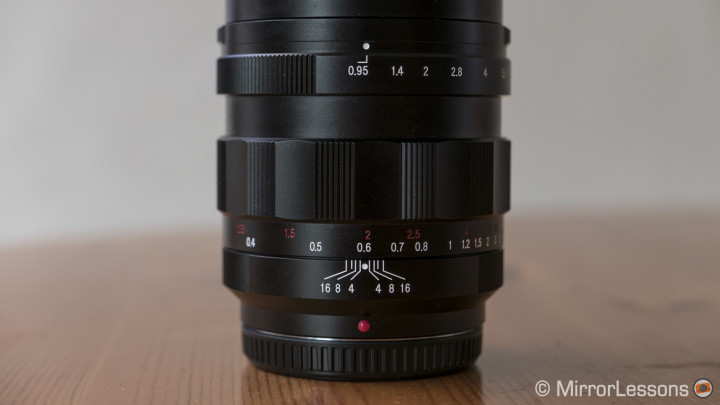 First of all, it comes with a beautifully constructed aperture ring with all the essential values marked on the barrel and a bezel that activates or disengages click stops. When the click stops are engaged, it is very easy to tell when you are switching between values for still shooting. Likewise, when you shoot video, the aperture ring’s de-click function makes it easy to achieve a smooth transition from one f-stop to another.

Second, it has a handy depth of field scale, meaning that for street photography, you can simply set a higher aperture and zone focus. I didn’t do much of this with the 42.5mm because the depth of field scale is a little small, but I had some success with its sister, the 17.5mm.

Finally, the focus ring is very smooth, large and exceptionally precise. It is very easy to make minor adjustments to your focus area, thanks in no small part to the E-M1’s manual assist functions (namely focus peaking and magnification).

For those who love manual shooting, this lens is truly a godsend.

The Good and the Bad

As you stop down to f/2.8, there is a great improvement in contrast and centre sharpness.

When you hit f/5.6, it becomes just as sharp in the centre as the best offerings from Olympus and Panasonic. Corner sharpness lags behind however, becoming reasonably sharp at f/8 but never as sharp as the centre.

You will see a small amount of chromatic aberration at all apertures, though it gets much better after f/2.8. Vignetting is less present, disappearing almost completely after f/2.8. Both can be easily removed in Lightroom or a similar post-processing software.

Having the lens hood definitely helps to keep flare to a minimum but it becomes more noticeable the more you close the aperture. You can eliminate most flare simply by not shooting directly into the sun.

Since the resolution of the 17.5mm f/0.95 had proved somewhat underwhelming, I was expecting similar results from the 42.5mm. It turns out that the resolution is actually very good on this lens, which is a relief as nobody wants a pixelated portrait! 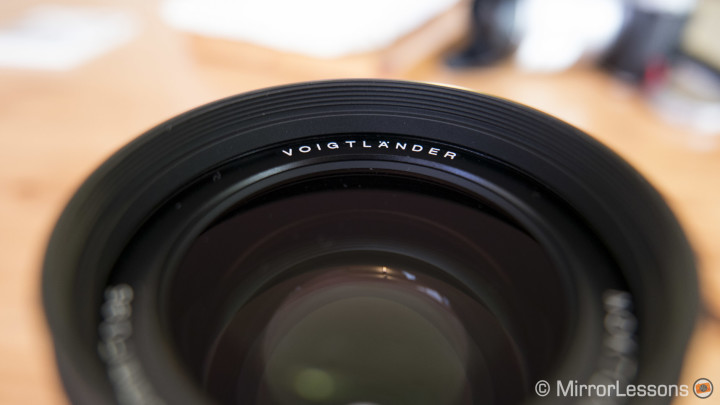 Were I asked to choose one Micro Four Thirds portrait lens for my personal collection, the decision would not be easy.

On one hand, I loved the purely mechanical build of the Voigtlander 42.5mm f/0.95 and the accuracy of the manual focus ring. The 0.95 aperture makes subject isolation a breeze and the bokeh is as creamy as custard. On the other, I’d be reluctant to give up autofocus completely. And with offerings like the M.Zuiko 45mm f/1.8 and Nocticron 42.5mm f/1.2 on the market, it is possible to have a very fast aperture, beautiful bokeh and that razor-like sharpness that is so desirable from a portrait lens.

Is f/0.95 necessary? Probably not, but there’s no question that it gives your images a dreamy and cinematic “look” that no amount of post-processing can recreate.

A special thanks to Flaghead Photographic Limited (official importer in the UK) for loaning the sample to us.

What are your thoughts about the Voigtlander 42.5mm? Is it the kind of lens that would interest you?