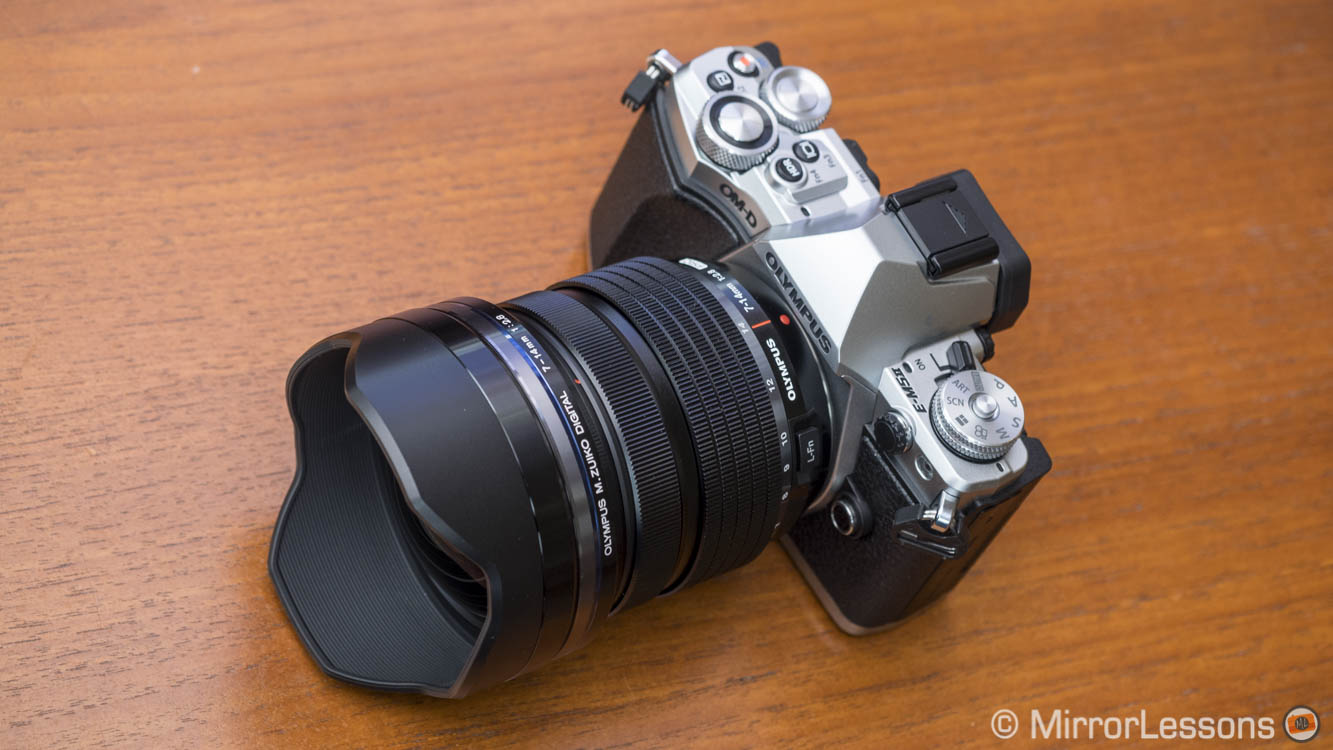 The M.Zuiko 7-14mm f/2.8 is the third professional zoom designed by Olympus. It is also the second super-wide angle zoom lens for the Micro Four Thirds system but has a constant aperture of f/2.8 instead of f/4, as found on the Panasonic 7-14mm. It goes without saying that many users were interested in the idea of a faster wide angle zoom lens that could provide more versatility than the Panasonic version.

I had the chance to see and try out a prototype of the new lens during the E-M5 Mark II launch in Prague a few months ago, but I wasn’t allowed to bring the pictures home. Despite playing with it for only a few minutes in the tiny corridors and spaces of the abandoned factory, what I saw looked promising.

The 7-14mm f/2.8 gives you an equivalent zoom range of 14-28mm on the full-frame format, which is the classic ultra-wide angle zoom lens you can find for many systems. It is a lens whose optical quality managed to surprise me more than once. It is not perfect but it is at the highest standard that Micro Four Thirds lenses can deliver in terms of image quality. It is also a very versatile lens despite its wide nature.

After shooting with this lens for over three weeks, I can safely say right away that the 7-14mm f/2.8 is another great addition to the m4/3 system.

The 7-14mm has the same build quality as the other Pro series lenses. You get an all-metal build on the surface except for the non-removable hood which is made of plastic. The lens is splash, dust and freeze proof down to -10°C. The provided lens cap attaches on the external side of the built-in hood. It is similar in size to the M.Zuiko 12-40mm Pro but is slightly larger in diameter.

On the OM-D E-M1 you can achieve a good balance thanks to the integrated front grip of the camera. On the E-M5/E-M10 series it can be slightly more uncomfortable to use. I shot mainly with the E-M5 mark II during these past three weeks and I got used to it in the end but an optional landscape grip could be a good investment if it becomes your go-to lens.

The zoom ring feels nice and is precise to use. The focus ring is of course a “focus by wire” type. It can be clutched to reveal the distance scale and instantly switch from auto to manual focus. There is also an Fn-L button on the side to which you can assign a custom function via the camera’s menu. I usually use it to lock the focus point as I find its position really comfortable.

The zoom mechanism is internal so the lens doesn’t physically extend. You can notice however the front element moving forward when set to the shorter focal lengths. While it stays underneath the plastic hood, at 7mm the front element is very much exposed, so when not shooting I advise you to set it back to 14mm to protect it. 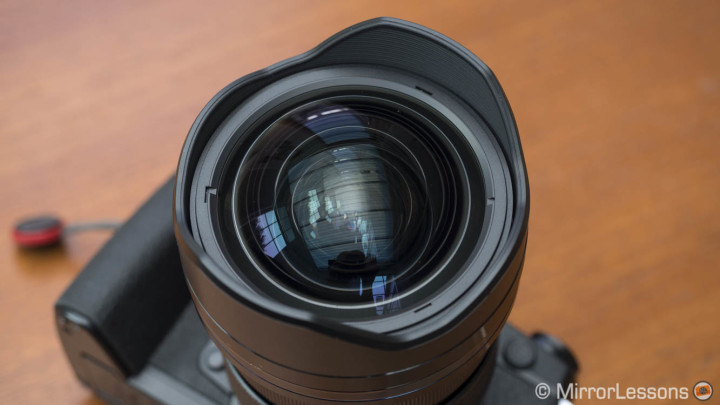 There isn’t the option to attach a circular filter thread. Olympus won’t produce an optional filter holder so we will have to wait for a third party manufacturer to do it. LEE recently announced a filter holder designed especially for Super Wide angle lenses. For now only DSLR lenses are compatible but they should increase the list soon. Let’s hope that the 7-14mm f/2.8 will also be included.

Through the lens: sharpness and distortion

The lens is really sharp and is up to the standard that Olympus has already shown us with the M.Zuiko 12-40mm f/2.8. At the centre, I didn’t notice any decrease in sharpness throughout the entire zoom range and from f/2.8 up to f/5.6. If we start to pixel peep a little more, we can notice that at f/8 there is a slight loss in sharpness especially at the longer focal lengths. From f/16 up to f/22 there is some diffraction too, which is nothing out of the ordinary for a Micro Four Thirds lens.

At the edges, the performance remains excellent – you really need to analyse the extreme edges and corners to find something worth mentioning. There is a lack of sharpness at f/2.8 that is almost entirely corrected from f/4. It is more present at 7mm while it is partially reduced at the longer focal lengths.

The lens is also capable of delivering excellent results with the 40/64mp High Res Shot function found on the OM-D E-M5 mark II. You can see an example below.

It was by taking architectural shots that I could really evaluate the performance of the M.Zuiko 7-14mm.

When using the shortest focal lengths like 7mm and 8mm, the amount of perspective distortion will of course be more pronounced depending on the composition and your distance from the geometrical lines. For example if you keep the sensor and the lens as parallel as possible to the vertical and horizontal lines in the scene you are are photographing, distortion is almost absent even in the case of vertical lines that are on the left or right edges of the frame.

When vertical and horizontal lines aren’t parallel to the sensor the distortion will be more pronounced. Of course in some situations you can’t be at the right distance or height to take the photograph. A classic example is when you photograph a building from the street and have to tilt up in order to include the entire building in the frame. Of course the more you zoom in or use longer focal lengths, the more the perspective distortion will be reduced.

Overall I found the 7-14mm f/2.8 excellent even when photographing in tight spaces and indoor locations where the lack of space can accentuate distortion. It is definitely a valid lens to consider for architectural photography.

The lens is of course a great option for landscapes. It has a natural colour rendition and excellent micro contrast. You get the same type of rendition as the other Pro lenses: good sharpness, good contrast and vibrant colours.

When photographing people, you can get lots of distortion at 7mm especially if your subjects are not in the centre and are close to the lens. But at the right distance and with the right focal length, it can work well for group shots too.

Through the lens: close focusing and flare

Another interesting characteristic of this lens is the minimum focus distance of 7.5cm (measured from the sensor) that remains constant throughout the entire zoom range and gives you excellent macro capabilities. Of course we aren’t anywhere near a 1:1 ratio but the lens can focus close enough to capture interesting details or to create original compositions. The sharpness remains fine at close distances even at f/2.8.

The bokeh is very pleasant which is is quite surprising considering that this is a wide-angle lens.

Even at 7mm the results are quite stunning like in the example below.

When zoomed in at 14mm, it becomes even better and you can really see how versatile this lens is. It is a characteristic that Olympus has implemented on all its Pro lenses. They all have very close focusing capabilities that remain constant throughout the entire zoom range. It is one of my favourite characteristics for sure.

I didn’t find any relevant traces of chromatic aberration, apart from at the shortest focusing distances when using the fastest aperture. Vignetting is almost completely absent. The only real limit to be aware of is flare. Most of the time they are small but very much present when using the lens at 7mm. The reason is that at this focal length, the front element is very much exposed and the hood doesn’t protect it that much. Even when the sun or other strong sources of lights aren’t in the frame, you can end up with flares quite easily even when the light is coming from the left or the right like in the example below. I was concentrating on the bridge in my composition and the sun was on the left. I didn’t notice the flares in the middle until I saw the image on the computer.

The easiest thing to do is always check for flares using the electronic viewfinder if your M4/3 cameras has one or to play back your picture and zoom in on your LCD screen after taking the shot. To get rid of these flares, I often used my left hand by positioning it above or to the side of the lens until I saw that the flare had gone. It is a very rudimental solution but works most of the time. You have to pay attention of course that your hand doesn’t enter the composition!

Below you can see more examples with flares. Most of the time, flares disappear at around 11mm because the lens is more protected by the hood. The second picture below shows the worst flare I got with this lens but it happened only once and the sun was clearly in my frame.

I used the lens mainly on the E-M5 mark II and occasionally on the OM-D E-M1. The autofocus was really fast on both cameras. I didn’t come across any problems except for when I reached the limit of the minimum focus distance. The autofocus is as quick and as accurate as with the 12-40mm. I almost never needed to switch to manual focus. This makes this lens excellent for many applications including weddings and events where such a wide angle and fast aperture can be of great use.

The autofocus is fast and silent when shooting video as far as the lens is concern. However in AF-C, the E-M5 mark II may hesitate a little more, just as it does with the 12-40mm.

Talking about video, the lens can also be an interesting option for filmmakers who use Black Magic Cinema cameras. Often these products have a Micro Four Thirds mount but a smaller sensor that gives approximately a x3 crop factor. So it is difficult to find a good wide-angle lens to use on the Cinema or Pocket Camera. The M.Zuiko 7-14mm would become approximately a 21-36mm, which could be an excellent solution also because of the f/2.8 aperture and close focusing distance.

Below you watch a few video shots taken with the E-M5 mark II starting at 4.45 min.

I really like super wide-angle lenses. You can play a lot with perspective and geometry to create an interesting composition. They are the perfect companion for landscapes, architecture and astrophotography when you have a fast aperture like this Olympus lens. I admit that most of the time I was more inspired to shoot at 7mm more than any other focal length and I think this very wide value is one of the main reasons to consider it.

Olympus is building a nice series of professional lenses and the M.Zuiko 7-14mm f/2.8 is proof once again of their top optical quality. You get excellent sharpness, very well controlled distortion and some close focusing capabilities that make it a surprisingly good lens for close-ups and details. I don’t think we can really ask for more than that.

Of course not everything is perfect. Lens flares are small but very much present at the shortest focal lengths. There is a lack of sharpness at the corners at 2.8 which isn’t surprising concerning the nature of the lens but it is worth mentioning. Also, it is on the heavy side for a Micro Four Thirds lens.