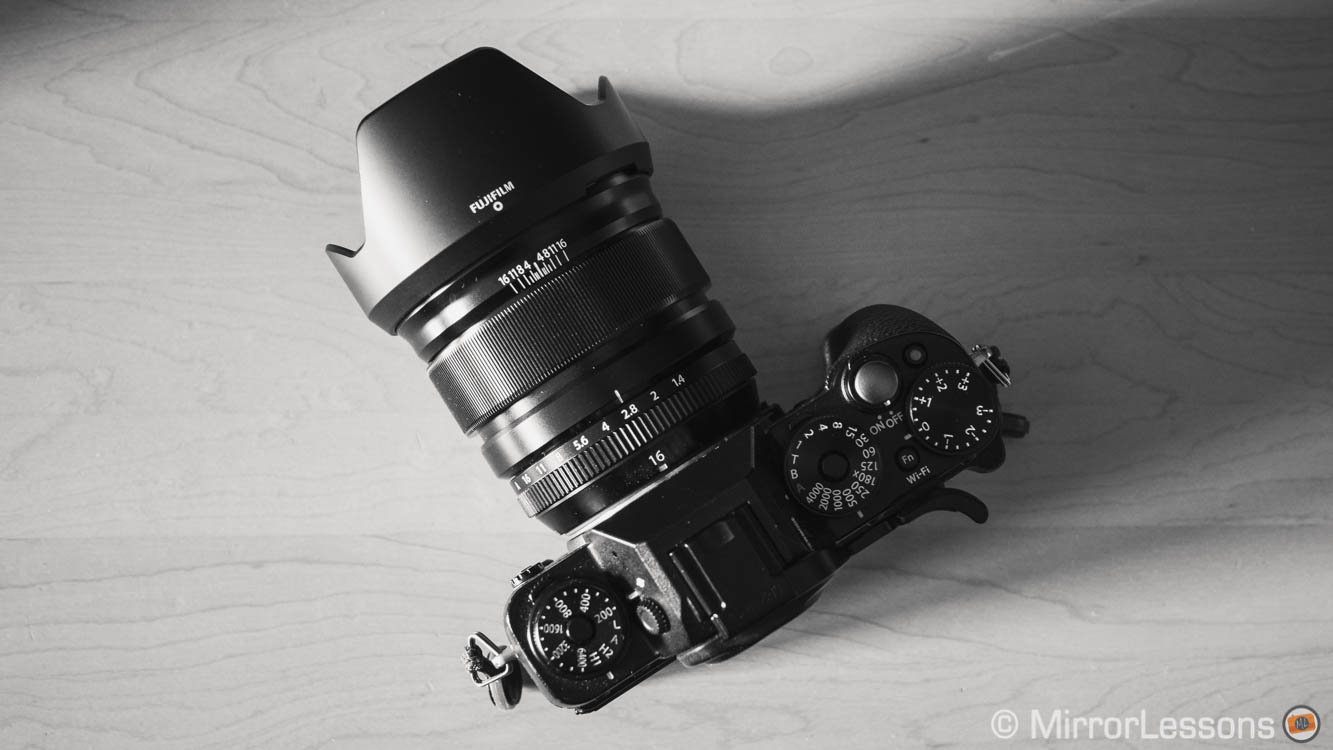 When I traveled to Canada three years ago, I shot 80% of my photos with the Nikon D700 and the Nikkor 24mm f/1.4, one of the best lenses I’ve ever owned. It is as such a funny coincidence that I had the chance to try the equivalent focal length from Fujifilm when I visited North America again this year.

During our time in Toronto, Fujifilm Canada lent us the new X-T10 (check out our review here) and the new 16mm prime lens for a few days. I used the lens on the X-T10 and Heather tried it on the X-T1 as we explored the streets of this great Canadian city. This focal length is not an easy one to use in my opinion. It offers a standard wide angle view that can work well in many situations but there are many occasions when it isn’t wide or close enough. It takes time to get used to it.

What about the lens itself? Well, I admit that writing about the quality of Fujifilm XF lenses is becoming kind of redundant because this is yet another excellent prime lens.

The build quality is on the same level as other Fujifilm prime lenses. The 16mm has an all-metal build, and is splash, dust and freeze proof down to -10°C. It is light and comfortable to use not only on the X-T1 but also the smaller X-T10. Its size is reasonable considering the fast aperture – in fact, it doesn’t differ all that much from the 18-55mm f/2.8-4 kit lens except that it is slightly thicker. It is also slightly longer than the XF 23mm f/1.4.

The focus ring can be clutched to instantly switch to manual focus like the XF 23mm f/1.4. The focus ring is “focus by wire” but smooth and comfortable to use. There is a distance scale marked but I honestly find it too small to be useful. It is fine when you set the hyperfocal to f/16 or f/11 but after that, the white lines are bunched too closely together. The lens also includes an aperture ring with 1Ev markings but turns in 1/3 steps. If you set it to A, aperture will be chosen automatically by the camera.

The lens comes with a petal shaped plastic hood. Its size isn’t too invasive like on the 23mm lens. An alternative rectangular shaped metal hood (LH-X16) will be available separately in September.

There are two main reasons I would buy such a wide prime lens with a fast aperture: low-light shooting and tight spaces. It is crucial that the lens be sharp enough at f/1.4 or f/2 to be useful for indoor and night shooting where tripods or other accessories aren’t an option. It allows us to lower our ISO values and therefore have a cleaner image. Also, the amount of distortion needs to be as low as possible (within the limits of a wide angle of course) so that it can be used with people in the frame as well. The best concrete example I can show you is the Retriever’s concert at the Horseshoe Tavern in Toronto. The stage was relatively small and I was just in front of it, so the 16mm focal length allowed me to capture wide scenes with different members in the shot.

It wasn’t wide enough to capture the entire stage except for a few times where the band members were in a favourable position. Most of the time, I would been better off with a shorter focal length like the 14mm. But when I went behind the crowd, I could easily capture the four members playing on stage. As long as you can move into different positions, it is an excellent lens for events and can be very versatile.

The lens is already sharp at f/1.4 and gets even better at f/2. However during that particular shoot, I didn’t get 100% perfect results. The X-T10 autofocus wasn’t always accurate, but this wasn’t always the camera’s fault, as the singer was constantly moving about , the light was poor, and the depth of field was shallow. Despite this lens being a wide angle designed for an APS-C sensor, the shallow depth of field is enough to ruin the image if the focus is not precise. In the example below, shot at f/1.4, the focus is on the guitarist’s hand instead of his face. The depth of field isn’t shallow enough to have our eye concentrate on the hand alone, and at the same time, isn’t deep enough to bring the face into focus.

So how sharp is the lens at f/1.4? Well, let me show you a more relevant example shot inside a coffee shop in daylight with Heather as my test subject. This gives you a good idea of the shallow depth of field you can achieve with this lens when shooting ambient portraits such as the one below.

As you can see, the subject separation from the background is not bad and the bokeh includes nice rounded specular highlights. However I find it a little bit nervous and not shallow enough to really make the subject pop out. So, can this lens find a place in your bag for a portrait shoot? Well, I think that if you intend to take advantage of its short focal length to create an interesting ambient portrait where subject, light and background mix well together, I’m sure it can deliver excellent results. Damien Lovegrove put it to very good use for a series of fashion pictures, for instance. But don’t expect miracles in terms of bokeh or shallow depth of field for this kind of application. Below you can see a few more examples of ambient portraits. It is also important to remember that this is a wide angle lens and if your subject is too close, distortion on the face will be more noticeable. The second picture below is a good example of this.

If you focus closer, things gets more interesting as far as bokeh and the out of focus area are concerned. The lens has a minimum focusing distance of 15cm and becomes interesting for capturing details while giving a good view of the background. This also proves that with the right focus distance, the bokeh capabilities of this lens are actually really good. However wide open I found that sharpness decreases a little. The performance increases from f/2.

The 16mm can also be an interesting lens for reportage and street photography. The focal length will encourage you to get closer to your subjects and be more involved in the scene just in front of you. For this genre, the choice of focal length is very important. Many photographers prefer the 28mm equivalent or 35mm equivalent but I found the 24mm equivalent very interesting as well.

What about architecture? Well, in a city such as Toronto with high buildings and skyscrapers, the focal length isn’t short enough to capture everything but if you manage to effectively select the elements and your composition, you can get interesting results. The distortion is well contained and I didn’t find any unwanted results such as barrel distortion. There is of course some perspective distortion at the borders but nothing really annoying.

The lens is really sharp at the center from f/1.4 and f/5.6 seems to be its sweet spot. At the corners however I found the performance to be optimal only from f/2.8 which isn’t really a big issue. At f/16 some slight diffraction is present. Below you can see a quick sharpness comparison that focuses on the bottom left corner.

Flare? Yes, I found a few in different shots as you can see below but only in certain situations where the sun’s rays were really strong and at a certain angle. Overall the lens has a strong flare resistance and what I found isn’t invasive nor any worse than other Fujifilm lenses. I only found very small amounts of chromatic aberration but here as well, the lens performs just fine. Whether it is the lens or the camera software, I’m not sure, but it is effective.

The autofocus performed well with the X-T10 and X-T1 and is on the same level as the most recent Fujifilm primes. I used the lens a few times to test the autofocus capabilities of the new X-T10 in addition to the kit lens, and I found it fast and silent, just as you would expect.

The lens doesn’t have any optical stabilisation. If you are careful enough while shooting you can get good results with slow speeds down to 1/30 since a shorter focal length will result in fewer micro shakes. However while shooting The Retrievers, I occasionally extended my arm as much as possible to capture more interesting low angle shots. I was less stable and even with shutter speeds like 1/60, I had some blurry images.

The XF 16mm f/1.4 is yet another excellent prime lens for the X series line-up. It produces excellent sharpness at its fastest apertures and proves a more versatile lens than you might think. There are some minor issues like flare and a lack of sharpness at the corners from f/1.4 until f/2.8, but nothing that would stop photographers from shooting with it.

In the end, it is the only fast prime available at this focal length for the Fuji X system, so the question is more about the individual needs of the photographer than it is about choosing between this lens and another. In my opinion, the 16mm is more specific and difficult to use than other focal lengths such as a 14mm or a 35mm lens. However it can give you good results and lots of satisfaction if you know how to take advantage of it.