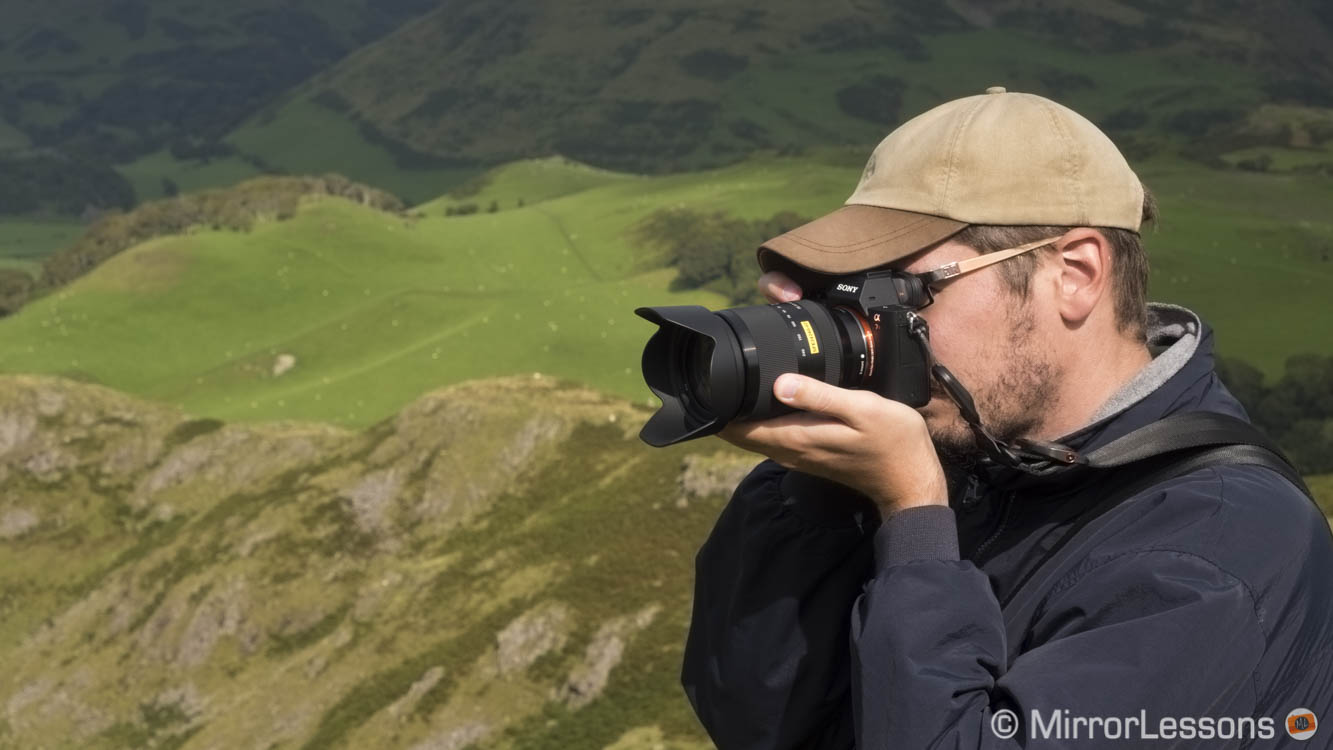 This is one of those articles that wasn’t planned but rather happened because of convenience. The 24-240mm was not at the top of my list of lenses to test but it turned out that I needed a telephoto lens to take some pictures of the Tour of Britain 2015 since Stage 1 was passing through Wales. Unfortunately neither the 70-200mm f/4 nor any of the telephoto A-mount lenses were available to hire for that weekend.

As such, I turned to the native FE 24-240mm and used it intensively all weekend to have enough material to write about. These kinds of zooms (and kit lenses too) are often not the best example of what you can get from an optical quality point of view – they are designed for convenience instead. A lens with a non-constant aperture of f/3.5-6.3 is certainly less attractive at first but when I have to review such a product, I always think back to one of my favourite photographs I took when I started taking photography seriously. It was a cold and foggy morning in 2009 and I was using a Nikon D90 with the cheap 18-105mm f/3.5-5.6 lens.

The bottom line is that some photographers will ignore these kinds of lenses while others prefer the versatility they can offer. (After all, we are talking about a 10x full-frame zoom lens here.) You can get interesting results and have the reassurance that you will never miss a shot due to not having the correct focal length mounted. However, in terms of pure optical quality, you are constrained to specific settings. It is a matter of understanding how much you are willing to sacrifice for the sake of versatility.

Note: I tested the 24-240mm on the A7r mark II. I should also specify that the article is intended more as a quick review than an in-depth article since I usually spend two weeks with the gear I test. 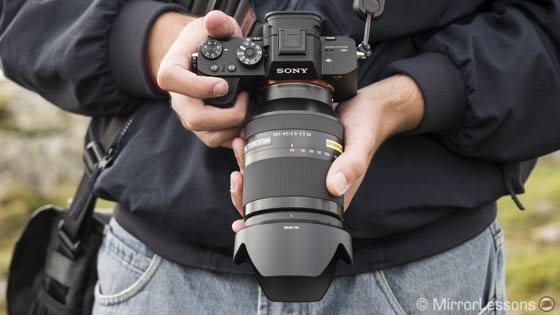 The 24-240mm is bulky and heavy (780g). It definitely feels like a DSLR lens. It is not the first time that I’ve made this comment when testing Sony’s full-frame lenses. Some of them are as large, if not larger, than their DSLR counterparts and I guess we just need to get used to it. It also depends on how the lens has been designed and what technology is built into it. For example the Nikkor 28-30mm f/3.5-5.6 is only 20g heavier and is actually slightly shorter (when zoomed out) while the Canon equivalent is heavier, larger and definitely built to higher standards (1.6kg, 184mm long).

The dimensions almost double when zoomed in which is a common characteristic of this type of lens. The zoom ring is not the best I’ve tried and lacks some smoothness. I guess Sony designed it that way so that the lens won’t extend itself accidentally but I found it somewhat unpleasant to use. The focus ring is nicer but I admit I didn’t need it during those three days.

The 24-240mm has a metal build on the outside and the two rings are covered with rubber. The lens is also dust and moisture resistant and comes with a plastic petal-shaped hood.

Through the lens: optical quality

The main reason to consider a lens like this is also the most obvious one: the convenience of having a 10x zoom allows you to take a wide variety of different shots.

The other evening while driving back home, the scene you see below suddenly presented itself to us. The sun was just about to set, and the colours and contrast were wonderful thanks to the reflection on the lake and the silhouette of the trees. Luckily I found a spot nearby to park the car so I could run back to take the shot. There were many elements in the foreground I was not interested in including in my frame but the lens allowed me to zoom out to 190mm to get the right composition. That’s what a lens like this is useful for if you don’t want to carry multiple lenses.

Now let’s rewind to Friday afternoon. I started using the lens during a walk up Bird Rock to take some landscape shots. The zoom range can be very useful for this genre because you can switch between wide scenes and isolated portions of the frame especially when there is some interesting light. Also, starting at 24mm gives you lots to work with on the wide-angle end.

While its versatility is certainly a welcome feature, I started to see the limits of this lens even during the first day. At the longest focal lengths, there is a loss in sharpness that is even more evident at the fastest apertures: the results are quite soft in the sharpness and micro-contrast departments.

At the shortest focal lengths, the optimal sharpness can be found between f/5.6 and f/8 while at the telephoto end you will get the best results from f/11 to f/16 before diffraction starts to get in the way. The performance at the corners is worse than in the centre. Depending on the light, shooting at f/11 may also mean you’ll have to use slower shutter speeds and deal with some blur. The A7r II stabilisation system helps but with the original A7r, I would advise that you use a tripod.

The lens deals a little bit better with sharpness when you focus closer. The minimum focus distance is more interesting at the telephoto end (50cm at 24mm and 80cm at 240mm) and can indeed give some nice results with acceptable sharpness. Also, if you take advantage of the telephoto capabilities, it can also be a decent lens for occasional portraits.

The 24-240mm can suffer from heavy distortion both at the wide and telephoto ends. However a simple click on the lens profile in Lightroom CC will fix it almost entirely. The same thing happens with the in-camera JPG processing. This is how every Sony lens works; they produce lots of distortion in the native Raw files but the results can easily be corrected with the dedicated lens profile (even the Zeiss Batis lenses are based on a similar concept, although distortion is less severe). This is why it becomes difficult to judge the lens from this point of view: distortion can be awful but also easily corrected with the dedicated lens profile. If you observe the final output, I would say it is okay even though your frame will receive a tiny crop at the edges.

Below is an example before then after applying the lens profile in Lightroom CC.

Vignetting appears especially on the wide-angle end but the same reasoning applies here: you can get rid of it easily in Lightroom and the camera takes care the OOC JPG. I haven’t found any relevant traces of chromatic aberration so that is something that is well-controlled from the start.

Below is another example using Lightroom CC.

Sony doesn’t mention any special coating for minimising flares but overall the lens behaves well. I found some minor ghost flares like in the example below.

On Saturday I visited the town of Porthmadog and had a journey on the Ffestiniog Railway (with a great pint of Welsh Black Beer) so I basically used the lens as a travel photographer would have. Overall the autofocus performance was excellent with the A7r mark II in all sorts of situations including backlight.

As I said at the beginning of this article, the main reason I hired the lens for the weekend was to photograph the Tour of Britain passing through Betws-Y-Coed on Sunday. The weather was cloudy and given the not-so-fast aperture, I had to accept a compromise by shooting at f/5-6/6.3 and sacrifice some sharpness to keep the ISO under 800 and a fast shutter speed between 1/800 and 1/1000. The autofocus motor works well with the A7r mark II AF system but for fast moving subjects, I noticed a slightly slower performance in comparison to other FE lenses. It’s not the best combination for sports photography because of the slow apertures, the lack of sharpness wide open and the slow-ish AF motor.

The lens includes optical stabilisation (Sony Steadyshot) but that is a feature I couldn’t test completely since the A7r II uses it in conjunction with the sensor stabilisation. After the Tour of Britain, I had a walk along the Afon Llugwy river and tried to take hand-held shots with slow shutter speeds to give the water more movement.

I was able to push the shutter speed down to 1/3s at 24mm and 1/15s at 240mm but not without several attempts. I admit I am not particularly impressed by the 5-axis stabilisation of the new A7r II so I wouldn’t be surprised if you can get similar results with just the optical stabilisation on other A7 cameras (perhaps with 1/2 or 1 Ev less compensation).

It is difficult to make a final judgement on this lens because it is the only one of its kind for the full-frame E-Mount system. So it is either this one or nothing if you are looking for an all-purpose zoom to use on your Sony A7 camera. In its defence, it covers a very intelligent range of focal lengths. Starting at 24mm instead of 28mm like other similar zooms gives you more room for wide-angle shots.

All things considered though, I have to say that this lens is a no-go for me and that is because of its price. At nearly $1000, I would have expected better optical performance at the fastest apertures. Shooting at f/6.3 at 200mm can already be quite limiting in some situations, and these limits only increase if you want the best sharpness at f/11.

Perhaps testing it on the A7r mark II and its 42 megapixels was an overly harsh test for the lens – a 24MP sensor might be more forgiving. You need high quality lenses to get the most out of the sensor in cameras like the A7r II and this 24-240mm, in my opinion, is not one of them. The performance is decent and if you want versatility more than anything else, it can do the job once you recognise its limitations. Still, it would make much more sense if it cost half its current price.