You are here: Home / Panasonic Reviews / GX8 / A first look at Panasonic’s Post Focus function with the Lumix GX8 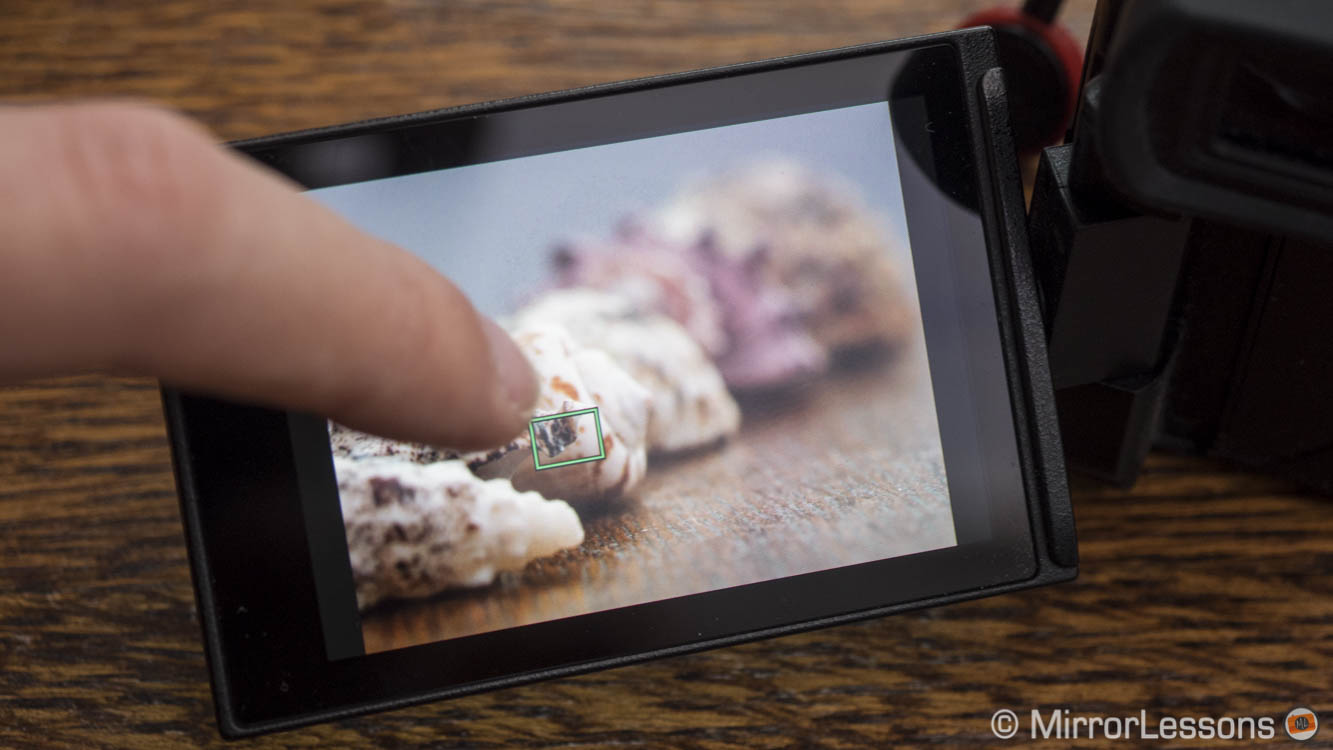 Today Panasonic released an interesting firmware update for Lumix GX8, G7 and FZ300 (bridge camera) users. The new and highly anticipated Post Focus feature allows you to select the focus point after taking the shot. From the first SLR camera with autofocus capabilities introduced in the eighties to this new feature, there’s no doubt that photographic technology has come a long way in a relatively short period of time.

If you’ve come across Lytro cameras, you’ve probably already heard of the concept of post focusing. However the Panasonic technology employed here is completely different to Lytro’s and in actual fact, it is not entirely new. Some smartphones can already achieve similar results like the Nokia Lumia series via its Refocus app. However, it is the first time that such a function has been integrated directly into a mirrorless camera.

How does Post Focus work and more importantly, is it really useful? Let’s find out!

Note: all the images in this article are available at their native 8MP size. Just click on any of them to open up the full res version.

Lenses used with the Post Focus function on the GX8:

Lytro cameras such as the Illum have a special sensor that is completely different to traditional Bayer CMOS sensors in that it is based on light field technology. It is covered by micro lenses that capture the entire light spectrum of a scene. Then Lytro’s proprietary camera software can determine the direction of the light rays. As a result, you can change the focus point as well as the depth of field and the perspective of your image after taking the shot. You can do this both directly within the camera or with Lytro’s desktop software. You can also export one image as a video file where the focus point and perspective becomes animated.

Below is a quick video that shows you what you can do with a Lytro camera.

The Post Focus feature by Panasonic works in a entirely different way and is based on the 4K video capabilities.

Like the 4K Photo and 4K burst options, the GX8 takes a 4K video at 30fps and changes the focus point between each frame from the closest element detected in the image to the background or farthest element in the scene. The camera’s software allows you to then change the focus point by “scrolling” through the entire 49 AF points the camera recorded with each video frame. You can only make changes using the camera itself, not in post-production.

Below you can see a Post Focus 4K sample video that shows you how it looks when watched as a normal movie file. Further below is one 8MP JPG saved from it.

Although the Lumix camera makes this process very fast and easy, it is technically something that you could replicate with any 4K camera: simply record an image and change the focus distance from the foreground to the background. Then, if the camera doesn’t allow you to extract a single frame, you can do it at home with a video editing software.

Once you’ve updated the firmware of your camera, you can scroll through the camera menu system where the Post Focus option is located on the third page. You can also assign it to a Function button which is what I did right away to access the feature quickly (I chose the Fn13 button located on the shutter speed dial). 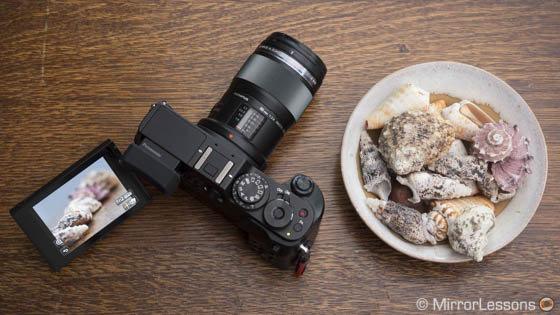 Once the Post Focus feature is set to On, the camera switches to the electronic shutter and will only allow you to adjust a few settings. Of course manual exposure controls are there but since we are talking about 4K video, the maximum ISO value available is 6400.

You can also select the photo style (picture profile), metering mode, white balance and the 4K aspect ratio. Concerning the latter, one thing to note is that the camera will crop the sensor in order to shoot with the different aspect ratios available. The concept is similar to the multi-aspect ratio technology that Panasonic uses on some of its cameras; the angle of view remains unchanged regardless of whether you choose 4:3, 16:9, 3:2 or 1:1 (the same thing happens with 4K Photo and 4K burst).

The camera won’t allow you to select a specific focus point. Post Focus only works with the 49-Area mode and the camera will pick them automatically. Also the AF/MF selector becomes inactive: even when set to MF, the camera will still focus automatically. In the case of the GX8, the Dual IS stabilisation is disabled and only OIS (on compatible lenses) will be effective.

Once you’re happy with your composition, you simply press the shutter release button and the camera will start to record a 4K burst while varying the focus point as much as possible depending on the scene. It tends to go from the shortest distance to the longest but it can also focus back and forth a few times to make sure every focus point is recorded. Then you will have to wait a few seconds while the camera is processing all the frames before switching to playback mode. There you can start selecting your favourite focus point by either touching the screen with your fingers or using the arrow pad to scroll through the different AF points. You can also magnify the image and display peaking to select your focus point more precisely. By pressing the MENU/SET button you can save an 8MP JPG image. You can save as many JPGs as you want.

Below you can watch a quick video that shows you how Post Focus works.

The amount of frames recorded depends on how many changes the camera needs to perform as far as the focus distance is concerned. For example for a landscape shot taken with a telephoto lens such as the image below, the 4K burst was very quick because the camera had only two different focus points to record between the foreground and background.

On the contrary, for the macro shot below with different shells aligned one behind the other, the camera transitioned between all the different focus planes of each shell.

The Post Focus features works with all Micro Four Thirds lenses that support autofocus. I didn’t see any difference between using a Lumix or Olympus lens. Most of my shots were taken hand-held and even with lenses lacking O.I.S., it worked. Since you are recording video, I advise you to keep a shutter speed that is at least 1/60s. If you are shooting hand-held, you might want something faster than that – otherwise you will end up with some blurry frames.

If you are shaking or moving too much while taking the 4K burst, the camera could cancel the post focus recording and only save a video file instead (it happened a few times with the M.Zuiko 45mm). With telephoto lenses it can be a good idea to activate the self timer so that you won’t inadvertently alter your composition while pressing the shutter release button.

Does it work with moving subjects?

It depends. Since the camera is in fact recording a video file, any movement between frames will be visible. In the example below you can see a man walking in the background. You will notice that his position changes depending on whether I select my focus point from the foreground or background. This happens simply because the camera records a video, one frame after the other.

Where the Post Focus function can struggle is with a very “busy” scene where the background is not visible enough, such as the example below. In this case the camera switched between different focus points in the foreground but couldn’t focus on the caravans in the background because the AF points weren’t small enough.

Another challenging situation is where lots of elements are moving in the wind. The Post Focus worked well but the elements changed position between the beginning and end of the video. For this reason, it is worth bearing in mind that the specific element you might want to isolate may not always appear in the same place in the frame.

Finally if you are shooting people, they have to remain as still as possible. In the last example below, Heather closed her eyes briefly when I started to record.

As soon as I installed the new firmware, I was very curious to see how this new Post Focus feature would behave. However once I took all the images I needed for this article, I started to ask myself when I would actually use such a function and that is where I struggle to find an answer.

So let’s rewind a little bit: what could be a concrete example where I could clearly benefit from changing my focus point after taking the shot? The only answer that comes into mind is: when the camera messed up focusing in the first place!

Even though Panasonic cameras are among the best in the mirrorless segment when it comes to AF performance, they aren’t perfect and can fail at times. However, this usually happens for specific action genres that require continuous shooting and continuous AF settings, which is exactly when the Post Focus feature would be useless. In every other situation, I’ve found the AF speed of the GX8 fast enough, even in low-light conditions.

Sure, I could use Post Focus to have more artistic choice especially for an image that has lots of shallow depth of field. But knowing myself, I would prefer to take multiple shots manually with different focus points so I could have the full resolution JPGs and RAW files instead of having just the 8MP JPG option.

The Post Focus feature is interesting because it shows how much potential there is behind 4K technology. In the case of Panasonic, it is not all about video – the brand is exploiting these high resolution and high frame per second capabilities for photography needs as well. The 4K Photo option is useful because it helps you capture unpredictable and fast movements more easily. But in this case, I can’t think of a single situation where I might hesitate about where to place my focus point. If I am not satisfied with my choice of focus point or if the camera didn’t focus where I wanted, I could always playback the result and take another shot if I am not happy with it.

Make sure to check out our in-depth article about 4K Photo. And don’t forget to tell us what you think of Post Focus in the comments section below!