You are here: Home / In Depth / Essays / Angles of view and Points of view 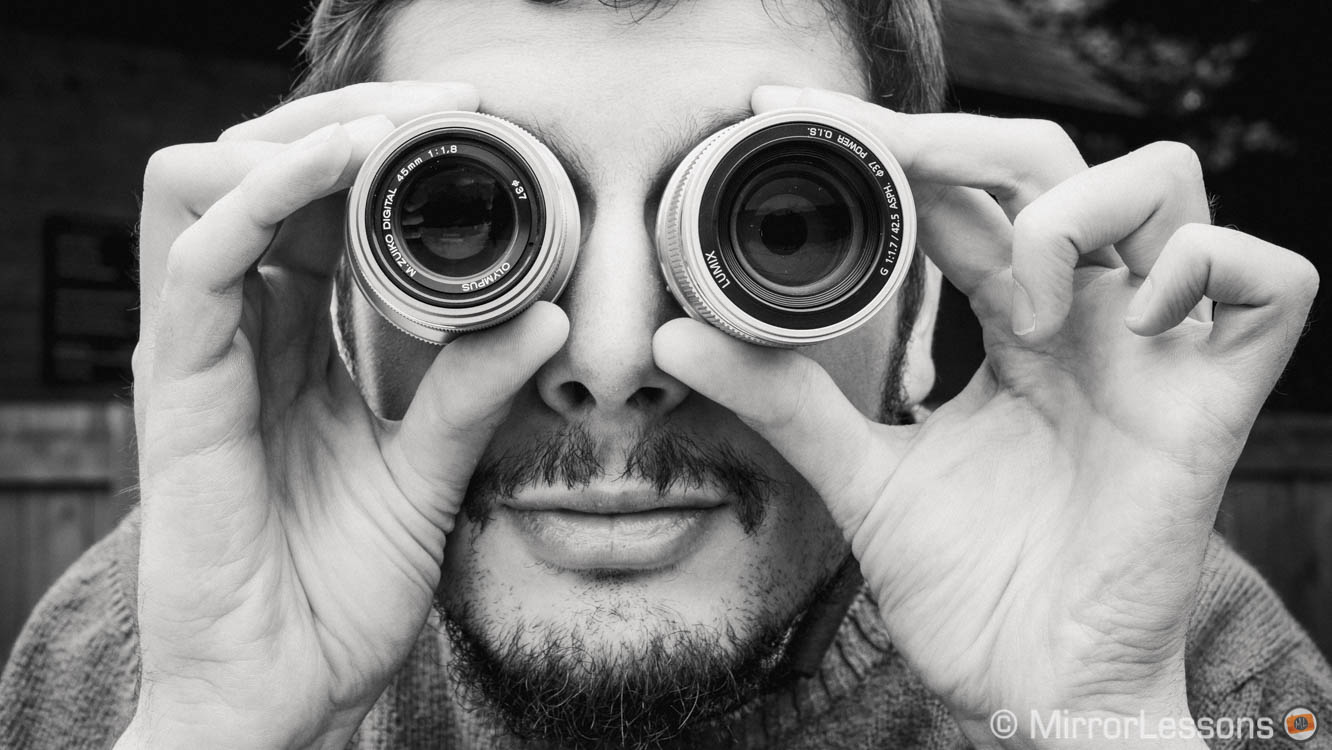 Reviewing camera equipment often requires us to compare specifications because each system is different, beginning with the sensor size. One of the most common comparisons involves focal length equivalence, a topic that often generates some confusion. The most recent example we’ve encountered concerns the new Olympus 300mm f/4 Pro (see our review here) that gives the equivalent focal length of 600mm on a full-frame camera. Not only have I read many discussions, but I’ve also received a few comments stating that this comparison is not fair and that a 300mm is a 300mm lens regardless of the sensor that resides behind it.

Is it correct to compare the M.Zuiko 300mm to a 600mm lens designed for a full-frame system?

In this article, I will try to explain why in my opinion the comparison isn’t unfair. But let’s start by brushing up on few concepts to make sure we have the correct basis from which to start.

First I want to talk about angle of view (also known as field of view) which is the largest view a sensor is able to “see” through a lens. For me this is important because it has a concrete impact on the composition of my image.

Then there is the “full frame” reference. In most cases, it is related to the 35mm format (36x24mm) which was the most popular film back in the day. (Note that the full-frame term is also used for medium format.) When the first digital cameras came out, their digital sensors were smaller than the 35mm format. As a result the angle of view we used to know and love with a 36×24 film lens was narrower on those digital cameras. This introduced the crop factor as we know it today. We had to learn to calculate what angle of view a lens designed for 36×24 would give on the smaller sensor. The easiest way became to mention the equivalent focal length simply because we refer to lenses according to their focal length more than the angle of view they produce. However, remember that technically, if I use a lens on a smaller sensor than the one it has been designed for, it is the angle of view that changes, not the physical focal length.

Today things have become more confusing because we have several camera systems on the market each with different sensor sizes including a digital 36×24 that matches the 35mm film format. It is not just a matter of comparing focal lengths within the same system/brand but also understanding the equivalent focal length between different systems/brands. So to “simplify,” the 36×24 format has been kept as a reference and even the various photography brands list it in the official specifications of their products. It helps us to quickly understand what kind of field of view a lens designed for a smaller sensor will reproduce.

With the basics above covered, let’s move forward and compare two camera systems.

On one hand we have a full-frame 36×24 camera and on the other, a Micro Four Thirds camera with a smaller sensor (crop factor is 2x). I am going to explain why the angle of view here is what matters more than the focal length written on the barrel. To do this, I will start with a classic example: the 50mm lens.

A 50mm lens on a 36×24 sensor gives an angle of view of 47°. We often refer to it as a “normal” or “standard” lens because it has an angle of view close to that of the human eye. Note that this association works only if we consider the central angle of view of our human eye which is around 40/60° and that mostly impacts our perception (meaning looking at something without turning our eye to the left, right, up or down). Because of this association, the 50mm lens has been very popular since the film days (it was also a common kit lens). We don’t really care about the actual physical focal length here but we do care about that 47° angle of view we like to shoot with. That’s the truly important specification.

If that standard angle of view is a “must-have” for the photographer who wants to use a Micro Four Thirds camera, the first thing he will check is which native m4/3 lens gives him the desired field of view and he will find out that it is the 25mm (that has the same 47° angle of view on Micro Four Thirds). If he wants to use a Fujifilm camera (APS-C format), he needs to look for a 35mm focal length.

Of course, this reasoning can be applied to every lens. My point here is that a photographer normally chooses a lens according to what he wants to photograph. Does he want a vast angle of view (wide angle) for architectural shots or something as narrow as possible to capture images of birds (telephoto)? The focal length is a common reference but the angle of view is what really matters for the photographer’s vision, especially if we compare lenses designed for different systems and sensors.

When I switched from my Nikon D700 to the E-M5 and subsequently the E-M1 for my work almost three years ago, I started to replace my lenses step-by-step, keeping the same or closest angles of view I had for my full-frame DSLR. I started with the M.Zuiko 12mm and 45mm because I had a Nikkor 24mm prime and an 85mm portrait lens. Then I added the Lumix 35-100mm f/2.8 because I was using a Nikkor 80-200mm f/2.8. I think you get my point.

So if I go back to the Olympus 300mm, it is correct to state that it gives the same angle of view as a 600mm lens on a full-frame camera for the two reasons I explained above: 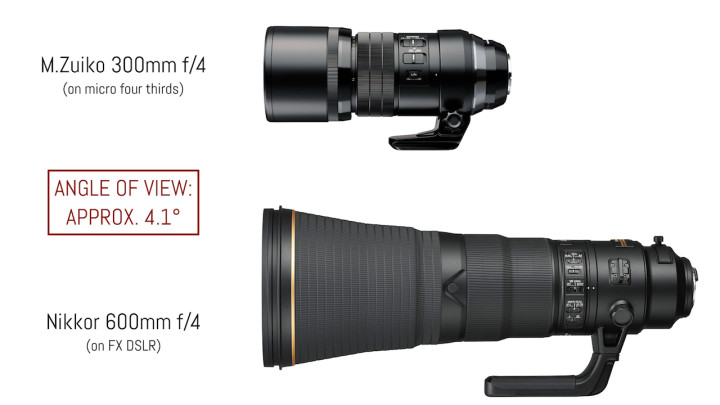 But even more important is that this comparison is a starting point. It doesn’t imply that one is better or worse than the other. It gives a reference, nothing more.

Of course in this case it also highlights the advantage of the M4/3 version – namely, its smaller size, weight and price compared to the DSLR lens  – but that has always been the case with Micro Four Thirds.

From this starting point, we can put other considerations on the table as well. For example a DSLR system has various telephoto prime lenses (from 300mm to 800mm) and two systems (APS-C and 36×24). If I add to the equation the various teleconverters (1.4x, 1.7x, 2x), it is clear that DSLRs still have more versatility for those in need of extreme telephoto lenses (and I could also mention the zoom lenses).

We could also talk about alternatives which in this case involves adapting a lens to a different camera system. For example, I recently saw some excellent shots posted to the MU-43 forum that were taken with a 300mm f/4 Sigma lens used on an OM-D camera. Of course you lose the autofocus as well as optical stabilisation, unless you buy an adapter with AF (but I don’t want to go off topic). If you can cope with manual focus, you can get excellent results. After all one of the advantages of a Micro Four Thirds system is the possibility to adapt lenses and get a narrower angle of view and more telephoto reach. Actually the Nikon or Canon 600mm on an OM-D E-M1 would give us a 1200mm equivalent focal length, but I wouldn’t use such a massive lens on such a small camera.

Finally I will add my two cents about a recurring argument concerning this topic:

A full frame DSLR with a 300mm and some cropping in post-production will give the same results. Well, let’s do some math to see if this is true.

We have a Nikon D810 with its 36 Megapixel 36×24 sensor. The camera has a DX crop mode (APS-C) that outputs a 15.4 MP file. The Nikkor 300mm f/4 with the DX crop on the D810 gives us an angle of view of 5.20° (450mm equivalent). To match the same 4.10° angle of view of the Olympus lens used on the OM-D E-M1, I would need to crop further in post production for a final size of approximately 9MP. That is almost half the native 16MP I would get on my E-M1. Even taking into account the Canon 5Ds and its 50MP sensor, I would start from a 19MP file with the camera’s 1.6 crop and then I’d need to crop a second time. I am not sure there is a concrete advantage here. More important this comparison doesn’t hold water because it misses two crucial points.

First the Olympus 300mm will primarily interest those who already own a Micro Four Thirds camera. Those m4/3 users are not necessarily interested in considering a camera and a lens of a different system as an alternative to a native lens designed for the camera they already use. Second I know that cropping in post is a common solution in today’s digital era but if you buy a lens that gives you such a narrow angle of view, you usually do it because you like that kind of reach and you enjoy using it in the field rather than working  in post production. I assume that when Canon releases its 120 MP camera, this will become an even bigger possibility but as far as I’m concerned, it takes away the fun.

I find it much more fascinating to photograph wild animals with the appropriate angle of view rather than relying on the megapixel count of my camera.

I think that what bothers many people is that the new Olympus lens is larger and more expensive than the average m4/3 gear and I am sure that some even think that Micro Four Thirds is not worth such an investment.

Well, the only thing I can tell you is that I often see photographers at nature reserves with their large DSLR and lenses. Regardless of the focal length or camera used, the E-M1 with the 300mm feels smaller and lighter. More importantly, this type of lens wasn’t available before. It is an important step forward for the system and all mirrorless brands are working in the same direction. Panasonic just released a very interesting 100-400mm zoom, Fujifilm is preparing its own 100-400mm and I wouldn’t be surprised if we see something from Sony later on. Mirrorless systems are growing and that is what matters, for the users that have already invested in these systems and for those interested in using them in the future.

Of course this is my personal point of view and I am sure that other people will have their own. There are various angles of view but also different points of view. The important thing is to pick the one that suits your photography best!