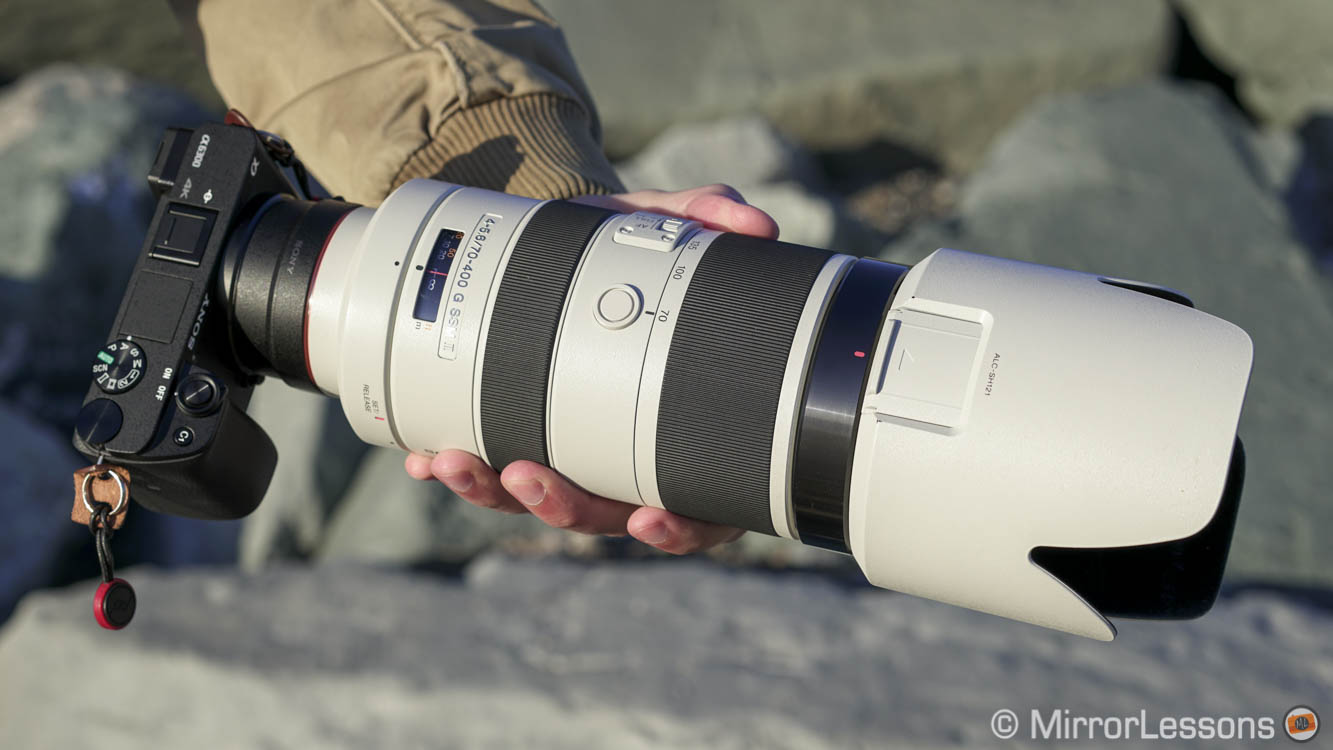 Like the Sony A7 II and the A7r II, the Sony a6300’s phase detection AF system allows you to mount lots of different lenses including A-mount and third party DSLR lenses without experiencing a significant decrease in performance.

Last year I performed an in-depth autofocus test with the Sony A7r mark II to see how accurate and reliable the AF could be with non-native lenses. This year Heather and I are performing a similar test with the a6300.

After seeing the excellent low light capabilities at a football game, I went back to my trusty Red Kite feeding ground to see how the phase detection system would perform with a Sony telephoto lens designed for the DSLT system.

Of course there are many different A-mount products available and the AF performance may also be influenced by the capabilities of the lens you’re using. As usual, I prefer to test a lens that doesn’t have an E-mount equivalent. I believe it makes more sense to try something that can be a complement rather than a duplicate.

Since I am into birds in flight lately, the 70-400mm G mark II seemed like the optimal choice. This type of zoom is normally designed for wildlife and sports, so it was perfect to test the autofocus.

Preface: the adapter and important settings

Sony has two types of A to E-mount adapters:

The best performance with an A-mount lens on the a6300 can be achieved with the Sony LA-EA3 adapter (like the A7r II). Because the camera incorporates so many phase detection points (425), it doesn’t need a separate AF sensor like the one found on the more expensive LA-EA4.

Why the LA-EA4 doesn’t work well

The LA-EA4 incorporates a translucent mirror and a dedicated AF system with 15 points (3 of which are cross types). Basically it’s like mounting a mirror system with a separate AF sensor to a mirrorless camera. It only makes sense for Sony CSCs that have an older phase detection system or lack phase detection completely.

On the a6300, such an adapter would result in significantly slower performance because the AF sensor of the LA-EA4 is less powerful. Plus there is no way to select which system to use (the one on the camera or the one on the adapter). This is why the LA-EA3 makes more sense.

In the menu, you have to make sure to select the right settings to get the best performance. When you mount a DSLR lens via an adapter, you can choose manually between contrast detection and phase detection: make sure to choose the latter.

For the AF priority settings, my advice is to select AF to make sure the camera uses focus priority. You can also try “Balanced Emphasis” where the camera is supposed to choose between waiting to have the image in focus and taking the shot anyway so as not to miss the moment. I haven’t noticed a substantial difference between these two options but Balanced Emphasis can encourage the a6300 to seek less focus accuracy.

When using an A-mount lens, there are a few AF settings that can’t be selected including:

What’s curious is that these settings are disabled in still shooting mode but become usable again if you switch to video mode. I know that the a6300 uses phase detection during video recording, so it makes sense that all these options are available.

However I don’t understand why the same options can’t be used for stills as well especially considering that the new Sigma MC-11 adapter (for Canon EF lenses) seems to be compatible with all AF settings. Perhaps Sony needs to update the LA-EA3 to enable more options.

I can start by saying that the results are similar to the ones I found with the A7r II last year. The A-mount lens is not as fast as an E-mount lens. It struggles in continuous AF especially when dealing with fast moving subjects at medium or short distances.

In single AF, I found the results encouraging. Occasionally the AF can be slower if the subject is far away and the lens starts focusing from the shortest distance but otherwise the a6300 managed to lock on quickly most of the time.

The best AF area setting is either the central or flexible spot area. Wide Area can cause the camera to focus on something else rather than your subject especially if it is static.

Before sharing my “birds in flight” results, I also performed a basic test with Heather running towards me to simulate the marathon event I shot last year with the A7r II and 70-400mm (first version). Sadly the performance remains the same here: the camera had a hard time keeping the AF point on the subject. It will start by locking correctly but then it will progressively lose focus as the subject gets closer to you. I tried different settings but the results were always the same. This indicates that the combo is not really well-suited to sports.

With the red kites I got better results which means that you can use this lens if you are patient and ready to accept some compromises. I got an average keeper rate of 45% which isn’t great but not completely discouraging considering the difficulty of the genre itself.

Here again I noticed that the camera is not fast enough to track the subject. The first shots are sharp but the bird gradually becomes blurry. This happens less if the bird is far off and maintains a constant distance from the camera.

The high density tracking feature that concentrates more AF points on the subject works well but can also confuse the subject with the background (trees for example).

Here the best AF setting was definitely Wide Area because the camera can pick whatever focus points it needs, even if I don’t keep the bird at the centre of my frame. The Sony a6300 has so many phase detection points that they cover almost the entire sensor. It can focus even if the subject is at the edges of the frame. That is something I have to praise this camera for: the AF performance seems to remain the same regardless of the sensor area used.

Another tip is to use the slowest continuous shooting speeds (3fps) instead of the fastest or to select the single mode. The camera seems to follow focus better when the burst rate is lower. It won’t improve things dramatically but at times it can be useful.

With a continuous shooting speed of up to 8fps (Hi), you have the benefit of a continuous live view with a minor lag which somehow simulates the experience you would get with an optical viewfinder. You get blackouts between the shots but they aren’t 100% black most of the time. Rather they keep a fair level of transparency so you can see what your subject is doing.

The actual movements of the subject remain fluid and realistic. I found it easier to see what the kite was doing (like bringing the food to its beak) but the constant change in brightness caused by the blackouts is somewhat annoying.

I also performed a few tests in video mode but the AF was definitely slow. In Single AF it can perform well enough but as soon as the composition becomes busy, the camera has a hard time focusing on the subject and the elements of the lens keep moving back and forth. In continuous mode, the AF was slow as well.

Conclusion and thoughts about the ergonomics and ease of use

Of course, the following findings will vary depending on the lens being used but it is important to understand that the a6300 is a very light and compact camera. The user experience is great with small or medium primes and zoom lenses designed for the APS-C sensor.

A few full frame lenses can fit the camera well but larger and heavier lenses can spoil the ergonomics.

As you can see from the photo above, the adapter alone is as tall as the camera itself. The 70-400mm is definitely too large for the a6300. The same reasoning can be applied to other telephoto A-mount lenses as well as other DSLR lenses from Canon and Nikon.

Because the camera is so light, the weight is not spread out over the entire combo which means it becomes very tiring for the hand that is holding the lens. One solution can be to use a monopod but it won’t solve the problem entirely.

We could ask ourselves what the purpose of using such a large lens on a small mirrorless camera is. Indeed, I knew that the match would not be ideal from the start. My purpose in this case was to see if the AF performance was worth the extra size and weight.

I must admit I am not convinced. The lens is large, expensive, and lacks optical stabilisation which is disappointing. I know there isn’t an equivalent lens for the E-mount system right now but I am sure it will eventually show up. Sony recently announced the FE 70-300mm f/4.5-5.6 which already sounds like a better match (105-450mm equivalent).

Can other A-mount lenses be a good match for this camera?

I feel there are a few like the 16-50mm f/2.8 that is designed for APS-C sensors. It gives you an equivalent focal length of 24-75mm. This is actually a lens I would love the see re-designed by Sony and made into a native E-mount version. The mirrorless APS-C system is missing this kind of product.

However I would not consider A-mount lenses for the a6300 alone. If you already own some A-mount lenses, the only thing you’ll need is the adapter, and if you also use a Sony DSLT camera, the lens can fit two purposes. But if you don’t own any A-mount products at all, I am not sure it is a wise investment if you consider that other native E-mount lenses will soon be on their way.