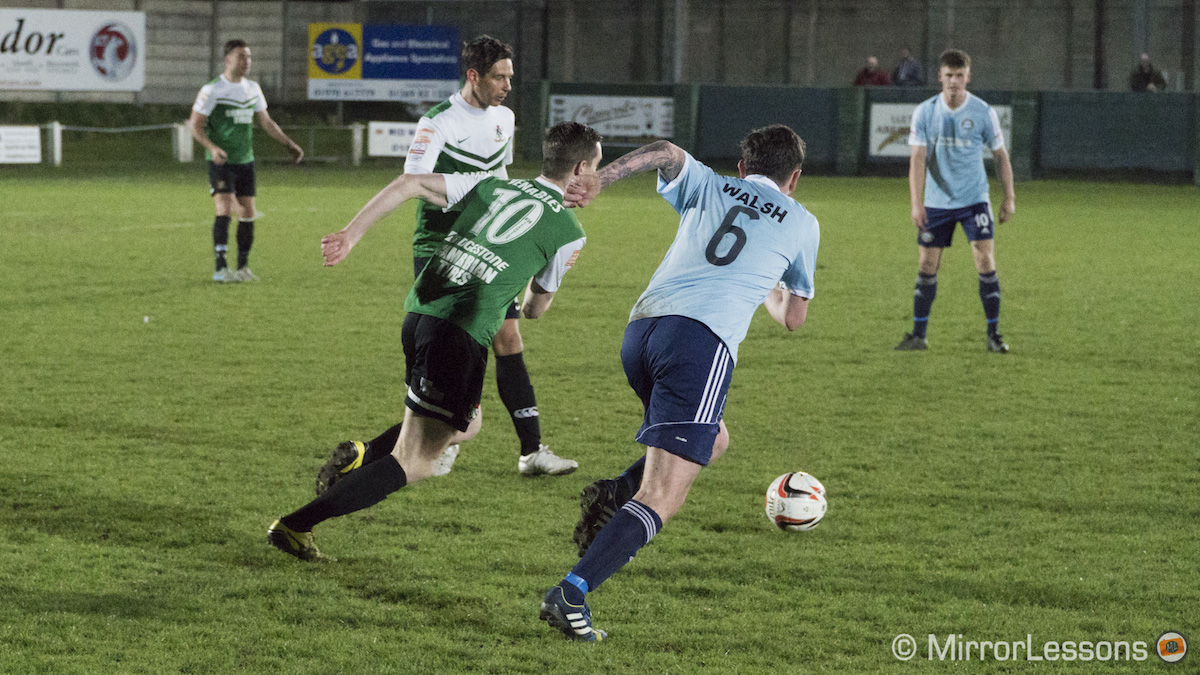 Last night was our first chance to test the Sony a6300 in earnest after spending four days at the Photography Show in Birmingham. Knowing that the autofocus capabilities are supposed to be spectacular, we took the camera straight to a local football match between our local team, Aberystwyth Town, and Rhyl. I should mention that by winning the game, Aberystwyth managed to keep themselves in the running for the all-important UEFA Europa League Play Offs – way to go, guys!

The match took place at 7:45 p.m., meaning there wasn’t any ambient light except for the floodlights on the field, and the only lens I had with me was the E-mount 18-105mm f/4 whose telephoto capabilities are somewhat lacking for this kind of sport and whose aperture, while constant, isn’t particularly bright. Following moving subjects in broad daylight is a challenge in and of itself, so I knew this low-light test would push the a6300 to its limit. As you’ll find out, I was quite amazed by the results.

Note: I am not a sports photographer, and there is no question that in the hands of a seasoned professional, this camera could produce even better results.

Before I begin, I’ll share a few words about the characteristics of the Sony a6300 and why it is potentially the best mirrorless camera for sports photography.

The camera’s new High Density Tracking AF Technology concentrates more autofocus points on the subject once the camera detects it (7.5 times the coverage density of the a6000). Thanks to the BIONZ X™ image processing engine, it also has the world’s highest AF speed of 0.05s (according to Sony of course!).

These characteristics combined make the a6300 a machine built for one purpose: to capture fast-moving subjects quickly and accurately.

Below you can find the exact settings I used during the match. They are similar to the settings we use on our Sony A7r II whose autofocus system is quite similar, though not quite as advanced.

Zone allows you to focus on a limited zone within your frame. It isn’t as precise as Centre or Flexible Spot and it doesn’t cover the entire frame like Wide. I’ve found it more effective when you are photographing one or only a couple of players and you’re able to keep them within a specific area of your frame. The Zone area can be moved to different positions across the frame as well.

Wide is better when you are dealing with multiple players whose movements are unpredictable. Since there are 425 phase detection points covering almost the entire sensor, the camera manages to track the players regardless of where they move within the frame.

There are four different burst settings on the a6300: Low (3fps), Medium (6fps), High (8fps) and High+ (11fps). I chose High because it is the only mode that gives you an uninterrupted live-view.

In Focus Priority the camera takes the shot only when it manages to focus on something. (Hopefully that “something” is your subject!) Release Priority will take a picture regardless of whether it has locked focus or not. For review purposes, I opted for Focus Priority to gain a better understanding of how the AF performs. However, many sports photographers tend to use release priority so as to not miss any action.

You can choose between 50fps and 100fps but the latter is more fluid. Unsurprisingly, it also drains more battery life.

Note: if you are in NTSC mode, the frame rate options will be 60fps or 120fps.

Given the lack of light, I chose ISO speeds between 3200 and 12800 and changed my shutter speed accordingly while keeping my aperture at f/4 at all times. I found the high ISO performance quite acceptable up to 6400 but I was reluctant to go beyond 12800 because of excess noise and loss of fine detail.  (I’ll discuss this more in a future article.) To keep the players in focus, the slowest shutter speed I used was 1/500s but when that wasn’t enough, I raised my ISO and used 1/640s and 1/800s.

How did the a6300 autofocus perform?

When I began shooting, I was immediately bowled over by the accuracy of the camera’s High Density tracking system. Even when in Wide Focus mode, the phase detection points immediately sprang to life and clustered around the subject whenever one entered the frame.

Looking back at my images, the second thing that impressed me was the keeper rate. While on other mirrorless bodies, I’d been used to a keeper rate of 50-70% (depending on the camera model), the a6300 delivered about 80% perfectly in-focus shots, 15% slightly out-of-focus shots, and 5% missed shots over the course of the game.

In the case of the slightly out-of-focus shots, human error also played a role about half of the time. For example, I started out by using 1/500s but it was too slow for some of the action. Once I raised the shutter speed, my keeper rate improved dramatically. Similarly, when I was in Zone Focus mode, I wasn’t always successful at keeping my subject within the selected zone, resulting in slightly soft images.

The completely out-of-focus shots tended to occur when I suddenly zoomed out from 105mm to a shorter focal length and immediately tried to release a burst of shots. It seems that the camera requires a split second to adjust to the new focal length and if it isn’t given the time to do so, it will focus on something other than your subject (usually the background). In this case, it helps to half-press the shutter button to reset the focus distance after you’ve zoomed out, and then fully depress the shutter button to release the burst.

Very rarely, the camera confuses the subject with the background, such as in the example below.

I did notice that when your battery life dwindles down to 5% and below, the autofocus performance seems to decrease a little. In this situation, it is always wise to change the battery before it’s depleted (15 or 10%). The a6300 is a power-hungry little beast, so it is a good idea to carry around at least three or four extra batteries if you plan on doing a lot of burst shooting with the EVF set to 100fps. To save battery life, I found it helps to turn off the LCD in the Finder/Monitor sub-menu.

How about the uninterrupted Live View?

Sony has claimed that the updated Live View minimises the display lag to the point that you almost feel as if you’re working with an optical viewfinder. Keep in mind that while there is a High+ 11fps option, Live View only works up to High burst mode (8fps). Having used the EVF for the entire game on High, I can confirm that there is an extremely short blackout between each frame, making it easy to track subjects moving at the pace of the football players.

Earlier on in the day, I also used the EVF to track our beloved red kites in flight – probably one of the toughest subjects to follow due to their quick and unpredictable movements – and I had a little more difficulty keeping them at the centre of the frame because of the blackouts, however short they were. Since I also had relatively a short focal length (105mm on the long end), I’ll definitely need to perform more in-depth tests with a longer lens to get a real sense of what it’s like to track fast-moving animals with this camera.

Are there any downsides to the a6300?

My testing period has only just begun but there are a couple of things that grabbed my attention while I was shooting the game.

First of all, there is the mechanical shutter sound. It is deceptive because the opening and closing of the two curtains results in three consecutive noises, leading you to believe that you’ve accidentally switched to burst mode. And when you are in burst mode, you may end up thinking that you’ve taken more shots that you actually have.

My advice is to simply fire off as many shots as possible during a burst, as you’ll inevitably end up with less than you expected. Or, you can switch to the electronic first curtain shutter, which makes one noise instead of three. (Keep in mind that you may experience some exposure issues at very high shutter speeds.)

Second is the eye sensor. Even with the Finder/Monitor sub-menu set to EVF only instead of LCD/EVF, it takes a split second too long to activate. For sports or wildlife, this can cause you to miss the action. Unfortunately there isn’t a way to disable the eye sensor. One alternative solution is to put a small piece of black electrical tape on the eye sensor so that the EVF always remains active.

The benefit of Memory Recall

I don’t want to go into the ergonomics, menus and button layout until my full review but one thing I want to briefly mention are the Memory Recall 1 and 2 options on the mode dial. I found them extremely useful because I was able to set one of them to be “sports ready” (shutter priority with a fast shutter speed, C-AF, Auto ISO up to 12800 and Zone AF). Having this option meant that I could quickly switch between my standard settings (aperture priority, low ISO, flexible spot) and the ideal settings for fast action without having to enter a single menu.

Since I’ve only used the Sony a6300 for a couple of days, I’ll reserve my final thoughts for the full review which will hopefully be online in a few weeks. What I can say is that the a6300’s AF performance has gone beyond my initial expectations. I knew it would be better than the a6000, which I used last year, but now that I’ve tried it out in the field, I can understand why reviewers are reacting so positively.

In my future tests, I’ll be very curious to see how both the EVF and the autofocus perform for fast-paced sports with longer lenses with a faster aperture like the FE 70-200mm f/4 or the new G Master 70-200mm f/2.8. I’m also planning to try the camera with the new Sigma MC-11 adapter, as I’m sure it will deliver interesting results paired with Sigma’s range of telephoto lenses. Let’s hope that we can find a few more sports in the area to photograph!