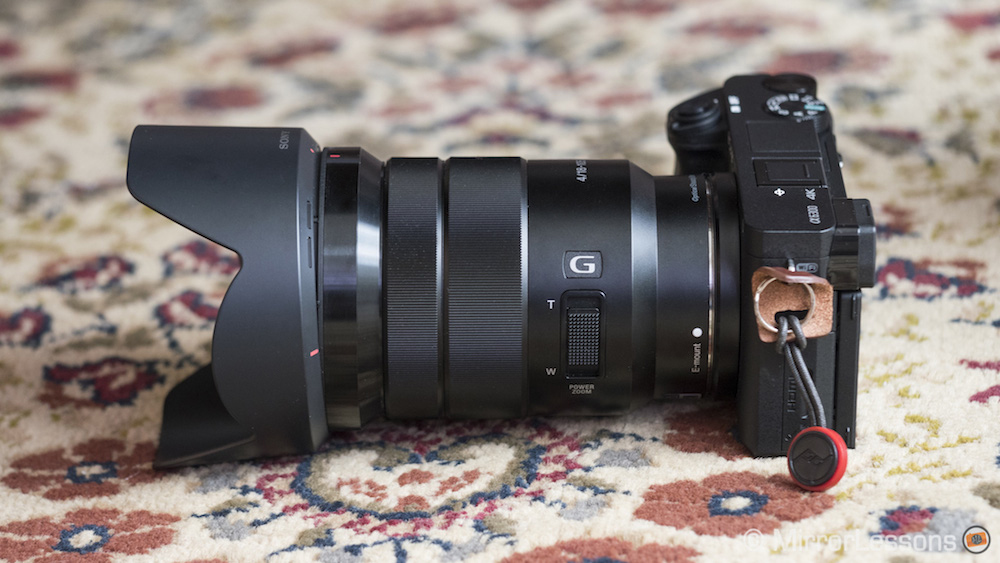 Although the Sony E 18-105 f/4 G PZ OSS was announced back in August of 2013, the first opportunity we had to use it was on the Sony a6300 this past month. Being an all-purpose lens with a very handy focal range and constant aperture of f/4, it accompanied us on a number of outings including an evening football game, a choir performance, and many nature walks.

As evidenced by the G moniker, the 18-105mm is one of Sony’s premium lenses for its APS-C range of cameras. It sports a solid metal body whose length (110mm) and weight (425g) is noticeable on the diminutive a6300 but not to the point that it unbalances the camera body. It appears even larger when you attach the supplied petal-shaped plastic lens hood. The zoom mechanism is internal so the lens doesn’t extend when you zoom.

It incorporates two extra-low dispersion elements and three aspherical elements to reduce chromatic aberrations and distortion, and a circular aperture design to enhance the out-of-focus areas.

Focusing and zooming are both controlled electronically on this lens.

To focus in manual mode, you simply turn the ribbed “fly-by-wire” focus ring to make adjustments. It is precise and easy to use thanks to the additional manual focus assists on the a6300 such as magnification, focus peaking and the distance scale that appears on-screen.

As for zooming, there are two ways to electronically change your focal length. Regardless of which you use, the a6300 will display the change in focal length on-screen so that you always know what focal length you’re using.

One way is to turn the ribbed zoom ring. It is reactive but unlike a traditional manual zoom ring, you may experience a slight delay if you suddenly zoom out from short focal length to a long one, or vice versa.

The second way is to use the power zoom lever which makes it possible to perform smooth transitions between focal lengths while shooting video. The speed of the zoom depends on how hard you press the lever. It is large enough that you can easily find it with your finger without looking, and nicely textured.

It is worth noting that the zoom will always reset to 18mm if you turn off the camera or let it go into sleep mode.

Since the 18-105mm is not weather sealed, it is best to protect the combination in inclement weather by using an inexpensive rain cover such as the one we own from Op/Tech.

Regardless of the focal length or the distance you are from your subject, peak sharpness in the centre always seems to occur at around f/5.6 with the 18-105mm. The performance at f/4 and f/8 is almost as good, while diffraction begins to set in at around f/11.

The corners tell the opposite story. While f/8 and f/11 are fairly sharp, the values between f/4 and f/5.6 are quite soft.

Speaking from a real-world perspective, I’d be quite happy using this lens at any aperture from f/4 to f/11 and even f/16 at a push. Though it isn’t as sharp as a prime, it performs well for an all-purpose lens at the apertures that matter.

You can see a full set of images taken at 18mm, 50mm and 105mm and the various apertures here.

Read any review of this lens and you’ll surely notice a full chapter dedicated to the rampant distortion, especially at the telephoto end (also referred to as pincushion distortion).

To tell the truth, it is unlikely you’ll ever notice the distortion if you use one of the latest Sony bodies (the a6300 included) because the camera’s software corrects the JPGs, while post-production programs like Lightroom automatically enable profile corrections by selecting the lens from a database.

Below you can see a corrected and uncorrected version of the same RAW file taken at 105mm. It is pretty obvious just how heavily the 18-105mm depends on software correction.

Vignetting is another deficiency that is corrected by the camera’s software and post-production programs. Without enabling the lens profile, some slight vignetting is present at f/4 but it gradually dissipates the more you stop down.

Flare does occur in some instances in the form of a rainbow or purple streaks around artificial light sources.

You’ll also observe some mild chromatic aberration up to about f/8 even with the software corrections enabled but you can easily remove it in software programs like Lightroom by going into the lens corrections menu.

As for the bokeh, I found it quite pleasing to the eye for an f/4 zoom lens. By focusing on a subject at the lens’ minimum focus distance (0.45m Wide / 0.95m Tele), you can achieve a creamy background with out-of-focus areas that remain quite smooth and round even at the edges of the frame. For this reason, I wouldn’t hesitate to use it as a portrait lens in a pinch.

The 18-105mm is a fairly old lens in digital terms, so I was curious to see how it would perform on the brand new a6300 with its 425 on-sensor phase detection points. I used it both in good light on fast moving subjects (red kites) and poor light on slightly slower subjects (soccer players).

I wasn’t able to get extremely close to the red kites but on the rare occasion that one would venture close enough to fill the frame, the a6300 and 18-105mm did a great job of locking onto the action as long as I was able to follow and frame it correctly.

Overall, my hit rate was around 70% which, given that I’m not a professional bird photographer, says a lot about the capabilities of the camera and lens.

I performed the same experiment later that day on the gulls by the beach since I was able to get closer to them, and the results were the same.

I then took the combo to a local soccer game. To summarise what I wrote in my dedicated article about game, the a6300 and 18-105mm did extremely well considering the poor light and the speed of the players.

In this case, my hit rate was actually higher – about 80% – but I partially put this down to the movements of the players being a little more predictable than those of the red kites. What’s more, had I used a longer focal length, I’m sure I would have had more difficulty keeping the players in the frame.

The optical stabilisation of the 18-105mm is more than enough for most applications, and proves a real boon on bodies lacking built-in stabilisation like the a6000 or a6300. The slowest speed I was able to achieve with the a6300 at 32mm was 0.4s. (Note that the lack of sharpness in the image below isn’t due to shakes but rather diffraction at f/22.)

It also works very well for video, particularly in tandem with the electronic power zoom lever on the side of the lens. In fact, I would say that you could easily leave your tripod at home and solely rely on the optical stabilisation of this lens for informal video shooting. If you skip to minute 2:31 in the short clip below, you can see how effective it was during the 1940s Festival in Colwyn Bay.

What more is there to say? The Sony 18-105mm f/4 is a good performer for an all-purpose lens regardless of whether you shoot stills or video.

Not only is it sharp in the centre at the most important apertures, it also has a very versatile zoom range that suits anything from landscapes to sports, and even though its fastest aperture is only f/4, it is constant throughout the zoom range.

Thanks to the lens’ power zoom and optical stabilisation, you can easily achieve smooth and steady hand-held footage on non-stabilised APS-C bodies like the a6300. Plus, it has a very pleasant bokeh despite not having an extremely fast maximum aperture or close minimum focus distance.

It suffers from distortion especially at the telephoto end but since the JPGs are corrected in-camera and the RAW files can be adjusted with the appropriate lens profile, it isn’t a cause for concern. The same can be said for chromatic aberration, which disappears with one click of a button in Lightroom.

The only aspect that would genuinely put me off buying this lens for the a6300 is the size. I wouldn’t call it heavy, but it takes up lots of room inside your bag and can be cumbersome if all you want to do is grab a few casual snapshots on a walk or do some street photography. However, this is an issue common to all constant aperture zooms with a versatile zoom range, so we have little choice but to accept the trade-off.

Also, because the lens is softer in the corners and at the edges than in the centre, those who mainly shoot landscapes may want to look elsewhere. Two good alternatives are the Sony E 10-18mm f/4 or even the Zeiss Touit 12mm f/2.8 if you enjoy working with primes.