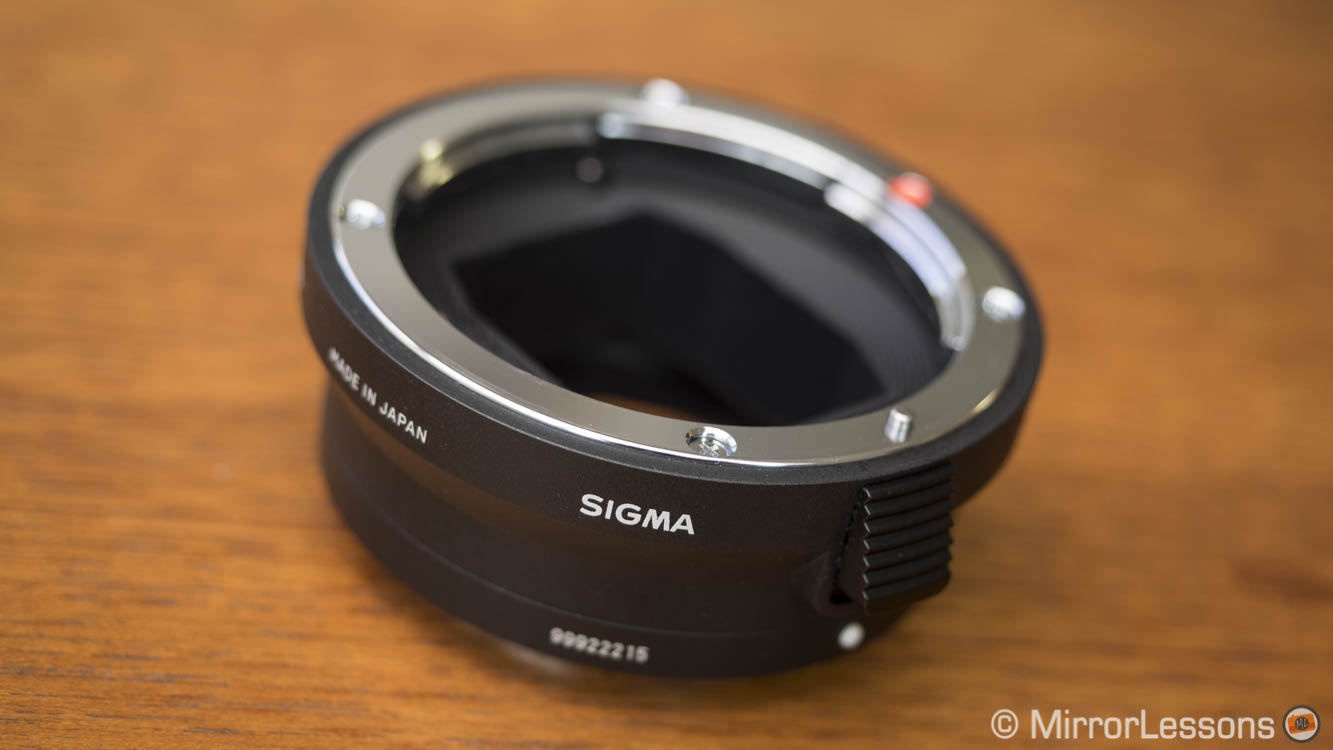 The Sony A7 series is one of the most popular mirrorless systems on the market today, and it’s not just because of the excellent sensors and video capabilities. Since the first release in late 2013, one of the main attractions has been the possibility to adapt 35mm lenses from other mirrorless or DSLR systems. The second generation of A7 cameras (excluding the A7s II) was another big step forward in that direction since their phase detection AF became compatible with DSLR lenses.

Excluding the LA-EA3 that Sony designed for its DSLT lenses, all the other adapters are made by third-party manufacturers that mainly produce accessories. One of the most popular (and most expensive) is the Metabones Smart Adapter mark IV but you can also find products from Fotodiox and Viltrox.

Then along came Sigma, a brand known for its high quality (and in some cases, unique) prime and zoom lenses. The MC-11 announcement surprised me at first since I was expecting to see some native full-frame E-mount lenses from the brand at some point. Instead, the Japanese company decided to release its own adapter designed exclusively for E-mount cameras.

Thinking about it, this solution was the fastest and cheapest that Sigma could have possibly come up with. The company already has an extensive range of DSLR products which get excellent reviews and are affordable. Why risk investing in a brand new lens series when a simple adapter could do the trick?

I was curious to test the Sigma MC-11 for multiple reasons. It is made by Sigma which hopefully means it can communicate better with lenses of the same brand. It offers complete compatibility with all the camera’s settings, can be updated via firmware and comes at a reasonable price. Is it the best AF adapter for Sony E-mount cameras? Let’s find out!

Note: The adapter exists in two versions: SA (Sigma mount) and EF (Canon mount). For this article I tested the EF version.

Gear used with the MC-11 for this review:

The build quality of the MC-11 is excellent. It is made of metal but is not weather sealed which would have been a welcome addition. The mount mechanism is solid and smooth on both sides, so mounting the adapter or the lens doesn’t require extra force.

The accessory includes a mini USB port to receive firmware updates via the Sigma Optimisation Pro software. This can be helpful to increase the compatibility with additional lenses or improve the performance of the adapter itself. There is however a second part to this story: several lenses require a firmware update too and for that you need the Sigma USB dock which is a separate accessory. Somehow it would have been great if Sigma had allowed you to use the adapter to update the lens directly, saving you $60.

That being said, the USB dock is useful not only to update firmware but also to customise settings on the lens. You can make micro adjustments for the AF focusing position or turn on the Full-time MF function. With certain lenses you can also customise the optical stabilisation view mode in the finder, change the distance of the focus limiter switch and assign settings to the customisation mode switch. For example, concerning the latter, I assigned position 1 to Fast AF priority (the focus point is reached as quickly as possible) and position 2 to Smooth AF priority (slower but smoother autofocus, which can be helpful for video) on the 150-600mm.

To help you understand if your adapter or lens needs a firmware update, Sigma included a LED light on the MC-11 near the unlock button. It illuminates for three seconds when you power on the camera. During those three seconds, the LED can display four different signals:

The idea of the LED light is great as it gives you a clear sign of where your combo stands. When I received the lenses, I noticed right away that a firmware update was needed for three lenses.

The adapter transmits all the necessary information to the camera including EXIF data. Distortion, chromatic aberration and vignetting are automatically corrected in the OOC JPG if you have the settings to Auto in the camera. In Lightroom you just need to select Sigma in the Brand drop-down menu and the correct lens profile is loaded automatically.

As of now, there are 15 Sigma DSLR lenses that are compatible with the adapter. I hope that the list will increase. Sigma doesn’t officially acknowledge compatibility with other EF lenses but several reviews have stated that the adapter also performs well with Canon lenses. Unfortunately I couldn’t verify this for myself.

The MC-11 makes your Sigma DSLR lens behave like an E-mount lens. What I mean is that unlike most adapters, all the AF settings are available including Zone Area, EyeAF and Lock-On. In fact you can’t select phase or contrast detection manually (the option is greyed out). The latter however poses some limitations in my opinion.

In Single-AF mode, the camera tends to select contrast detection and that causes the performance to slow down and produce back-and-forth movements of the internal elements while the camera tries to acquire the correct focus point. It is often slower than a native E-mount lens. If you switch to Continuous-AF, the camera starts to use the phase detection points and the correct focus distance is acquired much more quickly. I wish you could still select the autofocus type manually (like with other adapters) as I believe phase detection works better in both Single and Continuous AF.

Despite the slower performance in Single AF, the cameras never really struggled to acquire focus even with small AF points or indoors. The only really difficult scene I encountered was extreme backlit situations like the example below but that can be a challenge for native lenses as well. The performance can slow down considerably in low light if there isn’t enough contrast.

I found EyeAF accurate and fast to use. It is almost as good as using an E-mount lens. It only works in Continuous AF but I found it to be fast and reliable with static subjects. With moving subjects the results can be less accurate.

Lock-On AF works surprisingly well. The camera rarely loses track of the element it has locked onto, even when it goes outside the frame for a few seconds. It works in both Single and Continuous AF. Again with the latter, phase detection is used which increases the speed and accuracy. Occasionally the camera can lose its lock on the subject and reset but that is no different to E-mount lenses.

I already shared my experience for birds in flight (read the Red Kites article here) where I got an overall 50% keeper rate with the A7r II and 60% with the a6300, which I consider quite good.

However when the variation in speed and distance is more substantial, the camera has more difficulty with continuous AF and continuous shooting. During the Tonfanau motorbike race, the AF simply couldn’t follow the bikers exiting from a corner or coming in a straight line. It progressively loses the focus point. I got an average keeper rate of 30% with both cameras with the a6300 performing marginally better. I tested all the Area modes and tried different settings like Balanced Emphasis instead of AF priority but the results were always the same. The areas that work best are Zone and Expand Flexible spot.

If you “pause” the continuous shooting for a few moments or switch to single shooting mode, the AF is faster at keeping track of the subject. It is not ideal but it seems that high speed shooting slows down the Continuous AF performance severely. So there is a way to increase your keeper rate but for sports or wildlife, skipping continuous shooting at 5fps or higher can be a big limitation.

Stabilisation and performance for video

With lenses that lack OS, the A7r II, A7s II or A7 II will use the 5-axis in-body stabilisation and you can activate or de-activate it from the camera. It performs similarly to how it performs with E-mount lenses.

For video you will find the same options available for E-mount lenses including AF Track Sens and AF Drive Speed.

Overall the Continuous AF performance for video is not bad at all. The camera can change the focus point fast enough in many situations. With fast moving subjects, the a6300 is faster thanks to the more advanced AF system but the results won’t be perfect.

The only downside is that the lens makes a lot more noise in video mode which can be annoying if not problematic when you need to record audio too.

The Sigma MC-11 is an excellent adapter and perhaps the best option you can find for your Sony A7r II, A7 II or a6300 today. Being able to use Lock-On or Zone Area is very useful and I use these settings with native lenses all the time. The only adapter that comes close to this is the Metabones Mark IV but its costs double the Sigma.

The only limitation I find annoying is that you can’t force the camera to use phase detection points only. It selects which system to use automatically (like with E-mount lenses) and can slow down the speed in Single AF where the camera seems to prefer contrast detection.

For the rest, I can write the same thoughts I would write for any adapter: it makes sense up to a certain point. Yes, you can use lenses that are not available in native E-mount for now such as extreme telephoto lenses. Yes, you can use some unique lenses like the 18-35mm f/1.8 Art that only Sigma produces. I won’t deny there are advantages. But these lenses can also make the camera-lens combo much heavier and more unbalanced.

In the end, it is a solution: not the best but at least you have one if you already own these lenses and want to keep using them or if you need them while waiting for Sony to release an equivalent. I think that among all the adapters available, this is definitely the one to consider right now (for Sigma lenses especially): it is one of the most complete solutions with a reasonable price tag. I hope Sigma will bring compatibility with more lenses in the future.