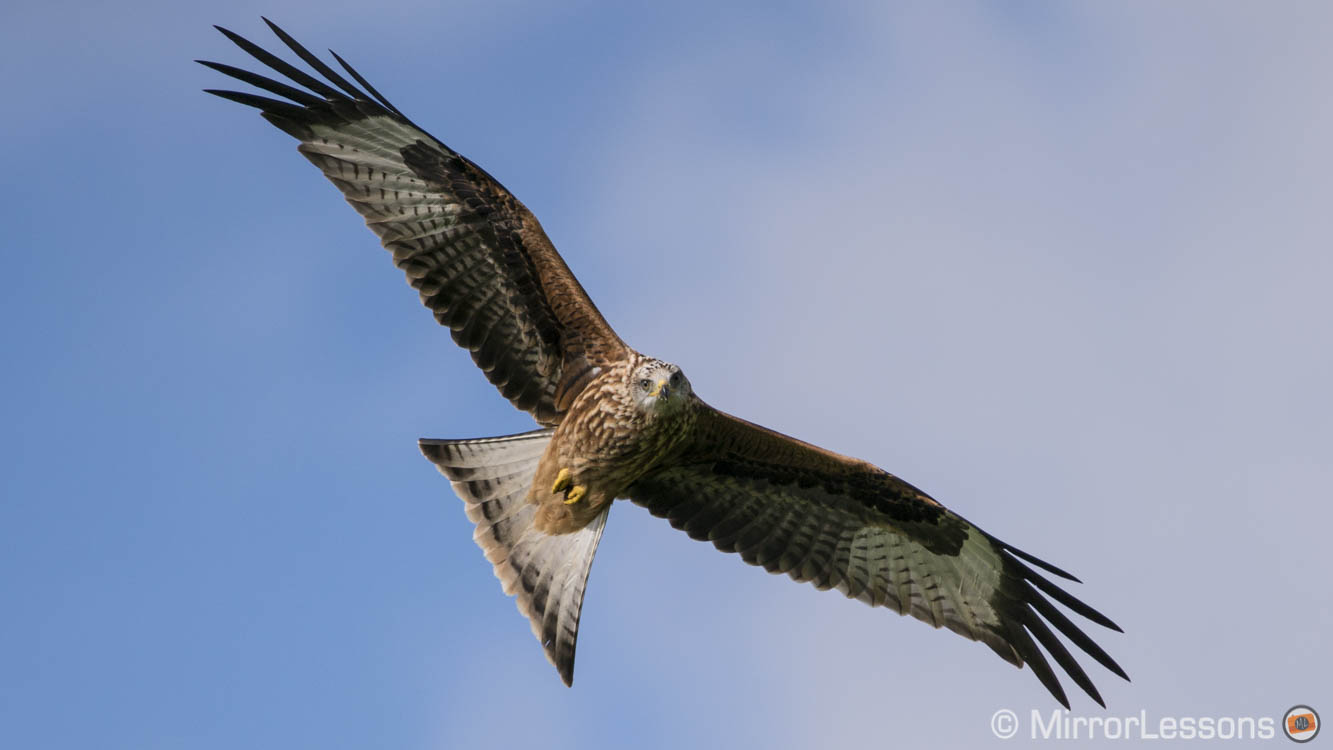 There is a farm in Mid-Wales called Gigrin where more than 300 red kites are fed everyday by a member of the family-run business. The birds, with a wingspan of 1.8 metres, battle not only with one another but also against crows, ravens and buzzards for the best pieces of meat. We even saw a cat sneaking onto the field to steal a chunk for dinner. While observing all this (and it is fascinating to watch), we took the opportunity to push the Sony A7r mark II’s autofocus capabilities to the extreme by mounting the Sigma 150-600mm f/5-6.3 Contemporary (Canon EF mount) and the Metabones Mark IV adapter to take some shots of the birds in action.

The feeding happens at 3 p.m. every day (2 p.m. during the winter). We arrived there one hour early to have the time to choose the best spot inside one of the several hides designed for observers. There is even a two-story building for photographers but it is quite expensive to use. As 3 o’clock draws near, the place fills with tourists and holiday-makers eager to watch the show. 10 minutes before supper-time, you start to see the kites flying around the trees while the crows take their place on the ground.

The farmer arrives at 3 p.m. on the dot with a tractor full of chopped-up meat and flings it onto the ground with the help of large shovel. Once the first pieces of food hit the ground, a small number of daring kites dive down and grab their fill. Most of them, however, wait for the crows to go first, as it is a confirmation that everything is safe. Then the kites start to fly in circles, awaiting their chance to furl their wings, dive in and grab the food.

Yesterday was a mix of intermittent rain and sun. The kites don’t like to fly in the rain, so while they waited for it to stop, they enjoyed a brief respite in the nearby trees. What is interesting is that when this happens, the crows also step back politely and wait on the ground. It almost looks like a gesture of respect towards the kites, as if they are saying, “If you wait, I’ll wait, so that we can have a fair fight for the food.”

As the rain abated, a sneaky black and white cat cautiously walked toward a pile of red meat and grabbed one piece for himself before the birds started to populate the ground again. The cat definitely knows that the feeding happens every day. We noticed him waiting patiently under a bush before the farmer came in.

When the rain stopped, the crows were on the ground again and soon enough, the kites slowly left the tree for a second round. This whole process of eating/waiting/eating again happened a few times due to the bands of rain that continued to pass over the farm. Around 4 o’clock, most visitors that had come to watch the feeding had left, thinking that the larger birds wouldn’t bother anymore. But there was still a lot of meat on the ground. Heather, myself and another photographer in the photographer’s hide opted to stay and wait patiently. At 4.30 p.m., the final round began and the 300 kites dove in for the last morsels of food. Once they were gone, the crows and ravens cleaned up what was left and flew away as well.

I have very little experience photographing birds and of course I found it quite difficult at the beginning. The best way is to follow a single kite instead of trying to randomly capture them when they grab the meat on the ground. Their movements are so fast, which is fascinating to watch but extremely difficult to photograph. Also, when it is cloudy and rainy, you have to raise the ISO to 800 to maintain a decent shutter speed. (Even 1/1000s is not enough to be safe from motion blur.) From the hides, 300mm or 400mm can be enough to catch a good photo and the Sigma lens gave me lots of versatility. However, being inexperienced meant that I felt the need to use a shorter focal length many times to be able to effectively follow the birds. For this reason, I cropped some of the shots you see here (it’s indicated in the caption when applicable).

Today we came back to Gigrin Farm to photograph the event a second time. Knowing exactly what was going to happen this time around gave me more reassurance. What’s more, there was more sunlight which made it easier to deal with the exposure. I actually raised the Auto ISO to a limit of 1600 and used a faster shutter speed to reduce the chance of motion blur.

Now how about the A7r II’s performance? All things considered: it is excellent.

There is of course much more testing to be done to discover whether this camera performs well with every DSLR lens out there. After all, there are so many variables (the camera, the lens specs and the adapter) that can affect your results. There is also another factor to consider, which is the real-world relevance of adapting lenses. Personally, I am interested in adapting lenses that a) aren’t overly disproportionate to the size of the camera, or B) give me something that the native Sony FE lenses don’t yet (like a 150-600mm zoom).

When using non-Sony lenses, there are a few settings that are not available including Zone AF and Lock-On AF (3D Tracking). The best setting I found for this kind of photography was Continuous AF and either the largest Flexible AF point or the Wide AF mode. One thing I noticed with the Flexible AF point is that it works really well as long as you keep it at the centre of the frame. If you move it to the left or right, even within the phase detection area (you can activate the guidelines to see it on the display), the camera will have a hard time focusing and will keep moving the lens elements back and forth.

With Wide AF the camera detects and tracks the birds very well and has a vaster range of AF points available than just the limited area of the Single point. The tracking capabilities are stunning – only a few times did the camera focus on the trees in the background instead of the birds. Perhaps the best example is this picture below: the bird is far off in the background, yet the camera kept tracking it. The small and copious phase detection points (399 in total) are very effective. However, keep in mind that in this article I am showing my best shots; many of them were slightly out of focus so it is not always accurate.

It is also important to choose Phase Detection AF instead of Contrast AF in the Menu (this option is available with all non-native FE lenses). Also, be sure to set Focus priority to AF instead of Speed or Emphasis to ensure constant results. The A7r II can shoot at a maximum of 5fps (also in C-AF) but I admit the burst can be limiting for this kind of photography. It is not just a matter of how many frames per second you can capture – since the burst affects the view in the EVF, the delay makes it more difficult to keep track the bird while shooting. 8 or 9fps would definitely improve this. I wish you could select a lower resolution for both Raw and JPG formats and increase the shooting speed (the APS-C crop mode only goes up to 5fps).

The EVF itself is not bad. Its large size and 0.78x magnification help a lot and the time lag is reasonable. For the best performance you need to set it to “high performance”.

Finally, for some shots, especially the one of the birds in the sky, I took advantage of the APS-C crop mode. It gives you an 18MP Raw file which is still a more-than-decent resolution and you get that extra reach.

I’ve used two adapters with this lens so far. The first was the Fotodiox Pro at the Race the Train marathon. The number of in-focus images I achieved was surprisingly high but the adapter has lots of bugs and issues. It causes the camera to unexpectedly quit the menu or a setting you are trying to change despite not pressing a button. In manual mode, it can change the exposure without you altering the shutter speed or aperture, and other times the shutter will remain closed and you have to turn the camera off and on again to get it to work. In a few words, it can’t be trusted despite the fact that you can take good shots with it. I get the feeling that it is just a matter of updating the adapter for the A7r II but unfortunately Fotodiox hasn’t firmware updates for its products.

On the other hand, the Metabones Mark IV allows for firmware updates (it has a USB port). When I received the sample, the lens autofocus wasn’t working but it was just a matter of updating the adapter to the latest version. The only issue I found with this lens is that if you activate the optical stabilisation (1 or 2) the camera switches to Manual Focus after a few seconds. The only way to go back to AF is to turn off the camera and the OS on the lens. It is also very expensive and doesn’t work with all Sigma lenses. However, many Sigma lenses also come in an A-mount version. These would be my first choice to use on the A7r II with the LA-EA3 adapter.

What about the Sigma 150-600mm Contemporary lens?

I find it really excellent. Of course I’ve never tried it on a Canon or Nikon DSLR so I can’t compare the performance but seeing what I got with the A7r mark II, I think it is a great investment especially considering the reasonable price. The sharpness is good at 600mm and f/6.3 (with a little bit of vignetting) and it is a great lens to begin with before considering larger, more expensive offerings. Note that there is also a version of this lens called Sport. It is larger, heavier with a stronger and weather sealed built and of course more expensive.

Photographing kites was probably the toughest test I could have given the A7r II but it performed beyond my expectations, and I couldn’t be more excited to test it with even more non-native lenses.

Make sure to follow us for more galleries and articles about the Sony A7r II! In the meantime, you can also check out our low light gallery with images taken at the Lantern Festival.