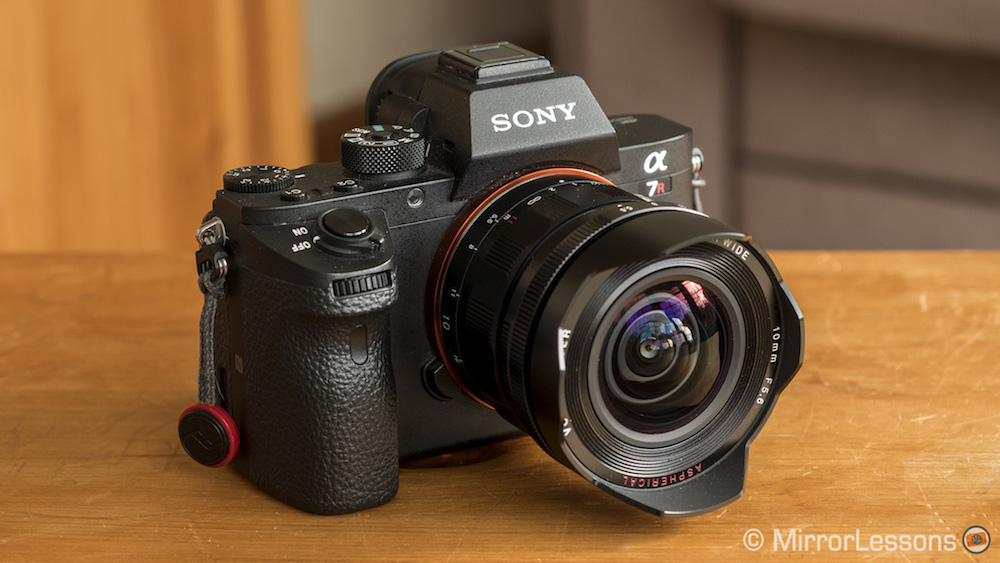 For the past couple of weeks, we’ve had the pleasure of testing the three new Voigtlander Heliar lenses for the Sony E-mount on our A7r II (review here). I love the challenge of working with extreme wide-angles and having read very positive reviews of the M-mount versions of these lenses, I couldn’t wait to try them out for myself on the landscapes and architectural marvels in our little corner of Wales.

The first review deals with widest of the three, the 10mm f/5.6 Hyper Wide Heliar, which is the only lens we can actually call “new” because the M-mount version was released at the same time as the E-mount version. (M-mount versions of the 12mm and 15mm, on the other hand, have been around for many years.) It is also the widest rectilinear lens ever produced.

Constructed from solid metal, the 10mm features 13 elements in 10 groups with 10 aperture blades, a minimum focus distance of 30cm and an aperture range of 5.6 to 22.

Surrounding the convex front element is a non-detachable petal-shaped lens hood to which you can attach a pressure fit cap to keep the lens covered when not in use. The hood, along with the optical design of the lens, does an excellent job of mitigating flare but it isn’t large enough to protect the front element from bumps and scratches.

Due to the extreme angle of view and the lack of a filter thread, you cannot attach conventional screw-in filters to the lens. However, according to PhillipReeve.net, a lens-specific holder from NiSi Filters should be hitting stores soon.

Weighing 375g and measuring 68.5mm from mount to tip, it is the perfect size for both the A7 and a6000 cameras. It is also more or less the same diameter as the E-mount itself, which is a characteristic shared by the Zeiss Loxia lenses as well (review here).

The barrel features a marked aperture ring that can be clicked or de-clicked with a second ring just next to it depending on whether you are shooting stills or video. Though I didn’t shoot any video with this particular lens, I’ve used this selective aperture control system before on other Voigtlander lenses for Micro Four Thirds and it works seamlessly.

There is also a depth of field / distance scale to help you focus manually, though for the most precise results for landscapes and architecture, I recommend using the distance scale in combination with the Sony’s magnification assist.

Being a native E-mount lens with electronic contacts, EXIF data is communicated to the camera, as is information about 5-axis stabilisation, auto-lens correction, manual focus assists and focus distance settings.

Through the lens – Optical Quality

First, let’s talk about the sharpness of the lens. From my samples taken at close to infinity, it appears that sharpness in the centre is fairly consistent between f/5.6 and f/11 with the best performance found at f/5.6 – f/8. Diffraction begins to appear at f/16 and is clearly visible by f/22, which is normal for any lens.

Turning to the corners, we notice that they are significantly softer than the centre of the frame, with the best results appearing at f/8 and f/11.

In short, the 10mm gives you the best performance around f/8 if you want excellent sharpness at the centre and decent sharpness in the corners. The only value I’d consider unusable is f/22, while f/16 can be used at a push. Overall I found it capable of delivering very good (though not extraordinary) results when matched with the 42MP of the A7r II.

Because of the slow maximum aperture, it is difficult to achieve any sort of shallow depth of field unless you get extremely close to your subject, but moving too close can result in excessive distortion caused by the extreme wide-angle.

Being a rectilinear 10mm lens, perspective distortion can be quite pronounced at the edges in that the corners appear stretched. The amount will vary depending on your composition and orientation. It is the main characteristic of this lens and when used effectively, can help you to create unique and captivating compositions.

As for barrel distortion, it is negligible and can be easily corrected with the lens profile in Lightroom.

As I mentioned in the design section, flare is rarely an issue with this lens, so much that in all my test shots, it only appeared twice in direct sunlight in the form of very small colourful shapes. This is a big point in the 10mm’s favour, as it means you can do landscape work without the fear of flare running your image.

There is, however, noticeable vignetting through the aperture range and some signs of purple fringing, particularly near the edges of the frame. The best way to correct the former is by applying the dedicated lens correction profile in Lightroom which just recently became available, while the latter can be reduced with the “Remove Chromatic Aberration” tool.

Vignetting: Before and after

A wonderful characteristic of this lens, and the two other wide-angle Voigtlanders, is its beautifully-formed sunstar flare. They add an artistic touch, not only to images featuring the sun but also low-light or indoor locations with artificial lights as you can see from the image below taken inside a pub.

Before sending the lens back to Flaghead, I managed to take a few quick shots with the 10mm f/5.6 on our a6300, just to see what kind of results I would get. Due to the sensor crop, the 10mm gives you the same field of view as a 15mm for full-frame cameras, which is still a very wide lens for landscapes and architecture.

As you can see from the sample image below, the main advantage you gain from using the 10mm on the a6300 is that much of the vignetting and corner/edge softness is essentially cropped out of the image.

Whereas standard lenses are often used to tell a story through an action or situation, extreme wide-angles such as the 10mm tend to communicate visual interest to the viewer through leading lines and shapes. Indeed, a seemingly mundane scene shot with a 35mm lens can take on a whole new meaning when seen through an extreme wide-angle.

However, the fact that the 10mm is so wide also means that it isn’t very forgiving, and you may find that it takes some time before your artistic eye adjusts to its wildly unnatural perspective. Achieving the right composition in-camera with the correct alignment and leveling becomes more important than ever, as even a minor crop to adjust the horizon or remove unwanted elements at the edge of the frame will result in compositional imbalance.

Despite these small hurdles, the Voigtlander 10mm f/5.6 is an extremely fun lens to use if you are a wide-angle enthusiast and can provide great satisfaction if you take the time to create the perfect composition.

What I like about the Voigtlander 10mm f/5.6 Hyper Wide Heliar

What I don’t like about the Voigtlander 10mm f/5.6 Hyper Wide Heliar