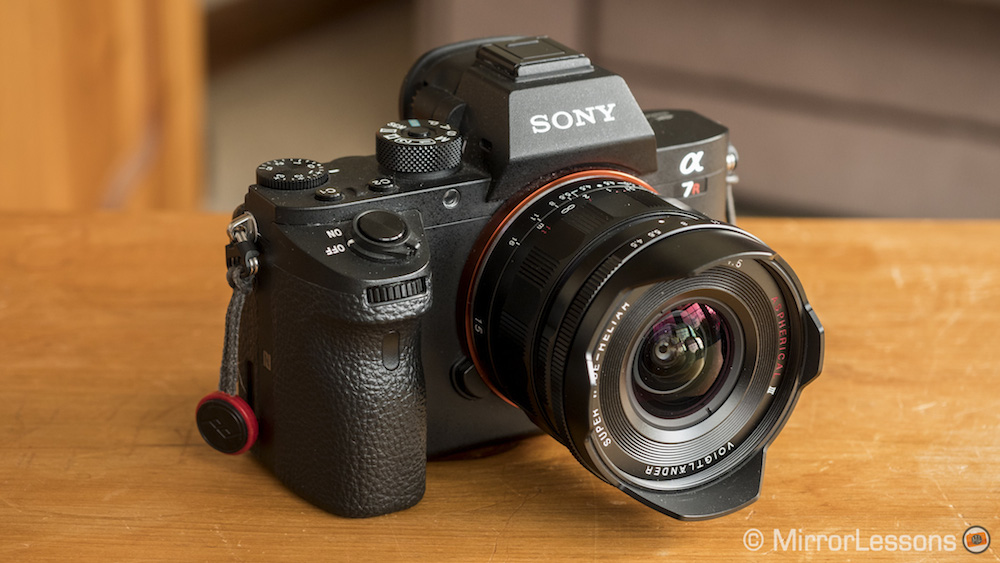 The second lens in the Voigtlander trio is also the narrowest of the three – if you can call 15mm narrow! This wide-angle lens, originally designed for the Leica M-mount and later updated for native use on Sony E-mount cameras, shares quite a few characteristics with the 10mm I reviewed last week, so don’t be alarmed if you begin to experience some deja-vu. 😉

Were it not for the barrel markings, it would be somewhat difficult to tell the 15mm apart from the two other Voigtlanders. However, a side-by-side comparison quickly reveals that it is the smallest of the three at 62.3mm in height (but only the second lightest after the 12mm). Like its siblings, it is the perfect size and weight for any of Sony’s E-mount cameras, both full-frame and APS-C.

All three have a solid black all-metal barrel with a smooth focusing ring, distance scale, depth of field scale, and an aperture ring that de-clicks when you push the aperture control ring forward and turn it 180 degrees.

While the distance / depth of field scales of this lens give you a rough idea of your focus distance, I always find it best to enrol the help of Sony’s magnification assist to achieve perfect focus.

Also common to all three is the built-in petal-shaped lens hood. It does an excellent job of mitigating flare but isn’t large enough to protect the front element from objects smashing into it.

The 15mm is also the only lens of the three to come with a clip cap instead of a pressure fit cap for the same reason mentioned above.

Finally, it is the lens with the fastest maximum aperture: f/4.5 rather than f/5.6. This means you can achieve a little more shallow depth of field when focusing at their common minimum focus distance of 30cm and work in slightly poorer light conditions.

None of the lenses are weather-sealed but thanks to their electronic contacts, all three can communicate EXIF, focus distance, 5-axis stabilisation, manual focus, and lens correction information to E-mount cameras.

Through the lens – Optical quality

For someone who is unfamiliar with wide-angle lenses, the 15mm is probably the easiest to use of the three since its field of view, while extreme, doesn’t exaggerate perspective quite as much as the 10mm or 12mm.

Looking at a set of 100% crops taken from the centre, we can see that sharpness is consistently good from the fastest aperture of f/4.5 up to f/11 with the best performance occurring at around f/5.6.

In both the corners and at the centre, f/22 should be avoided due to diffraction while f/16 remains useable in a pinch.

Distortion is also normal for a wide-angle lens such as this. The stretched appearance of the corners is the result of perspective distortion, which becomes more exaggerated if you tilt the lens up or down. The very minor barrel distortion can be corrected by applying the dedicated lens profile in Lightroom.

The only reason to talk about flare is to reference its almost complete absence. In all my sample images, some of which were taken into bright sources of light, I only encountered a few very minor examples. The same can be said about the 10mm and 12mm as well.

However, where flare is missing, vignetting is abound regardless of the aperture you use. The good news is that it can easily be fixed by applying the dedicated lens profile in Lightroom which recently became available.

Happily, I didn’t come across many relevant examples of chromatic aberration except for some minor purple fringing in backlit situations, so it appears that resistance is very good. Below you can see the worst example I came across during my testing period.

The lens also produces very beautiful sunstar flares, which is a characteristic all three lenses share.

Finally, of all the Voigtlander lenses, the 15mm is the one with which you can get the most shallow depth of field by focusing at its minimum focus distance of 30cm. However, as you can see in the shot below, the depth of field is still very deep.

Luckily, I was also able to try out the lens for astrophotography on a very dark night here in Wales. Though the focal length is ideal for this genre, the fastest aperture of f/4.5 is a little slow, so I had to use an ISO value of 6400 and a shutter speed of around 10s to obtain decent results. Looking at the edges and corners, there is some coma at f/4.5 but it isn’t too bad.

On the evening before sending the lenses back to Flaghead, I was able to briefly use try out the 15mm on our Sony a6300. Due to the crop factor, the 15mm gives you the same field of view as a 22.5mm on a full-frame camera, which is still a fairly wide lens for landscapes and architecture.

As with the 10mm, the biggest advantage of using the 15mm on the a6300 is that it crops out some of the softness and vignetting in the corners.

While I enjoyed using the extreme angles of view afforded by the 10mm and 12mm, I have to say that I found the 15mm the easiest to use as an all-in-one solution for landscape, architectural, cityscape and street photography. Its focal length is far more forgiving and the slightly faster aperture can come in handy in less-than-ideal light conditions.

Also advantageous for landscape photographers in particular is the fact that it accepts filters directly via a filter thread, whereas with the 10mm and 12mm, a third-party filter adapter is required.

Even though I adore the wild perspective of the 10mm and 12mm, were I actually faced with the decision to buy one of these lenses, logic would push me in the direction of the 15mm because I know I’d get much more use out of it.

What I like about the Voigtlander 15mm f/5.6 Hyper Wide Heliar

What I don’t like about the Voigtlander 15mm f/5.6 Hyper Wide Heliar