You are here: Home / Fuji Camera Reviews / A weekend with the Fuji X-Pro 1: first impressions and thoughts about the Fuji X system 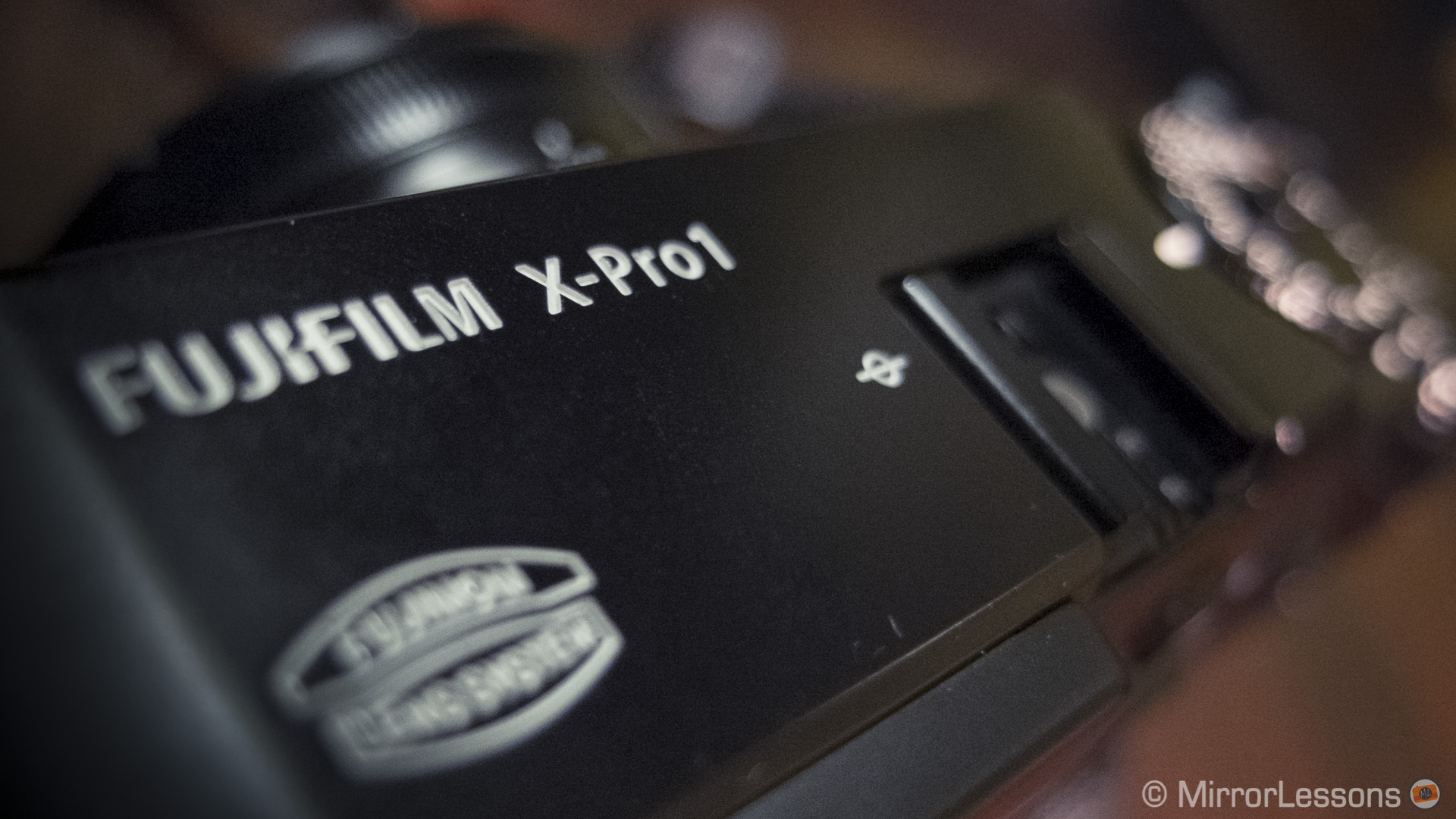 Update: now you can check out the complete review about the X-Pro 1!

Since a few days isn’t enough time to write a review with a capital “R”, I thought it would be more interesting to share my initial thoughts about the camera and the X system in general. The Fuji X-Pro 1 is one of the cameras that has deeply captured my interest since its release, and now that I’ve had the chance to test it, I’m trying to figure out if it is a system that I could embrace for my personal projects or work.

I had the chance to play around with it two weekends ago. Heather and I went to Genova in the Liguria region, chasing the sun, as the weather is very unpredictable these days in northern Italy. Luckily for us, the day was wonderful and I was able test the camera along many of the small streets of the old city, as well as along the Costa Ligure.

Genova is a very interesting city to photograph: the old part of town consists of very small and narrow streets that create contrasted scenes where shadows are sliced in half. An inspiring way to begin my photographic day.

What I liked about the Fuji X-Pro 1: minimalistic and easy to use

My initial feeling when holding the X Pro 1 for the first time was actually strange, because I found it bigger than I had expected. After several years of DSLR shooting, I shouldn’t have been surprised, but at the same time I had become so used to the small size of the Olympus OM-D and the Fuji X100s that all of a sudden, the X-Pro 1 looked like a big camera to me! But it only took a few hours to get used to it, and to realize it isn’t that big in the end.

The size, the design, and the “philosophy” behind it clearly reminds me of another camera, the Leica M series. It is clear to me that Fujifilm wants to offer a professional system in a smaller and cheaper package without compromise in terms of sensor and lens quality. Of course, there are many differences between the two systems and since I am not a Leica expert, I won’t go in that direction. For me, it is enough to say that the “Pro” term used to name this camera is substantiated by the camera itself: it is solid, feels nice and steady in my hand, and has an all metal build. From the first test shots after unboxing the camera, you recognize that this camera exudes quality … and isn’t half bad to look at as well!

The X Pro 1 design is very minimalistic, discreet, and I would say anonymous. You will need an expert eye to recognize it on the street. It’s an aspect that I really appreciate. Like other Fuji cameras, the buttons are very well placed and the camera is really simple to use. The menu is intuitive, and the Q button very helpful.

For me, its strongest point is the hybrid viewfinder, a feature that I am already enjoying on my X100s. I like using the OVF as it gives me the same brightness that I am used to with DSLRs. Of course, there is the infamous parallax issue of which you’ll need to be aware. You can enable the corrected AF frame in the viewfinder that will also give you a corrected frame area, but the longer focal length you use, the less precise it will be especially if you are shooting a close subject. In some cases, it is better to switch to the EVF. Like the X100/X100s, the viewfinder selector is really nice and quick to use, even though I prefer the X100s version, as it is slightly bigger and easier to access with your finger. Also, the X100s’ version is facing upwards, which I find better. (Yes, that was my picky sentence of the article!)

What I liked about the Fuji X-Pro 1: great lenses and amazing image quality

Another strong point in favour of the X Pro 1 is the Fuji X lenses. I knew that they were good but I was still surprised by how they performed. I had the 18mm f/2 and the 35mm f/1.4 with me. The first is a nice wide angle lens which is surprisingly compact (if you remove the lens hood, it looks almost like a pancake lens). It is sharp at its fastest aperture, very sharp at the middle aperture, with acceptable distortion and good flare resistance. It’s not my favorite focal length for a wide angle: a 28mm equivalent on 35mm format, which is not wide enough for me in most cases. As such, I didn’t really fall in love with the lens.

The 35mm f/1.4 on the other hand is probably the best normal lens I’ve every tried (50mm equivalent on 35mm format). Super bokeh, very sharp even at f/1.4 – that lens really impressed me.

The only con I found while using these two lenses is that the aperture ring (yes, a true traditional aperture ring) is too smooth. I ended up changing my aperture inadvertently more than once.

Then of course, there is the X-Trans sensor. After trying the X20, X100s and now the X-Pro 1, I can really say that it is the most interesting sensor I’ve tried so far in the mirrorless market. I really believe it can stand up against DSLR sensors too. The colours and tonal range are fantastically reproduced, especially in JPG format thanks to the unique look of Fuji’s film simulation modes. With the RAW file, you can work with a fantastic dynamic range.

The metering system is also very precised: I uploaded a lot of pictures to this article using the JPGs recorded on-camera as they were very balanced between shadows and highlights, execpt the first at the beginning, where the superior amount of shadows required some work with the RAW files to achieve a better result.

Below are a couple of shots taken at high ISO inside a church in Turin, during my second and last day with the camera. The low light performance of the camera is without a doubt one of its strongest points.

What I didn’t like about the Fuji X-Pro 1: Autofocus and battery life

There are two things that Fujiflm needs to improve. First, the autofocus is a weak point in most Fuji cameras. I didn’t find it disastrous as some others have suggested, but the main problem for me is the same as the one I have with my X100s: it isn’t reliable. Sometimes, I check a picture and realize that the camera totally missed the focus even though the confirmation appeared in the OVF/EVF. Not being able to trust the autofocus system is a problem in situations where you don’t have the luxury of re-taking the same shot. Fujifilm has already released firmware updates to fix the problem but I think they need to introduce an upgraded model with phase detection AF like the X100s, which isn’t perfect as I stated before but it’s still faster than the X-Pro 1. The AF improves slightly if you use the EVF instead of the OVF, but there is still work to do. That being said, Fujfilm has already made improvements and is moving in the right direction. I am sure that the next model will be faster and 100% reliable.

The second aspect is battery life. My battery on the X-Pro 1 was dead at 6:30 p.m. and I’d only started using it around noon, with around 200 shots taken. It’s not enough – not for me, at least. I bought a second battery for my X100s, and I can only encourage potential X-Pro 1 users to do the same.

Embracing a new system: Is it worth the change?

Buying a new system necessitates a number of changes: new lenses, new accessories, and a new way of shooting. It isn’t an investment to take lightly, and you have to be sure of why you want it. It is a personal choice, so I tried to think of the reasons that would convince me to switch to or implement the X system into my work.

For me, the first reason is the same as that which pushed me to build this blog with my partner and love of my life Heather: I enjoy using mirrorless cameras, both for personal projects and for work. I enjoy the possibility of using smaller bodies/lenses that still give me amazing quality. I feel I have a better approach to photography with a mirrorless camera in my hands, and it is also a way to differentiate myself from others. As of now, I would use the X interchangeable system for two things: landscapes and portraits.

The lenses available are still few in number, but more are coming (check out my recent hands-on with the new XF 55-200 f/3.5-4.8 zoom) and that’s why I could (finances providing) gravitate towards it next year when there is more choice. I say landscapes because of those great Fuji colours, and portraits for the same reason, because I see skin tone potential, and because the RAW files are very rich and offer great versatility.

It is a portable system with no compromise in terms of quality for both the sensor and lenses. Purely in terms of image quality, it is currently the best alternative to DSLRs, but the system is still too young to compete with them as of yet. Just give it a few years, and the playing field could consist of DSLRs, Micro Four Thirds and Fuji X!

X Pro-1 vs X-E1: does the hybrid viewfinder make a difference?

I only briefly held the X-E1 so of course I cannot make a fair comparison. The X-E1 is slightly smaller and has only an EVF. Since I like the hybrid viewfinder and think it is one of the most interesting aspects of Fuji’s cameras, that one difference is worth the investment. However, if you are on a budget, the X-E1 is no compromise as the sensor is exactly the same.

Well, I already own the X100s and this is partially the reason why I won’t invest in a X-Pro 1 right now. The X100s is a very well balanced camera, despite its fixed prime lens. I am actually using it more than I had expected, even for work. An upgrade to the X-Pro 1 would mainly be for professional reasons, but right now I cannot justify the expense. Once again, the lenses I am more interested in have yet to be released. I also think that the X100s is the perfect second/back-up body if you already own a Fuji X-Pro 1 or an X-E1.