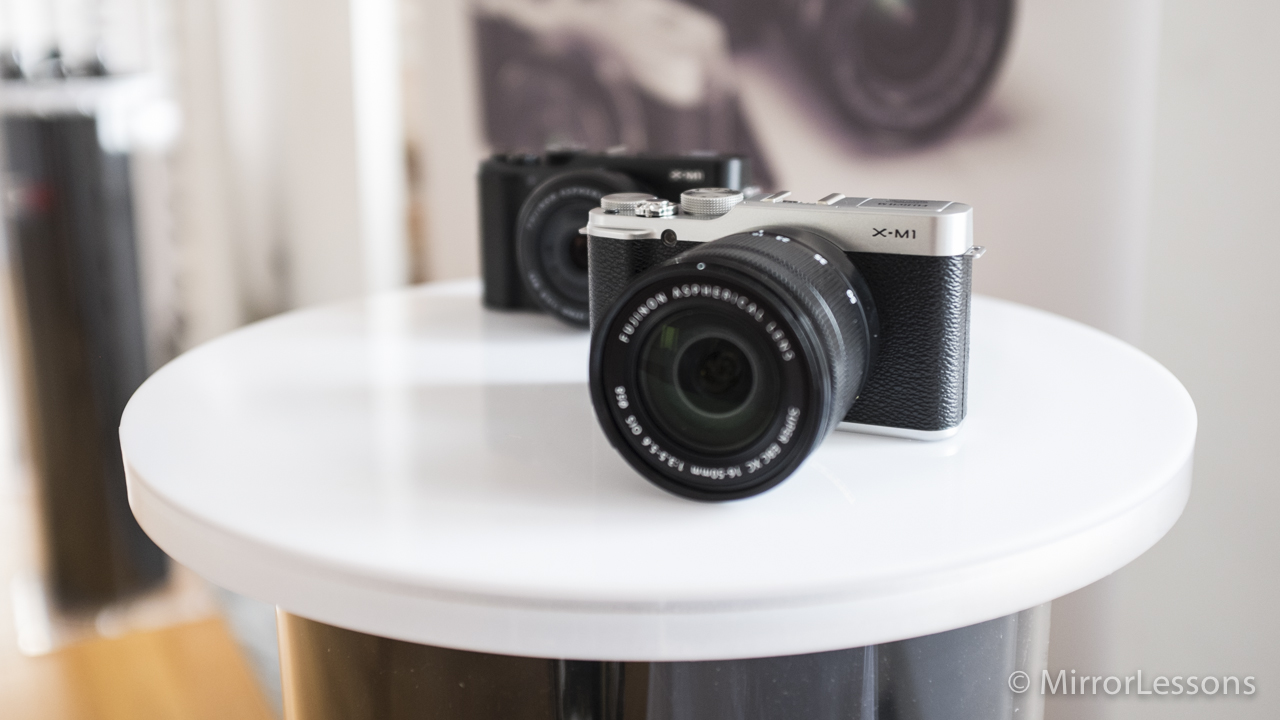 Though spending an entire afternoon at a press conference may not be everyone’s cup of tea, I was more than pleased to have received an invitation to the Fujifilm Italia Press Conference held in honour of the release of their new interchangeable lens camera, the Fuji X-M1.

Not only was it an opportunity to meet and greet other Fujifilm professionals such as Fuji X Photographer Max Angeloni of Riflessi Fotografici and Giulia Torra, an aspiring young photographer from Alessandria, but it was also a chance to get some one-on-one time with the X-M1, of which numerous trial models were on display for journalists, bloggers and enthusiasts to handle.

Anxious to escape the ferocious hail storm that was raging through Milan at the time, I plunged into the conference room a half an hour early, where I was kindly greeted by the organisers of the event. As if by fate, they invited me to try out the X-M1 while I waited. For about 20 minutes, it was just me, the X-M1, and a rather deserted conference room.

The first thing I noticed was that, while compact, it has an extremely ergonomic build. Though it is about the same size as the X20, I actually found it more comfortable to hold, perhaps due to its slightly chunkier build.

The placement of the dials is reminiscent of a low-end DSLR. It has a mode dial on the top stocked with a variety of useful modes for beginners, as well as a dedicated exposure compensation dial which may also function as a shutter speed dial in manual mode. Sandwiched in between these two dials is the shutter button, which is encircled by the on/off toggle.

On the rear, you’ll find a large tilt LCD screen on the left, and the sub-command dial, playback button, movie button, Q menu, and Display/Back button on the right. Above these controls, you’ll also find a dedicated aperture toggle. According to Fujifilm, positioning all the controls on the right-hand side of the camera allows for easy one-handed manipulation of the camera.

Overall, I feel that the X-M1 has achieved perfection in terms of design and layout. Professionals who are already familiar with DSLR controls will feel at home with the X-M1’s design, and amateurs looking to take a step-up should not have any trouble learning the most important manual controls thanks to the X-M1’s easy-to-use layout and system.

Speaking of professionals and amateurs, one point Fujifilm made during the presentation was that the camera has been designed for amateurs aspiring to become better photographers. However, having used the camera myself (albeit for only 20 minutes), I believe that it could also work as a compact second body for professionals. It has all the manual controls one could desire, it certainly looks professional (and dare I say sexy?), and produces the image quality you’d achieve with an X-Pro1. While it may not perform to standard for every kind of professional assignment, it could make a wonderful holiday or day-to-day camera for the advanced users out there.

ISO performance was another aspect that impressed me about the X-M1. The camera can reach a maximum native ISO of 6400, and an extended ISO of 25600 at a reduced resolution. In the conference room, I found that 3200 and 6400 ISO were perfectly sufficient, producing clean-looking images that I wouldn’t have any qualms about printing or sharing with a client.

Another positive about this camera is that its EXR Processor II has given it speed. It can shoot at a maixmum burst speed of 5.6 fps with a lag of only 0.05 seconds between each shot. I tried it myself, and while not quite as zippy as the X20, it could definitely capture a bicycle or car racing by without any problem. Sadly (or perhaps fortuitously?), there weren’t any fast-moving objects in the conference room, so I don’t have any pictures to support my words – my apologies!

Moreover, it also has a silent shutter – once again, not as silent as the X20, but enough that you wouldn’t disturb anyone during a conference or theatrical performance, for example.

The final compliment I want to give Fuji is, of course, is the amazement I continue to have every time I see the colours produced by the X-Trans sensor. The sensor found in the X-M1 is actually the first generation, the same as that found in the X-Pro1, whereas the second generation can be found in the X20 and X100s. (This was probably done to keep the cost down.) Still, the colours are gorgeous, and I regret the fact that the weather was so bleak and dreary on the day of the conference. On a sunny day, the colours would have been ten times more vibrant.

So, is there anything wrong with this camera?

Having only used it for a short period of time, I hesitate to cast judgement, but it appears that the autofocus is still not as good as it could be. Coming from the Olympus OM-D E-M5 and Pen E-P5, I am used to lightning-fast AF, and anything less comes across as sluggish to me.

This said, it seems a slight improvement in AF speed has been made over the X20 and the X100s. It quickly locked on to any well-lit subject outside, as well as any subject located at a distance from the camera. However, when it came to close-up and macro shooting, I found that the AF would often struggle, especially when I tried to place the focus on darkly-coloured subjects. (N.B. I was using the 27mm the entire time. Perhaps with a proper macro lens, we would see an improved performance.) The AF also lost some of its speed in poorly-lit situations.

Below, you can see two situations in which the AF took its sweet time to bring the subject into focus. The first is a set of three darkly-coloured Fujinon lenses. It took over twenty tries to get the AF to lock. In the case of the flower, I was able to lock onto it quite quickly if I stood 20 cm away from it. Any closer than that, and the AF would refuse to lock.

As you can see, the AF didn’t have any problems locking onto objects in the light of day.

A few things I didn’t have the opportunity to try were the Wi-Fi connectivity (for obvious reasons) and focus peaking (it slipped my mind). Seeing that most camera Wi-Fi connections tend to be a bit fiddly to say the least, I will be curious to see just how practical it is when we are sent a test model of our own.

In conclusion, I can’t help but feel that Fujifilm is moving in the right direction with this camera. It is a very approachable and “friendly” piece of machinery, even for those who have little experience in the world of digital photography.

All the X-M1 images you see on this page were taken with the brand new 27mm f/2.8 attached. It is a prime pancake lens which delivers a field of view similar to that of the human eye, and is the smallest XF lens in the series. In fact, it is so small that there is no room for an aperture ring, meaning that X-Pro1 owners will have to update their camera with the latest firmware to allow aperture setting from the control dials located on the rear.

It also has the fastest AF response “amongst single focal length lenses on APS-sensor mirrorless cameras” (DPreview). This may explain why the X-M1’s autofocus gave me the impression of being slightly faster than that of the X20 and X100s.

From what I can tell, the images produced by the lens are clean and crisp, and it produces a very nice bokeh for up-close shots. The lens itself is lightweight despite being made of metal, and is unobtrusive thanks to its compact size.

Finally, here are a few more photos from the conference which don’t really belong anywhere else. I would like to send out my warm thanks to Anna and Matilde of Fujifilm Italia for inviting me to the event, and I look forward to attending the next one!