You are here: Home / Reviews / A Family Day in Llandudno: First impressions of the Sony RX100M2 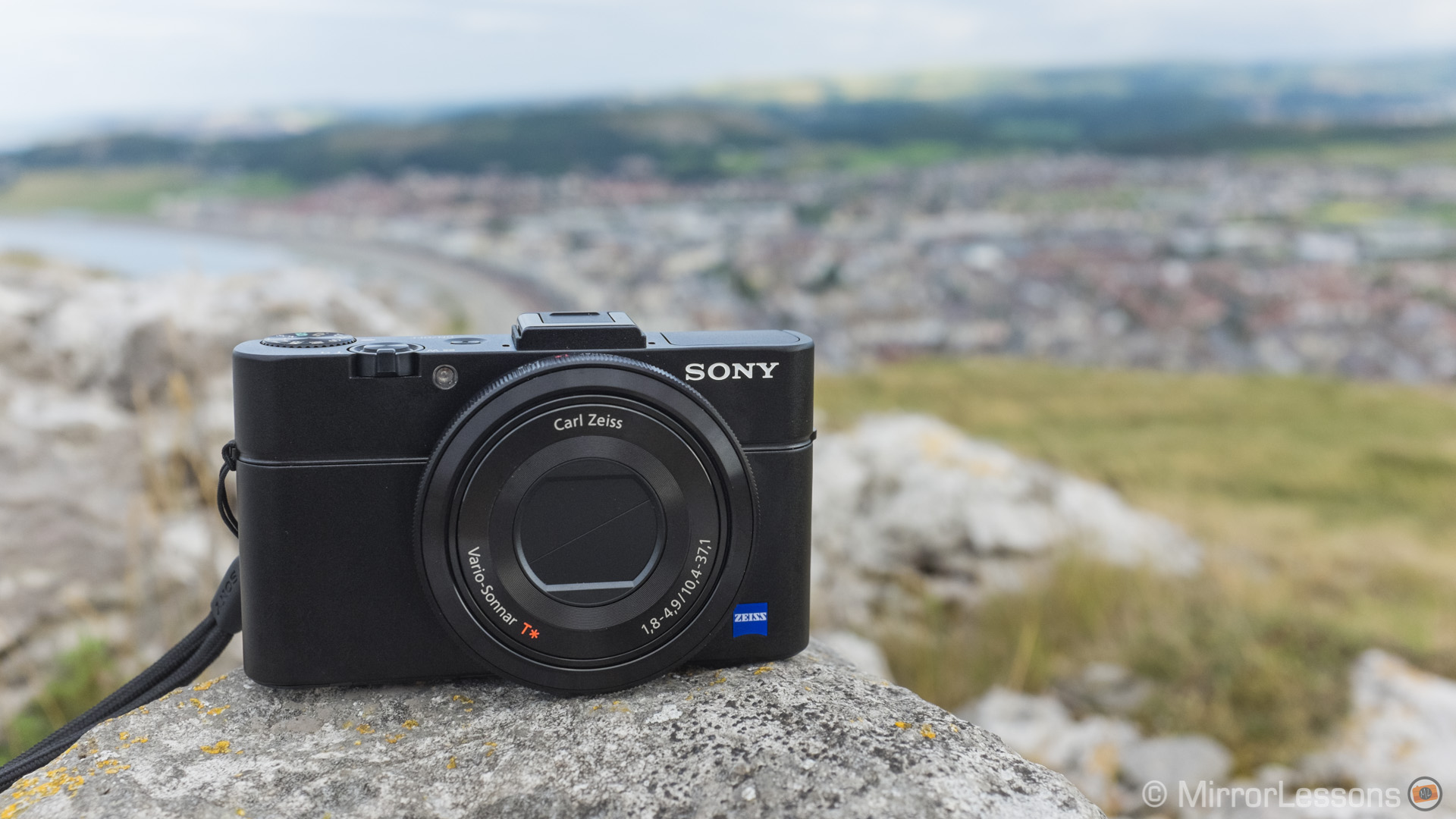 Yesterday, we went on a day trip to North Wales to visit the Great Orme, a massive hill that hugs the bustling city of Llandudno. One of the primary goals of that trip was to stop at the Cambrian Photography shop in Colwyn Bay to have a second ‘hands-on’ with the yet-to-be-released Panasonic DMC-GX7. Unfortunately, it has been shipped to another location, so we left the shop not only with a brand new Sony RX100M2 (one of only 50 in the country) but a cake as well. Yes, a cake! Because at the Cambrian Photography shop, they also sell sweets! So, if you want to find out more about the new RX100 II, or discover which type of cake we bought, keep on reading! 😉

The Sony Cybershot DSC-RX100M2 is an update on its predecessor, the RX100. Released in 2012, it is a compact camera featuring a large sensor, fast aperture Carl Zeiss zoom lens, excellent low-light performance and great image quality. With the release of the RX100M2, Sony has implemented many new and interesting features:

N.B.: I haven’t ever owned the RX100, nor have I reviewed it, so I cannot make a direct comparison between the two models.

As soon as we left the store, we got back in the car and drove to Llandudno. I took out the camera and inserted the battery, hoping that it would not die on me so I could take a few shots right away. Luckily for me, the display showed it as being almost full. Once parked, we had a walk along the main street to see some shops. While my family was focused on the store windows, I started taking my first shots with the camera.

Within less than a half an hour, my battery level went from 3/4 to 1/4, so I knew that the camera wouldn’t last forever. This was understandable as the battery hadn’t been charged and it had just come out of the box.

In that small amount of time, I was already pleased by the small size of the camera. It is much smaller than my hand and can easily fit in the front pocket of my jeans.

The build quality is awesome. Every button and dial feels solid, and the LCD screen is sharp and bright. I’m usually not fond of shooting only with a LCD screen as I prefer viewfinders, but this is a compact camera so I adapted myself quickly.

The hot shoe can host an external viewfinder, but for now there is only one available and it is quiet expensive (around $450). This is because it was designed for the RX1, which is a much more expensive camera. The gentleman at the Cambrian Photography shop told me that Sony will release a cheaper version for the RX100 series. This makes sense as you wouldn’t want to buy a viewfinder that is more than half the price of the RX100 II!

Back in the town, we entered an arcade. Being inside, I had the opportunity to raise the ISO to 800 and see how the new improved Exmor sensor would handle it.

As I wrote before, I’ve never owned the RX100 before so I can’t tell you if there are any differences. However, being used to great ISO performance from other high-end cameras and DSLRs, these 800 ISO shots look really good to me.

Another thing worth mentioning is that the AF struggled a little when I tried to take a wide shot of the gallery. I focused on the centre of the background, but it took a few attempts to focus it properly. This is the only time the camera didn’t focus quickly – otherwise it focused instantly.

My battery still had some juice, so we decided to walk up and over the Great Orme. Unfortunately, the weather continued to be very cloudy so I couldn’t really capture vivid colours of the scenery.

Instead of trying to capture the amazing colours of the landscape, I focused on taking some shots at fast apertures. As with the previous RX100, the RX100M2 has a fast zoom lens that goes from f/1.8 at its widest angle to f/4.9 at the longest focal length. Very impressive performance for a compact camera, so I was curious to see how much shallow depth of field I could obtain. Of course, the camera has a 1 inch sensor (2.7 crop factor compared to 35mm format), so the bokeh won’t be incredible unless you really focus close to your subject. Still, I was very impressed by the lens performance. I don’t see visible vignetting, it retains a lot of sharpness and you can achieve some pretty decent DoF.

Of course, as you start to zoom in, the aperture will start to close up as it isn’t a constant aperture zoom. If you want to stick to f/1.8, you need to stay at the shortest focal length, which is 10.5 (28mm equivalent on 35mm format). This means that if you want to take some portrait shots at that focal length, you will get some geometrical distortion, but this camera isn’t meant for professional portraiture so I wouldn’t worry about this.

Little by little, I am feeling more confident with the ergonomics of the camera. I have big hands so I am usually less comfortable with small bodies. With this one, I am fine but a little grip on the front left would help me hold it better.

The camera also has a ring on the lens to which you can assign different function, but I find it very hard to turn. Since the body is very small and lightweight, turning the ring can throw you off balance as you shoot. As such, I stayed in Aperture priority mode and used the dial on the rear to change the aperture.

I like the Fn button next to it, where you can quickly access ISO, WB and other settings. I really haven’t gotten into the customisation of the camera yet, but my first impression about its functionality is very good. The toggle zoom on top is fine, but when you want to precisely adjust the focal length for your composition, it is hard to zoom in or out in small increments. I think the lens ring would be better for this, so I’ll try to assign that function to it.

The tiltable LCD screen is of course useful for different angles and positions, but it seems a little bit delicate to me, so I don’t want to tilt it too hard.

Walking to the top of the Great Orme

Near the middle of our walk, the battery was still alive and kicking, which was a big surprise. I had been using the camera for more than two hours, and despite not having been charged for a long time, the camera continued to work well, even though the battery life showed only one bar left on the screen. To preserve the battery life, I turned it off when I wasn’t taking pictures, so I guess that might have helped.

While heading to the top of the Great Orme, the red battery sign started to flash, but I managed to get to the top and snap a few shots. Then, going back down, I snapped the final shot of the tramway. So, in the end, I managed to take almost all the pictures I needed for my first impressions review with an uncharged battery. Really nice.

When the battery completely died, we were about to go back to the car and head home. Upon my arrival back home, I charged it for ten minutes and took a few quick pictures at high ISO levels. I can confirm what I had predicted before – the ISO performance of this camera is really good. Just check out the 6400 and 12800 shots below. Really impressive for a 1 inch sensor! Also, the AF was quick, so it seems to work fine in low-light conditions.

N.B.: If you got this far, you may we wondering what kind of cake we bought at the Cambrian Photography shop! Well, the cake shot below is the very one we purchased. It is a lemon cake made by Bev’s Cakes, a very traditional sweet in this region! If you ever go to North Wales for your camera equipment, be sure to pop by!

I have only used the RX100M2 for less than a day, but it has left me with a very good impression for a compact camera. The ISO performance seems really impressive, and sharpness is another strong point. Colour reproduction seems fine but I need to perform more testing for that. The ergonomics are great for a camera than can easily fit into my jean pocket. It is fast, and therefore seems very reliable in any sort of situation.

Since I have it for all of August, I will post more pictures, galleries and in-depth articles about different features as time goes on, so stay tuned!

P.S.: By the way, the lemon cake is really awesome!