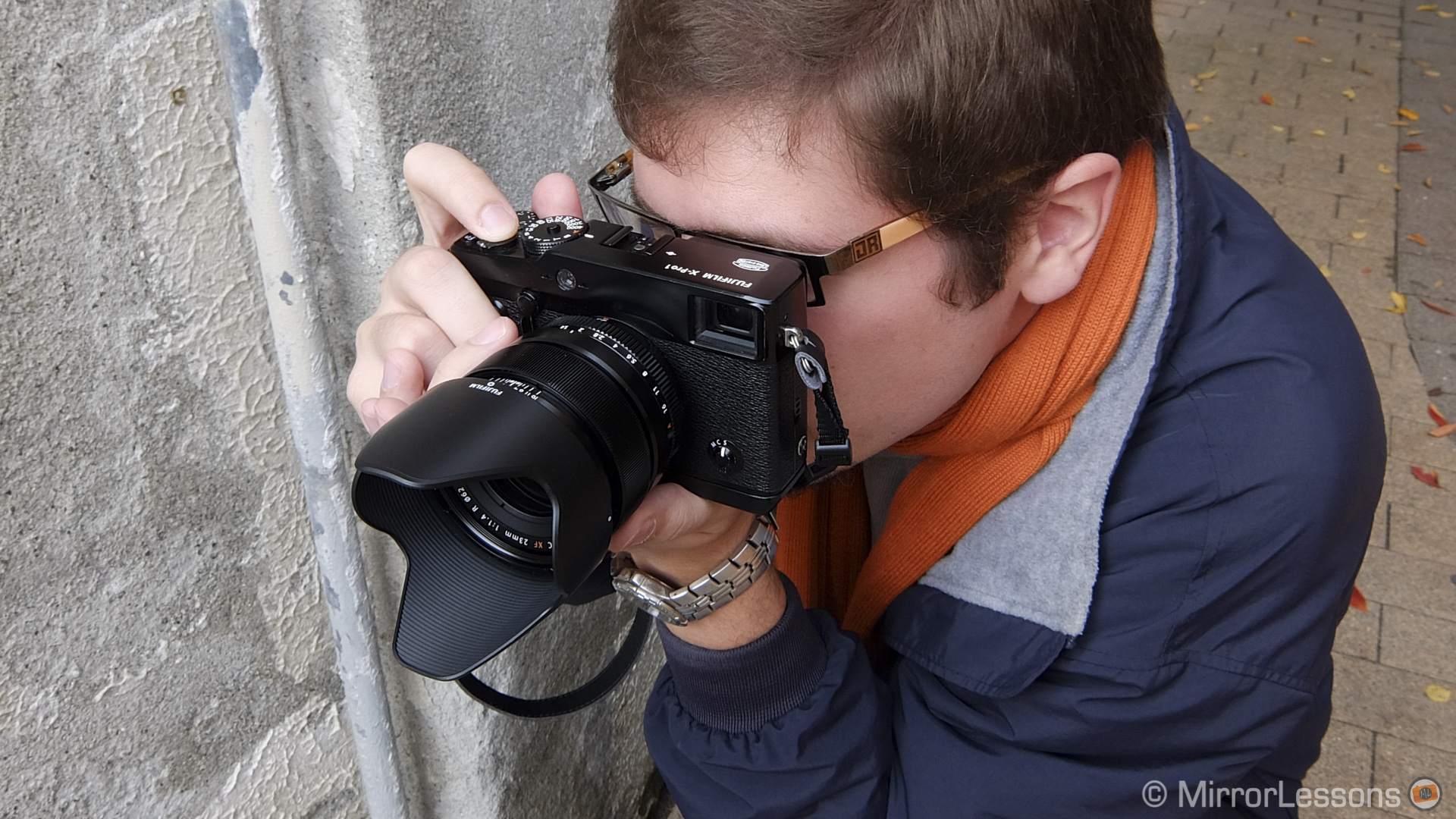 We photographers love fast apertures. We are like kids at Christmas, yearning to see just how blurry and ‘bokehlicious’ the background can get. And not that there’s anything wrong with that, as a famous comedian once said. A fast aperture lens is always nice to use. And if it is a wide fast aperture lens, even better. I find these lenses way more fascinating than telephoto or portrait lenses because of the focal length factor. With a wide lens, the mix of vastitude and shallow depth of field gives more punch to your photographs and brings them closer to the much-desired full-frame look.

Now that I’ve gone mirrorless, the only lens I really miss from my full-frame gear is the 24mm f/1.4 by Nikon, the best lens I’ve ever used. Though my time with it was brief (I sold much of my Nikon gear six months later), it was love at first sight. The Fujinon XF 23mm f/1.4 reminds me of it, even though it doesn’t have the same equivalent focal length.

Another case of love at first sight, perhaps?

The very words ‘fast aperture lens’ generally imply a high quality build and premium glass. The new XF 23mm f/1.4 (35mm equivalent on full frame format) is no exception. From the first pictures I took with the X-Pro1, I suddenly recognised the same look I’d seen with the XF 35mm 1.4 which I used on several occasions when I reviewed the camera. Wonderful bokeh, great sharpness and overall excellent lens performance. Let’s have a further look then, shall we?

The 23mm f/1.4 is larger and longer than the 35mm f/1.4. Therefore the filter size is also larger (62mm vs. 52mm). It weighs more than other XF primes so from the start you really feel the premium quality of the all-metal build.

Like all the Fujifilm R lenses, it has an aperture ring which is smooth yet very precise. You won’t accidentally change your aperture as you might on other lenses such as the 14mm. The focus ring is also very sturdy and precise and it is also large, which makes it very nice to use. Furthermore, like the 14mm and some Olympus primes, you can shift the focus ring back and forth to quickly switch from auto to manual focus. When you shift it back for manual focus, the focus distance markings are revealed. The hyperfocal distance markings are also present on the top edge of the lens.

The petal-shaped lens hood is bigger than I would have expected and it adds a significant extra length to the lens. If you want to leave it mounted on the lens, forget using the OVF on the X-Pro1 as the lens+hood gets in the way of the frame, partially obscuring the view of your composition. You will end up only relying on the EVF.

The autofocus seems as fast as the other Fuji primes with the latest firmware updates. I was impressed by the AF improvement found in the last X-Pro1 and XF 35mm firmware updates, and the 23mm delivers the same performance in terms of AF.

The XF 23mm f/1.4 is composed of 11 elements in 8 groups, including an aspherical lens. Fujifilm states that the lens distortion has been reduced to a minimum using an optical solution rather than digital correction applied by the camera processor. That is one of the first things which surprised me – distortion is indeed almost non-existent. Of course a few samples isn’t enough to confirm this, but this looks very promising.

When it comes to portraiture, like every 35mm equivalent focal length, you need to be careful not to distort a person’s face. This is a general rule when it comes to portraits. But of course, if the lens has minimal distortion from the start, it can help and this is another positive thing about the 23mm. If you are careful, it can be used for that purpose and its fast aperture gives you a real nice look.

Below you can see two 100% crops of the pictures. The crops were exported from Photo Ninja, which renders Fuji RAR files better for sharpness (among other things).

If you pay attention, you can notice a very tiny blurred halo around the edges of the leaf. This is something you can see on very fast aperture lenses, but it is only visible if you view the photos at 100% crop size, which doesn’t represent what you see in a real world situation. For me, it is perfectly fine and honestly, I feel that the blurred halo contributes to the unique look you can get with this lens at f/1.4. Speaking of sharpness, the results seen in the crops are really good. And for those who are obsessed with sharpness, boost the value in Lightroom or any RAW processor and your images will become razor sharp!

Of course, while we might be tempted to use this lens at its fastest aperture as much as humanly possible, it isn’t the only positive aspect of the 23mm. I tried it at all apertures and the results are exactly what you might expect. From f/2.8, it becomes perfectly sharp even in the corners and maintains this level of sharpness up to f/11.

At f/16, it suffers slightly from diffraction, but again, it’s nothing out of the ordinary. All you need to do is give your images some sharpness in post-production and you’re set.

I particularly love the results concerning light and contrast. The render is very accurate and lights and shadows are well-balanced. This lens has character, there’s no doubt about it. It performs well even in backlit situations thanks to the High Transmittance Electron Beam Coating.

If you pixel peep at some images, you can find the presence of chromatic aberration in the RAW files but it is very minimal and you need to search for it. Again, not a problem in the real world. And these days, software programs handle this very easily. On the JPGs, there is almost no chromatic aberration meaning that the EXR processor is very efficient at its job.

Ah, here is a question that has been popping up a lot recently on forums and groups. A few people have even asked me directly for advice about choosing between the two. I can understand the curiosity to compare the performance of the two lenses so I made some quick comparison shots to demonstrate the similarities and differences.

Now, the way you use the XF 23mm f/1.4 lens and the Fuji X100s is very different and the first thing to mention is bokeh.

The X100s has a leaf shutter. Without going into the technical details, it has some advantages such as flash sync at almost any speed and very minimal shutter noise. But if you use a fast aperture to render the background blurry, you need to select a shutter speed slower than 1/1000, otherwise the blur will end up with a kind of “shaken” effect. This is due to the fact that past 1/1000th, the outer edges will get less light due to the physical properties of the shutter and resulting in this “shake blur effect”. This is why the X100s has a built-in ND filter with an equivalent of 3 stops – it allows you to get slow down the shutter speed and therefore render a more nice looking bokeh.

In terms of sharpness, I both found that they both produce very similar results. Of course the XF 23mm will give you an extra stop advantage and therefore a shallower depth of field. The look of the 23mm seems more pronounced and therefore I’m sure that someone can conclude after extensive usage that it is a better lens overall.

Since I didn’t have a lot of time with the lens, I couldn’t perform a proper comparison with lots of shots. But for those who are interested, below you can find the same shots taken at f/2 and f/5.6 with both cameras (and it’s a different wall! :).

But comparing the performance of these two lenses isn’t really important as we are talking about two different cameras.

The X100s and its lens come in a unique package which you cannot separate. It has a fixed prime lens and honestly you don’t buy the X100s for its lens only, you buy it for the whole experience and its many different characteristics. The leaf shutter, for instance, can allow you to shoot at f/2 in bright daylight to isolate your subjects and it is also very interesting for flash sync possibilities.

The X100s is a completely independent system whereas the XF 23mm f/1.4 is part of a larger system. It is probably not the only lens you will own for your X mount camera and you might only choose it for specific kinds of shots.

In my opinion, no. I would suggest buying a different focal length for your interchangeable X camera which will complement the X100s in your work. Both cameras will have a designated role in your photography work, so there is no need to have two lenses of the same focal length in your bag.

If the 35mm (equivalent) focal length is your favourite, should you buy an X-mount camera with the 23mm or just buy the X100s?

Well for me the answer is simple: think about the camera and the system, not just the lens. Do you prefer an interchangeable-lens camera or a fixed lens camera with a compact build? Because either way, you will get your favourite focal length (though admittedly the interchangeable package will be more expensive). Understanding why an X100s may suit your needs better than an X-Pro1 or vice versa is much more wise, and in the end will give you much more satisfaction.

Of course, if you ask me what I think of this new 23mm f/1.4, even though I only tried it for 15 minutes, I can tell you that it was indeed love at first sight.

Thanks goodness I don’t own an interchangeable lens camera from Fuji (yet), so I don’t have to lose sleep over whether I should purchase it or not (yet)! 😉

Below, you will find some additional samples.