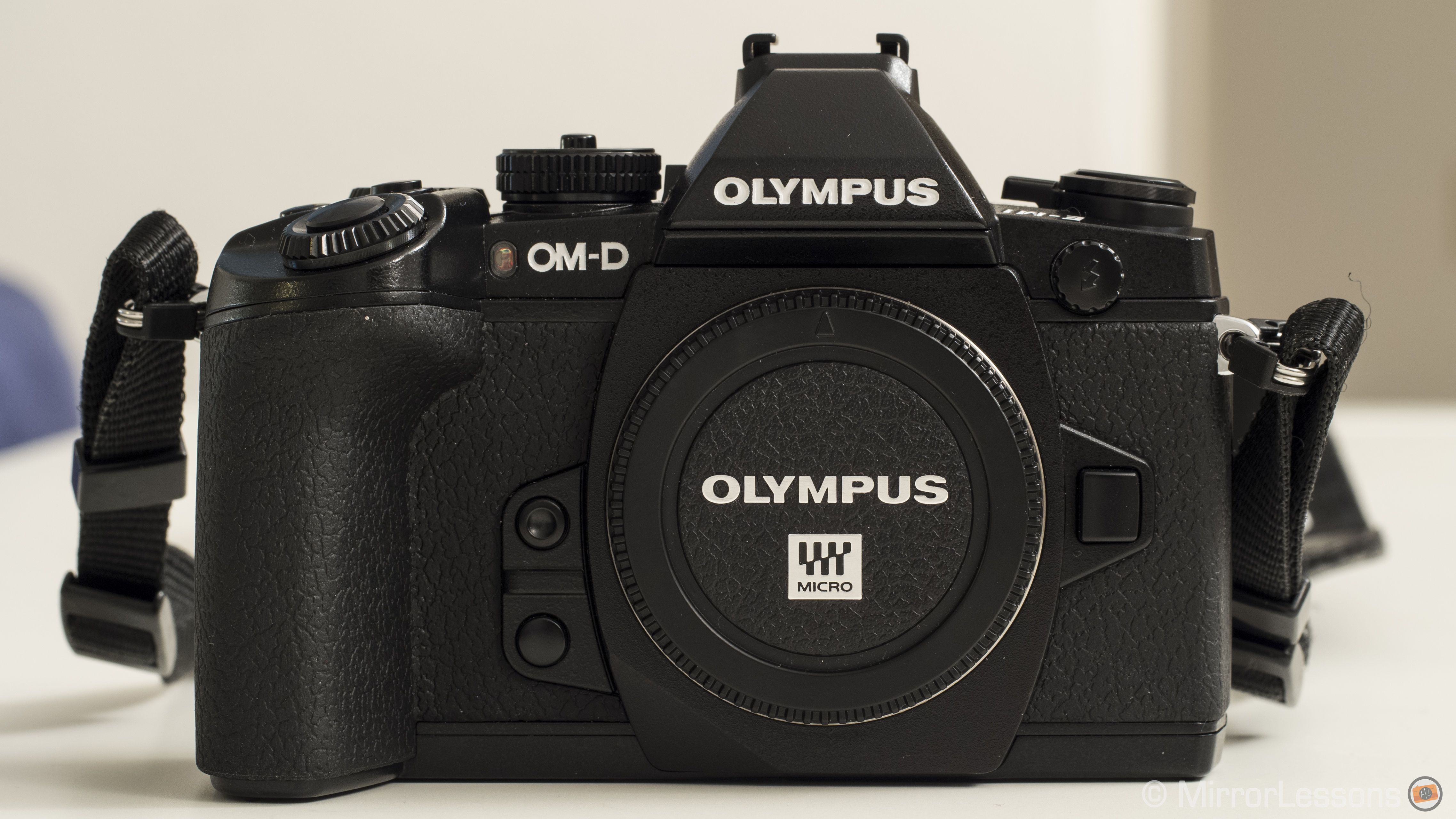 You may not see many of them, but they’re there: professional photographers who have dispensed with much, if not all, of their heavy professional gear in favour of a lighter mirrorless system. Their reasons are many. Some have chosen a lighter load due to physical health problems. Others have come to the realisation that, for the kind of photography they do, a full-frame DSLR simply isn’t necessary. Either way, these photographers turned to mirrorless because they were looking to change the way they work. Plain and simple.

Amongst the most popular models chosen by professionals, the Olympus OM-D E-M1 is very high up on the list. In fact, it is the camera Mathieu currently uses for all of his professional work, which ranges from weddings to cooperate events to reportage.

Before the E-M1, he used the E-M5 for an entire year, and though he was confident in the older model, he firmly believes that the E-M1 is the first serious mirrorless from Olympus for professional photographers. Everything from the ergonomics to the internal functionalities has been conceived with professionals in mind.

And unsurprisingly, Mathieu isn’t alone in his praise of the OM-D E-M1…

Below you will find a list of ten professional photographers who use the OM-D E-M1 for professional assignments, all of whom have written a short paragraph about the E-M1’s role in their photography.

Reading these passionate accounts written by professionals who use the E-M1 on a daily basis makes us realise that this isn’t a camera to be ignored by someone looking for a lighter and more compact solution.

Intrigued? Then read on, leave our photographers a comment, and visit the amazing work they’ve created with the E-M1 on their websites! 🙂

“I am an Italian photographer who switched over to the Olympus world in November 2013, specifically when the new OM-D E-M1 arrived on the scene.

I was looking for a small camera capable of giving me good quality image with all the lens choice I had with my Pro Nikon gear, and letting me travel light!

I just moved to Franschhoek South Africa at 65 km from Cape Town and with my Olympus gear I can shoot almost anything from weddings to landscapes to events, portraits, corporate events and still life. What I like most is the weather-sealed factor, the size and the discreet sound of the shutter (very important with weddings or events in general) as they allow me to be close to the action and “not be seen.” But the main strength of this camera is the IBIS, which allows you to shoot sharp images at 1/15sec and at f1.8 while keeping the ISO values low with an equivalent lens of 150mm on a full frame camera!

My favourite lenses are the Olympus 75mm f1.8 and the Leica Pana 50mm f1.4. Both very sharp with outstanding image quality but really the entire range of Olympus lenses is amazing!”

The only time I ever hear anything about the size of the camera is when I’m backpacking and even then it’s just envy about qualities like the weight and size. Do not be fooled by the size of this camera – it is a powerhouse and has no problem running with the big dogs!

But of course, being an Olympus Trailblazer, I guess I’m a little biased!”

“I’m an urban photographer with a focus on London as a whole. This involves long walks across London, capturing its every aspect from architecture, urban landscapes, street art and people as part of my street photography work.

The E-M1 is excellent as it’s light and discreet. I am also very active on social media and the ability to send my shots from camera to phone on the move, means sharing has never been easier/faster.

Finally, I get hired for various shoots, the most recent involving food photography for the relaunch of a renowned restaurant’s website. The E-M1 is versatile and a great all-rounder that works for me.”

“I would classify myself as a Nature Photographer since it leaves the door open for many sub-categories of photography. There is nothing worse than limiting yourself by sticking to one thing only in my opinion.

The Olympus OM-D E-M1 (like its predecessor the E-M5) really opened the door for unique opportunities in my photography by allowing me to carry more gear into the field. Also with the advent of the OM-D line the EVF allows for real time exposure viewing, and on the E-M1 in particular, the high resolution display coupled with focus peaking makes that EVF one of the most powerful tools in my bag.

And though I consider myself a still photographer, I find myself using the E-M1’s time lapse and video functions more and more. The ability to create an in camera time lapse is a treat to use! And one last thing I feel I must touch on is the camera’s built in WiFi controls. I have gotten several difficult wildlife shots by being able to remotely trigger my camera via my phone. What a game changer that is!”

I am a documentary photographer specialising in weddings and other social commissions. My clients value a low impact approach to produce natural and unforced images as a lasting record of their life moments. The equipment used has a direct influence on the way I work and therefore the images I am able to create: smaller and lighter gives more flexibility and stealth!

After using various mirrorless cameras alongside DSLRs for around 2 years, in early 2014 I made the full transition to using a dual Olympus E-M1 system with a range of prime lenses including the spectacular Voigtlander manual focus hyper-primes. The system has made a significant difference to how I work, blend in, observe, and capture images. Crucially, I am able to maintain the high level of quality that is expected by my clients.

I began photographing weddings in 2002 after a workshop in Atlanta with Denis Reggie, the photographer who popularized the genre of wedding photojournalism. I’ve been a full-time photographer since 2004. My work is mainly weddings and portraits. I also do corporate photography and other special events.

This year I’ve brought the E-M1 to most of my assignments. It’s main role for me has been to substitute for a DSLR with an 85, 135 or 70-200mm lens. That’s where its size and weight are delightful. The Panasonic 42.5mm Nocticron and the Olympus 75mm lenses have been fun to work with. I also use the E-M1 for some family photos and personal work, often with the Olympus 17mm lens.

My professional work mainly covers corporate events such as conferences and product launches. I follow a photojournalistic style for events. I also do product pack shots and I lead photographic safaris here in Southern Africa.

I first added an Olympus E-M5 to my professional setup just shy of 2 years ago. I used it mainly to get candid shots of conference participants which complimented what I was doing with the Nikon DSLRs, but when the E-M1 came out I saw no reason to continue lugging around the monsters when these Micro Four Thirds cameras were capable of producing the results I wanted (and in many instances doing it better). So my big rigs are now gone and I find myself using the E-M1 for everything from sports action to the full gamut of my professional work. It’s a camera that you need to grow into to fully appreciate, but in all honesty I don’t think there is too much you can’t do with it. In a few months time I am leading a safari in Botswana and will put the E-M1 up against the wildlife photography challenge. It’s going to be great, everything I need on safari will fit into a ThinkTank Retrospective bag!

As a wedding photographer I was looking for a compact and lightweight camera system in addition to my DSLR kit. The E-M1 got my intention, because it seemed very capable and was fully aimed towards experienced and professional users. After using it for a while, I realized that I was starting to use it more often than my D800. I was totally blown away by its usability and the very pleasing image quality. So I got rid of my DSLR rig and I am now shooting mirrorless only. The E-M1 has everything that I need and fits my unobtrusive style of documenting weddings pretty well.

I am currently using my E-M1 and various pro lenses to photograph weddings, family, and senior portraits. Like a lot of photographers, I am gradually moving from a full frame pro DSLR system (Nikon) to the smaller, and very capable Olympus M4/3 system. I have found that the E-M1 produces high quality images that rival what I can get from my Nikon D3s. There ARE certain limitations with regard to high ISO and focusing on moving subjects, something which my Nikon is better at. At most of my weddings I like to take a few low level shots during the ceremony. The tilt screen on the EM-1 makes this kind of shot so easy to do.

The smaller, lighter Olympus system is extremely helpful for all location work due to its light weight and compact design. It’s truly a joy to use.

Edmond Terakopian, a London based photojournalist, commercial photographer and film maker, who is a British Press Awards Photographer of the Year and a World Press Photo award winner incorporated the Olympus OM-D E-M1 into his camera gear soon after its launch. Terakopian says “The second I held the E-M1, I knew it was a special camera. It just felt right. The design and layout married to lightening quick and accurate focusing paired with great image quality just cemented my first feeling. I’m also hugely impressed with the 5-axis stabiliser, not only for photography but also for video, where it’s a tremendous feature to have”.

Terakopian has been using the E-M1 for several recent projects; the LA Diary shot over the course of a week in Los Angeles and more recently a visit by HRH Princess Eugenie to the Royal National Orthopaedic Hospital where the Princess is a Patron. At the moment he’s just finished shooting a film project on Pinball using the E-M1.

Terakopian says, “the small size of the cameras and lenses mean that it’s less obvious on the street. It’s also so much easier to pack into a small bag and carry. It’s super fast, super small, lightweight with great fast prime lenses and a superb pro zoom covering the 24mm to 80mm range (equivalent). It’s a no brainer really!”.

Enjoyed this article? Then you may also like our interviews with the following Olympus photographers: