You are here: Home / Comparisons / Comparing the Panasonic GX8 and Olympus OM-D E-M1 – Sensors and stabilisation 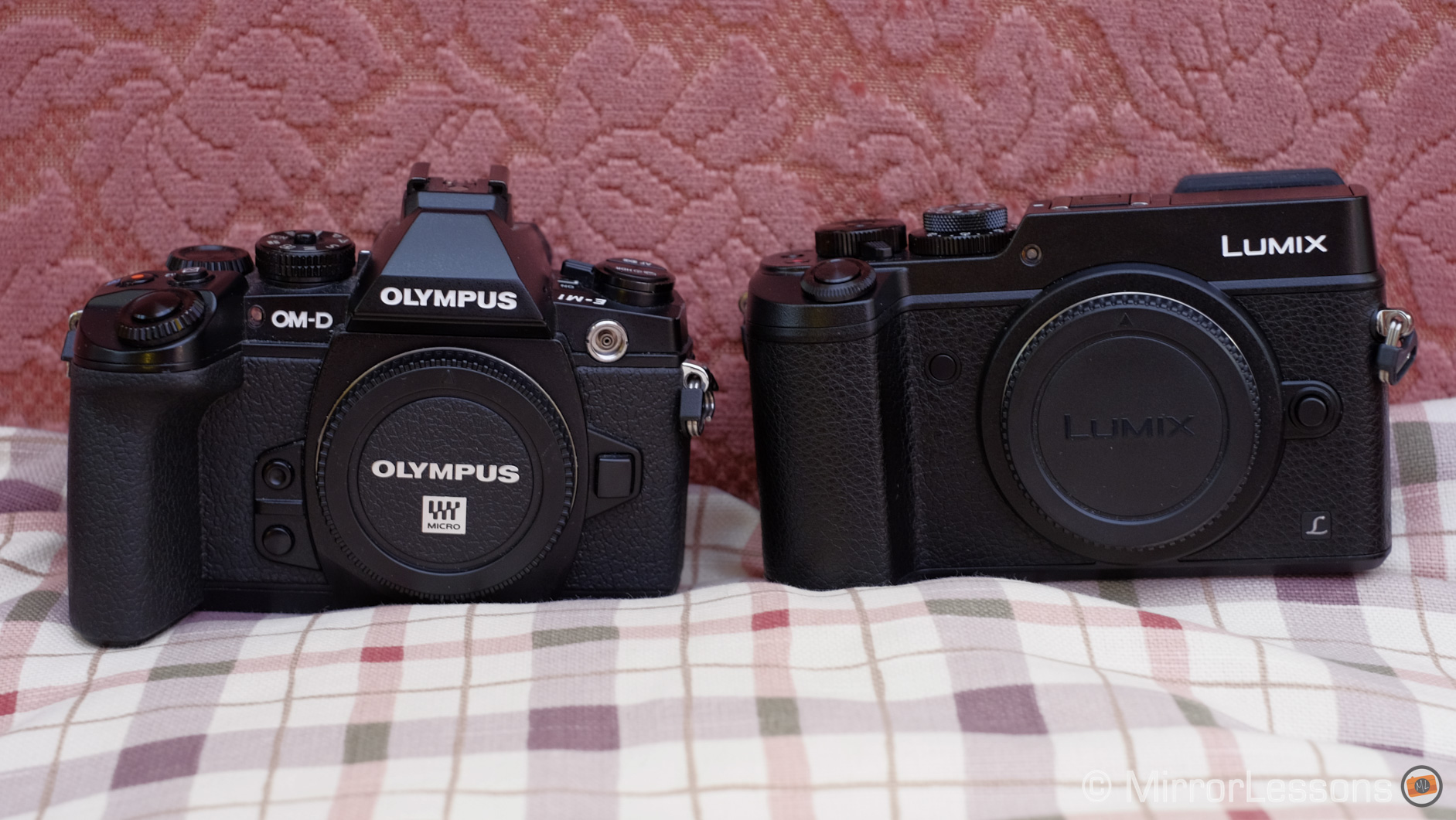 The Panasonic Lumix GX8 is a camera full of firsts, from its new 20.3MP Micro Four Thirds sensor to the integration of Panasonic’s first dual image stabilisation system. Of course, as with any new feature, photographers are curious to know just how they stack up against the competition – namely, the 16MP sensor on other Micro Four Thirds cameras and the 5-axis in-body stabilisation found on Olympus OM-D cameras.

Since we own the flagship Olympus OM-D E-M1, we decided to use it as our point of comparison. Its sensor is representative of most 16MP Micro Four Thirds sensors you’ll find on the market today, and the 5-axis stabilisation is only second to that inside the OM-D E-M5 II.

Note: Unless otherwise stated, all images are Raw files exported from Lightroom CC as JPGs.

To perform the test, I used the M.Zuiko 12-40mm f/2.8 PRO lens with the aperture set to the sharpest value of f/5.6. Since I was shooting outdoors on a sunny day, I chose a white balance of 5600 K and an ISO of 200 with the Natural profile. The same focus point was selected for each pair of shots.

Sincerely speaking, neither of us expected to see a significant difference in sharpness between the GX8’s 20MP sensor and the E-M1’s 16MP sensor and it turns out that our intuitions were spot on. The Raw files from both cameras are excellent and practically identical in terms of sharpness.

As for the JPGs, it seems that the E-M1’s JPG engine applies more contrast and sharpness when left at the standard settings. Of course, should you want more sharpness and contrast from the GX8’s OOC JPGs, you can always increase both from the picture profile menu.

The call of a higher megapixel count is always tempting (just look at the world’s reaction to the recent announcement of Canon’s 250MP APS-H sensor), but the truth is that in the real world, the addition of only a few megapixels won’t make a tangible difference to the sharpness of your images. That’s not to say this new 20MP sensor isn’t excellent; it just isn’t a game changer.

The second test took place indoors in a dimly lit room with the M.Zuiko 12-40mm f/2.8 PRO mounted on the two cameras. I compared the ISO performance from Low ISO 100 all the way up to 25600. The settings of the two cameras were exactly the same for each shot (WB of 5000 K, aperture of f/8, Natural profile). I also set noise reduction to 0 on the GX8 and Standard on the E-M1. (Note that you can choose a NR value as low as -5 and as high as +5 on the Lumix, so 0 is more or less the equivalent of Standard.)

Looking at the Raw files, there isn’t any visible difference in performance. Both perform well up to ISO 1600 and produce useable files up to 3200 or 6400 ISO depending on your tolerance for noise. After 6400 ISO, the files become too grainy to be useful and there is a significant loss in detail.

Below are two examples taken at 3200 ISO. For a full set of images, you can visit our SmugMug gallery.

You may notice that the Olympus files have a slightly warmer tone than the Lumix files despite the WB being the same. This is because Lumix cameras generally produce colder images with more of a magenta tinge.

The next step was to look at the dynamic range of the two sensors. Living so close to the sea, there wasn’t a better subject to test the DR than the setting sun!

Below you’ll find two pairs of images. The first pair consists of the untouched Raw files from the GX8 and E-M1. The second consists of the post-produced versions with the shadows opened to +100 and the highlights reduced by -100 in Lightroom CC. Move the slider to the right to see the GX8 image. Move it to the left to see the E-M1 image.

Once again, there aren’t any significant differences to speak of. It is quite easy to recover details from the highlights and shadows, though some noise does appear if you recover the shadows too much.

The two pairs of crops below show the similarities in highlight and shadow recovery.

The fourth and final test dealt with noise reduction for long exposures. It is well-known that the E-M1 suffers from a lot of noise when NR is turned off. This is problematic for star trails because leaving NR to ON will result in gaps between your images while leaving it off will generate too much noise.

Thankfully, Olympus came up with a solution in the form of Live Composite, a feature that allows you to take star trails in-camera with automatic noise reduction. The GX8, on the other hand, doesn’t have a Live Composite mode for star trails, so it is essential that long exposures taken with this camera don’t produce too much noise with NR set to OFF.

To test the two cameras, I placed them on a tripod, turned off NR for long exposures and set a shutter speed of 30 seconds.

As you can see, there is significant noise (small white specks) in the E-M1 file while the GX8 file appears very clean.

Visit our SmugMug gallery to see a full series of high resolution images taken with the GX8 and E-M1. All the files are JPGs exported from Raw in Lightroom CC.

Once image quality was done, it was time to move on to image stabilisation. Most cameras in the Olympus OM-D series have 5-axis in-body stabilisation, which means that you can stabilise any lens regardless of whether or not it has optical stabilisation. In our previous tests, we’ve been able to achieve in-focus shots down to 1 second with the E-M1 and an amazing 1.5 seconds with the E-M5 II.

In our previous tests, we didn’t find the GX7’s in-body stabilisation as effective as the 5-axis stabilisation of the OM-D series, so we were curious to see whether the new Dual IS system would make a difference. To perform these tests, we used the M.Zuiko 12-40mm f/2.8 and Lumix 35-100mm f/2.8.

The GX8 will only activate its 4-axis in-body stabilisation when non-stabilised lenses are used, such as those in the M.Zuiko line-up. For the test, I mounted the M.Zuiko 12-40mm f/2.8 PRO lens on both cameras and took a series of shots between 1/8 of a second and 1 second at 40mm.

I have to say that I was quite surprised by the results I achieved with the GX8’s in-body stabilisation. Despite only working on 4 axes, I was able to take sharp shots down to 0.8 seconds with a couple of attempts.

With the E-M1, I was able to achieve a sharp image at 1 second on my second attempt, which is consistent with the results we’ve achieved in the past.

I then mounted the Lumix 35-100mm f/2.8 on the GX8 to test the combination of optical stabilisation and the camera’s in-body stabilisation. In this case, I achieved results that were comparable to the E-M1. After two attempts, I managed to achieve an in-focus shot at 1 second.

It is worth bearing in mind that while the performance of these two cameras is impressive, a few attempts are usually required to achieve a sharp image at any shutter speed slower than 1/2 a second. The take-home message is that it is possible to take sharp images at these shutter speeds given the right conditions (a steady hand and body, a wide-angle lens, no wind, etc.).

On the sensor front, we’ve reached what some may consider a disappointing conclusion – the new 20MP in the GX8 appears to perform in a very similar manner to previous 16MP sensors like the one inside the E-M1. The sharpness, dynamic range and high ISO performance of the Raw files are practically identical, while the E-M1 displays a little more sharpness and contrast in the OOC JPGs when both cameras are set to the Natural profile with standard NR.

The moral of the story? Higher megapixel counts always look good on paper but may not always make a difference in the real world, especially when dealing with values as close as 16 and 20. Double or triple the number of megapixels, and there might actually be something to talk about.

The biggest difference can be found in how the sensors handle long exposures with NR turned to OFF. The E-M1 produces noisy files while the GX8 files are clear of noise. However, it isn’t really a big issue because the E-M1 can create star trails/light paintings in-camera with its Live Composite mode.

As for the stabilisation, the results from the GX8 were a pleasant surprise. Olympus’ 5-axis stabilisation system is a standard to which all brands aspire, so it is great to see a Lumix camera capable of keeping pace with the leader in the field. Though the Dual I.S. was the better performer, giving me sharp results at 1 second much like the E-M1, I also found the GX8’s in-body stabilisation very good with the M.Zuiko 12-40mm. This means that even owners of third party lenses can enjoy reliable stabilisation with the GX8.

Do you have any questions about the sensor and stabilisation of the Panasonic GX8? If so, leave us a comment below!