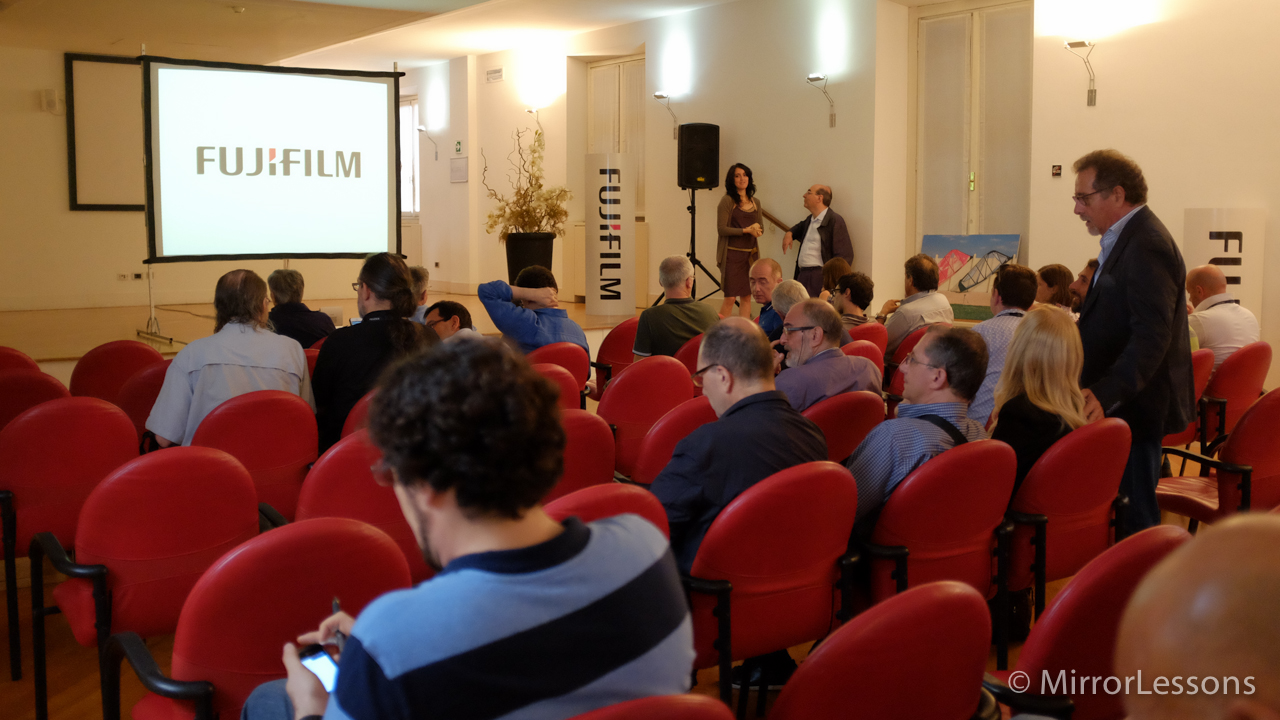 Here we are again, writing about the new Fuji X-M1, but this time we want to share someone else’s opinion. We don’t do this often, but in this case, we really appreciated Fujifilm Italia’s innovative approach in presenting this new camera to the press and public for the first time.

What they did was invite two photographers, one male, one female, who belong to two different generations and embrace two different photography styles, to try the new camera and share their photos/thoughts about it. The full gallery that has been published (you can see it here) reflects this approach, where these two different styles and generations come together to achieve a common goal – to present a camera, not as a cold hard gadget, but as a medium of artistic expression that can bridge even the widest gaps, be they stylistic, generational, or gender-based.

Below you will find a translation of Max Angeloni and Giulia Torra‘s thoughts about the X-M1 taken from the Fujifilm press release. I had the pleasure of meeting them both at the Fujifilm Italy Press Conference where the new X-M1 was on display.

To hear what they have to say, read on, and enjoy! And don’t forget to check out their full gallery here!

A warm thanks to Matilde of Fujifilm Italia for giving us express permission to translate the press release and utilise the photographs.

Two photographers, two styles, two approaches, two generations with one camera that reveals all its potential with every click.

For the launch of the X-M1, the “everyman’s mirrorless,” Fujifilm Italy wanted two spokespeople who belonged to two worlds that were stylistically and generationally diverse. One was Max Angeloni, the “photographer of people” with a long professional career, and Giulia Torra, who embodies the spirit of young photographers.

Walking along the streets, with friends, in well-known places as well as some not so well-known, they have demonstrated the many features and manners of approaching photography that are possible with the X-M1 with their work. With their photos, they have interpreted the spirit behind the conception of the X-M1, the perfect camera for those who want an interchangeable lens system, pay attention to performance and user-friendliness, and want to evolve and experiment. It is also for photographers who are looking for a lighter alternative system without having to compromise quality, thanks in part to Fujifilm’s fleet of lenses including a fixed wide-angle, macro and two zooms that cover a wide focal range.

The Fujifilm X-M1 – small in terms of price, but big in terms of the possibilities it offers to every kind of user. Despite being the least expensive CSC (compact system camera), the X-M1 does a good job of meeting the needs of both amateur photographers as well as those with more experience.

With the same image sensor as the high-end models, the X-M1 allows you to maintain an unaltered workflow if used as a second body alongside the X-Pro1 and X-E1.

In contrary to “entry level” cameras available on the market today, the X-M1 gives you direct control over the shooting functions, and its moderate price doesn’t undermine its operative capacity which is on the same level as high-end cameras.

The X-M1, besides being completely compatible with all the lenses and accessories in the X Series, possesses the same technology as the X-Pro1 and X-E1. As such, the X-M1 presents itself as a camera different from the rest on the market – a simplified tool that has removed the characteristics which its target market don’t consider indispensable. All in all, it is a camera without limitations in terms of both quality and practicality.

I found the Fujifilm X-M1 light and practical. The tilting screen is very useful. It allows you to take photos from unusual or difficult points of view, such as very close to ground level or from high up above. The X-M1 is extremely sharp, and there is hardly any noise even at high ISO. The lack of moving parts inside the camera allows you to shoot free-handed even at shutter speeds that aren’t very fast.

Besides the kit lens, I also tried the 35mm f/1.4. It is wonderful and very fun to use. It doesn’t have aberration or distortion, has a fantastic bokeh, and even when its completely open, the images it produces are very sharp.

A characteristic that is very useful is focus peaking, which is totally new to me. I had never tried a camera that has this function, and I have to say that it was a real eye-opener. Even in autofocus mode, and in situations that are usually quite difficult, such as focusing on a backlit object, it works very well. It is also fun being able to create shots with a double exposure, as well as the classic Fujifilm Film Simulation Modes.

I had never tried a mirrorless before, and I have to say that I was very impressed. It is the ideal nexus between the practicality of a compact, and the professionally and creative possibilities of a reflex.

A “photographer of people” since he can remember, Max prefers photography where the protagonist is the ‘human’ element: from reportage to fashion to weddings, his photographic services have been published in magazines in Italy and around the world. He was the exclusive photographer for the ‘photo love story’ Grand Hotel for the film production company The Best, and has been the official photographer for Tae Kwon Do CSEN since 2005. In 2010, he founded Riflessifotografici.com, a gateway to photographic culture and the homonymous cinematic production label for the production and promotion of independent films. As a director of photography, he was one of the pioneers in the experimentation with innovative video technology available on modern reflex digital systems, and their application in the cinematographic industry. Max Angeloni is a photographer for Fujifilm Italy, the Photoshow 20132, NPS (Nikon Professional System) Italia, and since 2012, he has been a World Wide X Photographer for Fujifilm.

Be sure to check out Max’s full review of the X-M1 on his website, Riflessifotografici.

Giula Torra was born in 1989 in Alessandria. She had her first hand in photography in 2004 as a still photographer for two short films (“Puoi donare la speranza, mettitelo in testa” and “Una giornata particolare.”) directed by Fabio Solimini, and for a full-length feature film (“Un posto all’ombra”), which won the Massimo Troisi prize in 2005. It was also directed by Fabio Solimini. In 2010, she moved to Milan to attend the European Institute of Design. In 2011 she worked as a still photographer once again on “Cristalli” (director – Fabio Solomini and director of photography – Pino Quini). In 2013, she participated in the collective exhibition Dialoghi & Monologhi, curated by Giancarlo Maiocchi, with the video Panta Rei, and in Istantanee di Vino – Young&Wine Edition, exhibited in the cities of Milan, Turin, Bologna, Florance, and Rome. In 2013, she graduated from a three-year photography course with the highest honours.