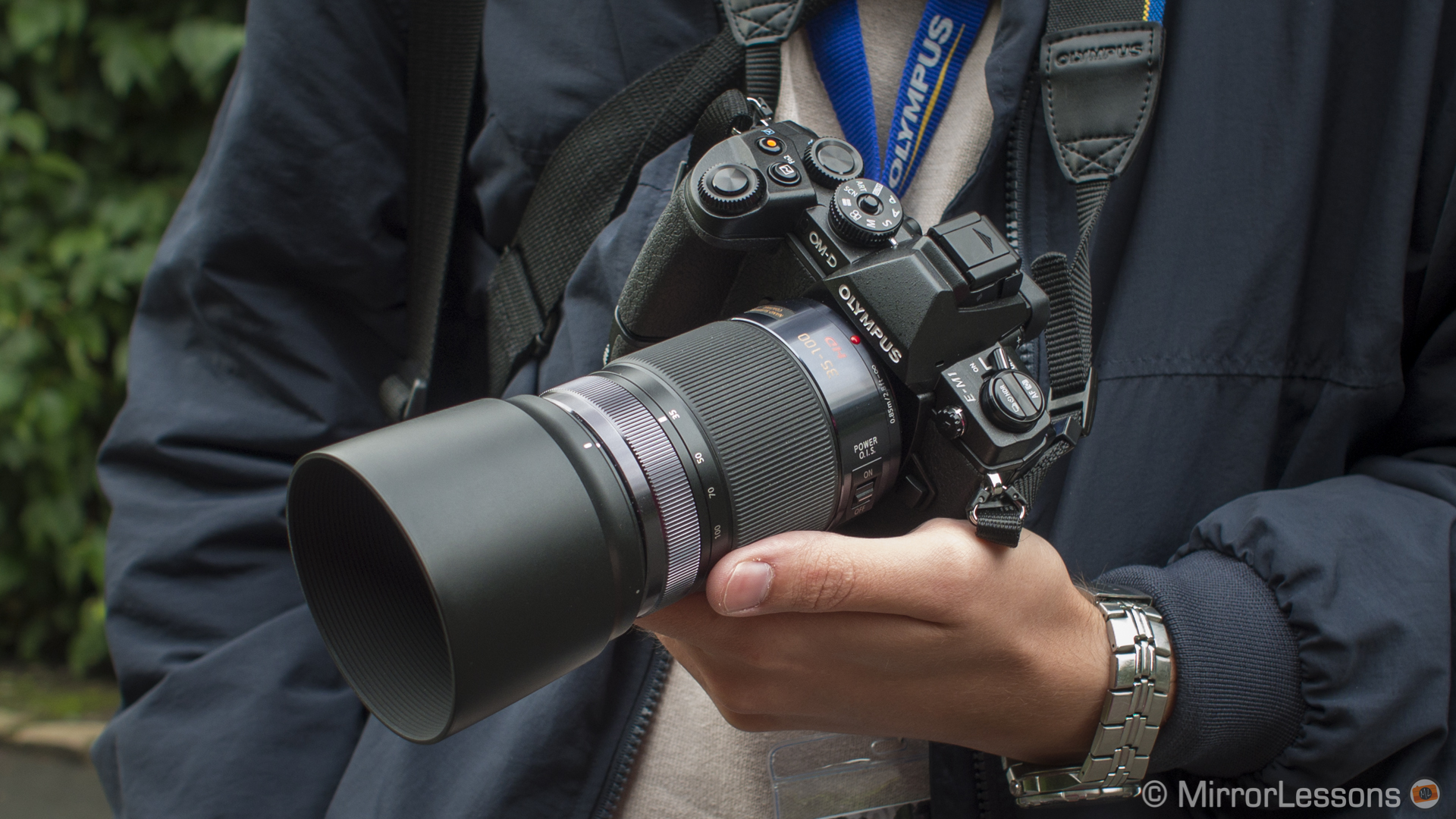 The new Olympus OM-D E-M1 represents a fusion of two distinct systems: Four Thirds and Micro Four Thirds. Olympus did develop a new Four Thirds DSLR, the E-7, but then decided to drop the project when they realised they could incorporate the best parts of both systems into one single camera. The body remains compact but includes all the features we professionals need, and works seemlessly with all Olympus Zuiko and M.Zuiko lenses.

The autofocus capabilities of the E-M5, the former Olympus MFT flagship camera, has always been bi-polar: super fast in AF-S mode, but limited in AF-C (continuous). An adapter for FT lenses was already available but the autofocus was very slow. So one of the main challenges in developing this new camera was to build a body that would satisfy both FT and MFT users. To achieve this, Olympus had to build a new sensor with a hybrid autofocus system that incorporates both contrast and phase detection capabilities.

For those who are lost here, contrast detection is mostly used on compact and mirrorless cameras while phase detection is used on DSLRs. The main differences between the two, simply explained, are:

With MFT lenses and in AF-S mode, the camera will use contrast detection and any of the 81 AF points on the sensor. In this mode, the difference compared to an E-M5 or a Pen E-P5 is less noticeable. Even though the E-M1 has far more focus points (81 vs 35), I didn’t find any substantial differences. The E-M1 seemed slightly more accurate in low-light situations and slightly faster with the new M.Zuiko 12-40mm f/2.8 attached. During our ISO comparison, I noticed that the E-M1 hesitated less in focusing in a couple of scenes we chose to photograph (both cameras had the same 12-40mm lens).

In AF-C mode with the 12-40mm f/2.8, the E-M1 responded very well. Heather took various sequences and none of them were out of focus.

But to really test and challenge the AF, I wanted to use telephoto lens and ask the (near) impossible of the camera!

With Four Thirds lenses, the E-M1 will only use phase detection, regardless of the AF mode chosen. There are 37 phase detection AF points present in the middle of the sensor. The position of those AF points is important to know as you will get better results if your subject remains on the centre of the frame, rather than on the extreme left or right. That can seem obvious for the frame composition but often we like to position our subjects slightly to the left or right side of the centre. However, if you go too far to the edge, you risk focusing outside of the phase detect point zone.

At Castle Leslie, I had the chance to perform a series of high speed shots of horses running through a lake. When I arrived on the other side with a boat and stepped on the dock, one of the Olympus representatives told me I could choose any FT lens I wanted. As soon as I laid eyes on the 300mm f/2.8, I thought:

Well, if I only have a couple of shots, why not try the AF-C with the most extreme telephoto lens available!

When I mounted the big lens, I was surprised by the build quality and robustness of the new MFT adapter. I also really enjoyed the re-designed ergonomics of the E-M1 and its battery grip when shooting with this lens.

Olympus has managed to design a small camera with perfect ergonomics that will please the user regardless of whether he or she uses small MFT lenses or bigger FT lenses.

I had the opportunity to use the 300mm for two rounds. The E-M1 was set to AF-C, L burst mode and shutter priority at 1/6000. In Low burst mode, the E-M1 gives priority to focus rather than speed so it is always important to select L instead of H, as H will give priority to speed and lock the focus point at the beginning of the burst.

The 300mm f/2.8 (600mm equivalent on 35mm format) was slightly too long for my position and the relative distance to the horses, so I knew that I was challenging the AF from the start.

I admit that I am not used to shooting with extreme telephoto lenses like this one, and I also decided to shoot hand-held to complicate things even more so forgive me if some of my pictures below are poorly composed.

So as to capture the most important moments of the run, I decided not to perform continuous shooting but rather shoot in short bursts at intervals.

During the first round, I released the first burst as the horses came out from behind a tree.

In the first four images, both riders are slightly blurry if you look at the pictures at their full size. It seems that the AF didn’t lock precisely enough on the rider on the left. The focus point is slightly behind them.

In the second sequence, I waited to have them closer to me and released the second burst.

Both the first and second sequences seemed in focus to me when I reviewed them on the E-M1’s LCD, but once on the computer, I noticed that this wasn’t exactly the case.

I briefly stopped shooting, changed my composition to focus on the horses’ hooves and started shooting once again. This time the AF locked on quickly and perfectly.

I then concentrated once again on the riders as they were much closer to me now. This is the part that gave me a very positive impression. The closer the riders came to me, the better the AF followed them.

As you can see, in the last three pictures, despite the number of water drops, the camera still managed to focus properly.

In the second round, I didn’t manage to get any good examples as I started to focus too close to the right edge of the frame  – most of the pictures came out blurry, as the camera didn’t manage to recover the focus point except for the last shot, when again the horse and rider were closer to me. Moreover, the metering system didn’t work well as it underexposed the images by choosing a slower aperture.

The continuous autofocus is quick to lock but can be slightly inaccurate. That said, the camera has some settings specific to AF-C and FT lenses. You can set the reactivity of the C-AF lock and also specify which lens data to use since the camera includes all MFT and FT lens information in its internal database. The database is also editable if you find that the results are not 100% accurate. So I’m sure there is margin for improvement from this point of view.

I admit that this first test doesn’t conclude anything but only suggests what the E-M1 can do in terms of AF-C with a FT lens. Obviously, more tests are needed with other FT lenses in various situations to come to any real conclusion. From what I shot, I certainly see the potential of the camera and the close-up pictures came out really well.

At this point there were only two rounds left to photograph, and since I also had the Lumix 35-100mm f/2.8 with me, I switched lenses to perform a different test…

In AF-C mode, the camera uses a mix of contrast and phase detection with MFT lenses. I changed my position and tried my Lumix 35-100mm. I was very curious to see how the E-M1 would perform with a Lumix lens.

When the horses were far away, the AF-C worked great as the difference in focus distance was minimal. When the riders turned and started to run faster, the E-M1 performed well for the first shots then lost the focus completely. I zoomed out to keep the two riders in the frame and the camera immediately managed to recover by 90%. My guess is that in the second picture below, my two subjects were too far from the centre and the camera lost its reference. I used a single focus point only instead of a group of AF points so this could be an explanation. It also didn’t recover the focus quick enough as the movement of the horses became very rapid.

The second round came out almost perfectly. I decided to use a shorter focal length from the beginning and this seemed to help. Only the first and the seventh shots are slightly out of focus.

We didn’t have more time to shoot horses, so during some free time before dinner, I did an additional test using my beloved Heather as my running model. I wanted to test the AF-C mode with another “extreme” situation.

The test was simple: Heather running towards me (over and over again!), starting at around 15 meters away, with the lens set at its longest focal length (100mm).

In my opinion, the results are very interesting. The last “green” picture was taken when Heather was only a few meters away from me and the camera still managed to quickly compensate after the previous blurred picture. Of course, when Heather came too close, she became completely out of focus.

I also did a test with AF-C Tracking to see if I could see any difference. Tracking is more suitable with subjects that move in random and less predictable directions.

In this second example, the last pictures are all out of focus but in this case, the camera managed to track the focus much better when Heather was closing in on my position. The last three pictures especially aren’t as blurry as the previous test.

As you can see from the thumbnail previews, there are quite a few out-of-focus pictures. Again, this test was extreme as I used a subject running quickly towards me from a close distance, and a 200mm equivalent focal length would challenge any autofocus system, so my guess is that the OM-D E-M1 performs well. I will need to do more tests with Olympus and Panasonic lenses to write a proper conclusion about this specific topic.

Those tests were too brief to jump to any real conclusion, but I can clearly see an improvement over the OM-D E-M5 regarding AF-C. The most noticeable aspect is the improved speed when the focus changes rapidly, or when the camera tries to “catch-up” after starting from a blurred image. In any case, where the E-M5 would have probably “given up”, the E-M1 is faster at recovering and adjusting, giving you at least a couple of sharp pictures. Again, I will need to do more testing to evaluate its efficiency and understand how close it can get to the best AF found on DSLRs.