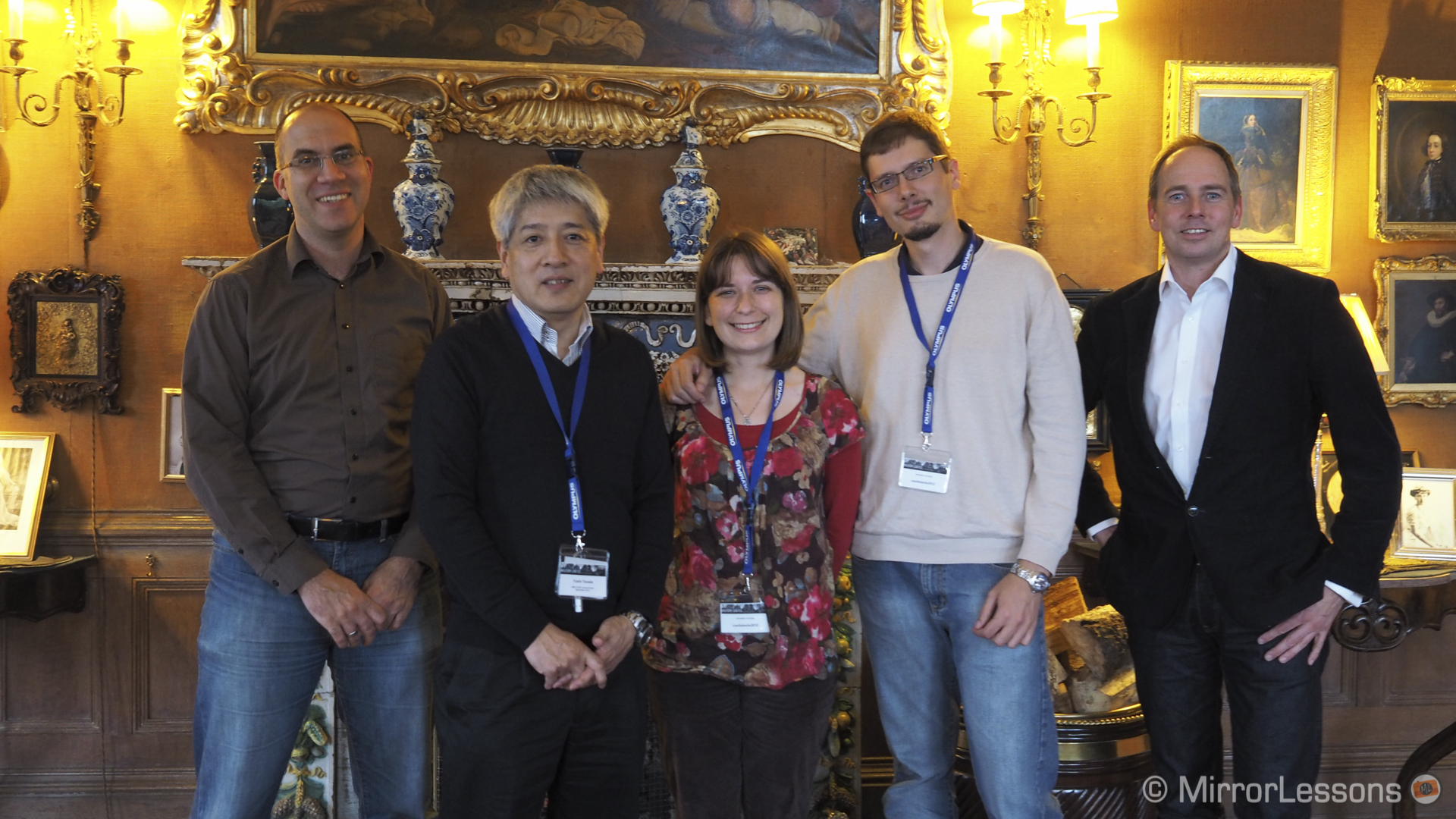 During our wonderful stay with the Olympus team at Castle Leslie in Ireland, Olympus managers Toshiyuki Terada (Deputy General Manager), Jörn Fandrey (Department Manager, Marketing Communications) and Michael Guthmann (Product Manager) were kind enough to fit in an informal interview with Mathieu and me just before dinner. Sat in one of the many cosy sitting rooms in the main castle building, we put a series of questions to the managers, excited to discover more about the new OM-D E-M1 and the M.Zuiko PRO lens line-up, and what the future holds for Olympus.

Mirrorlessons: The first question is rather basic: do you plan to release a silver version of the E-M1?

Terada: No, there will only be a black version.

Mirrorlessons: I have a question about video. Reading a lot of forums and user opinions, they always ask why there isn’t a better codec for video and why that part hasn’t been developed for professionals.

Tereda: We are concentrating on priority matters, specifically establishing nice still image quality. This is our priority as a camera manufacturer and our reputation on the market is for still. So, that’s one of the reasons. But there is another matter because even if we go in the direction of video, Panasonic already has really nice MFT cameras for video. We like to show the total possibility of the entire MFT line-up, and if we start to focus on video capabilities, it may be misleading to the market. They may think that MFT is only suitable for video and we don’t want to give that impression.

Mirrorlessons: Regarding the lenses, now that the E-M1 can work with both FT and MFT lenses, what’s going to happen with the next lenses you design. Now there’s a new PRO line like the 12-40mm and the 40-150mm. Do you plan to release other PRO lenses after these two, or are you going to let people choose from the MFT and FT lenses already available? Or are you going to redesign some FT lenses for MFT?

Tereda: With this new camera, we established the new MFT line-up from Olympus called M. Zuiko PRO. We have announced two lenses to date, but we are planning to develop at least two additional lenses. One is the wide zoom lens and there is also the super tele-lens. Both are in the PRO category. So, we promise to establish the MFT lens line-up at the quality of the current PRO line-up. This is our message to the market that wants to buy the E-M1.

On the other hand, FT lenses are still very much alive because once we introduce this camera, everyone can use them in the same manner as you would with a FT body. But we have no plan to make new FT lenses because we have already established a very nice PRO lens line such as the super telephoto … did you try it today?

Mirrorlessons: Yes, I tried the 300mm. It was really nice.

Tereda: Yes, now it’s really nice. Not only from an AF point of view but if you see the image quality, I think this is the best Olympus image quality together with a FT lens. So now we have a very broad lens line-up of not only MFT but FT as well.

Mirrorlessons: Will there be an E-M5 successor? Do you have some specifications or information to share?

Mirrorlessons: So will there be a successor to the E-M5 eventually?

Mirrorlessons: This is maybe a more sensitive question. There have been some articles explaining that mirrorless cameras in general have poor sales especially in Europe and America whereas in Japan, Korea and China they are doing fairy well. If this is true, why do you feel the sales are not very good?

Tereda: One thing we always say is that Japan and the Asian people like to have new things. Americans and Europeans tend to be a bit more conservative. We are expecting this. On the other hand, we strongly promote, especially in the Japanese and Asian market, cameras designed for the young generation with a focus on young females. However, we can see the potential in Europe now that so many females enjoy photography and post pictures on social networks. We tried to test the market potential in Paris once with the Pen camera where we had a touch-and-try show in the centre of the city. So many young ladies came to the event and they tried the camera and everybody said that it was really nice. But still these women have no strong buying power, that is, the income is low. However, we clearly see the possibility – they love photography and they love the Pen camera. If we can clearly see the target user, I am sure we can convince Europe and America.

Fandrey: Actually, we are now getting feedback from really convinced SLR users who once said “this is more toyish” or “this can’t compete with SLRs.” They are actually starting to change their minds. So, we now see a lot of professional and ambitious people starting with the E-M5 and E-P5. I think this is a good sign for Europe.

Tereda: Also, another thing we’re really counting on is the OM-D business in Europe. The E-M5 has a good reputation and we are expecting the same for the E-M1. This could actually influence entry-level users (Pen users) because normally new users or those who switch from compacts to MILC, have no idea or knowledge about which is the best camera or which would be the most suitable camera for them. They ask knowledgeable people. So if we can influence the influencers with the OM-D, then they may in turn recommend the Pen to entry-level users.

Mirrorlessons: So, what does 2014 hold for Olympus? What can we expect?

Tereda: Next year, we will increase business with the E-M1. We will develop some nice new lenses. This is one essential for our imaging company. Our other goal is, as I said, to influence entry-level users with this camera. That is one reason we concentrated so much energy on the top-end model. Its quality and reputation will influence the entire imaging world I think.

Mirrorlessons: Last question. Maybe this isn’t easy to answer now but, having used full-frame cameras and APS-C cameras, I am always really impressed by how far a MFT sensor can go in terms of ISO performance and IQ in general. Do you think there is still a lot to improve on the MFT sensor in years to come with the introduction of new technology?

Tereda: We don’t want to catch up with the FF sensor business because it is a totally different market. Of course, it’s really wonderful to achieve nice image quality because of the very big image sensor and lenses. You can enjoy shallow depth of field and good image quality in very dark situations. On the other hand, the MFT product is very capable of balancing of image quality with easy handling and portability. In fact, we have already achieved the same or even better image quality than APS-C cameras. I think we can now fight on the APS-C market with our OM-D and Pen line-up. My personal estimation in the future is that the interchangeable market can coexist with the FF sensor market. This is our target direction.

I also feel that the balance of portability and IQ is what puts MFT above APS-C. The image quality is almost the same but the portability is totally different. Then, if you compare the lens size – DSLR, APS-C, and mirrorless APS-C – their lenses are much bigger than ours. I don’t think everyone will go to FF; only those who really need it will. But many journalists say that the E-M1 covers a lot. Somebody said 99% can be covered.

Guthmann: Even top professionals are tending to go with medium format cameras for those real high quality shots while choosing mirrorless cameras from MFT to create spontaneous shots because they are lightweight, better to transport, and do not look so professional. This is an important point because you can shoot images which were not possible before because you needed permission to shoot. With this camera, you can just make images and nobody recognises that you are shooting in a professional manner. This is why many professionals are thinking about having a medium format camera for the really high end jobs, skipping FF altogether, and just using MFT camera for spontaneous jobs.

Fandrey: Regarding the idea of not looking professional with MFT, if you look at the E-M1 especially with the battery grip attached, wouldn’t you say that it looks professional? If you were afraid of not being taken seriously before, I think now you are fine now.

Mirrorlessons: Thank you very much for your time!

Be sure to check out our E-M1 first impression review concerning low light performance in comparison to the E-M5.