You are here: Home / Olympus Camera Reviews / Using Four Thirds lenses with the Olympus OM-D E-M1: When are they suitable? 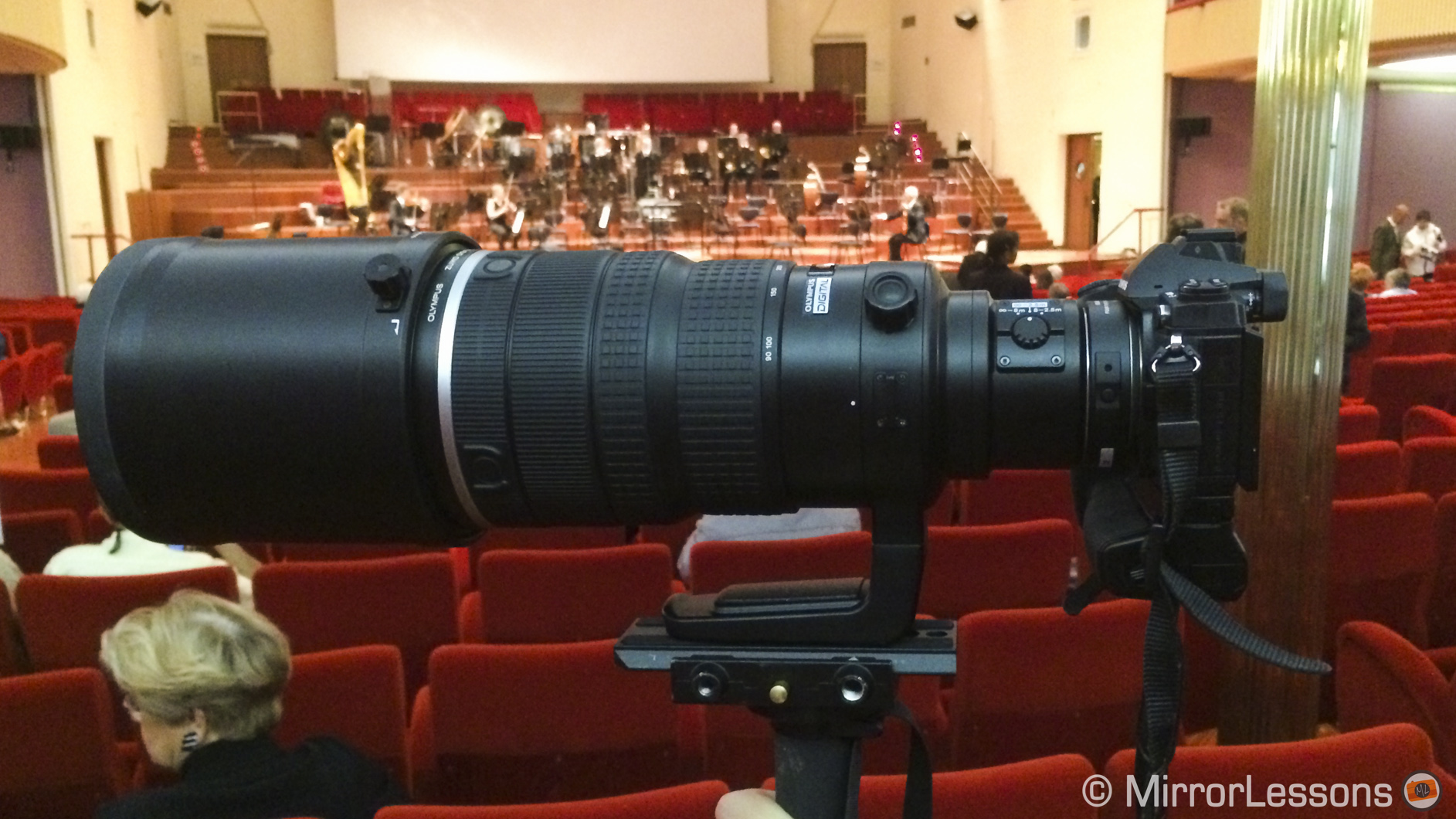 With the release of the flagship OM-D E-M1, Olympus put a definitive end to its Four Thirds DSLR line and a stop to rumours predicting a new model, the E-7. The main reason is because the E-M1 and its new autofocus system is capable of handling both MFT and FT lenses. As such, the company decided to take a risk and pour all its efforts into the MFT system.

I had the chance to briefly test the E-M1’s AF capabilities with the Zuiko lenses last year at Castle Leslie and my first impression was positive.

Since then, I’ve been waiting for the chance to have a closer look at its performance in a real world situation. The opportunity came last week when the Turin Cinema Museum asked me to shoot a concert taking place inside the RAI (Italian national television) auditorium. They ask me to take close-ups of the conductor and other musicians in addition to larger shots. Being limited in mobility and having to remain at a certain distance from the musicians, I needed a fast super telephoto lens to capture what I wanted.

These kinds of lenses are not yet available for the native Micro Four Thirds mount so I asked Olympus if it was possible to try a couple of Zuiko lenses. They kindly sent me the 90-250mm f/2.8 (180-560mm equivalent) and the 150mm f/2 (300mm equivalent). Two big heavy DSLR lenses but with amazing image quality.

Olympus has a series of very interesting Four Thirds PRO lenses such as the 14-35mm f/2 and the 35-100mm f/2. The 150mm has been rated one the best Zuiko lenses ever made.

Since I didn’t know exactly how close I could get to the orchestra, I asked for the versatile 90-250mm f/2.8. The 150mm f/2, on the other hand, was interesting for its extra fast aperture as it proved useful in critical light conditions.

As I mentioned, the two lenses are very big, especially the 90-250mm. Its size is very similar to the super bright telephoto lens photographers use for soccer games or car races. Now that I am used to the small size of mirrorless lenses, I had almost forgotten what it was like to carry such heavy gear. But I’ll admit that for one night, it was fun and I enjoyed it.

I used the lenses with two MMF-3 adapters that ensure the best results for autofocus. I also used the vertical battery grip to make the whole combo more comfortable to use and I had a Manfrotto monopod to increase my stability.

Note: make sure to have installed the firmware version 1.4 at least because it improves AF with Four Thirds lenses.

I also brought along the Pen E-P5 and used it as a second body with the 12-40mm f/2.8 for the large shots like the one below.

The scene was difficult to shoot because of the poor lighting conditions. The orchestra played the music during the screening of the most famous Italian silent film called “Cabiria”. With the exception of the introduction, once the movie started the only lights on the orchestra were the little lamps over the music scores and the reflections from the screen. It was a difficult situation for the E-M1 and its Micro Four Thirds sensor. I wouldn’t have been able to achieve these results without these fast Zuiko lenses. My only option would have been compact zooms with non-constant aperture values such as the Lumix 100-300mm f/4-5.6 or the M.Zuiko 75-300mm f/4.8-6.7 and I would have had to increase ISO levels too much.

Overall, the autofocus with Four Thirds lenses works well but isn’t as fast as with Micro Four Thirds lenses. There is more hesitation and back and forth movements of the inner mechanism. At the beginning when I wanted to catch a quick shot of the conductor greeting the public, the AF struggled more than once and I missed the first occasion. I managed to get my shot afterwards but the AF isn’t as reliable as with my MFT lenses. Granted, it wasn’t an easy condition for the AF.

Also, when FT lenses are mounted with the MMF-3 adapter, only the phase detection sensors (that are in the centre in a rhombus formation) are used. This means that you are more limited in moving the AF points around the screen if you want to focus on something on the side and not in the centre of the picture. Of course you can use a centre point, pre-focus and then re-compose.

I would have loved to use these lenses in other situations and take advantage of having them for a week. Unfortunately, other jobs got in the way and the bad weather throughout the week didn’t help either.

However, I can certainly contribute my two cents regarding the use of Four Thirds lenses with the Micro Four Thirds system.

Are they worth using in this day in age? 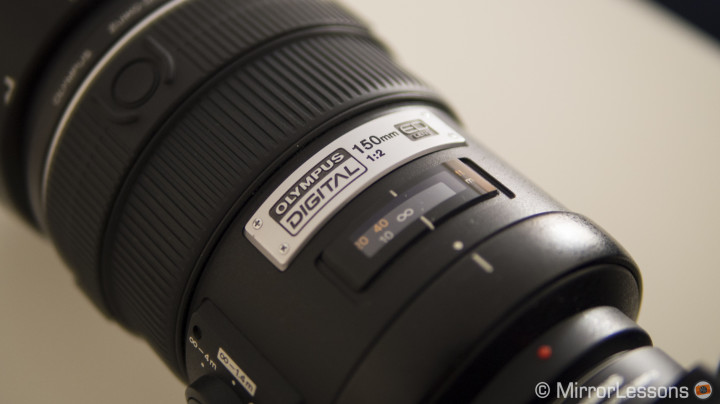 I think there isn’t a definitive answer to that question. Certainly those who already own Zuiko lenses and shoot with Olympus DSLRs might find it convenient to switch to the new camera while keeping the lenses they invested in, and eventually sell a few to get smaller MFT alternatives.

From an enthusiast photographer’s point of view, there are a few lenses that are very interesting at a reasonable price. For example, the 50-200mm f/2.8-3.5 gives you the equivalent of a 100-400mm (full frame format) while maintaining a decent aperture, even if it isn’t constant. There is also the 11-22mm f/2.8-3.5, a good wide angle alternative to the Lumix 7-14mm that costs even less (of course you have to add the cost of the adapter unless you already own it).

From a professional point of view, I think that only very specific lenses are interesting but might not be worth the investment, unless your job requires the use of extreme telephoto lenses on a daily basis. And if that is the case, I am not sure that a MFT body + FT lens is the best option anyway.

As for the other lenses, the most common focal lengths can now be found in smaller and lighter MFT versions, so you can take full advantage of the system for both its size and performance (better autofocus).

That being said, it is also worth mentioning that the fact these FT lenses exist can be of great benefit when you need to use them. They increase the already vast choice of lenses available for the MFT system – really, there is almost nothing missing. Of course without a camera store nearby that can rent them to you for a couple of days, it might be tough to get your hands on them. I rarely need these long focal lengths but if I ever do, I know that my camera will work fine with them. Renting and adapting a Nikon or Canon DSLR lens and working with manual focus can remain an option but as we’ve seen, not the only solution.

I am sure many wish to one day see some of these Zuiko lenses re-designed in a smaller form for the Micro Four Thirds system. Actually, it seems this might already be happening since a 7-14mm f/2.8 is in the works as well as the 40-150mm f/2.8 and 300mm f/4. I’m sure we will see them at Photokina in September 2014.

Enjoyed this post? Then be sure to check out the following: