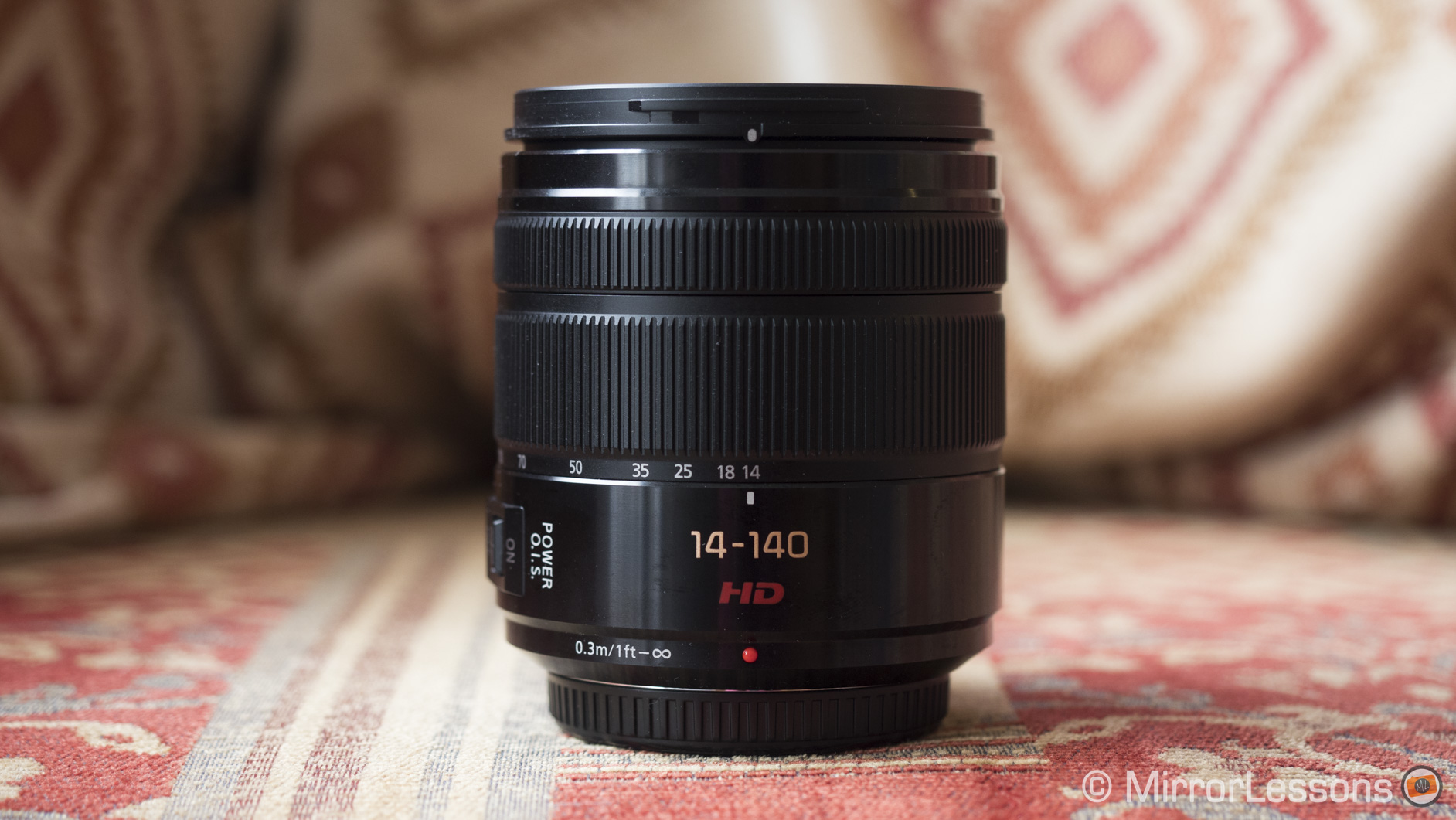 As we’ve said many times in previous reviews, all-purposes superzooms tend to be designed less to deliver top optical performance and more for versatility and convenience. Indeed, it is unlikely you’ll miss a shot due to having the wrong focal length but you’ll be faced with limitations such as a slowish aperture, lack in sharpness, or less pleasant bokeh.

At the shortest focal length (14mm), you have access to all the apertures between f/3.5 and f/22. As you extend the zoom toward the telephoto end, you lose some light. Once you reach the longest focal length (140mm), the fastest aperture becomes f/5.6.

The lens body is constructed of high-quality plastic and features a ribbed zoom and focus ring. Both are pleasant to use and precise, even if the latter is fly-by-wire. You won’t find aperture markings on the lens, so you’ll have to rely on the monitor or EVF to see your aperture value. 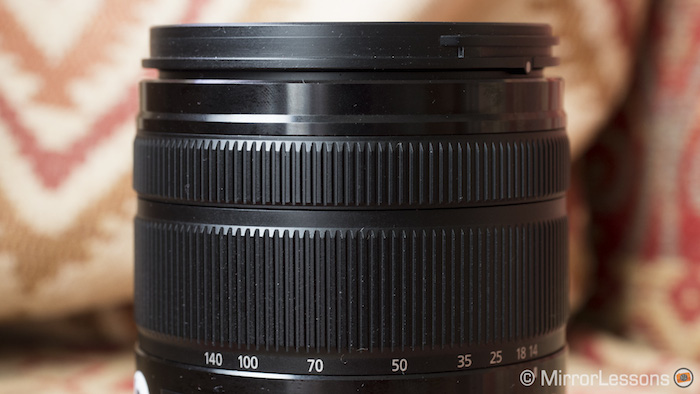 On the side, you’ll find a Power I.S switch that lets you activate or deactivate the optical stabilisation of the lens. 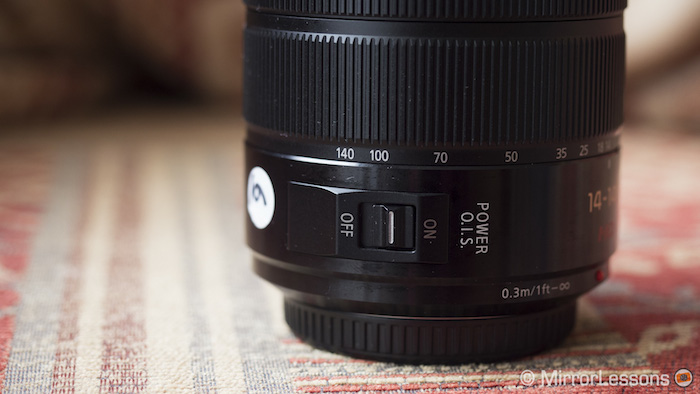 The 14-140mm comes with a plastic petal-shaped lens hood that reverses onto the lens for storage purposes. It also accepts 58mm front filters. 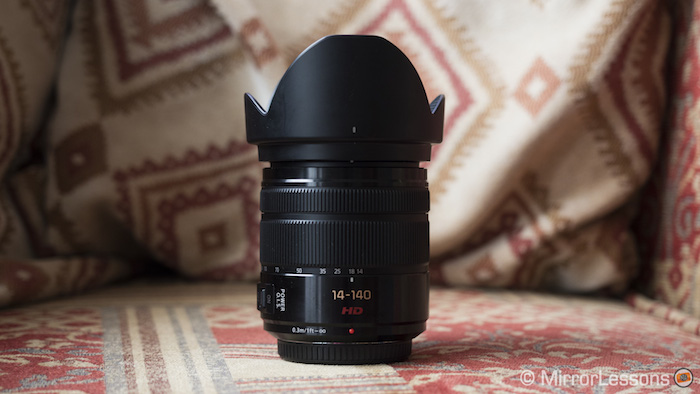 Considering the wide focal range this lens covers, one can’t really complain about the sharpness. Sure, it isn’t as good as an expensive fast prime but remains more than enough for casual photography.

Regardless of the focal length, the lens is at its most useable at f/8. On the wide end, the performance peaks between f/5.6 and f/11 whereas the best performance can be found between f/8 and f/11 at the extreme telephoto end. The only aperture that is noticeably soft is f/22, though diffraction does begin to set in at f/16.

Below are a few examples that demonstrate the sharpness of the lens at various apertures and focal lengths.

In S-AF mode, the 14-140mm f/3.5-5.6 is very quick in good light and only slows down a little in poor light conditions or when zoomed out to the extreme telephoto end. It is also perfectly silent thanks to the internal focus mechanism, which is a big bonus for video shooting.

To test the lens in a more extreme environment, I also used it alongside the 35-100mm f/2.8 on the Lumix GX8 at the Wales in a Day cycling event. I positioned myself on a decline so as to capture the cyclists at their fastest, and used the two most efficient AF modes on the GX8, Custom AF and Tracking with C-AF activated.

I noticed that the closer the subject got, the more difficulty the lens had tracking the subject. At the same time, it was encouraging to see that the lens was often able to regain focus after a couple of missed shots.

The inconsistencies in autofocus performance cannot be completely blamed on the lens. The fact that the performance of the 35-100mm isn’t perfect either implies that the Depth from Defocus AF system of the GX8 can still be improved for high-speed action, which is something that can actually be said for most current mirrorless systems.

I admit that I didn’t do much manual focussing with this lens, but from what I can tell, it is accurate despite being fly-by-wire. The ribbed focus ring is smooth and easy to use for both stills and video work. You can take advantage of your camera’s magnification and focus peaking functions to adjust your focus with precision.

As you may know, the GX8 is the first Lumix camera to incorporate a Dual I.S. system whereby the camera’s 4-axis in-body stabilisation works in tandem the 2-axis optical stabilisation of certain Lumix lenses. On our tests with the 35-100mm f/2.8, we found Dual I.S. to be just as effective as the 5-axis IBIS of the Olympus OM-D E-M1. The 14-140mm is also compatible with Dual I.S. but, like the 35-100mm, requires a firmware update to work.

For this review, I wanted to test both the optical performance of the lens on its own and with the Dual I.S. of the GX8.

At 14mm and with the optical stabilisation activated, it is generally possible to take truly sharp shots down to 1/8s and sometimes even slower if you steady. The decrease in performance seems congruent with the length of time the shutter is left open.

When you zoom out to 140mm, it is possible to take sharp shots down to about 1/20s. However, I noticed in both the shots I took during my casual excursions with the lens and those from my dedicated stabilisation tests that the GX8 produces some slight shutter shock between 1/80s and 1/250s. It decreases at 1/320s and completely disappears by 1/400s.

The shutter shock issue at around 1/160s has been reported by many Micro Four Thirds users but this is the first time it has so notably affected my images. Thankfully, there is a solution in the form of the GX8’s Silent Mode, which takes the vibration of the shutter out of the equation. With the Silent Mode activated on the GX8, I can take sharp shots down to 1/20 and sometimes even lower if I’m really stable.

After updating the lens with the latest firmware, I was able to use Dual I.S. (both in-body and optical stabilisation).

My first test was performed at 14mm with the mechanical shutter. To my surprise, the results I achieved with the Dual I.S. weren’t much better than with just the O.I.S of the lens. In general, I was able to achieve perfectly in-focus shots down to 1/6s, whereas all the shots taken between 1/5 and 0.5s were only slightly blurry. I had similar results with the silent shutter as well.

Zooming out to 140mm, there were still signs of shutter shock at the critical shutter speeds with the mechanical shutter. This was once again eliminated by using the silent shutter. Interestingly, I actually struggled to get sharp shots below 1/30s with both the mechanical and silent shutter. This would suggest that, with this lens, the Dual I.S. doesn’t seem to provide any real benefit over O.I.S. on its own at the longest focal lengths.

On a closing note, it is important to remember that the results you achieve highly depend on how stable you are. This can be influenced by the cold, your ability to keep a steady hand, and whether you’re propped up against something that can give you some extra stability. For example, I managed to take the shot you see below at 1/3s (Dual I.S.) because I was crouching down and using my knees as a pseudo-tripod. It required a few attempts but it was possible.

A nice feature of the 14-140mm is its semi-macro capabilities. You can focus as close as 50cm, giving you 0.4x magnification. As you can see in the shot above, the medium-sized butterfly fills much of the frame at 140mm, and the out-of-focus rendering isn’t bad either. Of course, given the slow-ish aperture of f/5.6 at 140mm, it will always be a challenge to render a nice bokeh.

Helpful tip: For budding macro enthusiasts looking for an affordable solution to use with this lens, I would highly recommend the Raynox 250 adapter. You can read our full review here.

Let’s be clear: nobody is going to buy this lens (or any multi-purpose lens) for its bokeh. That said, you can get a fairly pleasant out-of-focus rendering if you use the longest focal lengths and focus as close as possible. In all other cases, the widest apertures simply aren’t fast enough to completely melt the background away.

The amount of vignetting depends on a combination of the aperture and focal length. At 14mm, it is only noticeable at f/3.5 and f/4, all but disappearing by f/5.6. By the time you reach 140mm, it becomes visible at f/5.6 and f/8. On the whole, vignetting is very mild and can easily be corrected in post production.

Flare is very well-controlled. Even when you shoot into direct sunlight, the only sign of flare is some slight ghosting around the light source. This is certainly helped by the presence of the petal-shaped lens hood.

There is some distortion at the widest angle (14mm) but this all but disappears once you begin to zoom in. Once again, this can be corrected in post production with the click of a button.

There isn’t much more to say about the Lumix 14-140mm except that it is very good value for the money. Not only is it light, solid and portable but it covers a range of focal lengths so vast that you’d be unlikely to miss a shot for this reason alone. Couple this with the built-in optical stabilisation and you have a great walk-around lens for your day-to-day photography or videography.

Sure, it has its pitfalls, including a less than stellar autofocus performance, average sharpness and an aperture that doesn’t go faster than 3.5, but it would be unreasonable to expect this lens to compete with the quality of very fast primes or high-end constant aperture zooms.