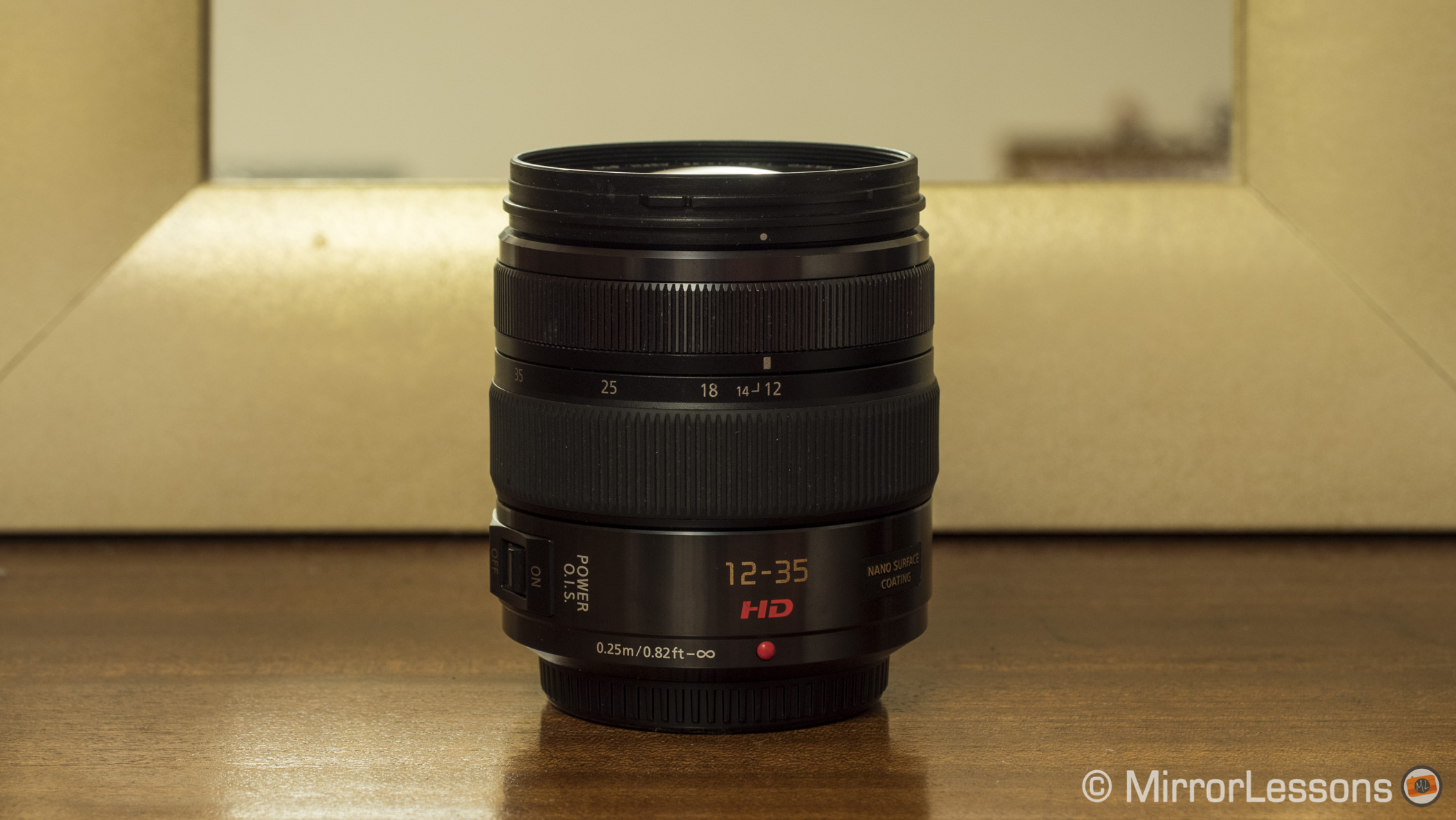 Following two very wild weeks of incessant storms and gale-force winds, the Welsh weather now seems to have reverted to its “ordinary” self, which basically means a healthy mix of sun, cloud and rain. A good thing too, as otherwise I probably wouldn’t have been able to finish my review of the Lumix 12-35mm f/2.8 – the risk of being blown out to sea was too great! 🙂

The Panasonic Lumix 12-35mm f/2.8 is a standard constant aperture zoom that is extremely popular with Micro Four Thirds photographers, amateur and professional alike. Mathieu used it briefly for an assignment when he was working at the National Cinema Museum in Turin and once again at a Panasonic event at Erddig Castle last summer, so this marks the third and longest period we’ve spent with the lens, and I have to say it’s lived up to its reputation.

Seeing as we also own the M.Zuiko 12-40mm f/2.8, the Olympus equivalent of the 12-35mm, I’m also in the process of completing a comparison between the two zooms, so be sure to watch this space!

The Lumix 12-35mm (24-70mm on full-frame) is a standard zoom with a relatively fast constant aperture of 2.8, making it appropriate for a vast range of purposes from landscapes to environmental portraits to street. For those curious about the nitty-gritty technical specs, it has fourteen elements in nine groups including four aspherical lenses, and seven aperture blades.

Perhaps the most surprising aspect of the 12-35mm’s design are its size and weight. Even though it has a constant f/2.8 maximum aperture, it is a mere 8cm long and weighs only 305 grams. Since the zoom mechanism is external, the length extends to 10cm when you zoom out to 35mm.

The barrel and mount of the lens are both made of metal, while rubber and plastic are used for the ribbed zoom ring and petal-shaped lens hood respectively. Happily, it is both dust and splash proof, so you can use it with weatherproof cameras like the GH4 or GX8 without any worries.

Otherwise the barrel is quite minimalistic. In addition to the ribbed rubber zoom ring, which is marked with the most important focal lengths, there is a slightly smaller focus ring. It is fly-by-wire but don’t let this put you off – it is very accurate and works well with manual assists such as peaking and magnification on cameras like the GX8. You won’t find a distance scale or a focus limiter but there is a sturdy switch that lets you activate or deactivate the lens’ Power O.I.S. (optical stabilisation). It features a 58mm filter thread, so using an ND filter with this lens is a valid option.

All things considered, the build and design of the Lumix 12-35mm leave hardly anything to be desired. Were I to be really fussy, I could complain about the lack of a manual focus clutch mechanism similar to the one on the M.Zuiko 12-40mm, but it isn’t a deal-breaker.

Image Quality – Through the lens

Looking at both my series of test shots and the images I took out in the field, I would say that centre sharpness peaks at around f/4 at 12mm, though f/5.6 and f/8 perform is a very similar manner. As for the corners and edges, I would declare a tie between f/4 and f/5.6. Although the fastest aperture of f/2.8 is very useable in both the corners and at the centre, it is a little softer than f/4 at 12mm. As could be expected, anything taken at f/16 and beyond is too soft due to diffraction.

The playing field evens out a little more as you zoom in to 35mm. While the difference is minute, it appears that the fastest aperture of f/2.8 is ever so slightly sharper than f/4. In fact, all the apertures between f/4 and f/11 perform in a very similar manner, and it is only once you hit f/16 that the performance noticeably decreases. Sharpness at the corners and edges is also very good from f/2.8 up to f/11, with hardly any difference in performance between the apertures.

The Lumix 12-35mm may lack the sharpness of some Micro Four Thirds prime lenses but it is a very good all-round performer at the most important apertures, which is all we can and should expect from a standard zoom like this.

To see a full set of high resolution shots taken at all the apertures, be sure to check out our SmugMug gallery!

I was pleasantly surprised by the bokeh of the Lumix 12-35mm. By zooming in to 35mm and standing at the minimum focus distance of 25cm, you can achieve a smooth and creamy out-of-focus rendering with round specular highlights at the centre.

Chromatic aberration didn’t pose a problem in any of my images except in the most extreme cases. A good example is the image below where I purposely shot directly into the sun. It also made an appearance in some contrasty images shot at f/2.8. As always, chromatic aberration can be easily removed in post-production.

The presence of flare should be of no surprise to Micro Four Thirds users. Although the petal-shaped lens hood helps to block sunlight that comes from an angle, it appears in various forms when there is a direct light source in the image. The most frequent kinds of flare I came across were purple streaks and rainbow flare.

That said, it isn’t severe and can easily be eliminated simply by adjusting your composition. In the case of the example below, all I had to do was lower the lens a couple of millimetres to block the invasive purple flare that appeared in the first shot.

Vignetting only appears at the fastest aperture of f/2.8 and it isn’t at all invasive. As always, you can remove it in post-production.

Since we are dealing with a standard zoom, it is normal for there to be some distortion, especially barrel distortion at the wide end. However, most of it has been corrected in-camera, so the final image you see in your post-production software should be perfectly acceptable. Happily, I did not see any relevant distortion at the longest end.

If you are looking for a weapon of stealth, the Lumix 12-35mm is an excellent candidate. Since it employs a quick and silent focusing motor, it is virtually inaudible when it focuses, making it a great companion for stills and video shooting. (To hear anything, you literally have to put your ear to the lens.) Pair it with a camera that has a silent shutter like the Lumix GX8, and there is little to no chance you’ll draw attention to yourself as you scour the streets in search of the perfect photographic opportunity.

Overall, focus accuracy is up to scratch in good light conditions. It is a little slower in poor light but still performs very well. There were only a couple of instances when the AF wouldn’t lock onto my desired subject – namely when I was trying to focus on something very small against a busy background.

Manual focusing is also a joy, although I only felt the need to use it for a few shots where the AF wouldn’t lock onto the subject. Even though it is fly-by-wire, I didn’t have any trouble making quick and accurate manual adjustments to my focus. Panasonic’s choice to surround the focus ring with ribbed rubber was a smart one; not only is it easy to turn but it never gets so cold that it is uncomfortable to touch in wintery weather.

The lens has decent close-focusing capabilities with a minimum focus distance of 25cm and a maximum magnification of 0.17x. It isn’t a macro lens by any stretch of the imagination but you can get close enough to isolate your subject and render a nice bokeh.

The Lumix 12-35mm has the benefit of optical stabilisation, named Power O.I.S. on Lumix lenses. In my experience, the efficiency of Power O.I.S. slightly varies from lens to lens, with high-end products like the Lumix 35-100mm performing a little better than all-purpose products such as the Lumix 14-150mm. The performance also depends on the focal length used, with shorter focal lengths delivering better results than longer focal lengths.

At the widest end of the 12-35mm, it is possible to achieve in-focus shots down to 1.3s, which is pretty spectacular for optical stabilisation on its own. Zoom in to 35mm and this becomes 1/10s or 1/8s if you are very steady.

If you own the GX8, you can update the lens to make it compatible with the camera’s Dual I.S. system. In my tests, there was a relevant improvement in the performance after the firmware update. At 12mm, I was able to take in-focus shots at speeds as slow as 1 second, putting the system on par with the 5-axis stabilisation system of the older Olympus OM-D models, while at 35mm, I managed to take sharp shots even at 1/3s.

As always, it is important to bear in mind that these results aren’t set in stone, and where one person might achieve results similar to mine, another could do better or worse. To make the most of the lens’ stabilisation, I would suggest keeping the camera as close to your body as possible to avoid arm shake and steadying yourself against something like a tree or pole.

The original price of the Lumix 12-35mm was $1300 or £999 but given the age of the lens – it was released in 2012 – it is unlikely you’ll have to pay that much these days. Keep your eye out for sales online or at your local camera store, and you’ll surely come across a good deal.

The Panasonic Lumix 12-35mm f/2.8 is a high-quality professional-grade zoom that fills an important gap in the Lumix lens line-up. Being a 24-70mm equivalent, it covers many of the key focal lengths you’d be most likely to use for well-loved genres such as landscapes, street photography, environmental portraiture, and events. In addition to its constant aperture of f/2.8, you have the advantage of a very sturdy yet lightweight construction, a quick and silent AF motor, weatherproofing, and very effective built-in optical stabilisation. In short, it embodies everything good about the Micro Four Thirds system.

Had I reviewed this zoom back when it was first released, there would have been only one thing that would have stopped me from recommending it: the price. It was too prohibitive for your average photographer, and would have been a big investment even for a professional. However, now that the lens can be found for less, it is well-worth considering if you have a penchant for constant aperture zooms. The only other Micro Four Thirds lens on the market that is as versatile is the M.Zuiko 12-40mm f/2.8, which is why I’ll be comparing the two very soon.