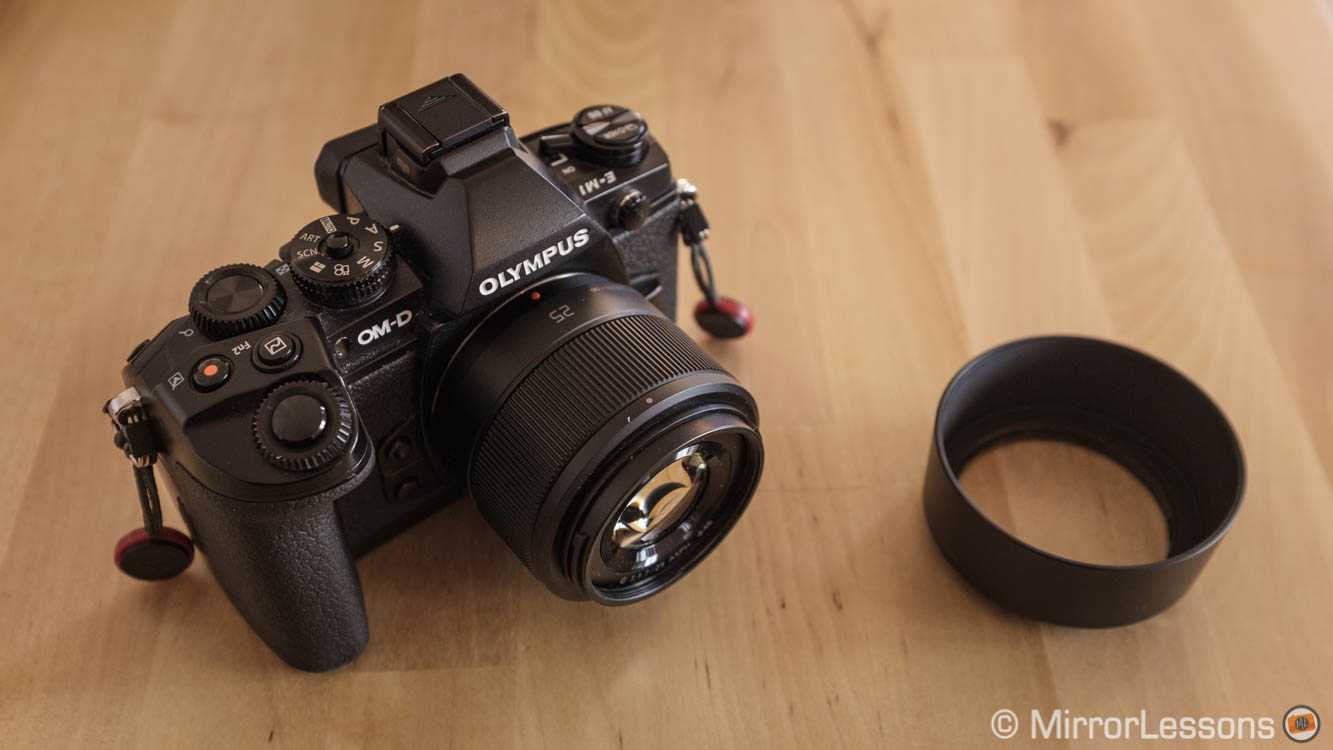 A permanent member in our collection of Micro Four Thirds lenses is the Panasonic 25mm Leica DG Summilux f/1.4. We spotted it second-hand at our local camera store in Italy and having very few lenses of our own at the time, immediately scooped it up. Over the years, it has proven a reliable companion for both work and casual photography thanks in no small part to its compactness and fast 1.4 aperture.

The lens we are reviewing today is the second 50mm equivalent (35mm format) prime from Panasonic, the Lumix 25mm f/1.7. It differs from its sibling in that it has a slightly slower aperture, a less robust construction and a more affordable price point. 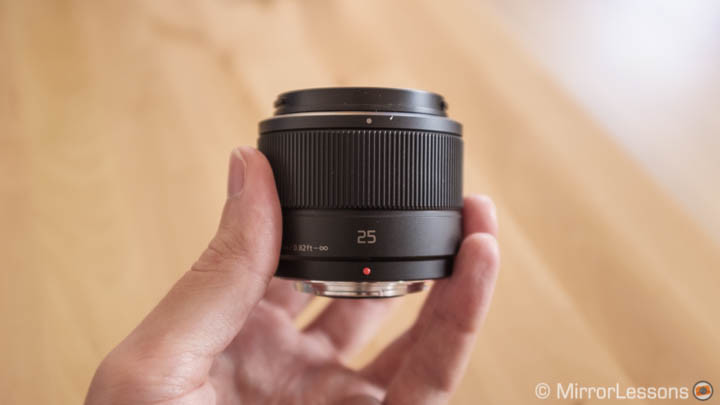 First, let’s get the official specifications out of the way. The 25mm f/1.7 ASPH has 7 diaphragm blades and 8 elements in 7 groups, one of these being UHR (Ultra High Refractive Index) and two being aspherical. Most of the barrel is made of plastic and it lacks weather resistance, neither of which is a surprise given the price. 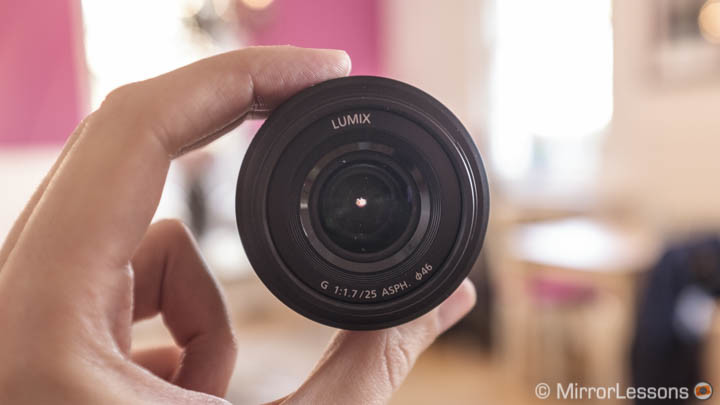 The barrel of the lens is surprisingly sparse compared to some other Lumix lenses. It features a plastic ribbed manual focus ring and a removable plastic ring which, once unscrewed, reveals the lens hood mounting groove. In truth, this plastic ring serves as nothing but a decorative item and isn’t very likely to get much use as you’ll want to use the included lens hood all the time to reduce flare. 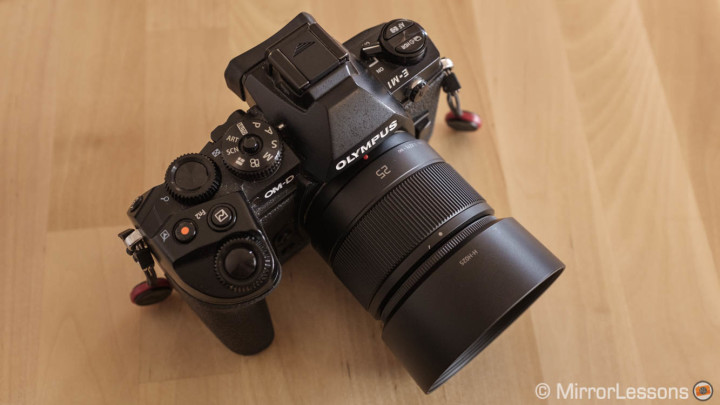 A characteristic that pleasantly surprised me when I removed the lens from the box was its lightweight construction. At a mere 125g and 52mm in length, this lens is so light and compact that you could place it inside your camera bag and not even perceive the extra weight. For the same reason, it does come across as somewhat more fragile than other more expensive MFT lenses, so it is best to avoid exposing it to the elements too much. I took it out in the light rain quite a few times but would have made a point to cover it in a downpour.

Image quality – Through the lens

Let’s start with sharpness since this is the characteristic that tends to attract the most interest. For the price, the 25mm f/1.7 is a very sharp prime and performs quite consistently through the apertures. As could be expected, it isn’t quite as sharp at its fastest aperture of f/1.7 as it is at f/2.8 or f/4 but it is still very acceptable. In the sample image below of a horse’s eye shot at f/1.7, for example, you can clearly see all the individual lashes. The same can be said for the details on the bud in the second example.

The best performance in the centre can be found between f/4 and f/8. From there on, sharpness gradually decreases due to diffraction. The only aperture I would consider unusable is f/22 due to excessive softness. Happily, the edges and corners are only marginally softer than the centre.

Even though the 25mm f/1.7 isn’t wide enough to be a proper astrophotography lens, I was eager to see how the fastest apertures would perform for this kind of photography as well. As it turned out, it was a third quarter moon so I did not really need the fastest apertures. However, I’m sure they could have come in handy on a much darker night. Below you can find an example taken at f/1.7, which is quite sharp. There is only some slight coma aberration in the corners.

Vignetting is very noticeable at the fastest apertures, so much that the entire image appears darker at f/1.7, but it all but disappears by f/4. One click of a button in Lightroom and this issue is easily solved. Chromatic aberration, on the other hand, appears almost absent. Even shooting tree branches wide open into direct sunlight revealed only very minor purple fringing. Distortion doesn’t appear to be an issue either.

Even with the lens hood attached, you will inevitably come across some flare in your images. It can vary in appearance, from the classic purple smudge to polygonal shapes. What’s more, the sun doesn’t necessarily have to be directly in your frame for it to appear. It is a shame that the hood doesn’t do more to mitigate flares but I can’t say I’m surprised given that most MFT lenses suffer from the same thing.

The 25mm has a very good close focusing capabilities of 0.25m with a maximum magnification of 0.14x. It isn’t a macro lens by any means but you can easily take some nice close-ups of flowers, shells or other objects that aren’t too tiny. Although I didn’t do much manual focusing with this lens, I found the focus ring particularly useful for close-ups as it allowed me to pinpoint my focus point with the help of focus peaking and magnification. It turns very smoothly and doesn’t require too many turns to go from infinity to the closest focusing distance. If you focus close, you can also achieve a smooth and buttery bokeh with round out-of-focus areas in the background.

As I mentioned at the beginning, the 25mm f/1.7 has a 46mm filter thread and it just so happens that we own the 46mm adapter for the LEE Filter system. With my Giotto tripod, LEE Little Stopper and the Lumix GX8 in hand, I decided to head up to Nant Gwernol (an ancient forest in Wales) to take some long exposures of the river. It was the ideal set-up – both lightweight and easy to carry on my walk through the woods. The only thing on occasion I missed was having a slightly wider angle of view.

Something that should be mentioned is that the Lumix 25mm f/1.7 is not stabilised, so you might have trouble using it at slow shutter speeds with non-stabilised Micro Four Thirds cameras if you don’t have a tripod. In my case, I used the stabilised Lumix GX8 and OM-D E-M1 and managed to take some handheld shots at shutter speeds as slow as 1 second with the latter. A good example is the one below taken inside Chester Cathedral. With the GX8, I managed to go as slow as 1/4s.

A final note is about the focusing. I used the lens on both the Lumix GX8 and OM-D E-M1 for a variety of genres and found that overall the focusing was fast, accurate and silent. The only time it ever struggled was with close-up shots if I used a focus point that was too large. This is a big step up from the 25mm f/1.4 which is both slightly noisier and slower to lock focus than the new version.

If you are just starting to build up a collection of Micro Four Thirds primes for your Olympus or Lumix camera and don’t wish to invest too much money, you really cannot go wrong with the Lumix 25mm f/1.7. The lens embodies nearly all the characteristics you’d like to see from a 50mm equivalent prime – a compact and lightweight build, a fast maximum aperture, great sharpness up to f/11, very little chromatic aberration, excellent close focusing capabilities with a pleasant bokeh, and of course, a very reasonable price. Indeed, if we didn’t already own the Lumix 25mm f/1.4, we would have certainly considered this lens for our own collection.

There are only two issues that could potentially prove bothersome: flares and the lack of stabilisation if you don’t own a stabilised camera body. The latter wasn’t a problem for us since we own the GX8 and E-M1 but a GH4 user, for example, might find it annoying. As for flare, there is little you can do except use the lens hood at all times and tweak your composition so that it dominates your image as little as possible.

You may be wondering why I haven’t said more about the similarities and difference between the two Lumix 25mm primes, and the reason is that I’d like to conduct a proper comparison over the weekend. Here’s hoping that the weather will be half as good as it has been over the past few days! (Update: the full comparison is now online!)